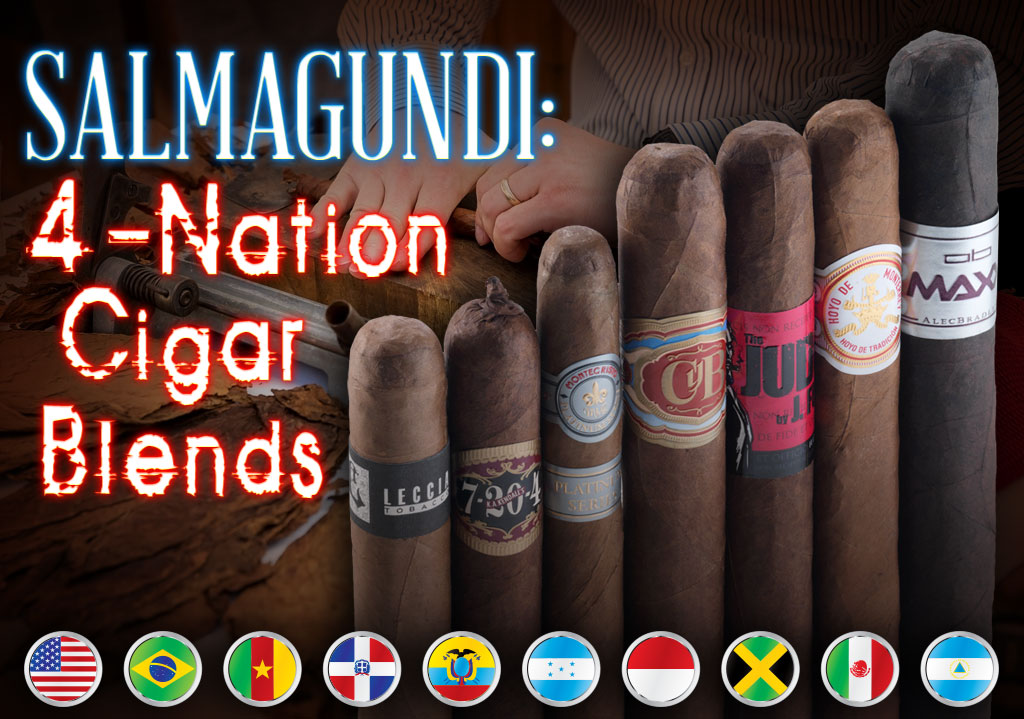 Salmagundi Smokes: Cigars with Many Countries of Origin

I am oddly and easily intrigued by bizarre words. Like this one: kinnikinnick.

I’m digging that one right now.

The Oxford Dictionary says kinnikinnick is “a substance consisting of dried sumac leaves and willow or dogwood bark, smoked by North American Indians.” Brothers of the leaf, indeed.

Here’s another: “salmagundi.” If you’ve ever had/seen/been subjected to it, salmagundi is a dish consisting of anchovies, oysters and various seafood, cooked chicken, pork and other meats, vegetables, fruit, leaves, nuts and whatever else you can find in the pantry thrown on a plate and topped with oil, spices and/or maybe a salad dressing.

While it may sound gross on the surface, the salmagundi is actually prepared in such a way as to produce a huge range of flavors, textures and colors on one plate. Tasty. Diverse. Flavorful. Complex.

Sounds like something you’d want from a good cigar, no?

A blender’s job is to use the best qualities of each tobacco country of origin to his advantage when making the stew. Nicaraguan lays claim to both strength and a spicy intensity; Honduran leaf tends to be earthy, while Dominican is more smooth and refined. Mexican tobacco – especially San Andres, cured for maduro wrappers – is typically more earthy-sweet. If you’ve smoked a CAO Brazilia or Brick House maduro, then you know Brazilian tobaccos like Arapiraca and Mata Fina to be extra-rich and somewhat toasty. Ecuador, the United States, Sumatra, Cameroon, Peru, Cuba…each country’s contribution adds a little something special and unique to the mix. So what should happen, then, if you were to roll many of them together, creating a mix of tobaccos that hail from 4 or more countries of origin? By throwing more and more ingredients in there from these vastly different growing regions, I believe the more textures, intensities and wide ranging characteristics – yes, even complexity – you’re bound to find in that cigar. And when it’s really done right, you have yourself a salmagundi cigar.

Want to see what I mean? Here are 7 pieces of proof…

Premium smokes that have an uber-diverse mix of tobaccos in their blend are some of my favorites, and Kurt Kendall’s 7-20-4 is one of my top picks. Fillers include leaf from Nicaragua, Honduras, Mexico and Colombia; the binder is from Costa Rica, and it’s all clad in a dark-but-not-too-dark Mata Fina wrapper from Brazil. This robusto is going to need more pages in its passport: count the outer leaf and it passes through six countries of origin, each contributing something unique to the blend, which is full in body – yet impressively, retains a more medium strength profile.

Their partnership was relatively short-lived, but the Jose Blanco/Alejandro Martinez Cuenca tag team produced this very fine smoke in 2012 under the Joya de Nicaragua banner. JdN was long the home of the Nicaraguan puro; a gratifying departure, CyB incorporates a heady concoction of two Nicaraguan tobaccos (one from Esteli, one from Ometepe), rich Dominican Piloto Cubano (meaning Cuban seed), viso leaf from Peru and a natural Habano wrapper from Ecuador. Not your typical Joya, as it’s medium bodied – but true to form, CyB is ripe with an enjoyable mix of flavors.

A while back, I wrote about underrated cigars…and truthfully, I made a mistake leaving this Hoyo off the list. Impressive not only in the amount of thick and creamy smoke that pours out, but in the Hoyo de Tradicion resume: Piloto Cubano from the DR, earthy Honduran tobacco and a twist of Nicaraguan leaf from the very rich soils on the island of Ometepe. Already, it’s a savory mix – a plus is that it’s a little more leathery and richer than the original Hoyo de Monterrey, if you’re into that. Top it off with a natural Connecticut Habano wrapper, and you have a swarm of flavors that balance in the same delicious, spicy-sweet way as does a big helping of General Tso’s Chicken.

Viva Jesus Fuego:  Retribution is a stocky 6×50 toro that really gets a chance to show off some of the flavors you’ll find in extra-fermented tobacco: cocoa, dark chocolate, coffee, pepper…the list goes on. The complexity comes thanks to Fuego’s expertise with Corojo tobacco – and the Judge is a full-on smorg, with Costa Rican Corojo binder and Corojo varietals from Honduras and Nicaragua, plus a touch of Mexican San Andres. The third is where that dark/sweet taste comes from; that flavor gets amplified to “full” by wrapping the mix in an aged Brazilian Mata Fina that’s tinged with a sheen of natural oils. A savory, rock solid smoke.

Sam Leccia has always had an affinity for ligero…at least it seems that way, and Black does nothing to dispel that notion. If you’re not familiar with it, ligero is the thickest, oiliest and most potent leaf from the highest priming of the plant – and rich, albeit more in strength than in flavor. Ligeros hailing from different countries of origin are different in taste – but they’re all burly, as evidenced by the mix of Dominican and Nicaraguan ligeros here. Leccia adds Brazilian Mata Fina to smooth any harshness, then seasons his brew with a twist of American-grown “Dark Fire” – a wood fire-cured tobacco that’s mild and subtly smoky, in a scrumptiously barbecue way.

The contents of this Alec Bradley offering reads like a 10-day cruise of Central America: Honduras (earthy), Nicaragua (spicy), Colombia (toasty) and Mexico (sweet) all contribute long filler tobaccos. Costa Rica (nutty) sends its love with a binder that adds balance and complexity; the MAXX is finished in an oily, dark natural Nicaraguan Habano wrapper that, when all is said and done, results in a rich smoke that’s full in flavor yet still hovers around the medium mark in strength and body. It’s rare to see a cigar claiming 5 countries of origin, and especially one this smooth – so snap it up post haste.

The original Dominican Montecristo set the bar for mild, smooth and creamy; Montecristo Platinum came along and blew it out of the water. It is, however, still a Montecristo – so only the finest will do: vintage Dominican long leaf filler is blended with Nicaraguan and Peruvian tobaccos, the latter having a typical taste that’s rich and spicy without being harsh. A little goes a long way when you’re blending with tobacco from Peru; it’s really rich. The wrapper is from Mexico, a strain called San Andres Cubano that seems (to me) a little earthy-sweet. My favorite of the Montes, it’s fuller than you’d expect – and probably the most diverse in their portfolio in terms of the tobaccos’ countries of origin.

Pretty mean of you to plug the wonderful CyB when you don’t have any to sell. Is this meant to be a wind-up?

Five Things a Cigar Smoker Should Never, Ever Do…Ever.