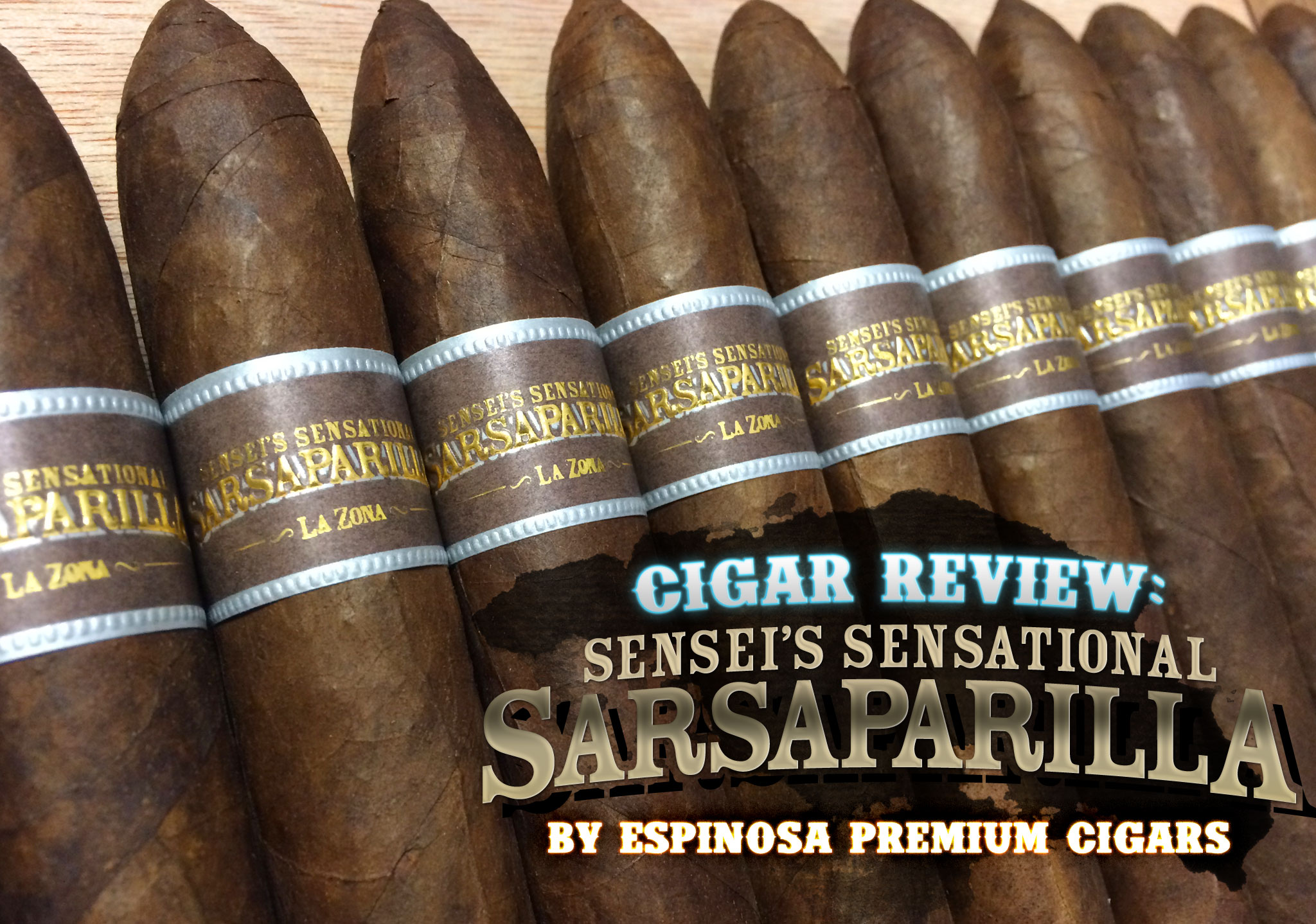 Cigar Advisor magazine presents a group review of the Sensei’s Sensational Sarsaparilla cigar. Our expert panel includes Managing Editor, John Pullo; Executive Editor, Gary Korb, Editor at Large, Tommy Zman, and writer/columnist, Jonathan Detore. Rolled in only one shape, here’s what our reviewers had to say about this very limited edition cigar made at the La Zona Factory in Estelí, Nicaragua. But first…

The Back Story
Eric Guttormson, “Master Sensei” and owner of the popular Cigar Dojo app, contacted Erik Espinosa from Espinosa Premium Cigars in Estelí, Nicaragua, asking if they could collaborate on a cigar that pays homage to the warm, full, complex flavor of the old-west Sarsaparilla. In those days, Sarsaparilla was very popular drink and often believed to be a remedy for a number of ailments, and is still popular to this day.

Sensei’s Sensational Sarsaparilla is a 5½” x 52 Belicoso rolled in a stunning Mexican San Andres maduro wrapper. According to the press release, the undisclosed long filler core is “blended with some of the most flavorful and interesting tobacco you will ever smoke.”

“We wanted to come up with a cigar that had a unique flavor and evolves as you smoke it; something that will grab your attention and not let go,” said Guttormson, which is why he wanted to work with Erik Espinosa at his La Zona factory. “They produce the full-flavored types of cigars we were shooting for, so it was the perfect match,” he added.

Gary Korb: “Erik Espinosa has a rep for quality construction, so the look and feel of the Sarsaparilla was a non-issue. It was well-packed, and the Mexican San Andres wrapper is thick and toothy with an attractive and even-coated dark brown hue.”

John: “The cold draw actually had a little bit of ass-kick and pepper to it…I think that’s going to bode well – I bet this is a flavorful smoke.”

Gary: “I found the cold draw somewhat nutty. A trace of hickory in there, too.”

No toasting or lighting issues for the Sarsaparilla – the tobacco took easily to flame, and delivered a variety of flavors in the first few puffs.

Jonathan DeTore: “Right off the bat, I got a small hint of pepper. Nowhere near overpowering, and with a mix of sweet citrus. There’s also a mix of cream and nut, a slight metallic flavor, and a note of roasted coffee.

John: “A ton of body upfront. It pistol-whipped me with a licorice flavor before it tried to make a run for it. The smoke was so thick I had to wave my hand to clear the air. There was also a bit of a naturally sweet aftertaste on the finish.”

Tommy Zman: “I picked up some anisette flavor upfront. Like, right off the bat. Some woody flavors in there, too.”

Gary: “The first few puffs for me were nutty in taste and finished with a coat of creaminess on my palate.”

John: “Licorice. It also had a tanginess that was tapping on parts of my mouth that hadn’t been touched that way before, and definitely stimulated some underutilized taste buds. The smoke also had a meatiness to it, too. There’s a lotta sizzle in there and a very sweet aroma. Not candy store sweet; more like a liqueur. Bottoms-up to that.”

Zman: “I got that liqueur sensation, too – this cigar is loaded with flavor. Very distinct, very complex flavor. I couldn’t tell if it was an anisette or sambuca taste, but it was big-time rich.”

Jonathan: “The flavor is on point. The smoke starts out with in-your-face flavor and a medium-full bodied profile. As I smoked through the entire cigar, the pepper died down a little. Then, the richness really opened up with creamy, woody, and nutty flavors, and a citrusy bite that remained medium-full and consistent throughout the rest of the smoke.”

Gary: “Early on I picked up some earthy and herbal notes. As the burn moved past the first inch, flavors and aromas of aged oak and nuts began to whittle their way in. The retrohale also offered a very creamy, woody aspect with no sign of pepper, even in the latter stages. By the halfway mark, flavors of oak, wood, and nuts were fully defined, with a note of hickory dropping in every so often.”

Jonathan: “It’s been quite a while since I’ve had a cigar smoke this perfectly. Nice even burn, tons of natural smoke production, and an unbelievable draw. Just based on how it smokes, this cigar is beyond stellar.”

John: “The burn was a little wavy, but never once went off. Ash was tight – I mean, TIGHT; barely any cracks.”

Gary: “The burn very good, though slightly off at times, but never annoyingly problematic. My ash was pretty grey and pretty firm, but not as tight as J.P.’s.”

Zman: “Zero burn issues at all.”

Jonathan: “As the cigar smoked along, the pepper died down a little, and the richness really opened up. I picked up creamy, woody, nutty flavors with a citrusy bite that remained consistent throughout the rest of the smoke.”

John: “Sarsaparilla (the drink) is apparently supposed to be very complex, but fortunately this cigar isn’t over the top with variety. It changed up a few times, and about one-inch in there was an added dry spice fullness that came from the bottom up that pulled everything together reeeaaaal nice. I can’t put my finger on it, but you’ll know it when you feel it, and I didn’t realize what was missing until it showed up. The last third turned into a hickory-fueled bbq pit – I almost want to smoke some ribs over it.”

We don’t do numbers with our cigar reviews, but our group was unanimous: Sensei’s Sensational Sarsaparilla offers a lot of flavor, and comes with a high recommendation.

Jonathan: “Overall, I’m very impressed. The complexity is not over-the-top amazing. This is a straight-up cigar loaded with flavor. If you love medium to full bodied cigars without having to set time aside for a recovery period, this is one stogie you’ll absolutely love.”

John: “All in all, this Sarsaparilla is a very thick and heavy smoke. The flavors are dark, nutty and woody. Refined in presentation, rustic in flavor, robust to be sure, Sarsaparilla never wanders past medium-full strength, but the body is super-full, and the aroma hangs in the air, seeming to add mass to the open air. The heavy-hitting spicy stuff of foreign lands is at work here, transforming your smoking space.”

Gary: “This was a solid, medium-bodied smoke (to my palate), and well-balanced with an appealing aged oak barrel flavor, earthy-nutty overtones, and a teaspoon of hickory, all of which dovetailed perfectly as the cigar smoked. I would recommend this cigar to both newbs and experienced cigar smokers for its quality, smoothness, consistency, and sensible price point.”

Zman: “Erik Espinosa has delivered a full-flavored blend like nothing you’ve smoked before. It’s definitely the cure for what ails you.”

Agree? Disagree? Please leave a comment – or take Sensei’s Sensational Sarsaparilla for a test drive yourself by clicking here.

Is this a flavored cigar?