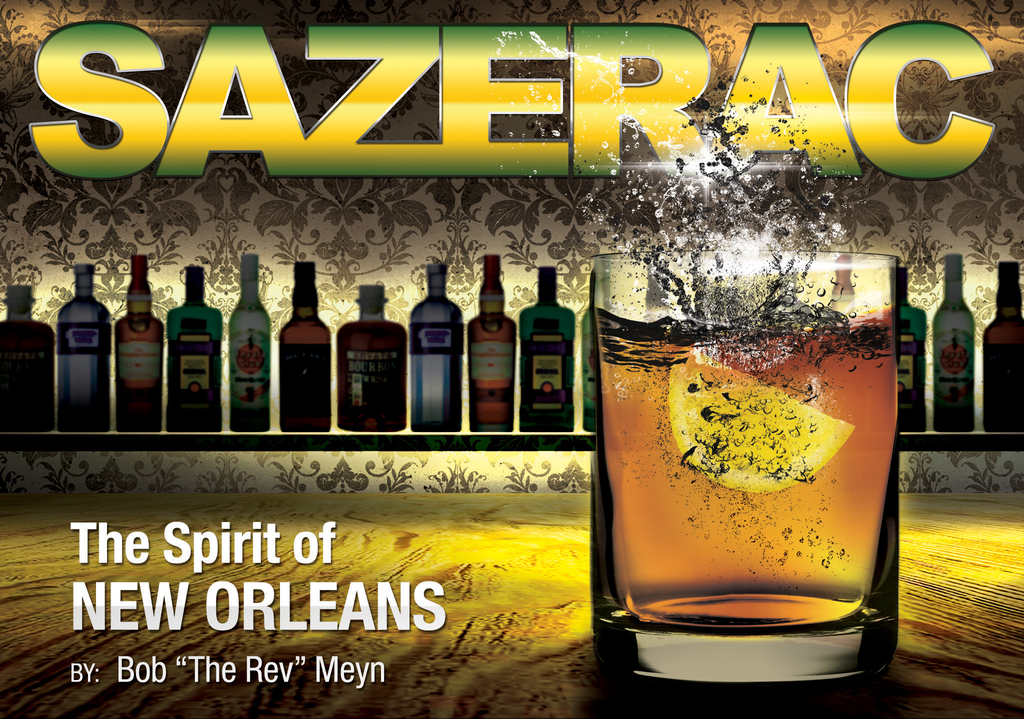 Sazerac: The Spirit of New Orleans

Being from New Orleans, I have always been something of a student of food and drink. But one cocktail in particular is near to my heart, the Sazerac, a drink whose provenance includes alleged healing powers, a plague on European vineyards, and political chicanery.

First, let’s discuss the term “cocktail” because it is typically misused, and I make it a habit to know exactly what I am ingesting. A cocktail is by definition an alcoholic beverage that contains three ingredients: one being a spirit, one being sweet and one being sour/bitter. Common cocktails that are still imbibed today include Whisky Sour, Old Fashioned, Tom Collins, and, of course, Sazeracs. 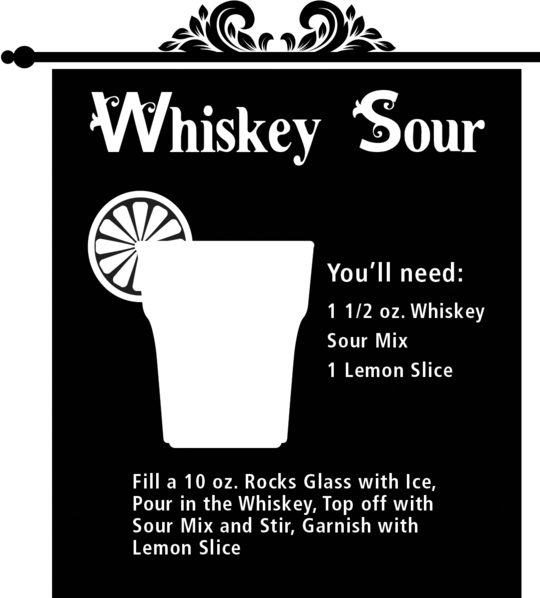 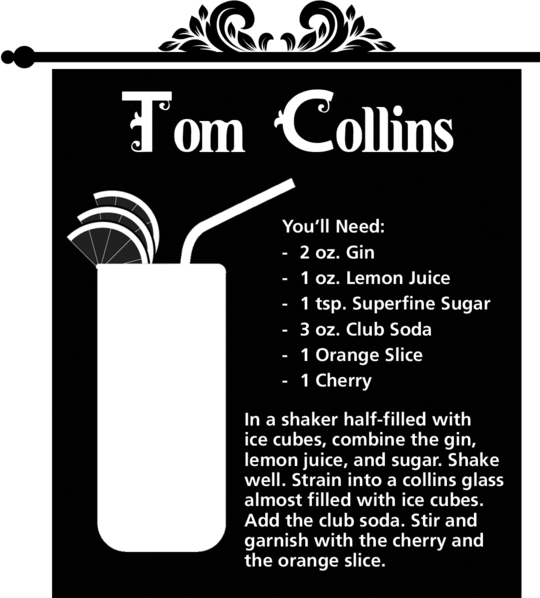 The drink that eventually came to be known as a Sazerac was actually born in a pharmacy. Antoine Peychaud, a Creole apothecary of Haitian descent, set up shop in the French Quarter in the early 19th Century. In addition to dispensing his traditional “medicines,” Peychaud formulated a gentian-based bitters recipe in his New Orleans pharmacy around the year 1830 and began selling it after-hours for “medicinal purposes.” Peychaud claimed his bitters could provide relief from just about any imaginable malady. Most likely, this was because he dispensed his bitters mixed with brandy and absinthe, an anisette liqueur. Thus the precursor to the Sazerac was born.

Around 1850, in an establishment called The Merchants Coffee Exchange (which was actually a bar but called a coffee house to put the growing number of teetotalers and future prohibitionists off the trail), began serving a beverage of cognac, Antoine Peychaud’s bitters (produced literally down the street at the apothecary’s shop) and absinthe. The drink proved so popular that The Merchants Coffee Exchange was re-named The Sazerac House and served the Sazerac Cocktail as its most popular drink.

Plague and political intrigue played a role in the evolution of the Sazerac over the next several years. In the late 19th century, the grape phylloxera, a yellow, nearly microscopic sap-sucking louse that feeds on the roots and leaves of grapevines, nearly wiped out the vineyards in France that produce, among other things, the grapes used to produce cognac. Perhaps a form of karma coming around to Europe for spreading smallpox and syphilis to the New World, phylloxera was transported from the New World to Europe on North American grapevines that had a natural immunity to the louse. Unfortunately, the French grapevines had no such immunity and were almost wiped out by this tiny varmint. With Cognac now essentially unavailable, the Americans turned to rye whisky as a substitute. Rye was readily available and produced an inexpensive source to produce a whiskey that was not susceptible to the vagaries of microscopic lice.

The other major ingredient change occurred not as a result of natural disaster but rather a nasty smear campaign by the growing numbers of prohibitionists in the United States. Absinthe, originating from Switzerland, is an anise flavored spirit derived from botanicals, sweet fennel and the leaves of Artemisia absinthium (a.k.a. Grand Wormwood). Absinthe was wildly popular with artists, free-thinkers and other bohemian-type folks in Europe, and this drew the ire of conservatives and prohibitionists there and in America. To stop the consumption of Absinthe, these concocted a baseless story that Absinthe contained very harmful substances derived from the wormwood that basically turned you irreversibly into a lunatic. These allegations caused Absinthe to be outlawed in the U.S. in 1915. The smear campaign was so effective that to this day, many people still believe Absinthe to be dangerous even though studies have never show Absinthe to be any more harmful than any other spirit. 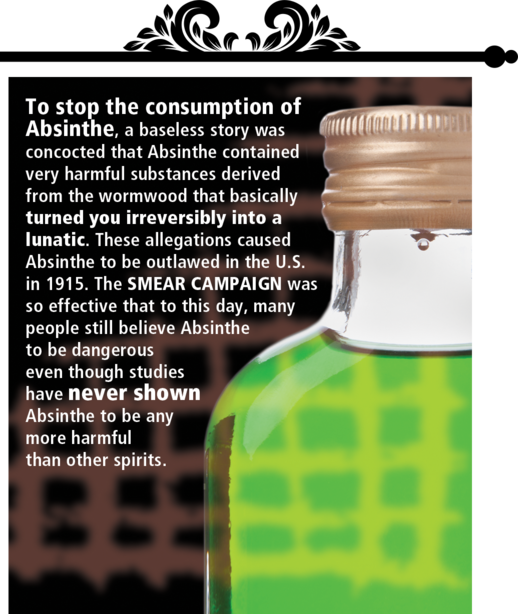 Not to be denied by the prohibitionists, J. Marion Legendre and Reginald Parker of New Orleans createdHerbsaint (nearly an anagram of Absinthe), with essentially the same ingredients of Absinthe sans the wormwood leaves. Other anise-flavored spirits are sometimes used, and since the 1990s, bona fide Absinthe has been produced again, although Herbsaint is still the spirit of preference due to the many years it has been used in the recipe.

The modern Sazerac is a very simple cocktail, served neat, combining 2 ounces of rye whiskey, 1 sugar cube, 3-5 dashes of Peychaud’s Bitters, a splash of Herbsaint, an anise-flavored liqueur, and lemon peel as a garnish, put together thus, according to my trusty bar book: 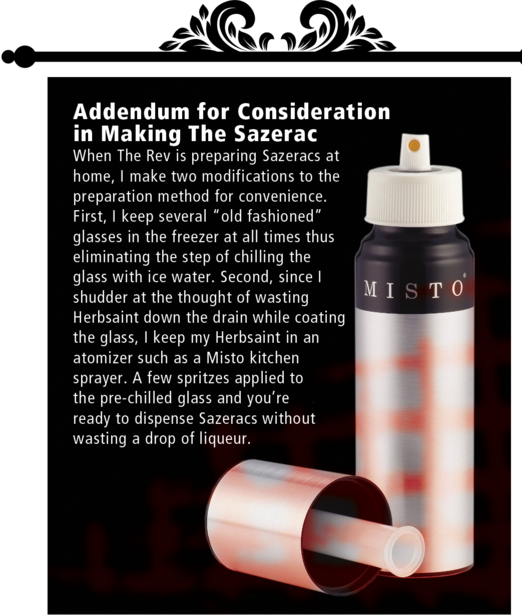 To accompany a Sazerac, I recommend a medium-full to full bodied cigar. The Sazerac is essentially cold, straight whiskey with a little flavor enhancement, so you need a cigar that can stand up to the strength of the drink. I typically turned to Nicaraguan cigars such as Tatuaje Black, El Triunfador, or the Don Pepin Garcia Blue Label. Also, I wouldn’t recommend more than a couple Sazeracs at one sitting. Too much “medicine” can cause embarrassing side effects. So take your Sazeracs as directed – in moderation.

Reading Time: 5 minutes Cigar samplers are great for discovering the smokes that may become your regular favorites; that goes double if you’re new to cigars. Click now for 5 of our top picks, our most-recommended cigar samplers for new cigar smokers…