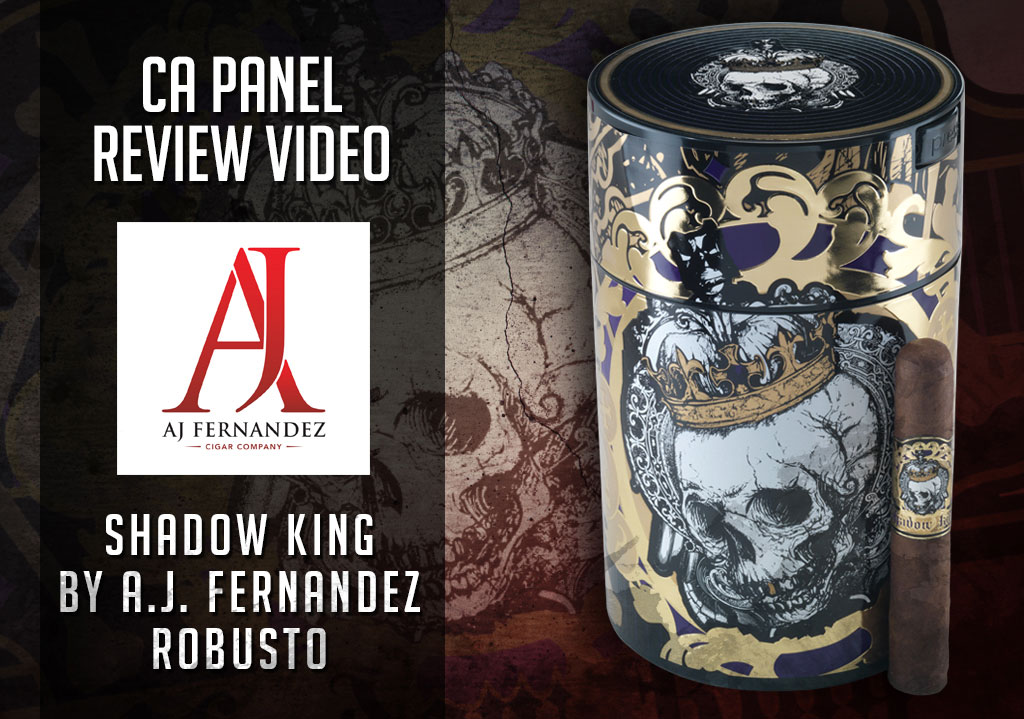 Created expressly for Famous Smoke Shop, Shadow King cigars are handcrafted by AJ Fernandez in Nicaragua. Presented in affordably-priced 20ct. HumiJars and 5-Packs, Shadow King is built on a 5-nation blend and has all the makings of a great full-bodied smoke.

Below you’ll find our written observations, but to see and hear what the panel thought of the Shadow King Robusto, click on the video. As always, we welcome your comments.

Presentation: HumiJars of 20 cigars and 5-Packs

Draw: not much resistance; this draws real nice.

Pre-light flavor: Whoa. Even the prelight is bitey, full of spice, black coffee and earth/mineral quality.

Burn / Ash Quality: The carbon line is very thin; the burn stayed relatively straight, with only a few slight waves. Exhibited a mottled ash, but held on great.

Balance of flavors: My Shadow King cigar is a pretty complex smoke – it moves in waves, from one set of flavors to another at the usual points.

“It’s an AJ.” That was the only thing running through my mind before I smoked it, figuring this to be another Nicaraguan pepper bomb. As mentioned in the pre-light, this cigar had a dark set of flavors that I figured were going to lead me on a wild ride; almost an exotic spice feel to it.

Turns out I may have psyched myself out, as it’s not as strong as I had expected – maybe medium, medium-full at best. It’s not strong, so much as it is just peppery…the kind which leaves a tingle on your lips and on the inside of your cheeks.

The Shadow King didn’t have a lot of sweetness through the first third – I was reminded more of earth and bitter cocoa. Then it took a turn, which I think you’ll notice even more if you’re smoking this while drinking coffee. A subtle sweetness comes into play, and a drink really rounds out the flavor, making it less edgy. Earthiness comes into the equation – there’s a peaty quality, then something that makes me think of malt.

By halfway, this AJ cigar goes a little flat…not much is happening on the flavor front. But that’s very brief, as the robusto quickly redeems itself with the original dark n’ spicy flavors from the pre-light. Flavors level out there, while the pepper and the overall strength of the cigar intensify straight through to the finish.

I don’t have a lot of experience with AJ’s cigars, but I can tell you, don’t write Shadow King off as just another strong smoke. It keeps your attention for sure, and you almost want to smoke it quick just to see what it does next…but why rush?

Great smoke output, long burn, and certainly satisfies the needs of full and strong cigar lovers. If that’s you, give it a try.

Construction and Overall Appearance: Solidly built with a triple seam cap. The wrapper is slightly toothy and even in color. No soft spots with barely visible veins.

After a peppery start, this cigar rounds out to a smooth, full-bodied and spicy smoke with a buffet-like serving of flavors that range from earthy spice to sweet elements, including espresso, cocoa and black pepper, all of which peak-in at various intervals. And that was just the first half of the cigar.

The second half of the Shadow King cigar experience offers a much “darker” smoke with more intensity. (Truth be told, I began to feel a little heady at this point.) The flavors seemed to coalesce into one big, fat note of earthy tobacco flavor with the sweetness now virtually non-existent; even the pepper has faded slightly into the background.

All of this adds-up to a very compelling and intriguing smoke that’s best suited for the experienced palate. Newbies will be best served by sitting this one out. But for those who crave a heavy-handed complex smoke like the Liga Privada T-52 or some of A.J.’s other full-bodied blends, the Shadow King will get you there in spades.

Pre-light flavor: Rich earth, chocolate and black pepper on foot, a wood and earthiness on the pre-draw.

Balance of flavors: This cigar found a nice balance between spice and sweetness that resulted in a not-overpowering full-bodied smoke.

Consistency: The general base flavors remained the same throughout with varying subtleties changing with the progression of the burn.

When you’re looking for something spicy and sweet, light up the A.J. Fernandez’s Shadow King – you’re in for a treat. Not your typical full-bodied pepper bomb by A.J, this cigar is full-flavored and complex. With a savory 5-nation blend, see why we’re raving about Shadow King!

The pre-light gives flavors like that of dry cocoa powder, black pepper, and a rich earth. Upon lighting the Shadow King the initial black pepper and woods tastes take the forefront with notes of leather. As my first inch comes to a close, a nice sweetness hangs in the background. This cigar is one spicy and sweet smoke with underlying flavors of nut, wood, black coffee, leather, and a peaty earth.

As the 2/3 kicks off, the sweetness is really a nice balancing component to the spicy Honduran and Nicaraguan long filler. Not to mention, there’s a ridiculous amount of creamy smoke that’s just pouring out of this cigar. A quick retrohale produced a very woody and earth-like taste.

With all of the balance and complexity, this is still an A.J cigar which means it’s strong and full-bodied. It did give me a mild case of the cigar-burps, and it wouldn’t hurt to keep something sugary on-hand.

The construction on this cigar was flawless. The Ecuadorian Sumatra wrapper, in a very handsome Oscuro shade, held no faults, a nice oily shine, and a subtle toothiness. No soft spots and the burn held a nice sharp line.

This is a complex smoke like many of A.J.’s cigars, but this one has a hell of a lot more pop than his usual offerings. What do I mean by pop? Intense flavors that whack your palate like a hammer shaped pepper shaker. Black pepper is the predominant flavor the moment you start to puff, and if you were sleepy upon lighting, you’re now wide awake, bright eyed and bushy tailed. Hey, you, wait… come back here… don’t go runnin’ off all scared because this beauty doesn’t overpower. Even as the flavors are pronounced, it’s very smooth and super tasty.

So, there’s definitely a lot more to the flavor profile than just pepper and spice, as about an inch in you get deep earthy tones, charred wood and it really reminds me of a hearty shot of espresso. Now what’s interesting here is that while many cigars build in intensity and strength, this one actually does quite the opposite. So, while it starts off with that wicked oomph, it calms down and rounds out very nicely into the medium to full bodied range as those wood and dark coffee tones stay pretty consistent all the way through. Oh, it’s still pretty damned full-flavored but I think it gets more pleasant on the taste buds. And usually with a dark beauty like this I’ll get some sweetness, but I really didn’t get a whole lot, almost like drinking that espresso with just a little pinch of sugar.

As far as the construction, every A.J. Fernandez cigar is solid and perfectly rolled and this one follows suit with a perfect slow burn and a sturdy ash. And the scent is very rich and extra smoky.

To sum things up, the Shadow King is really one hell of an A.J. creation that is meant for the more experienced palate and definitely not meant for newcomers to cigars. And it’s really not meant as a beginning of the day smoke. I would pair this with a strong coffee, a hearty red wine or a bold whisky. And it would definitely work well after a more robust meal like steak, ribs and anything blackened or spicy. It’s an excellent new effort by master Fernandez and highly recommended if you want to smoke a stick that you can really taste.

Reading Time: 3 minutes Looking for a new smoke to rid you of the winter slump? Top New Cigars has them all – click here to check them out now!