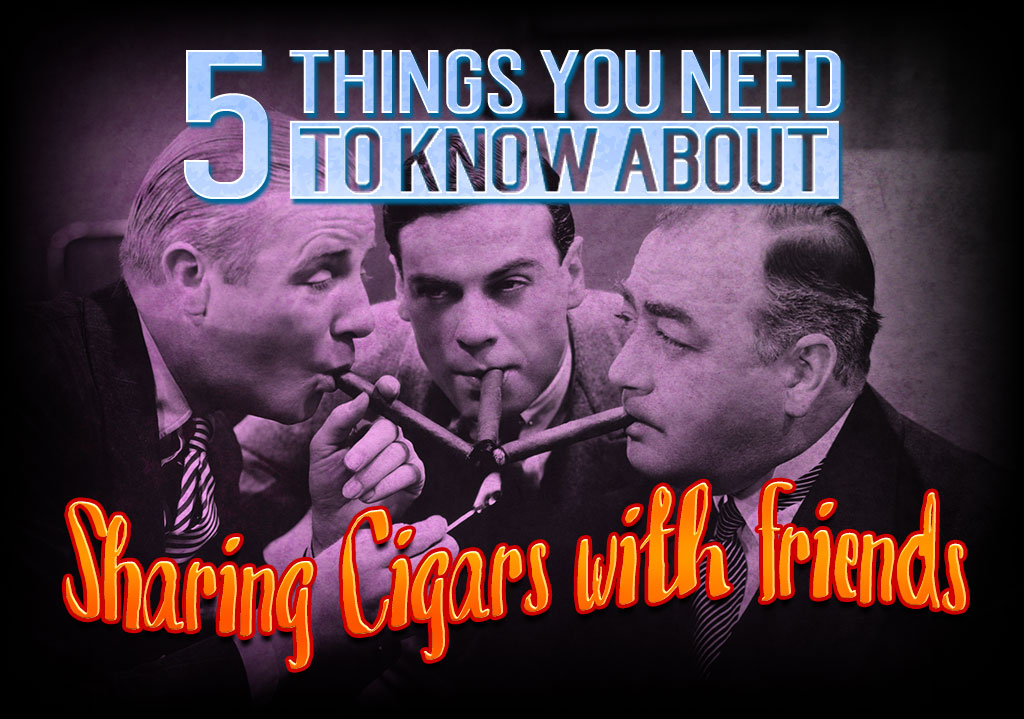 5 Things You Need to Know About … Sharing Cigars with Friends

5 Things You Need to Know: Methods for Sharing Cigars with Friends

Sharing is one of the first things we learn as children. Whether it’s sharing with a sibling, a friend, or someone you don’t even know, the maxim, “share and share alike” is conventional dogma among many dedicated cigar smokers who engage in sharing cigars; not out of any particular obligation, but often for the sheer satisfaction of seeing another cigar smoker take pleasure in something they already enjoy themselves.

To be clear, when we talk about sharing cigars with friends, we mean handing over a fresh cigar. Believe it or not, in one thread that I read in an online forum on the subject, the participants actually took the word “share” to mean passing an already lit cigar around like a spliff.

Get ready to pick-out your primos, because here are five ways you can partake of some great cigars among the company of friends…

Trading is the most common form of sharing cigars. Usually practiced between friends, but not necessarily exclusive to someone you know personally, trades consist of cigars that you’re willing to trade from your private stash for cigars from a friend’s stash. Of course, the trade must be mutual, in that, you both have cigars that the other has always wanted to smoke. Although there’s no steadfast rule about this, these trades also tend to be for cigars of similar “value,” which can be a dollar amount or simply the level of desire between the parties. In the spirit of friendship, negotiation rules should be spared, but depending on the collections in each of your respective cigar humidors, certain cigars may be worth more or less than a straight one-to-one trade.

A herf is a gathering of cigar smokers at which cigars are smoked and shared among the entire group. Held at someone’s home, a cigar lounge, or a smoking-permitted bar or club, the guests generally come prepared to share several hours or more of communal smoking, drinking, and eating. For this reason, herf attendees will usually bring a travel humidor or a bag filled with their favorite cigars, and once the booty is revealed, some gifting or trading may even take place during the course of the event. The herf is also a great opportunity to discover some rare cigars, or enjoy a cigar that’s been on your wish list.

This is a great one, because a “bomb” is the act of shipping cigars to a fellow cigar smoker entirely unannounced, as in “bombing the mailbox.” The surprise package most often contains cigars from the bomber’s private stash. Depending on the whim and/or the generosity of the bomber, the best part of the bomb is getting sticks that are either very expensive, rare birds, or simply hard to find. The unwritten rule here is that the “bombee” will reciprocate at some time in the not-too-distant future by bombing back with some equally awesome smokes.

What makes this cigar sharing method fun is that it has a “pay it forward” component to it. The source for most cigar passes are online cigar forums where forum members get to trade and sample cigars from each other’s collections, giving them the opportunity to experience new cigars or cigars they are unacquainted with. The cigar pass is organized by a “host” who invites x-number of members and provides the initial pool of cigars from his (or her) own private stash.

Using a list of members the host has prepared, he (or she) begins the process by placing the cigars in a box and sends it to the first member on the list. Once that member receives the cigars, they pick out a few that they would like to sample, replaces them with cigars from their own collection, then sends it to the next member on the list, and so on, until everyone on the list has received the box and made their trades, with the last member shipping the box back to the host.

Rod of CigarPass.com has built an entire website around this form of cigar sharing.

“When starting a pass, it’s always a good idea to come up with a theme, or perhaps basic rules,” writes Rod, and “always be sure your rules and requirements are clearly stated before posting your pass and asking people to join.” Some examples of the kind of cigar passes a “host” might initiate are:

Rod suggests that you always list the order of your participants in geographical order. “This way the pass won’t travel around the country multiple times, and will more quickly make it to each participant with less travel time. Arranging the shipments geographically will also keep the shipping costs to a minimum.”

For detailed information on how to host a cigar pass, check out Rod’s “Rules of a Pass.”

The Treat is a form of sharing cigars that doesn’t necessarily require cigars from your home humidor. Let’s say you and a friend or two are Jones’n for a good smoke and decide to hit the cigar store. Beforehand, you all decide that in addition to what you buy for yourself, you’re going to buy one extra cigar for each other. When you get home, or to wherever you’ve decided to light-up, everyone lays out their purchases and hands the “treat” cigar to the respective person or persons. Here again, it should be a cigar that they’ve never smoked before. Depending on the number of friends in the group and the cigars you choose, this could be a pricey excursion, but eventually it will all come out in the wash.

If you’ve got your own method for sharing cigars with friends, please share it by leaving a comment.

I never charge friends for a cigar. I play baseball, and sometimes I like to light up after a game. I always bring extras. If a teammate wants to join me, they will often say, “Can I buy one from you?”

My answer is always, “No, but I will give you one.” I generally always have about 30 cigars in my humidor, and all but about 10 are meant to be shared. So, whenever I am going to an event where I may smoke, I bring five in my travel humidor. One for me, and four to give away. These aren’t cheap cigars, but generally I have multiples of the ones I give away. That way, I can always share with friends without feeling like I am missing out on a smoke.

If you are not in a financial position to just give cigars away, I would recommend buying seconds of top brands. I recently bought 15 Rocky Patel 1990 Maduros that had slightly discolored wrappers or some other imperfections that made Patel consider them seconds. I got them online at 70% off. The imperfections are almost imperceptible, and they taste and burn just like the perfect ones. That is an easy and cost effective way to always have sticks you can give to friends, both old and new.

Reading Time: 2 minutes This year, we’ve resolved to keep showing you the best of the new cigars at Famous Smoke Shop. Let’s dig right in, shall we?