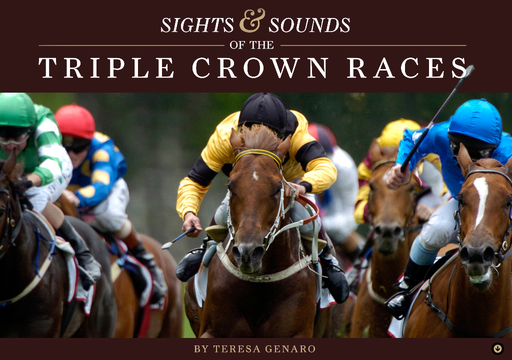 The stable area at Churchill Downs on Derby morning is a mix of chaos and calm. Writers and photographers swarm among the barns; visitors and guests mill with cups of coffee, trying to avoid being run over by a car, a golf cart, or a horse. Trainers and grooms stick to the usual morning routine, but they don't fool anyone. By the end of the day, theirs will be either exultant joy or stinging disappointment.

The early crowd -the first race goes off at 10:30–arrives ready to party. By post time for the main event–eight hours later–160,000 will cram into the behemoth that is Churchill Downs, built to accommodate this one day. For some, the imbibing will start early; they'll head to the infield, where their only view of the race is on a screen.

In the boxes and in the heftily-priced seats, in the section unabashedly called Millionaires' Row, the celebrating is more sedate. Flutes of champagne are held in bejeweled hands; summer finery swings beneath lofty hats. The lucky and the wealthy enjoy coveted views of the whole track; those of more modest means, who have shelled out only $100 for a seat, hope to catch a fleeting glimpse of the horses as they fly by.

More than a century of savvy marketing has made the Derby the most famous horse race in in America; for trainers, owners, and jockeys, winning it is the ultimate dream. It's the one horse race to which people in this country pay attention, and after hours-if not months-of waiting, it's over in two minutes.

For the winner, there is elation, but too little time to enjoy it. For in two weeks, Baltimore-and history-beckon.

If anxiety is pervasive at the Derby, the pressure at the Pimlico Race Course lands on only one horse, one trainer: the ones who won two weeks ago. The other runners have nothing to lose, everything to gain, and the atmosphere at the stables is lighter than at Churchill. It's hard to enjoy those pre-race days in Louisville, but easy to enjoy them in Baltimore.

Historically, the revelry at the Preakness made the Derby look like a kindergartener's birthday party: a liberal alcohol policy meant that racing fans literally rolled grocery carts full of booze to the infield. To call the atmosphere “debauched” would be kind.

In recent years, Pimlico has pulled back on that policy: BYOB is no longer the rule, but pay $20 and you can get your Preakness commemorative mug re-filled all day long. And to ensure that the environment doesn't get too high-brow, Pimlico introduced Kegasus, the half-man, half-horse, shirtless and pierced-nipple-baring party animal who hangs out in the equine equivalent of a man cave in the infield.

Over in the clubhouse and grandstand, Maryland hospitality is on full display. The Black-Eyed Susan is the signature drink, named for the Maryland state flower and the race for 3-year-old fillies that is run the day before the Preakness.

Each of the 20 horses in the Kentucky Derby will have his backers in the crowd; at Pimlico, the fans speak with nearly one voice, wanting the one thing that only the Preakness can deliver: a Triple Crown candidate.

The tenor of the Belmont depends wholly on what happens at the Preakness. A Triple Crown on the line, and the Belmont Stakes is a world-class event, with turf journalists from around the world requesting credentials, and racing fans from around the country booking tickets.

But if the Derby winner loses the Preakness, the Belmont Stakes, with its anachronistic mile-and-a-half distance, can be little more than a day at the races.

A Triple Crown bid means that more than 100,000 people will fill Belmont's massive expanse; without it, the crowd will be half that.

The Belmont is called “the Test of the Champion”; a horse that would claim the first Triple Crown since Seattle Slew in 1978, and only the 11th ever, has to win three testing races in five weeks at distances he's never run before – culminating in the marathon that is the mile-and-a-half Belmont Stakes. BelmontPark, less than 20 miles east of Manhattan, boasts the only track of that distance in the United States, and it's a distance that modern horses rarely run.

The horses will break from the starting gate at the finish line; once around that majestic oval, two and half minutes, and history will be made…or more likely, it won't. Since 1978, 11 horses have come to Belmont with a Triple Crown on the line, and hundreds of thousands people have flocked to Belmont hoping to see history. They've all gone home disappointed.

Teresa Genaro is a freelance turf writer whose work appears regularly in The Blood-Horse and New York Breeder and at Forbes.com; she contributes to The Saratogian‘s coverage of the Saratoga racing meet and her work has appeared in Thoroughbred Times, the Daily Racing Form, and Hello Race Fans. A Brooklyn dweller and an erstwhile and occasional resident of Saratoga Springs, New York, she teaches high school and when not teaching or writing, she's watching the Rangers at the Garden, playing Scrabble, or rescuing cats.