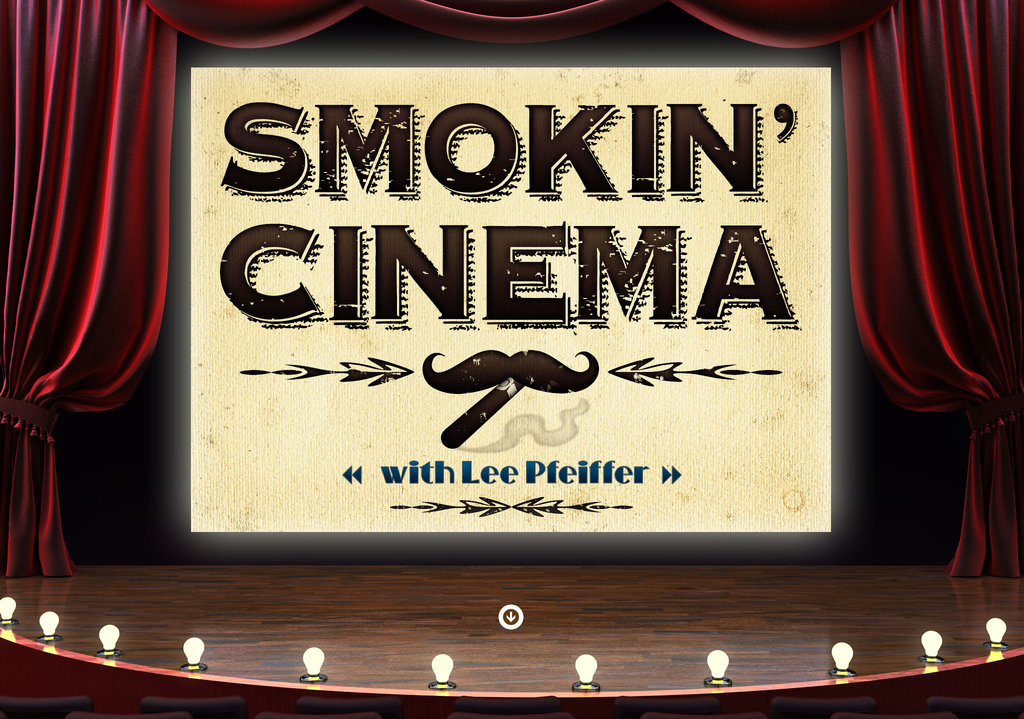 Among the most iconic screen heroes to light up stogies was Clint Eastwood’s legendary “Man With No Name” character in the trilogy of classic Italian Westerns directed by Sergio Leone. Leone had been making a living writing the screenplays for low-end Italian movies. He made his directorial debut with the 1961 mini-epic The Colossus of Rhodes starring Rory Calhoun, who was among the first second-string American leading men to find popularity in European low-budget movies. The film received distribution in the United States and became a surprise hit, but it would still take a few years before Leone would get to helm another feature film.

That project turned out to be The Magnificent Stranger, a Western with a title inspired by the success of the 1960 classic The Magnificent Seven. Leone had always loved American Westerns and had long dreamed of bringing his own vision to the genre. The film was given a low budget in the expectation that it would make a few fast bucks on the European cinema circuit before fading into obscurity. As with the “tits and togas” epics that were popular at the time, Leone intended to hire an American actor for the leading role. His name was Clint Eastwood.

Eastwood had been attempting to get a foothold in the film business since the mid-1950s but all he could land were minor supporting roles in forgettable films. Clint went on to make smoking cinema famous. He was deemed so lacking in star potential that Universal dropped him as a contract player. Fortune smiled on him in 1959, however, when he was hired as the second lead opposite Eric Fleming in the ambitious and expensive CBS Western TV series, Rawhide. The series turned out to be a massive hit, but by 1964 Eastwood was getting bored with the work and was eager to return to feature films. When Leone came calling with an offer to star in The Magnificent Stranger, Eastwood immediately agreed to shoot the movie during his hiatus on Rawhide. His primary motivation was to simply get a free trip to Spain, where the film was to be shot. The pittance of a salary offered to him was almost an afterthought.

On the set, Eastwood formed an immediate bond with Leone, despite the fact they could not communicate verbally. Eastwood recognized that, for all the crude aspects of the production, Leone had real reverence for the genre and a style of his own that was quite innovative. Eastwood’s character was the ultimate anti-hero: a mostly silent drifter and opportunist whose name we never learn. He has a penchant for smoking stubby, cheap cigars and is only deemed heroic because the people he opposes have even less morals. Audiences weaned on traditional Western heroes in white hats immediately adopted this character. He was the perfect symbol of a more liberal time in which popular culture was pushing limits that would have been unthinkable a few years before. 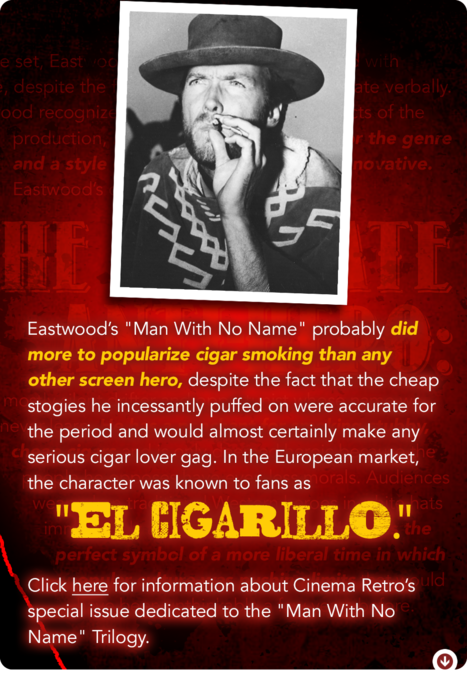 Upon finishing filming, Eastwood returned to America to resume work on Rawhide, convinced no one in his native country would ever see The Magnificent Stranger. Some time later, he read about a Western that was all the rage in European cinemas. The title, A Fistful of Dollars, didn’t mean anything to him until he read that he was the star of the film. The production company had re-titled The Magnificent Stranger without informing him – and no one bothered to tell him he was a top box office attraction in Europe. Ultimately, Leone’s success made him a hot property, too, and a sequel was ordered up. Eastwood agreed to star in For a Few Dollars More, albeit for a lot more than a few dollars more than his first outing with Leone. This time, Leone was armed with a higher budget and was able to import another American actor to co-star with Eastwood, Lee Van Cleef. The chemistry between the two stars, playing friendly rivals, was magic on screen and the film became another blockbuster.

By this point, David V. Picker, head of production at United Artists, had been reading about the grosses of these films, which had been dubbed “Spaghetti Westerns.” Picker met with Leone, screened the films, and made a deal to dub and distribute them in the United States. He also agreed to front a comparatively huge budget for Leone to make a third Western, The Good, the Bad and the Ugly. The film re-teamed Eastwood with Van Cleef (as a different character) and added Eli Wallach to the mix in a performance worthy of an Oscar nomination. The movies had been shot betweem 1964-1966, but A Fistful of Dollars was not released in America until 1967 due to delays from a lawsuit by Japanese director Akira Kurosawa. Seems that the naïve Leone had simply adapted Kurosawa’s masterpiece Yojimbo as a Western without bothering to get permission for the rights to do so.

Both A Fistful of Dollars and For a Few Dollars More were released in English-speaking markets by United Artists in 1967. Both became major box office hits. The Good, the Bad and the Ugly was released in 1968 and became by far the highest grossing film of the trilogy. Leone wanted to team with Eastwood for more Man With No Name adventures, but Eastwood had by that point completed his work on Rawhide, which CBS finally canceled in 1966. He was eager to move on to other projects and try his hand as director. He did not want to be pigeonholed as the star of Spaghetti Westerns. He even refused to make a cameo appearance in the opening of Leone’s epic film Once Upon a Time in the West. 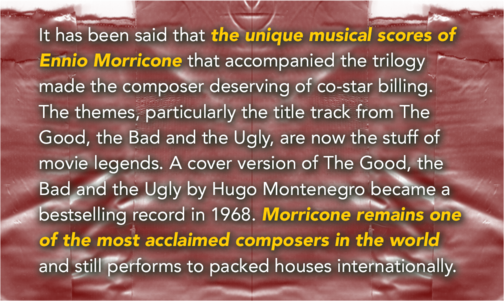 The rest, as they say, is history. Eastwood morphed from being a popular leading man to being an acclaimed, Oscar-winning director, though it would take decades for the critical establishment to take him seriously. His relationship with Leone had been strained due to his aversion to appearing in more Italian Westerns, but the two men reconciled over dinner in 1988 when Eastwood’s Charlie Parker biopic, Bird, opened to wide acclaim at the Cannes Film Festival. Leone died shortly thereafter and Eastwood realized that his old friend and mentor did not want to die until they had put their differences aside.

The Man With No Name trilogy revolutionized the action film genre, and having been analyzed by the critics the way the works of Ingmar Bergman and Orson Welles have been analyzed, today they are regarded as classics. Not a bad legacy for a minor project that Clint Eastwood thought few people would ever see.

He had a name. It was only mentioned once.
Manco. Cant remember which movie probably the first one. It was mentioned at the beginning..

Lee Pfeiffer is the co-founder and Editor-in-Chief of Cinema Retro magazine, which is dedicated entirely to films of the 1960s and 1970s. He is the author/co-author of numerous books about classic films including the bestselling The Essential James Bond, as well as books about such legendary actors as John Wayne, Clint Eastwood, Sean Connery, Tom Hanks and Harrison Ford. His latest book is Cinema Sex Sirens, a tribute to the actresses whose glamour and style defined their public images. Pfeiffer has also taught film courses at NYU, produced documentaries about classic films and periodically conducts movie location tours in the USA and Great Britain. He lives in New Jersey.