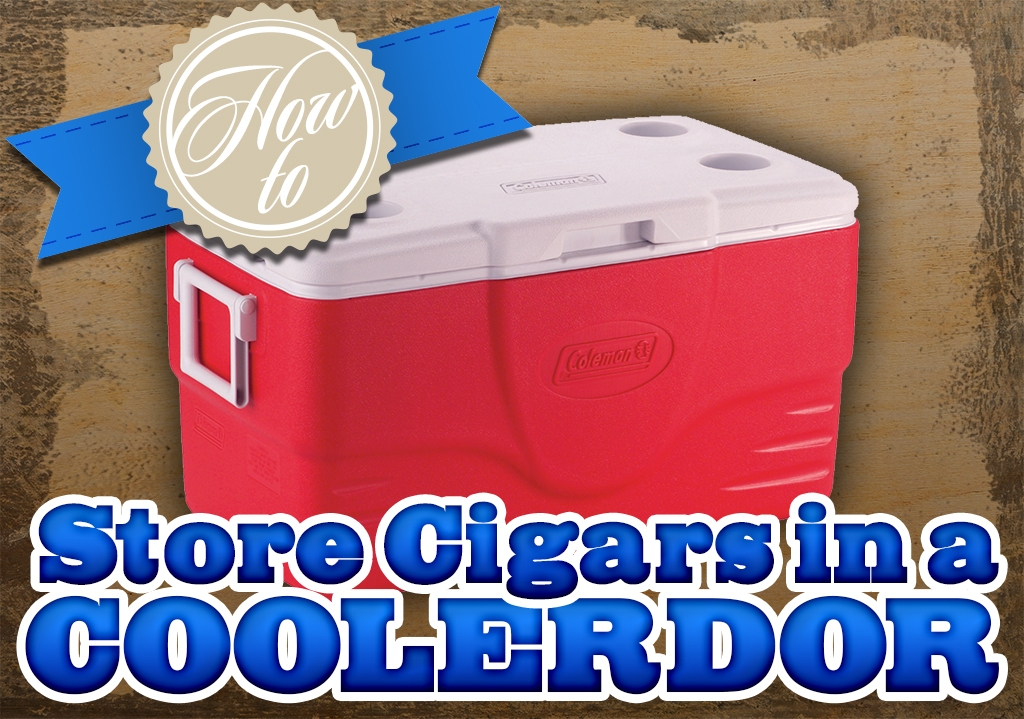 Have you ever found yourself in a situation where you have so many cigars you’ve run out of room to store them? It’s happened to me. Several years ago, I went on a cigar box buying binge and realized that even with 5 decent sized humidors, I had no room for the extra boxes. Though I was never a cheerleader for keeping my cigars in anything other than a traditional cigar humidor, I felt that maybe it was time for a change and decided to make a coolerdor (a.k.a. a “tupperdor”) for my overstock. I figured, why not? I had received numerous emails over the years from some very resourceful cigar smokers who have had great success with homegrown humidors made from beer coolers, storage bins, even old refrigerators. Besides having an overabundance of cigars – and there’s nothing wrong with that – some cigar smokers just don’t want to deal with the expense of buying a big cedar lined humidor. Moreover, traditional wooden humidors for sale can run anywhere from $49.95 to $4,995.00.

So, let’s get into making and how to store cigars in a coolerdor. First, decide how much room you’ll need for your cigars, and take into account if you’ll be storing loose cigars (singles), cigar boxes, or both. In my case, I used my coolerdor specifically for boxes. I’ll get into why later on. 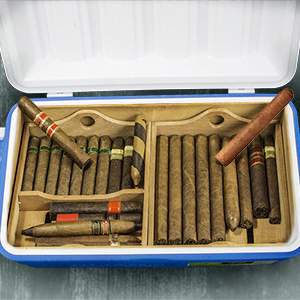 The reason I only keep factory boxed cigars in my coolerdor is because I like that fact that they will continue to age in their cedar boxes. So you get the best of both worlds: A closed, virtually air-tight system and the advantage of cedar aging as it’s done in the factory. As my traditional humidors begin to empty out, I move my coolerdor cigars in.

In an article we ran in CigarAdvisor some time ago titled “How my Katrinador Saved my Cigars,” the writer, Bob “The Reverend Hurricane” Meyn, detailed the benefits of building his coolerdor. He used a 36-qt. red cooler, lined it with Spanish cedar planks, and because he has a lot of single cigars, used old cigar boxes for storage and purchased a big humidifier. Since the Rev lives in New Orleans, which tends to flood during the occasional hurricane, here’s what he wrote:

“The Katrinador has actually saved The Rev’s cigars once floating briefly in a hotel pool in Birmingham, Alabama during the evacuation of New Orleans during Hurricane Katrina,” wrote the Rev.

The Rev also noted that his Katrinador has “functioned as well as any expensive humidor and easily outperformed them for maintaining the quality of my smokes, which in my opinion, is the real purpose of a humidor.” Based on the experience I’ve had with my coolerdor, all I can add to that is, AMEN.

Though I don’t want to discourage anyone from buying a traditional humidor, if you’d rather spend your money on more cigars, the choice is yours.

[…] a humidor seems too pricey for cigars you're moving to storage, you can make your own out of a cooler. "You can essentially create a cooler-dor out of any container that's dark when […]

[…] an alternative that is very inexpensive, works 100% as well as the best cabinets, and is infinitely expandable, look into a “coolerdor.” This is a plastic thermal cooler which has been cleaned and emptied for use as a sealed […]

Did you leave open the drain or keep closed? Thanks for sharing your knowledge!

Reading Time: 6 minutes A limited edition, with a shade wrapper grown in Brazil’s Bahia region—a big first for Macanudo, and part of a complex blend that also boasts a proprietary Dominican filler leaf. Watch now as the panel reveals what else makes it special.

Are cigars addictive or just a habit?