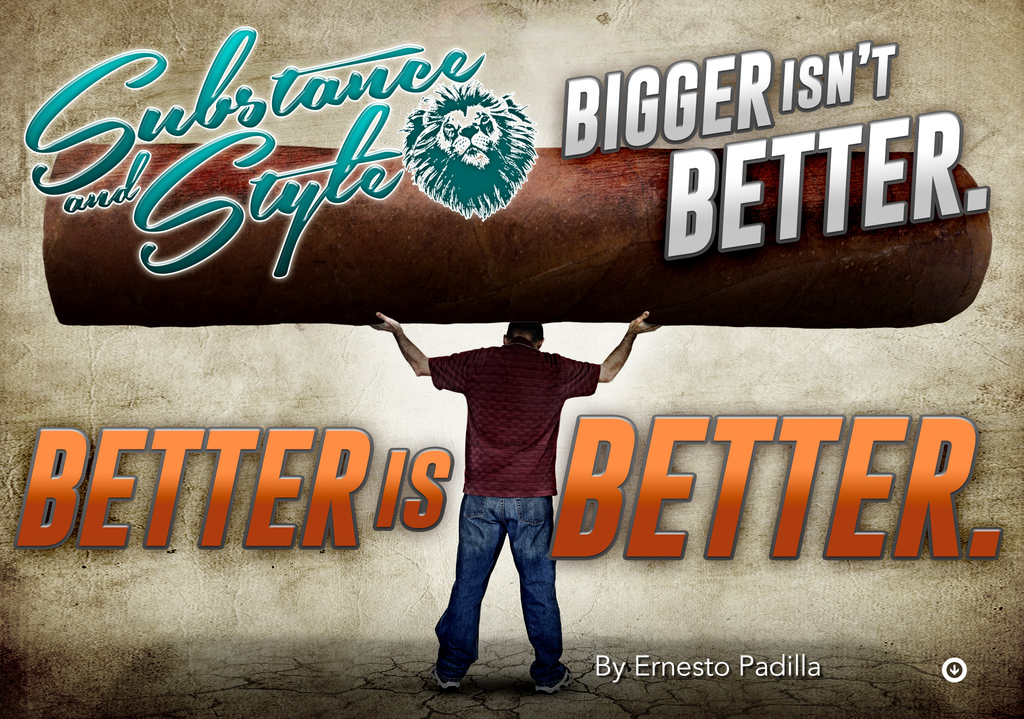 I’ll admit it: when I saw my first big ring cigar, I never thought in a million years that the trend would catch on. But here we are in 2013, and the proliferation of 60-ring Behemoths is not only here to stay – the cigars are getting even bigger.

We’re in the throes of a cigar arms race.

To each their own, I guess, but with all due respect, I am not a fan. Making and smoking cigars, there’s better balance and flavors in smaller rings – you get the best of both worlds.

To a certain extent, I get it. Cigars are an expression of power in a lot of contexts, so the bigger the cigar, the greater the power, and who doesn’t like feeling powerful? It’s like buying the fastest muscle car on the lot: your life may be falling apart all around you, but when you turn the key and stomp on the gas, it’s the feeling of power that you’re paying a premium for.

I suspect there’s a certain tough-guy psychological underpinning as well. I can’t tell you the number of times I’ve seen guys walk into a cigar shop looking for “the biggest, strongest cigar you got,” like it’s a challenge. It’s not. Cigars are about enjoying yourself.

As a consumer of cigars, it’s just silly. Once you get past a 56 ring, it doesn’t appeal to me at all. These cigars are not comfortable to smoke, and quite frankly are more than a little phallic. Besides, for a 60-ring or bigger, you’re looking at an investment of 2 or more hours. If you want to smoke longer, why not just light up a second cigar?

When I blend, for example, I work with a Toro. Why? Because a Toro blend can be tweaked to work in a slightly shorter, longer, fatter, or thinner vitola. Personally, I like a Corona Gorda (5 5/8 x 46). It’s elegant and balanced; it feels great in the hand, and comfortable in the mouth.

But people love to say things like, “you get more complexity out of a bigger ring,” or “they burn cooler.” By that rationale, should we expect to see a regular-production 90-ring cigar? I’ve heard a rumor that there’s one heading for the market, actually. It’ll probably sell like hotcakes.

That brings me to my second point: as a manufacturer of cigars, the math just doesn’t add up. Knowing what premium cigar tobacco costs (a lot), how can these price points be viable, if the tobaccos are as good as what’s found in smaller traditional vitolas?

I think that many big-ring smokers are making a value judgment, i.e. “I’m getting more for my money.” Meanwhile, you’re proportionally getting more viso because packing these caveman clubs with ligero would be cost-prohibitive. You’re also getting less wrapper leaf, proportionally speaking, than you get with a traditionally-sized cigar. Wrapper leaf is typically the highest-quality and, therefore, the most expensive tobacco in any given premium cigar.

So are you getting a larger object? Yes. But over a 60 ring, and the blend starts to break down. Think jug wine: this larger object also contains more “filler” and less of the good stuff. To me, it’s all about quality of flavor, not quantity.

As for a cooler burn, if you’re finding that your cigars smoke hot, try smoking slower, storing your cigars at a higher humidity, or buying a quality cigar to begin with. Problem solved.

At the end of the day, companies are looking for any little niche to sell more, because that’s what companies do. It’s a function of capitalism. I’m not saying that’s a bad thing…I love capitalism. Making a market is the American way, and you have to admire the planning and hard work it takes to identify and develop a particular market segment.

But ask yourself this: why weren’t these humongous shapes around for the first couple hundred years of modern cigar-making? Extreme marketing has duped a lot of people into chasing after things they think they want, but which they may not actually, genuinely like.

Americans are being sold a lifestyle of excess, where bigger food, bigger drinks, and bigger houses really mean bigger waistlines, bigger debt, and bigger problems. Living the Good Life necessitates sifting through the bullshit for yourself, and realizing that BIGGER isn’t better; BETTER is better.

Read More
Cigar Ratings & Reviews
The Gran Habano #5 Corojo has been a tried-and-true go-to cigar since I discovered it 15 years ago...and to this day, still doesn't disappoint. See my Gran Habano review and get my tasting notes to find out more about My Weekend Cigar!
Read More

Learn the game played by James Bond: A Baccarat Primer