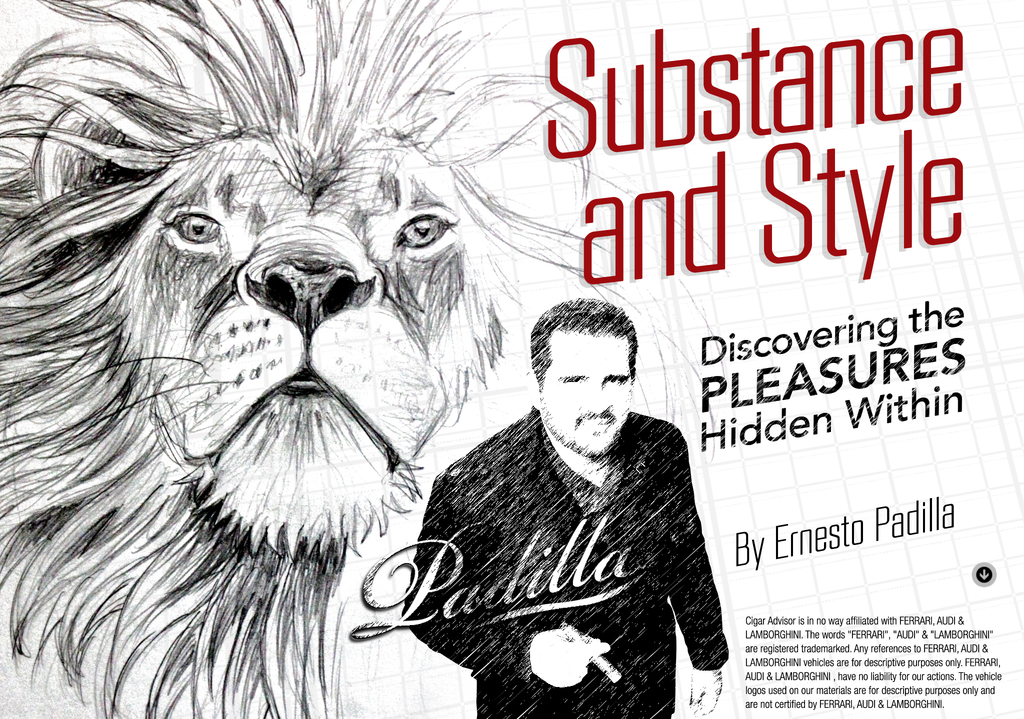 In 2004, I launched a boutique cigar company that focuses on the small-scale, artisan blending of tobaccos using old school craftsmanship. What you may not know is that my background is actually in design.

In fact, you couldsay that design defines my perspective on everything, including cigars. When I create a cigar blend, for example, the process is often parallel, with the tobaccos and branding elements informing each other until they synergize into a singularity of form and function.

You see, good design is more than just making something “look nice.” It’s substance benefiting from style. It is enjoying your cigar in quiet solitude, with the moment heightened by the aesthetics of the band and box.

Good design is also honest: it makes a promise, and then delivers. It’s the way a top-shelf Scotch or wine label commands your attention, persuading you to discover the pleasures hidden within.

Don’t believe me? Let me ask you this: have you ever stood next to an exotic sports car?

“Think design doesn’t matter? Which would you rather drive?”

I recently had the opportunity to do exactly that during a racing experience with Miami Exotic Auto Racing. [It is an experience I recommend to anyone with a driver’s license and a pulse.]

I arrived at the track anxious to get behind the wheel, only to be redirected to a classroom. “Safety first,” they said, and after some instruction on traction, cornering, braking-basically the physics of high speed driving-I have to admit that they were right. There is a lot more to driving fast than stomping on the accelerator.

With certificate in hand, it was finally time to meet the cars: a Lamborghini Gallardo LP 570-4 Superleggera, a Ferrari 430, and an Audi R8 5.2 FSI quattro. As a car guy and lover of the good life, I was excited. But as a designer, I was beside myself.

In nature, forms with curves tend to be more feminine, while streamlined forms are “built for speed.” These cars defined the intersection of curvy and streamlined…sexy and aggressive, at the same time. As I walked onto the track, it hit me: these cars look fast without moving.

Each of the cars shares a mid-engine layout which places the engine behind the cabin, ahead of the rear axle-basically, in the back seat. This functional measure results in superior balance and handling, as well as improvements in acceleration and braking, while allowing for a more aerodynamically-sound front end.

But there’s more to looking fast than a sculpted hood. From their sleek lines to their oversized wheels and brakes, to the vents, spoilers, air dams, and diffusers that channel air through, into, and around the car, everything about the designs says, “Behold: I am mind-numbingly fast.”

And yet despite their similarities, each car promises (and delivers) something totally different.

The Lambo’s angular body bears one of the most recognizable logos in the world, Lamborghini’s Raging Bull-fitting, given the sensation of pure, unrestricted power that overcomes the driver.

The Superleggera is outfitted with carbon fiber, making it the lightest road-going model in the range. Its 5.2-liter V10 is capable of 562 horsepower at 8500 RPM, easily achieving 60 mph in 3.4 seconds

When idle, the engine growls like a caged beast; hit the throttle, and it becomes visceral, raw, and downright menacing. I was literally taken aback by the Lambo’s power; it seemed somehow impossible that a car this substantial could so effortlessly pin me against my seat.

The Lamborghini is not a luxury car so much as an over-the-top street-legal racer. With a suede dash and bold use of color, its interior was by far the loudest of the three. Its steeply-angled windshield lends a dramatic look, while allowing room for its enormous wheels (if impeding visibility somewhat).

Still, for a car costing roughly a quarter million dollars, I was surprised by how sparse the interior actually was-it didn’t even have power seats! But by eliminating the weight associated with the typical “bells and whistles,” the designers and engineers realized an incremental performance gain. This process is by no means limited to the interior, and each such revision nets a cumulative gain in performance.

While the cavallino rampante (prancing horse) design has been used since antiquity, it is most synonymous with Italian supercar manufacturer Ferrari. Here again, the car delivered an experience on par with the promise of its branding: a well-bred juxtaposition of power and agility.

Even this entry-level Ferrari looks less “extreme muscle car” and more “tactical strike fighter.” Stepping into the cockpit, the dash was dominated by the tachometer, an obvious nod to Ferrari’s racing heritage. Though modern, it retained an air of its classic history, right down to the superb stitching detail.

Driving a car with this much power requires more management than a gearshift, pedals and a steering wheel. Ferrari really shined here by employing two technologies borrowed from its single-seat F1 racers: an electronic differential (E-Diff),as well as a steering wheel-mounted commutator switch, which allows the driver to select from a number of different handling presets. Both are world-firsts in a production car.

The result is a car that was as exhilarating around the turns as it was on the straight-aways, where I managed a quarter mile in less than 12 seconds. Talk about blowing your hair back!

When you think “supercar,” you may not think “Audi.” I know I didn’t. But that all changed with the R8, which was easily the biggest surprise of the three.

Many are unaware that the four rings in the Audi logo represent four companies that merged to form the company. This collaborative spirit is apparent in the heavily-edited design of the R8 and other Audi models.

The R8 looks conspicuously different from the Lambo or Ferrari. That’s not to say that it’s unimpressive, because it definitely looks the part. But if Ferrari’s design is rooted in its racing pedigree and Lamborghini’s in sculpture, then the R8 is a rocket ship disguised as a luxury coupé.

The R8’s interior also differentiated itself from the rest of the pack. This was not the spartan cabin of the Lambo or the Ferrari; instead, it had many of the creature comforts you’d expect from an upscale luxury car, including comfortable power seats.

Any lingering doubts I had disappeared when I got it onto the track. As I hit the throttle, the 5.2-liter V10 roared to life like a fucking jet engine. With 525 horses screaming at over 8000 RPM, it was every bit a high-performance machine. All that power was capably managed by Audi’s legendary quattro all-wheel drive system, which dynamically adjusts power to the wheels with the best traction. In short, you would have to try pretty hard to lose control of the car.

All in all, I found the Audi understated, but all-business. This is the supercar to get for “ever day.”

The concentration required to safely operate these machines at speed is positively liberating. When you’re doing 140 mph or better around the track, you’re not thinking about your girlfriend bitching at you, or paying your bills, or what you’re going to have for dinner. Instead, the adrenaline and g-forces working on your body force you to focus all of your energies on the task at hand.

And after leaving the track, you are fundamentally changed for the better. Although I will admit some disappointment getting back into my car, stepping away from my day-to-day life and into these supercars really put things into perspective.

Finding a way to clear your head is a Good Life imperative, and how you choose to do it is entirely up to you. But whether it’s a Ferrari or a cigar, the experience will be enhanced because of design.

Reading Time: 10 minutes AJ has created some of the industry’s highest scoring premiums, but now it’s cigar lovers like you who get their say! Check out the top-rated AJ Fernandez cigars chosen by Famous Smoke customers who have scored these picks as 5 stars – see if you agree, or get a new suggestion for an AJF cigar that’s right for you.