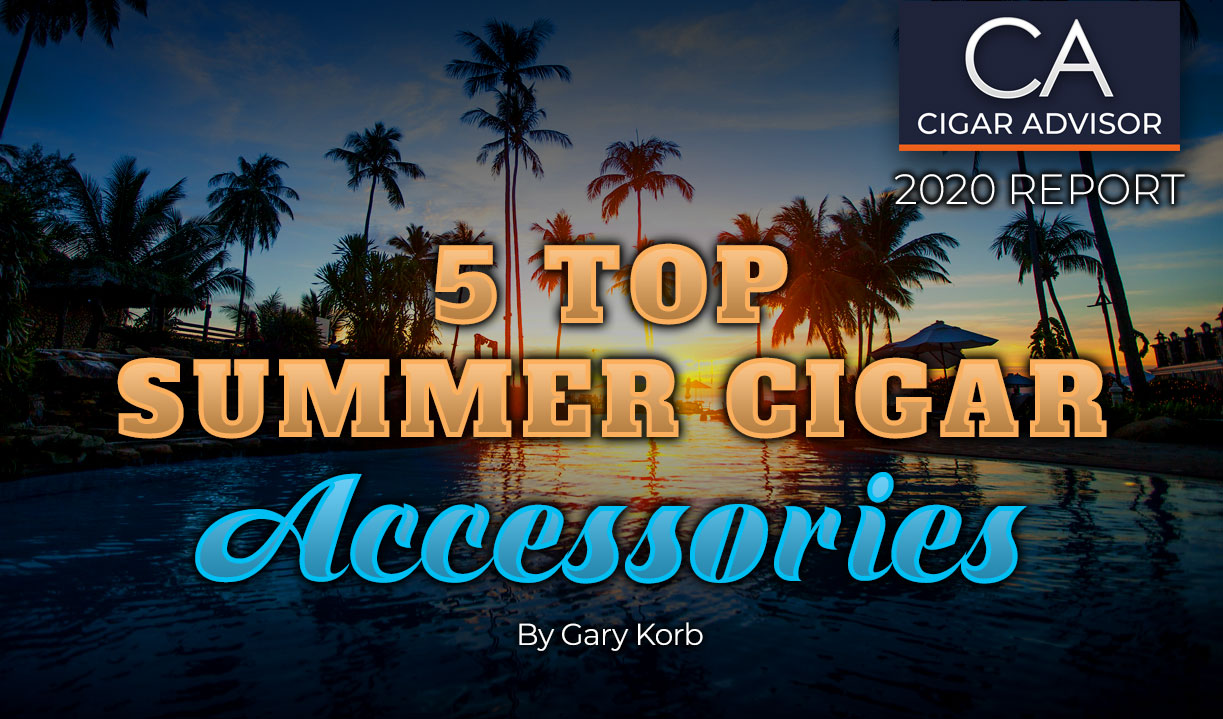 With summer now in full swing, more cigar smokers around the country have been able to take advantage of warmer weather. And since more cigars are now being smoked, that means a lot more lighters are flicking and cutters are clacking. Since increased usage may also be taking a toll on your accessories, you may be in need of either replacing some of them, or just looking to expand your cigar accessory collection.

With that in mind, I took the liberty of finding five trusty season-friendly cigar accessories, one in each category, that will get you through the summer months and beyond.

If you watch our Cigar Advisor videos fairly regularly, you may have seen me use my Xikar XO cutter a number of times. I love it, not just for its unique shape and planetary gear system, but it cuts great, and can handle cigars up to one inch in diameter.

This year, Xikar doubled down on its XO platform by introducing the Xikar Ensō cigar cutter. At a glance, Ensō looks just like its predecessor, but comes with some nice improvements, starting with it being much lighter and thinner.

What’s with the name?

In Japanese ink painting, ensō is a circle hand-drawn in one spontaneous brushstroke to express a moment when the mind is free to let the body create. (Sort of what I do before I begin writing an article.) Ensō also symbolizes absolute enlightenment, strength, elegance, the universe, and mu (the void). That’s some pretty heavy stuff.

The Xikar Ensō also works on a planetary gear system for a smooth glide and even pressure, but it only has one handle instead of two. As it’s depressed, the two opposing blades move into position and. . .CHOMP! The cutter also locks into place once the cut is completed. Additionally, it’s capable of cutting cigars up to a 68 ring—and yes, your Asylum 13 Seventies will be just fine.

For one, it’s 98% steel and built like a tank. It’s much lighter in weight, and as to the blades, they’re sharp as sharp can get. The price is up there, but it won’t set you back as much as the XO. Plus, it comes with Xikar’s lifetime warranty. If you like things that are cool and  innovative, the Xikar Ensō’s got the goods.

Once cigars began appearing in 60, 70, and 80 ring diameters on a regular basis, logic would follow that cigar lighters needed to step up to the challenge. And even though I’ve found that a good triple flame torch will do the trick very effectively on cigars from 50 ring and beyond, there is a case to be made for quad flame lighters. So, it’s no surprise that a number of four jet models have shown up in cigar store display cases.

At just under four inches in height and little more than two inches wide, the Jetline Avalanche doesn’t just rest on your table or desktop, it has presence. Flip back the cap and the four jets are ignited by a push-up ignition button. The burners are set in a square configuration and produce a powerful flame that’s easy to adjust.

One of the more novel features is the flame turns from blue to red. The reason for this is that the flame is easier to see in daylight. And if you’ve ever lit a cigar out in the bright summer sunlight, you‘ve probably seen plenty of scorched wrappers as a result.

If the bulk of the cigars you’re smoking this summer are of the wide-body variety, the Avalanche is more than up to the task and easy to use. Plus, it’s always nice to have a good table lighter among your accessories, especially if you also smoke with friends. As for the price, it’s about right for table lighters of this caliber, and odds are you‘ll find it on sale.

If you’re like a lot of other cigar smokers, and have been stocking up over the summer months, you may be in need of more space. Call me a traditionalist, but even though Tupperdors and the like can be effective for keeping your cigars fresh, there’s nothing like a wood-crafted, Spanish cedar-lined humidor for aging your precious primos. Take this Craftsman’s Bench Rustic model, for instance. It’s got a unique, eye-catching appearance that sets it apart from the plain vanilla models, and comes at a very reasonable price.

Measuring at 13½″ x 8½″ x 5″, there’s enough real estate to house up to 90 cigars. The walls are nice and thick, lined with fragrant Spanish cedar, and the lid offers a solid seal aided by the more stable, quadrant-style hinges. The box also includes a cedar divider, a foam humidifier, and an analog hygrometer. The base has a felt bottom to prevent scratching whatever surface it is resting on, and the exterior has that wonderful, worn-in look, giving it a more “manly” appearance, too. (Especially if you’re a guy who doesn’t live in a log cabin, but wish you did.)

Craftsman’s Bench has acquired a pretty solid reputation for making top-quality humidors and listed at just under $100, the Rustic is a good value, and should satisfy even newer cigar smokers with a growing collection. The only drawback is the foam-based humidifier.  I suggest you replace it with a more efficient and reliable 100 ct. crystal-based humidifier. The analog hygrometer is fine, but if you also want temperature and a little more accuracy, go for a digital hygrometer. Set-up instructions are included, but you might also want to look into a Boveda humidor starter kit. And finally, if you want a closer look, check out this Craftsman’s Bench Rustic humidor video.

Now, what can you say about an ashtray to make it sexy? It has one function. It catches ashes. Then again, there are some ashtrays that are better than others. I like this Crystal Tobacco Leaf Ashtray, mostly for its aesthetic attributes, meaning, the tobacco leaf reflecting through the underside just does it for me.

First of all, it’s no lightweight. This four-seater weighs about three pounds and it’s made from uber-clear K9 crystal, which picks up the image of the leaf in 3D, from practically every angle. Plus, its five and three-quarter inch–square dimensions don’t eat up too much space. Speaking of space, it has a nice deep bowl, which helps, especially when more than two saddles are being used. And, the saddles are wide enough to handle some of the bigger-sized guns.

The Crystal Tobacco Leaf ashtray is perfect for the cigar smoker who wants to appoint their smoking space or man cave with tobacco-related paraphernalia. More importantly, it’s highly practical, reasonably priced, and oozes opulence even when it’s filled with ashes.

I wanted to get something in here for the multitude of golfers out there, and here it is—the DivPro cigar holder and divot tool. This is one of those “all-in-one” tools that comes in handy in a multitude of ways. (I always envy people who come up with these ideas.)

Where to begin? Let’s start with the benefit to your cigars. The DivPro allows you to set your cigars down safely between drives, lay-ups, putts, etc. And that’s a good thing because you never want to place your cigar on the grass. What I’m driving at is, how do you think they get the grass so green in the first place? Keeping your cigar above ground keeps fertilizer and who knows what else out of your mouth. But that’s just for starters. The DivPro is also an effective divot replacement tool, a golf ball marker, a club head cleaner, and can also open cans and bottles. Plus, the cigar holder feature also doubles as a grip saver, so you don’t have to lie your club flat on the ground. It does practically everything but drive the cart. (I heard they’re working on that.)

Listed at under $15, the DivPro pays for itself. It also fits easily in your pants or golf bag pocket, making it extremely convenient. And even if you don’t use all of the tools, odds are you’ll use at least a few of them. If you’re not a golfer, you probably clicked-off the page by now. But if you are, this little tool may be every bit as necessary as your golf balls and clubs. See you at the 19th hole!

How to Keep Your Cigars Safe from Humidor Mold