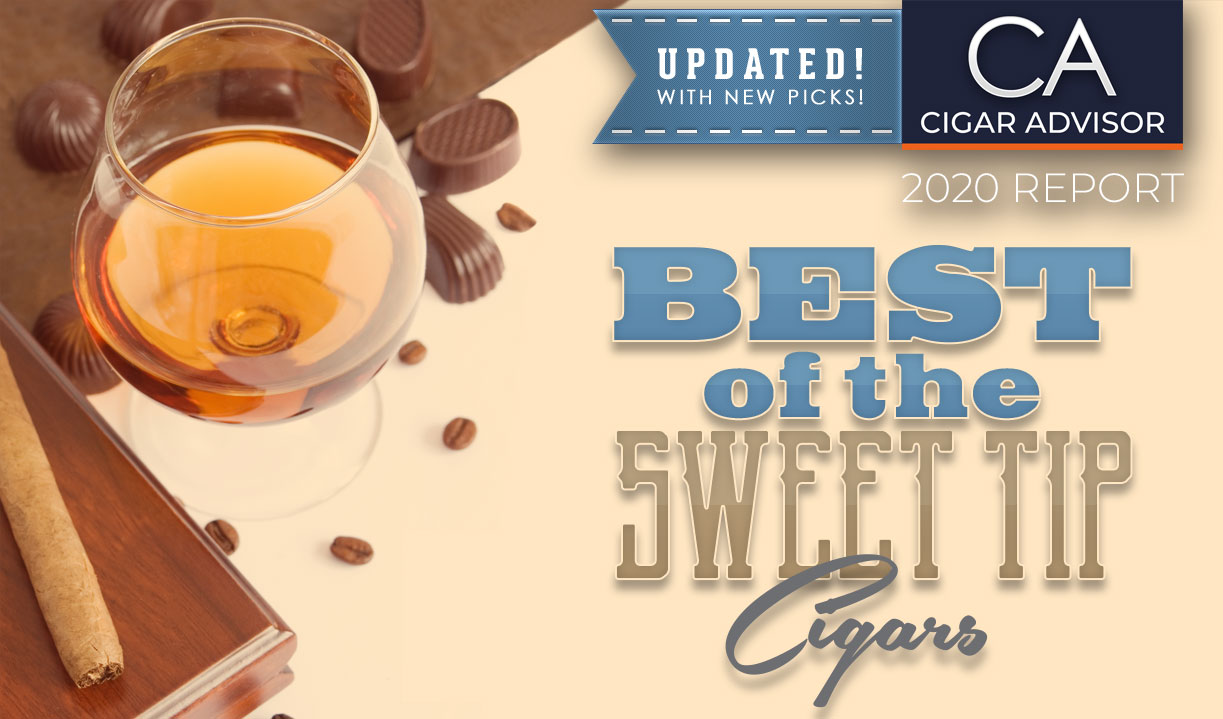 What is it about some cigar smokers? When they‘re told that a particular cigar is sweet tipped, they view it as having somehow been tainted. Like it should be wearing a scarlet letter or something. Get out the PPE! Well, you may be surprised to learn that there are a lot of cigar smokers who really like having a little extra icing on their cake.

Of course, the vast majority of traditionally blended premiums do not have sweetened caps, but the vast majority, if not all, flavor infused cigars do. And a lot of veteran cigar lovers tend to avoid those, too.

This report is about sweet tipped cigars that are blended without infused flavors. If you’ve never smoked one, there are a number of traditionally blended cigars with sweet caps that are worth adding into your rotation—or at least worth trying. So, if you’re totally turned-off by sweet tipped cigars, this article isn’t for you. Otherwise, stick around. We may just pique your interest. . .

There’s not much on record with respect to a history of the sweet tipped or sweet capped cigar. I presume, like a lot of things cigars, it started in Cuba. But one article I found noted that they were especially popular in the years prior to World War II, and that both premium and budget cigar manufacturers made them. The torcedor would use a sweetened gum when finishing the cigar’s cap. It’s that simple. One reason for doing this was to mask some of the harsher qualities of the tobacco, while also sweetening the cigar’s aroma. One wonders about the quality of the tobaccos used when you have to cover it up with sugar. Then there are a lot of cigar smokers who just like that nip of sugar when they take a puff, regardless.

Sometimes you don’t even know a cigar has a sweet tip until after you buy it. That was the case for me with the Asylum Insidious cigars. My first was the Corona in the Connecticut shade wrapper. But since I have a fondness for Mexican San Andrés maduro wrapper, I found this Insidious Maduro Toro more to my taste. That said, both cigars offer a mellow smoke that leans to the medium side in strength. The core blend is all Honduran long-filler, good quality, too, and this Toro reveals pleasant notes of cocoa, cedar, and sweet spice. A very relaxing smoke, as well. Think of Asylum Insidious as a Baccarat who knows somebody—like Tom Lazuka.

Speak of the devil. Even Baccarat cigars—known for having sweet caps, not to mention one of the biggest selling cigars in the entire world—went a skosh bolder with the Baccarat Nicaragua selection. Using a heartier core of Nicaraguan long-fillers coiled in a Sumatra binder, a darkish, Nicaraguan Habano wrapper completes the medium-bodied recipe. Unlike the original Baccarat cigars with their Honduran Connecticut seed wrappers, the Baccarat Nicaragua Rothschild is more of an acquired taste. The profile offers a smooth, yet earthier smoke with base notes of cedar, leather, and sweet spice with a slightly peppery retrohale. If you enjoy Nicaraguan forward blends the price is nice, too. Baccarat is one brand that really delivers good quality, consistency, and value.

Camacho built its reputation on being bold and very traditional. So, when this Scorpion Sweet Tip selection was released it was a little surprising. It doesn’t have the full-flavored kick of its Camacho brethren, but it’s very tasty, especially the Robusto. An Ecuador Connecticut shade wrapper sets the stage followed by a Mexican binder and Honduran long-fillers. Once lit, the cigar reveals a creamy, mellow to medium-bodied mix of cedar, leather, roasted nuts, and sweet spice for a sweeter, milder, change-of-pace Camacho. The Scorpion Sweet Tip seems a bit more newbie-centric, making it ideal for those who want a faithful representation of the Camacho’s hearty profile, while playing it cool.

Well, who’d a thunk it? Even I thought this mega-selling line via Drew Estate was infused, but uh-uh. Fat Bottom Betty sure is aromatic (I know, that sounds a little weird.), but it’s the blend of exotic and not so exotic tobaccos from all over the world—maybe even some grown in Sturgis—that make for its unique flavor and aroma. The sweetened cap I expected, but the Connecticut Broadleaf wrapper has plenty of juicy sweetness to lend, too. Betty is medium–bodied straight down the line and serves up a cocktail of dried fruit, cocoa, nutmeg leather, and sweet tobacco with a spark of white pepper on the finish. That mix also makes for some complex turns at various intervals. OK, so Betty’s not exactly the prettiest of the Yummy Bitches, but she’s definitely the most interesting.

This is the cigar that introduced me to my first sweet tipped cigar. When I finally decided to buy them (I started with the 5X50), I got a vibe that I would like them. Has that ever happened to you? Sometimes you just know. The sweetened cap surprised me, but I got used to it, because the flavor was fantastic. All Nicaraguan at its heart, the smoke is dark and earthy with a perfect balance of sweet and peppery spices that somehow manage to eek out a spot of caramel. Plus, the Sumatra wrappers add even more spice to both the flavor pool and the aroma. For lovers of rich, spicy, medium-plus strength cigars, these FDO’s have always been a great value. All-in-all, a nice everyday treat that illustrates Oliva’s outstanding quality in a value priced selection.

Why am I including Sobremesa Brûlée as a bonus pick? Well, you see, a lot of cigar smokers who smoked them when they hit store shelves last year were convinced that they had sweetened caps—and that included me. Oh yes, that cold draw is an eye opener. Then I said to myself, Steve doesn’t do sweet tipped cigars. As it turns out, I was right, but the debate continued. Steve even wrote about it. (It’s how the wrappers are cured.)

I mention the Brûlée because it really is that naturally sweet. But it’s more than that, too. Sobremesa Brûlée faithfully captures that sweet, mellow, and creamy flavor profile of the classic Connecticut shade blends beloved by the Greatest Generation.

I haven’t seen anywhere else that the Brulee Blue is sweet tipped. Do you know that for sure?

Hi Harrison –
True. And thanks for pointing that out. In the Sobremesa Brulee Robusto review I did with Steve Saka, he said that Brulee Blue is blended to have a little more body than the original Brulee. Apparently, I was misinformed and have removed that inference from the article. G-~

Read More
Cigar Buying Guides
Sure, we all have our standby and go-to smokes – but with grill & beach season here, a couple of fresh additions to the travel humidor are in order. Meet the 2018 cigars of Summer: not only do we recommend adding them to your lineup, you just might end up smoking them on repeat all season…see our list!
Read More