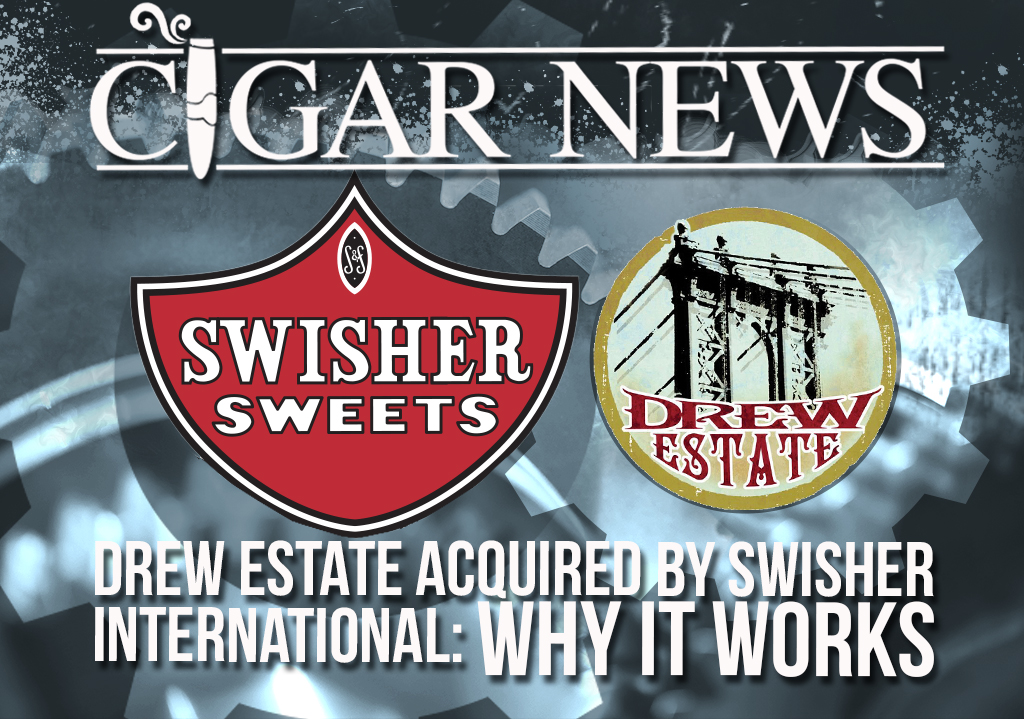 Swisher buys Drew Estate. One week later: the sky is not falling, hell hath not frozen over, and there’s nary a winged pig soaring bravely through the night sky. The rumblings we have all heard on the forums and blog sites were true: Drew Estate, the makers of the acclaimed Liga, Acid, and Unico lines, has been bought by Swisher International. Now, a lot of the reactions I’ve seen on social media have been the virtual equivalent to Three Mile Island and the bombing of Nagasaki all wrapped up into one flaming crapstorm of panic. But is it warranted? Sure, if you want an excuse to launch a few cinderblocks through cigar shop windows nationwide, trying to stock up on “pre-acquisition” Drew Estate cigars. But instead of panicking, I believe this to be a massive win for Drew Estate and Swisher International. Swisher haters be warned: you won’t be hating for much longer, so get it out of your system now.

When premium cigar smokers think Swisher, they unfairly think of sub-par machine mades. I’m not going to start discrediting Swisher anytime soon, especially if you look at the direction Swisher is heading: you’ll see that under the leadership of new(ish) CEO and President Peter Ghiloni, they’re blowing the doors off their factory trying to expand their portfolio with premium cigars. Swisher International is following in the footsteps of cigar kingpins Villiger, who made their name on machine made cigars who now make some of the best handmade stogies on the market. Villiger, however, built their recent handmade empire from the ground up over a few years; Swisher seems to be simply expediting the process. They created their premium Royal Gold line, and acquired Drew Estate to speed up the process by leveraging DE’s skill and guidance to create more stellar premium cigar lines. Take a hard look at  Royal Gold, and you can begin to see how this acquisition makes a crazy amount of sense.

If you’ve never heard of Royal Gold cigars, they make 4 premium cigar lines, all of which earn stellar ratings. There is the Nirvana, Kismet, Casino Gold, and Gold Strike. Of those 4, one of their best selling, and perhaps the top ranked, is the Nirvana, blended and made by…Drew Estate. The pre-purchase partnership helped Swisher to no end by incorporating a new and exciting premium into their portfolio, and probably realized the smart play in continuing with Drew Estate by their side. DE’s team of blenders, rollers, and leadership takes the championship belt in the industry; all three are qualities that Swisher needs to continue making their premium cigars successful. With Drew Estate’s guidance, we’re going to see some amazing cigars being produced  – and maybe even with a Swisher label on the box.

But what does Drew Estate get out of all this? It sounds like Swisher is going to make Drew Estate produce premium cigars for them, and the Drew Estate lines will go the way of Old Yeller. I can all but guarantee this won’t be the case. The Drew Estate name has clout. It has a cult following unlike any other cigar manufacturer out there, and nobody wants to risk losing it. Instead, it’s important to realize Swisher International has deeper pockets than a boutique like Drew Estate, which I believe is a pretty big factor. Swisher can afford to shell out money for the DE guys to not only experiment with new blends that are just as good as what they already put out, but also help Swisher expand their own premium market and allow Royal Gold cigars to reach new consumers through the DE fan base. In short, Swisher’s monetary backing will fund the expansion of brand new Drew Estate lines, and possibly expand the lines we already love! At the same time, All of Drew Estate’s management team will still oversee all operations and make sure the brand stays on par to the standards it is know for. So not only is the brand healthy, it’s going to grow significantly.

But the biggest benefit I see going to Drew Estate in this acquisition is protection, of sorts. Both companies are in a massive pickle with the proposed FDA legislation going before the White House Office of Management and Budget for approval and finalization. Within these proposed regulations is a full-on ban of flavored or infused cigars, which includes Drew Estate’s entire Acid, Tabak, Natural, and Java lineup, and seemingly half of everything Swisher makes. The impact of the legislation will affect both companies differently: if the companies stayed independent and the proposed legislation goes through, Swisher has the capital to stay afloat; Drew Estate, on the other hand, could struggle. If their top selling infused and flavored lines die because of legislation, it would most likely mark the end of Drew Estate as a whole since they hold far less assets in reserve than Swisher International. If Acid and DE’s flavored cigars goes down due to legislation, it’s doubtful that Liga could prop up the company by itself – and the DE brand suffers. Does that mean no more Liga, no more Unicos, no more MUWAT? No idea. But by agreeing to be part of the Swisher family, almost every non-flavored nationally recognized Drew Estate product will enjoy the backstop of funding and distribution offered by their new parent company, and the brands will live on to fill your humidors.

Now, allow me to play devil’s advocate and present a downside: what we can take from the Drew Estate acquisition, along with the Toraño acquisition by General, is a sudden growing trend of big cigar companies buying up smaller and boutique cigar manufacturers. Its part of the big fish’s game to eat up the smaller fish that are taking over a larger share of the pond, and assimilate to a rapidly changing market. The bigger players can rely on their storied go-to brands, while at the same time trying to produce boutique-like cigars to obtain a chunk of that smaller market. By buying up smaller manufacturers, bigger manufacturers are able to capture this market with more ease without dedicating resources away from their main lines. This movement is also being perpetuated by an obviously massive payday for the little guy, and a fear that FDA legislation may ruin the small cigar manufacturer. The smaller players need safe haven, so they’re more motivated to sell to save the brand, and for higher worth. Add that to smaller companies that don’t sell being run out of business, and I have to wonder if we’re entering a situation where the government is essentially forcing a possible oligopoly within the cigar industry, whittling the ownership groups down – only to start harassing them over anti-trust violations.

Back to reality; although this is a fast occurring trend, the chances of it running that deep is slim to none.

So basically, this acquisition works in favor of both parties. Swisher gets to leverage a popular and reputable cigar company that has a mass following to help it conceptualize and produce amazing new cigars. Drew Estate as a whole enjoys shelter from the FDA if Acid is eradicated due to legislation. At the same time, DE will receive a great source of monetary support to create newer cigars with even more interesting tobaccos to add to their already stellar portfolio. I believe we’re going to witness a slew of new, high quality, premium cigars by both Swisher and Drew Estate. So although you may think this is the end of the line for Drew Estate, I say this is only the beginning to an incredible partnership that will only benefit both brands.

good insights and thoughts thanks

Great insight and spot on in my opinion. Cheers.

Excellent…I always felt at some point the real true boutique cigar makers who have created wonderful lines like Drew Estate should have the chance to grow and have more money infused so they can do greater things..I feel this is a great combo.

When I first read the article’s title, I had what was probably the same knee jerk reaction as many DE followers: a scream of terror followed by a few minutes of angry swearing as I tried to stave off the looming dread over the presumed loss of my future relaxation.
However, I read the article and must concede that in light of the reasoned point of view that Jonathon provides, as well as actual facts about the already positive collaborations between the companies that I had been unaware of, I am far more hopeful fur the future of DE and now find myself interested in the future of Swisher.
Thanks for the insight Jonathan, I appreciate the pillow you provided to catch me on my fall from what I feared was my last ACID trip.

Yeah but what happend to the Papa’s Fritas, you know the one that took all that extra labor to reorganize the scraps from the number 9, are they making it stilll or what???

Villager? Some of the best cigars on the market? 🤣🤣🤣🤣🤣🤣🤣🤣🤣🤣🤣🤣🤣
You gotta be kidding. They make some of the cheapest garbage smokes around.

BTW, that pic of you w the cigar? Oh brother 🙄

Reading Time: 4 minutes Gary makes his case for the Romeo y Julieta House of Romeo being not only one of the best Romeo exclusives, but the best Romeos in general. Watch now – and check out the choice of whiskey that was made for this full-flavored blend.