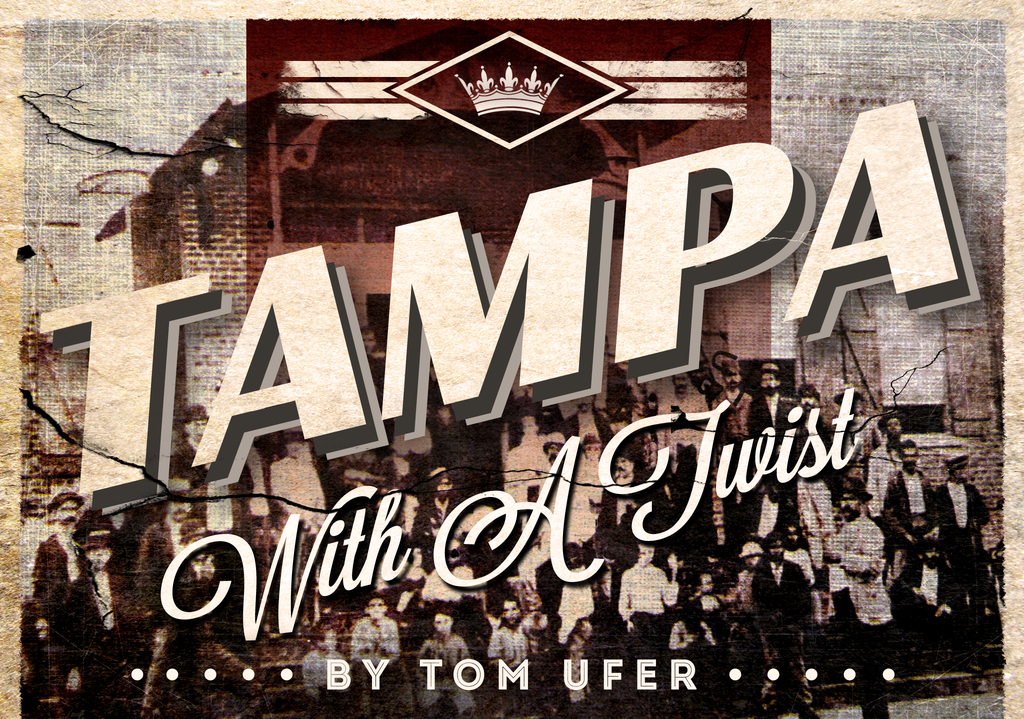 Tampa With a Twist

The cigar industry in Tampa began in 1886 when Vicente Martinez Ybor, visiting from Key West, bought 40 acres of land and founded Ybor City. From that beginning and for more than 50 years thereafter, Ybor City became the “Cigar Capitol of the World.”

Ybor City was populated by a mix of Italians, Cubans and Spaniards. They came from Cuba or from Key West, FL, which was another large cigar manufacturing area until labor problems brought owners north looking for a new start.

While the V.M. Ybor cigar factory was the first factory to be built, it was the second factory to actually produce cigars. One notable event that took place at the factory was when Jose Marti gave a speech on its front steps in 1893. He was in Ybor City raising funds for the Cuban Revolution.

Actually, until the Cuban embargo, 100% of the cigars made in Tampa used Cuban tobacco. Two or three years after the embargo, supplies of Cuban tobacco were exhausted. Since they could no longer purchase Cuban tobacco, the smaller companies wanted to get out of manufacturing. These companies were either bought up by larger competitors or simply went out of business.

Once Cuban farmers began to flee from their homeland, larger companies started to explore other tobacco growing areas such as Cameroon, Africa, the Connecticut Valley, as well as Nicaragua, Honduras and the Dominican Republic.

As things progressed, the rising cost of tobacco and labor caused the majority of cigar companies to move out of Tampa and relocate to countries where it was cheaper to operate. During Ybor City’s cigar making heyday, there were hundreds of factories, manufacturing millions of cigars, for thousands of brands each year. Some of those brand names have survived through the years such as Bering, Cuesta Rey, Garcia y Vega and Don Vicente.

Founded in 1895, by Julius Caesar Newman, J.C. Newman came to Tampa in 1954 from Cleveland, Ohio. They moved into the Regensburg factory which was built in 1910. It was one of the last and largest cigar factories ever built in Tampa. Its nickname was El Reloj, Spanish for “The Clock.” The factory building has a large clock tower with bells that were used by the Ybor community to keep track of the time. The bell tower eventually fell into disrepair, and in 2002 the Newman’s restored the bells which now chime again after decades of silence.

Last year, Arturo Fuente cigars celebrated 100 years of tradition. Arturo Fuente started the business from the back of his Ybor City house in 1912. His sons Arturo and Carlos were with him from “day one.” Since then, Carlos and his son Carlos “Carlito” Fuente, Jr have moved their operations to the Dominican Republic. Carlos’ brother, Arturo, stayed in Ybor City and opened a retail operation that is now run by fourth generation family members.

Another building, the “Charles The Great” cigar factory in Ybor City, is also owned by the Fuente family. Starting in 2010, the Fuente’s began a historic restoration of the building that will be completed in 2014.

Not to be confused with Oliva Cigars in Estelí Nicaragua, the Oliva Tobacco Company has been a family owned business in Tampa since 1934. The Oliva family owns farmland in the Caribbean as well as South and Central America. While you may not have heard of them before, they supply premium tobacco to many major cigar manufacturers.

Even if you haven’t heard of the Olivas, you certainly know their product. Their tobacco is used in cigars made by Altadis (Montecristo Classic, Romeo y Julieta Reserva, Trinidad), J.C. Newman (Cuesta Rey Centro Fino, Diamond Crown Maximus), Arturo Fuente (green bands, Don Carlos), La Riqueza (#1 and #2), Drew Estate (Liga Privada) and others made by Rocky Patel, Don Pepin, Tatuaje, My Father and General Cigar to name a few more.

A smoking ban imposed on the Cigar Capitol of the World?

On July 1, 2003, smoking was banned statewide in all enclosed workplaces in Florida. Exempted were private residences, retail tobacco shops, designated smoking rooms in hotels/motels and stand-alone bars with no more than 10% of revenue from food sales.

Fortunately, the Tampa Bay area has several dozen great cigar lounges to choose from. Moreover, with its excellent weather, outdoor smoking isn’t much of a problem. Unfortunately, a few landmark restaurants that were great destinations for a fine meal and an after-dinner cigar became off limits.

Out of the hundreds of cigar factories that existed in Ybor City and West Tampa, only about two dozen are still standing. Besides the factories mentioned above, others have changed owners many times over the years. For example, the V.M. Ybor factory is now owned by the Church of Scientology, and is used as both an administration building and a place of assembly.

If you walk up and down Ybor City’s 7th Ave or “La Setima,” you will come across storefront businesses with cigar rollers showing off their skills in the windows. These are the Mom & Pop stores keeping the tradition of hand-rolled cigars alive in the community.

During the past couple of years, several new Tampa-based boutique cigar companies have come on the scene. They are Ares Contreras with Pride Cigars, Matt Urbano with Urbano Cigars, Dr. Giacomo Guggino with Giacomo Cigars, and the team of Felix Lopez and Steven Tabak with Lopez-Tabak Tobacalero’s La Vida Cigars.

Although these brands all have manufacturing facilities in either Nicaragua or the Dominican Republic, I like to think that these newer companies also help maintain Tampa’s cigar tradition.

Speaking of tradition, Ybor City knows how to celebrate it in style. Some of the old mutual aid societies such as the L’Unione Italiana and the El Circulo Cubano or Cuban Club, still hold functions and are available for private parties. These two clubs continue to meet in the original buildings constructed in the early 1900’s and are remarkably well-maintained.

The Ybor City Museum Society has done an excellent job in preserving the legacy of Tampa’s “Cigar Capitol” status. The museum features many displays and an actual “casita” or cigar roller’s home that you can walk through. The historical collection is housed in the old Ferlita Bakery. Along with cigar related items, the museum documents the culture of Ybor City’s past. In addition to the museum, the Society has held the Ybor City Heritage and Cigar Festival there for the past 14 years. At the festival, not only can you visit the museum, you can also meet up with manufacturers and retailers to celebrate with music, food and cigars.

If you’re a cigar smoker and interested in history, add a trip to Tampa to your “bucket list.” Visit Ybor City and imagine what life was like in the past as you explore the architecture of the old factories and other surviving buildings. After that, stop in at one of the cigar lounges on 7th Avenue and pick up a favorite cigar, or better yet, a fresh, handrolled smoke with your choice of beverage and enjoy one of life’s greatest pleasures in one of the cigar world’s most unique and fascinating locations.