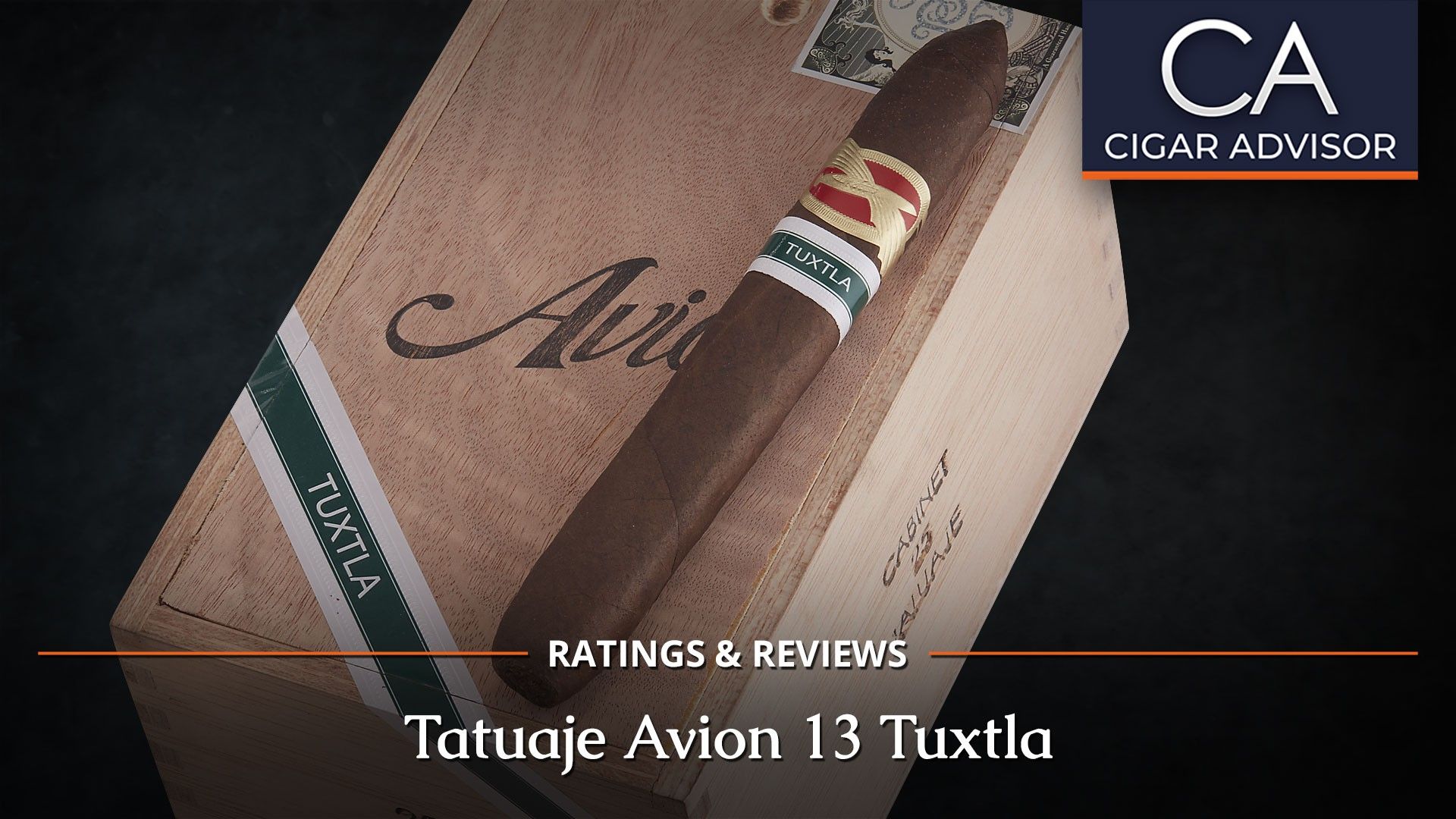 Earlier this year Pete Johnson created three new cigars featuring dark Mexican San Andrés wrappers over Nicaraguan binder and fillers. If that combination sounds familiar, in 2019 Pete released the Tatuaje Mexican Experiment and Tatuaje ME II, so there’s a history. This latest Avion 13 project is called “Tuxtla” after the city located in Mexico’s famed San Andrés tobacco growing region and the center of the country’s premium cigar industry. Inspired by the Tatuaje Fausto Avion selections—all box-pressed perfectos—and limited to only 2,000 boxes, the Avion 13 is one of three Tuxtla releases; the other two are the Tatuaje 7th Tuxtla and the Tatuaje T110 Tuxtla cigars, also limited editions.

“I’m excited for people to try these cigars,” said Johnson in one press announcement. “The San Andrés wrapper really shows how much the wrapper can change the flavor of a cigar. We are very particular when using San Andrés making sure we use it on blends that can stand up to the heavier flavor. I think these blends work perfectly.”

Summary: Right off the bat, the first thing I noticed was that the Tatuaje Avion 13 Tuxtla was a formidable cigar. I think my exact words were something to the effect of, ‘a big mamma jamma.’ The second item of note was the shape—a box pressed Perfecto isn’t a common vitola.

I was surprised with how easily the Avion 13 Tuxtla fired up and that the draw was right where I like it—easy but with a hint of resistance. This is worth mentioning because—at least for me—Perfectos are among the most finicky cigar shapes.

As far as flavor is concerned, the first part of the Avion 13 Tuxtla kicked off with cinnamon, black pepper, anise, dark chocolate, and strong black coffee. The strength and body are medium, and the profile is rich and balanced.

Throughout, the Avion 13 Tuxtla’s flavor profile remains largely unchanged except for the addition of leather, peanuts, and creaminess in the second half. Strength and body build slightly to medium-plus as the cigar winds to a close.

My overall impression of this cigar is largely positive with a few minor caveats. One is that the Avion 13 Tuxtla is a time-consuming endeavor—topping out at 2+ hours. The other is that this is a cigar that needs to be smoked slowly—I’d say 90 seconds at least between draws—to get the maximum enjoyment. But if you’re in the market for a rich, deeply flavored, assertive cigar—the Tatuaje Avion 13 Tuxtla is worth your time.

Construction: Doesn’t look Maduro, more of a coffee bean color. Soft press figurado is a nice shape – wrapper is slightly oily, very veiny and with very fine tooth. Body is soft to the squeeze.
Draw: Good airflow, with decent rips of smoke.
Pre-light flavor: Smell is hay, barnwood and fermented tobacco. Taste is woody, earth, leather and a little crisp cool mint.
Toasting & Light: A mouthful of pepper, plus a hint of earth and molasses.
Base flavors: Black and red pepper, wood, espresso, sweetness.
Retrohale: Combo of pepper and cocoa sweetness.
Aroma: N/A.
Burn & Ash Quality: The shape lends itself to a wonky burn at the start; a touch up will help that. Ash is mostly grey, a little flaky, and holds on for about ¾”.

Summary: The first half bonds with your taste buds over a profile that offers coffee, leather, earth and a whole lot of pepper. While it feels like the Tuxtla tries to flex and show some strength, it’s really only medium (maybe medium-plus); and it’s hard to get ahead of that long, heavy, honey-sweet finish. By second half, it’s clear the Tuxtla is very good at throwing some enjoyable flavors into the mix, and producing them consistently, so as to achieve balance. If you’re looking for a powerhouse stick, this Tatuaje Tuxtla isn’t it…this has more nuance from start to finish.

I enjoyed this more than I thought – probably because I expect a certain “something” from Tatuaje cigars, and the Tuxtla didn’t play to the stereotype. Is that a good thing? I guess it depends on if you smoke Tats. If you like maduro, I’m pretty sure you’ll like this; if you like San Andres Maduro, you’ll love it. Like me, if you expected too much body or strength, you’ll be pleasantly surprised. And if you tend to avoid figurados or box press shape cigars, the effects are actually quite subtle. So with all of these excuses removed, and there are no other reasons to talk yourself out of it – give the Tatuaje Avion Tuxtla a chance, and I bet you’ll be pleasantly surprised like I was.

Summary: One thing is clear from the toast light—Tatuaje Tuxtla Avion 13 is not a beginner’s smoke, but it’s not exactly the no-holds-barred assault we’ve come to expect from Tatuaje, either. My cigar review sample unleashed a king’s ransom of smoke throughout my smoking session that was laced with earth, spices, coffee, and a steady current of brown sugar. If you’ve come looking for Mexican San Andres sweetness, you won’t be disappointed. 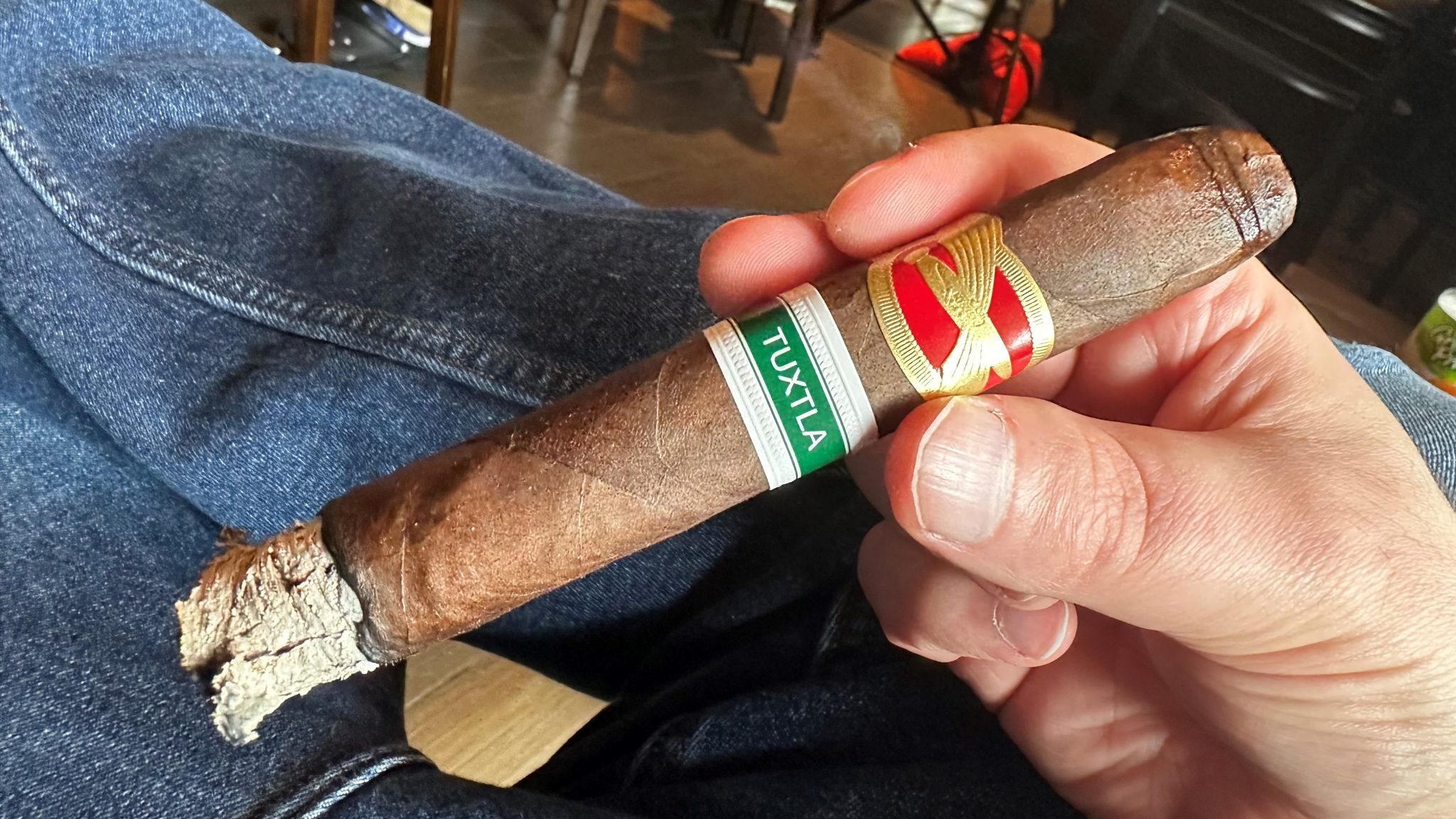 In Avion 13’s second third, a non-distinct meaty flavor emerged, and while and though the pepper has remained on the lighter side, the cigar builds in nicotine strength. Full-bodied flavor, medium-plus strength. Flavors here are still quite earthy. Additionally, some leathery notes pop up to balance the sweetness. The smoke still has a mouth-wateringly syrupy texture.

Tuxtla Avion 13 ends mostly as it began with only 3-4 flavors out on the field. I got the most mileage out of the cigar’s midsection as it’s the sweetest, but I’d bet that my super clean palate made this an even more enjoyable experience. Light this up after a short smoking sabbatical and you’ll find a performance swinging for the bleachers.

Construction: Superb. The wrapper is flawless, all one nice milk chocolate color. The rolling and pressing are seamless, the latter being more round than angled. The cigar has a nice firm feel to it and I found no soft spots.
Draw: Very good.
Pre-light flavor: Leather, chocolate, and tart fruit.
Toasting & Light: Earth and chocolate nibs with a hearty dose of pepper.
Base flavors: Earth, dark chocolate, and espresso with light pepper on the finish.
Retrohale: N/A
Aroma: Sharp.
Burn & Ash Quality: Burn was mostly even, while the ash was firm with a limestone color.

Summary: If you want to get the most out of this luxurious perfecto, take your time and let it smoke itself. Hitting on it too often may cause some smokers to feel queasy. Now, with that caveat aside, I was impressed that the cigar never went full bore on strength. There’s a lot going on in there, and by taking your time you’ll reap the Avion 13 Tuxtla’s rewards. 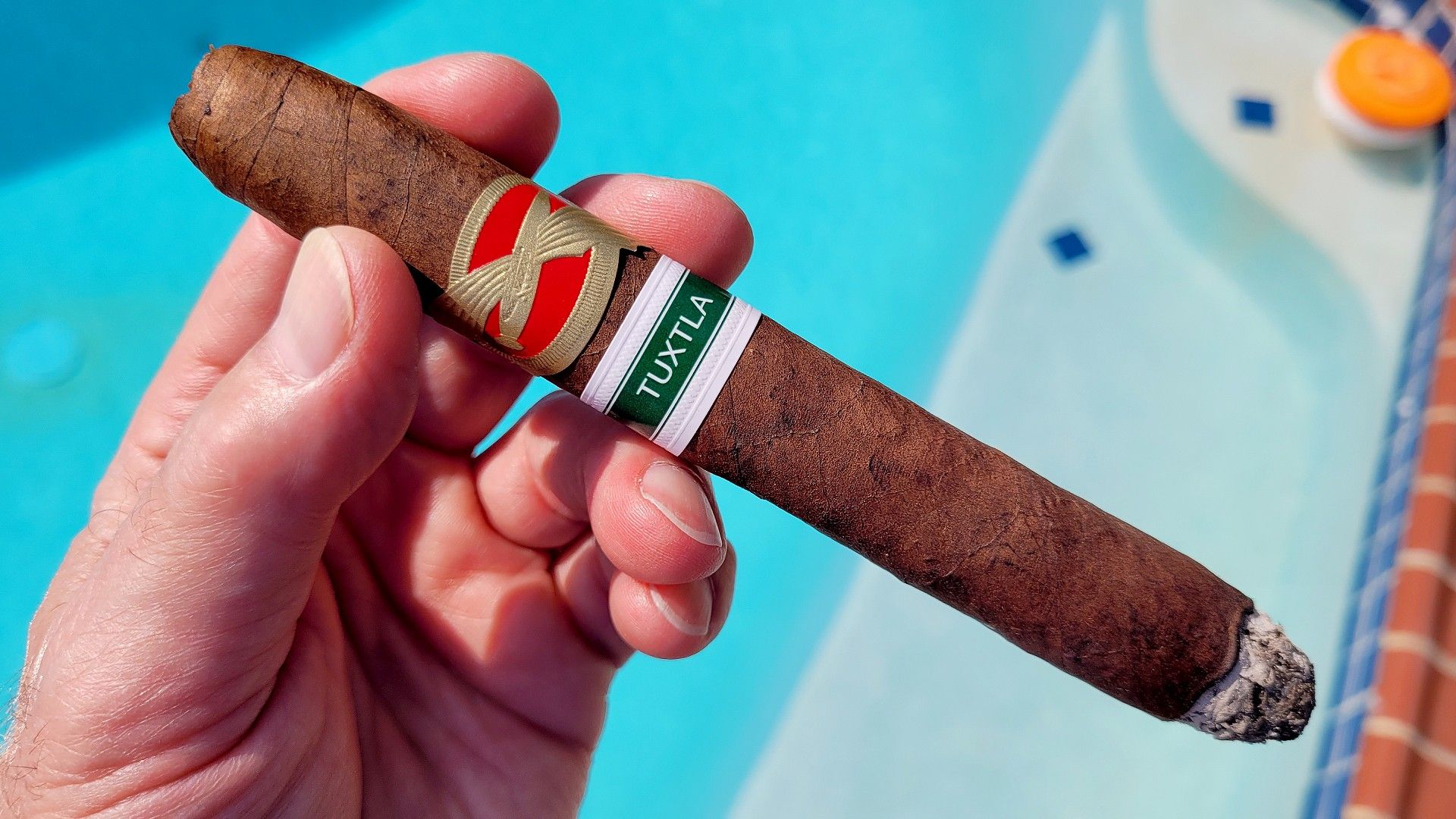 The cigar opens smooth, creamy, and mellow, with some peppery spice and a long finish. That’s a preview of what’s to come because the flavors of earth and chocolate nibs begin to intensify as the burn moves toward the midsection. Espresso is also revealed at that juncture as the cigar becomes more medium in body as the pepper lightens-up. Still very smooth and balanced, the smoke shifts to medium-full in the last three inches. For what it’s worth, I also tasted a note of almond butter and very dark tobacco.

This is what I would call a very “adult cigar.” It’s why I think the Avion 13 Tuxtla is suited for experienced cigar smokers. By comparison, for those who have had San Andrés maduro wrapper cigars like the HVC Cerro, Aganorsa Leaf Maduro, or San Lotano Requiem Maduro cigars, the Avion 13 should be quite a treat.

Reading Time: 2 minutes Fan Mail returns: so many questions have come in since our last presentation it was hard to choose, but some of topics we’re talking about today include tips for cutting extra-wide ring gauge cigars, a trick to unplug a torch lighter, plus questions about Maduro and cigar flavor profiles…watch our videos now!