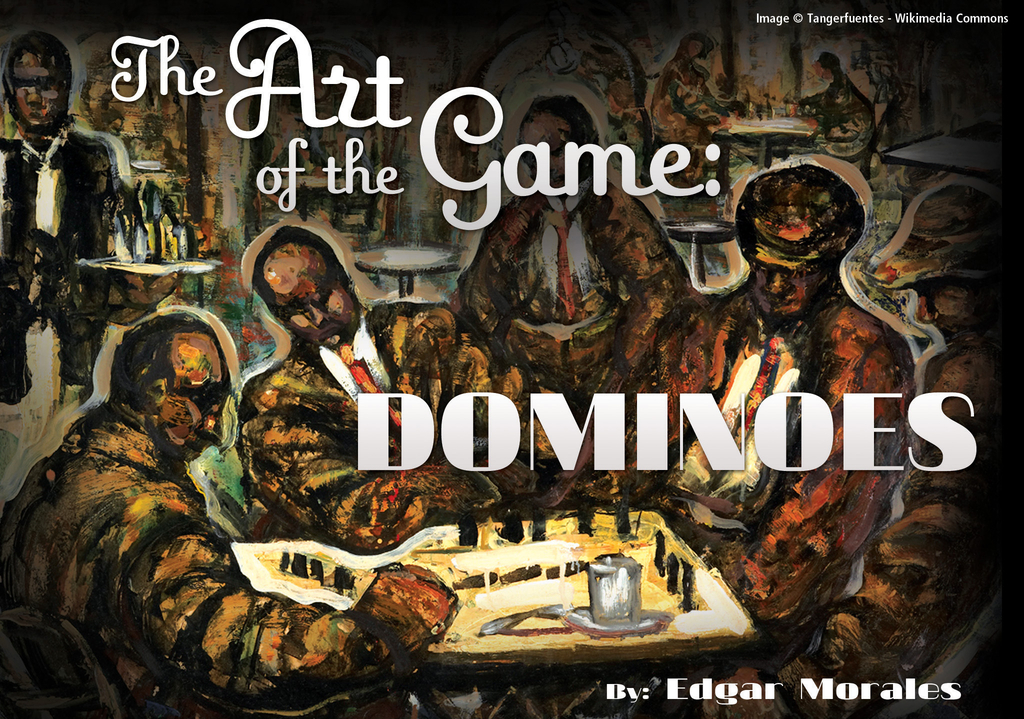 The Art of the Game: Dominoes

Cigars and dominoes seem to have gone hand in hand for, well, ever. Which got us thinking – why? Well, what do you do with a bunch of friends when you enjoy a cigar? It's usually some kind of get together, you're talking, maybe a deck of cards come out – or a set of dominoes, predominantly when you're talking in terms about Latin culture. So that led to our next question: why is playing dominoes such a huge part of that?

Turns out, there really is no “why.” Edgar says, “We love to be social. And playing dominoes is just a part of any given social event. We like to share. Go into any Latino house, at any given time, and they're not going to ask you if you want something to eat – they just serve you. You could be full, but you're gonna eat. It's a way of sharing – camaraderie – inviting you in to be a part of who we are.” So to understand the marriage of dominoes and cigars, is to understand how a game gets started in the first place. “When we get together we eat, we drink, we play – or whatever turns you on…like having a cigar. Most of the time it's during the summer, so we're likely outside – which is a great place to enjoy a smoke. Out on the patio, chewing the fat – and the rest of the family is watching us play, because it's just as much a spectator sport.”

Dominoes is a pastime enjoyed by many here in the States and abroad. For example, in the Caribbean Islands and Latin America it’s part of daily life. After work you go to your local watering hole, have a couple of beers or some rum, smoke a good cigar to unwind from your day, and partake with some friends in a couple of games of dominoes.

Dominoes is also a cross-generational game. In the Latin culture you learn to play at an early age at home with your parents. Usually the older you are the better you are at playing the game. Plus, with age comes wisdom. This usually includes patience, strategic thinking, and tracking what your opponent is playing. 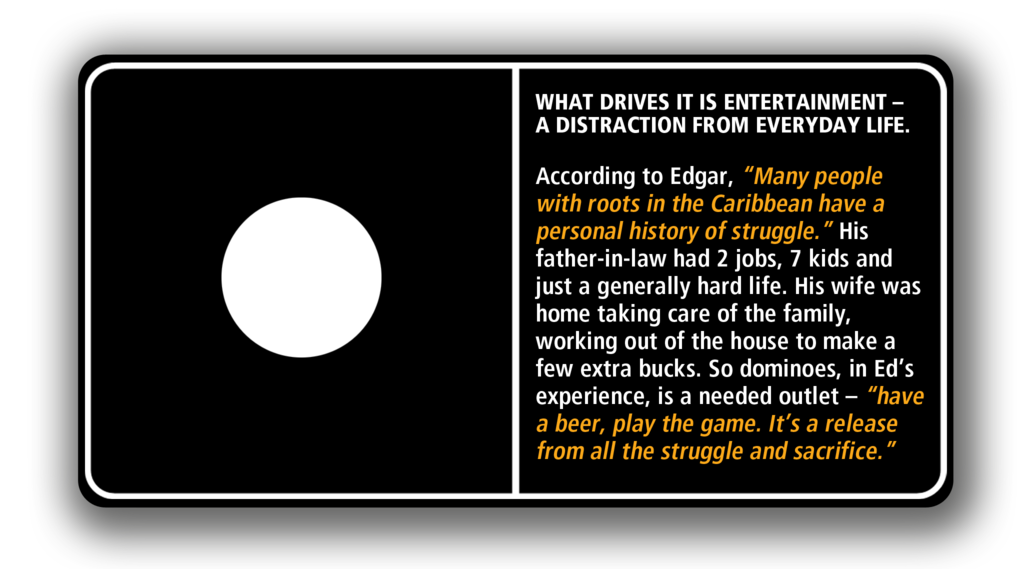 Although dominoes is often played by two people, it is traditionally played by four people, or two teams. The objective is to get rid of all your tiles before your opponent does. Sounds simple, right? Not so fast! First, you must understand which pieces your opponent is holding. This can range anywhere from a double 0 through a double 6 and everything in between. The other part of this strategy is understanding your partner, determining who has the best shot of winning the game, and playing to your partner's strength without impeding your game. The objective is reaching 500 points by winning, then counting what pieces are leftover and adding them up by counting the dots or “pips” on each leftover tile. 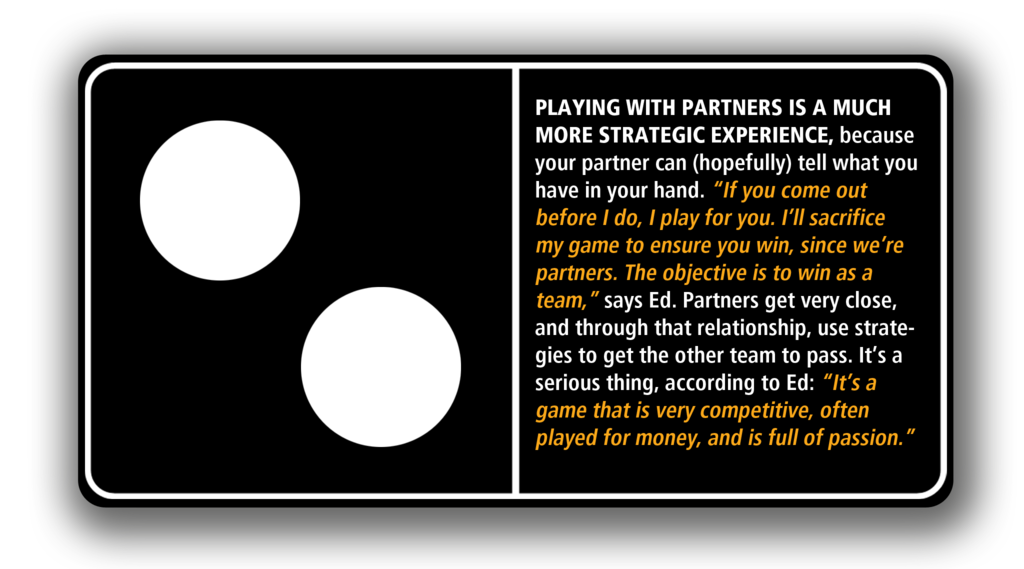 For a standard game of “Draw” with four players, in which the numbers go from double zero to double six, there are a total of 49 pieces. At the start of the game, each player randomly selects seven tiles which are placed in the middle of the board face-down.

During a match, the person or team with the highest double number tile goes first. All subsequent games can start with any tile. For example, if double 6 is the first piece on the table, the next player must have at least one 6 in his “hand.” If the next player puts down the [6 ' 2] tile, then the next player must now produce either a tile with a 2 or a 6, and so on. Once the game gets going, if you or your partner does not have a matching tile, you must draw a tile from “the bone yard” until you find a match. Remember, you want to have as few tiles as possible, so the bone yard could spell death for you later in the game. 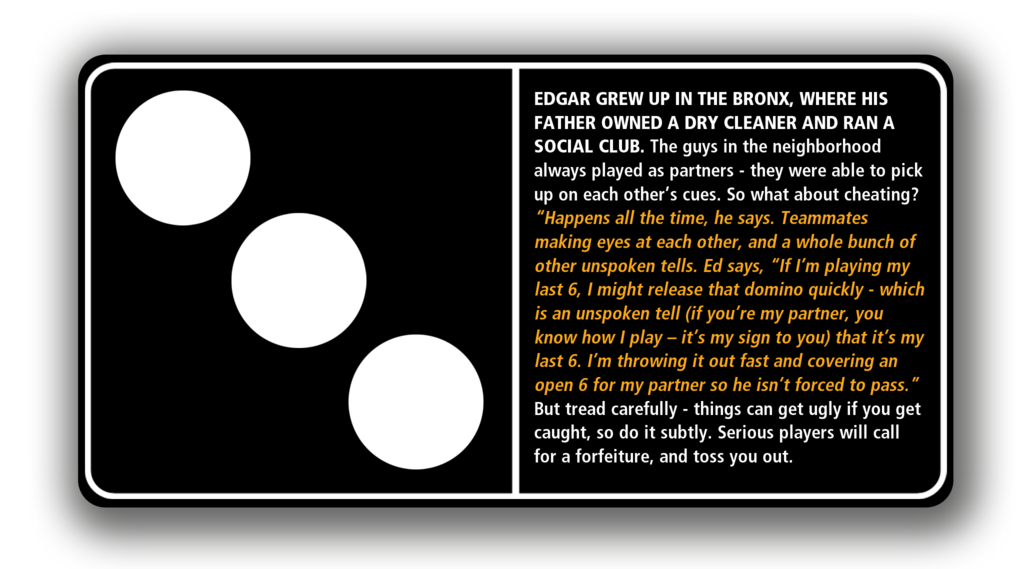 In this version of the game, the winner of each of the first four games gets a bonus: 100 points for winning the first, 75 for the second, 50 for the third game and 25 extra points for coming out on top in the fourth. And there are bonuses within the bonuses, which can happen anytime throughout the match. Matches are played to 500, and if you win one of the games with a tile that is anything other than a double, and can be played on either end of the tile line, that's a 100-point bonus to you – for capicú. Win a game with a double zero, chalk up an additional 100 points for chuchazo. But let me run the numbers for you: win the first game of the match with a double zero, and you're halfway home to 500 just through bonus points. But dominoes isn't like a quick couple hands of poker. A game well-played by all four players can last a couple of hours; but if you have a strong team playing against a weak team, that can bring the game down to about 30 minutes max. It all depends on caliber of play.

Dominoes is a simple game (it's matching numbers, after all), but also a serious game when you're playing at a higher level. You don't need to be a rocket scientist to play…but there is some math. Where those skills come in to play is in tracking the dominoes – like counting cards, in a way. It's about knowing what's in hand: if you're opposing me and playing fives (and you have a lot of them), you're slamming them down on the table in a show of power, forcing my partner to pass. I need to figure out a way to get you to choke on those 5s. We're only talking about +/- 130 configurations of numbers that can be played; so if you're focused, you're tracking it. I like math, so I'm pretty good at it – and people who are good at it can figure out everybody else at the table, all while planning three steps ahead. My goal is to figure out what the guys to my left and my right have, so I don't get jammed up – and keep my opponent's partner passing. And if I have a strong hand, I can play selfishly: I'm gonna make you eat those tiles. 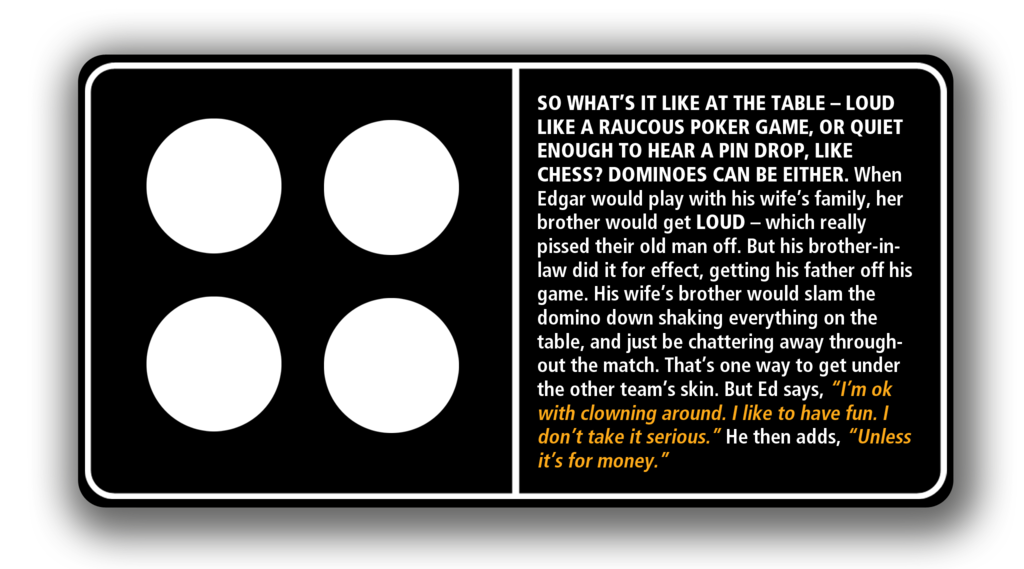 There's more to dominoes than just lining them up and knocking down. Everyone gets together, argues, plays, then laughs when it's done. There are no hard feelings – it's a beautiful thing in what it does. It's not a prejudiced game, anyone can play and feel included; if you don't know how to play, come and sit down – everyone is equal at our table – we'll show you. Anyone who wants to play, come play. We may whip your ass, but you'll still have some fun. And at the end of the day, that's really what it's all about. Regardless of the number of people or the version of the game you’re playing, those who play Dominoes enjoy themselves, and usually, more often, the company. And who knows, you might get lucky and win a hand or two; after all, there is luck in the draw.

When he's not whooping ass in Dominoes, Edgar manages one of the worlds largest cigar inventories in the business. He loves watching foreign chick flicks while enjoying a glass of Pinot by the fire. Though he says there are many, Edgar admits the greatest moment in his life was when he shook hands with his idol, Mr. Michael Buble.

Reading Time: 6 minutes We review the Villiger Exclusivo USA Robusto…based on a Toro made for the 2020 TAA show, this Robusto version is rolled with a spicy core of Nicaraguan and Dominican fillers, exclusively for Famous. Click and get the play-by-play on this limited production cigar!