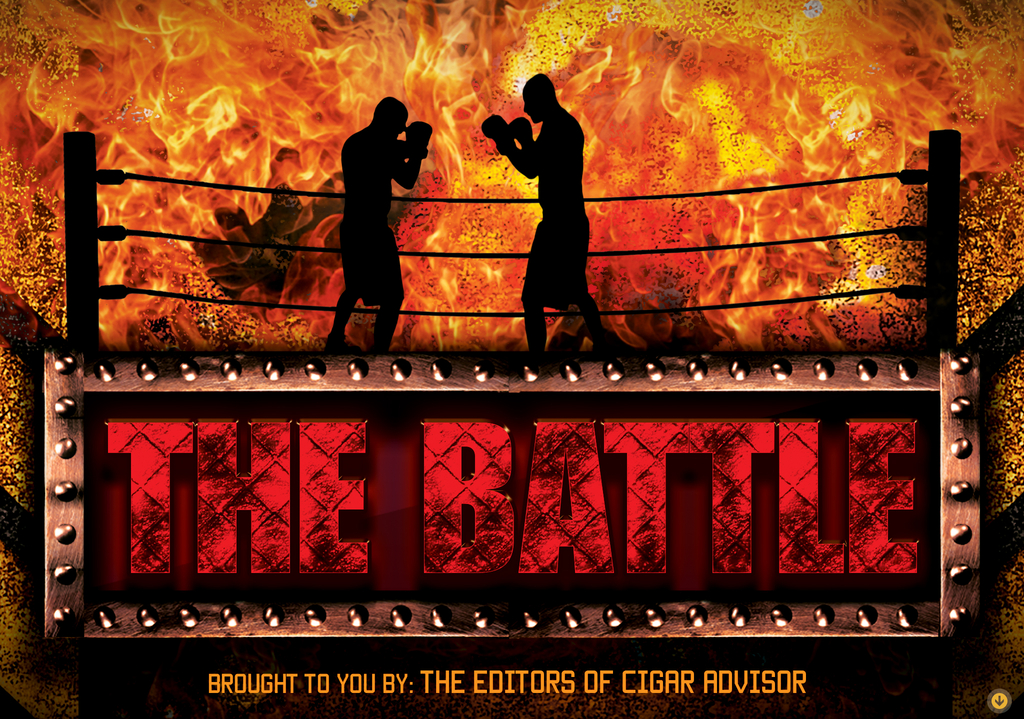 The Battle of the Cigar Wrapper Leaves

If you’ve been swiping through Cigar Advisor looking for those “ratings” screens full of inflated numbers, slanted cigar reviews and stupid phrases like “pleasant subset” or “humble notes”- you’re out of luck. We don’t do that here. Instead, we give you the facts on each stick and leave the review to readers like you. How did we pick the cigars for The Battle? We just happen to like ’em for one reason or another. As for the descriptions, we’re going off of what flavors the fillers have, what taste the wrappers have, and so on…and a little bit of personal experience too. So we pick a few smokes, lay them out in a particular set of categories and let them fight it out.

For this Battle, we’re telling the tale of the tape by wrapper leaf: Cameroon, Connecticut, Corojo and Sumatra. Four totally different looks, feels, tastes and aromas; but because an honest fighter doesn’t box outside his weight class, we’ve put them into a four of pugilism’s more popular divisions. Now, we’re not going to give you the rope-a-dope and tell you that just because one cigar is in a particular weight class, that it doesn’t have skills – it just means that it’s…different. The same way heavyweights rely on punching power, and lightweights rely on speed. Every one of these smokes can go the distance, so read on – you just might find a new sparring partner in this month’s Battle. Get in the ring!

George Foreman once said Roy Jones, Jr. “hits like a heavyweight and moves like a lightweight.” So it is with Serie G…presented in mostly box-pressed shapes, each cigar is a blend of Nicaraguan Habano longfillers and binders. Medium body puts Serie G in our Middleweight class, but be warned – like Jones, it never throws a haymaker.

“Among the best of all time.” It’s said of both Arturo Fuente cigars and Felix Trinidad, one of the best Puerto Rican fighters in history. Fuente are handmade in the time-honored family tradition, and have become legend for their Dominican tobaccos – which offer a quick jab sequence as tight an in-your-face as Tito’s.

Marvelous Marvin Hagler had the highest KO % of all middleweight champions, ever – and one of the best chins in boxing history. Partagas has over 150 years of tradition originating in their native Cuba – and a rock-solid blend of Dominican Cuban-seed & Mexican fillers, making it an amazingly consistent cigar. Neither is to be taken lightly.

It’s the Julio Cesar Chavez of this group – known for outstanding punching power and the relentless stalking of his opponents. Champagne is a flurry of complex flavors and smoke that ends nice and smooth…like a picture-perfect right hook.

Ray “Boom Boom” Mancini was a champ with a whirlwind punching style. Avo Classic cigars have that same one-two punch of curing and aging to provide a consistent, mild to medium-bodied Dominican filler smoke that burns clean through all 15 rounds.

Like Floyd Mayweather Jr. in his lightweight days: a world title holder thanks to the jab and a solid right. Blended with Dominican fillers, a set-up jab of Mexican binders and U.S. Connecticut shade wrapper, Macanudo Café is a true contender as well. And as Mayweather is to boxing, you don’t have a conversation about cigars without Macanudo.

The Edge is the Larry Holmes of Corojo…one of the greatest heavyweights of all time; it’s a whole new dimension in full-bodied cigars. And the Edge, just like the Easton Assassin’s left jab, has one of the most potent weapons in the cigar world: potent all-Ligero long-fillers.

Camacho Corojo cigars are fully-aged cigars with a distinctive ‘Havana-like’ flavor – so we can best compare them to heavyweight Joe Louis. Louis had a reputation as an honest, hardworking fighter; and Camacho is an honest, hardworking cigar made from genuine, first-generation Cuban seed (’97 vintage) Corojo leaf grown in Honduras. It’s a robust, yet smooth experience…just like a Joe Louis fight.

The first all box-pressed selection from Alec Bradley, and their most muscular to-date – this cigar is Smokin’ Joe Frazier. Made in Honduras, the blend’s Honduran and Nicaraguan longfillers bob and weave the palate. Prensado is as potent a smoke as Frazier’s left hook, his knockout weapon of choice; and both have been Undisputed World Heavyweight Champions.

Just like Sugar Ray Leonard, Romeo y Julieta 1875 is a name known in every house. They’re also both known for being smooth, with excellent balance – and finishing with a left hook. In Sugar Ray’s case, it got him Olympic boxing gold; in RyJ’s, it’s the cedar-aged Dominican longfiller tobacco that will leave you with a standing 8-count.

If you were to sum up Manny Pacquiao in one word – it’s “aggressive.” Same with Serie RF cigars…robust, power-packed smokes with a full-bodied, no-nonsense blend of Nicaraguan Ligero and Dominican Olor. Just like stepping into the ring with Pacquiao, it’s only for the more experienced who can go the distance.

Acid Kuba Kuba – the “Golden Boy” of ACID cigars, and still the best-selling in their ‘blue label’ series. Both have a relaxed style, and among the most flavorful, too: De La Hoya being chosen a perennial “Fighter of the Year,” and Kuba Kuba the choice of legions of fans in and out of the Battle ring.

Reading Time: 4 minutes With spring just around the corner, now is the time to start stocking up cigars for the coming warmer weather. Here are six shiny newcomers that are worth your time – plus our coup de grace, two epic Illusione cigars. View our list now…