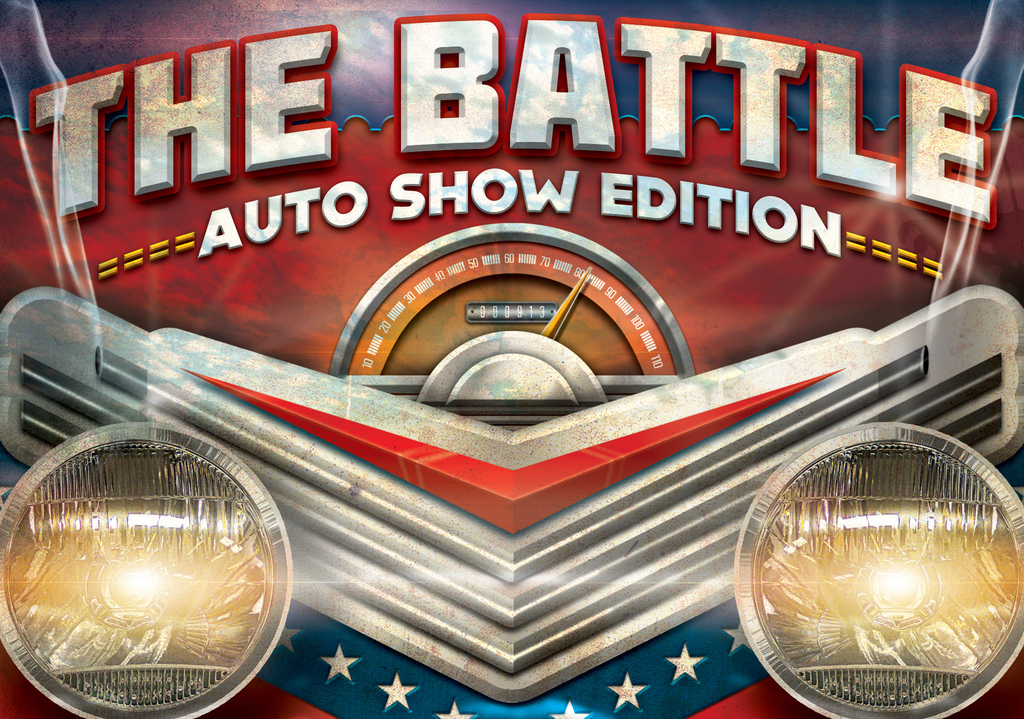 Picking a winner among them isn’t easy, but then again, there’s not a loser in the bunch.

Sum up the feel of an EP Carrillo New Wave cigar in your hand, and you're apt to use terms like smooth, smart and bringing-of-joy. We liken it to slipping behind the wheel of a Boxster: both deliver a perfectly-balanced experience of sweet, creamy and just enough spice around the edges to keep you on your toes. Thanks to a variable intake, putting a flat foot on the Porsche's 3.4-liter flat-six gives the right amount of low-end torque and a smooth power delivery, just like a deep puff on the Carrillo's Nicaraguan/Dominican blend. Zero-to-60 in 4.8 seconds sounds like a cautious estimate of the Porsche Boxster's capabilities; as with the Ecuadorian Connecticut wrapper, underestimate this one at your own risk. In this category, a true performer…without the price tag.

Miami – the home of Placeres Reserva – has always been known for having an added flash-bang of excitement. The Marevas is a medium to full-bodied ride that you'll have a hard time getting out of your head, just as fun as being pinned in the seats of the 530 hp, twin-turbocharged SL63 on a long, open highway. Both are exciting as all hell: the smoke consists of rich Honduran & Nicaraguan longfillers, Costa Rican binder, and a dark Habano wrapper – which mirrors how the AMG has been described: “part muscle car, part DTM racer, part atomic reaction.” Box-pressed, the Placeres Reserva takes off with a bang and runs you to the redline at each stop in the gearbox, almost in a “Learjet for the road” kind of way that you would expect from a Benz that delivers a 3.9-second 0-to-60 mph run. Lighting up either one is likely to please even the most discriminating of palates.

The first thing we thought of when we thought 601 Green was “power.” Raw, pure, cue-the-apocalypse-music power. Which, naturally, screamed “'Vette.” Rounding out the Coronas is the 601 Green…power is a given here; but much like performance cars in general, the big takeaway is the “experience.” Neither is for the faint-of-heart – lighting the Green and popping the Chevy's clutch at about 4,000 rpm both tell you right away that “hang on” is the best advice. You knew this already, though, right? Raw power and speed aren’t new for modern Corvettes, just like 601s aren't known for being timid; and the Green is a balls-deep, full-bodied blend of aged Nicaraguan longfiller tobaccos. The added juice in this smoke comes from the Nicaraguan Habano Oscuro wrapper leaf, making this puro the strongest of all the 601 selections by far. They're both quick, they're both outright fast…if you crave bold taste and aroma, your ride has arrived. 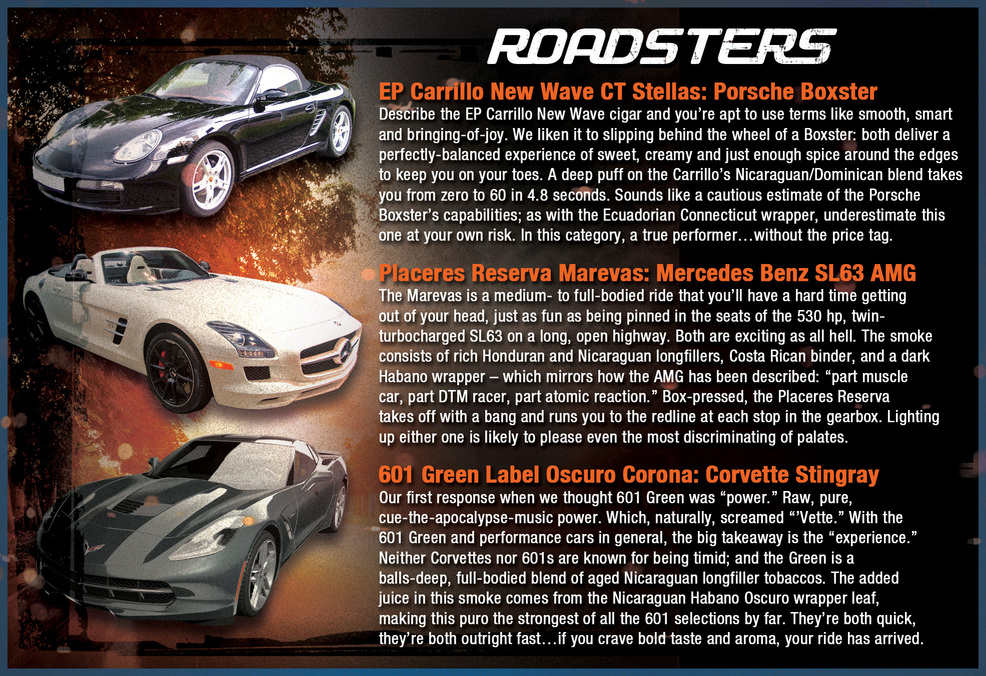 Pairing the Cusano and the Chrysler was easy: what's inside is what counts. Both are pretty classy, and feature rich materials …where the 300’s cabin is loaded with luxuries, the 59 Cameroon filler includes a Dominican wrapper leaf. And under the hood, the cigar is medium-full in body – just like the robust V-8s you know the 300 for. But the calling card to both the smoke and the car are what's on the outside; the Cusano's toothy and dark brown Cameroon wrapper leaf is the star, revealing a balance between spice and aroma that rivals the Chrysler's unique styling and powerful command of the road. This pair is large and in charge…strong & sweet.

Audi’s flagship A8 and the Perdomo Patriarch spoke to us in the same way, as both feature some of the materials and craftsmanship that these manufacturers must reserve for the top tier. Patriarch, Perdomo's homage to his father/mentor/hero, is flush in old-world style – shares the A8's class and composure, making anyone who experiences it feel comfortable. The cigar is traditionally made in Sr.'s favorite blends, showcasing the robust leaf coming out of the Esteli, Condega, and Jalapa valleys. Power is plentiful, as the Audi's turbo V8 and Patriarch's Nicaraguan core both deliver horsepower that can go toe to toe with anything you put up against it.

“Distinct” is the name of the game when it comes to pairing our boy Nimish with the Cadillac XTS. When you're in a Caddy, you know you're in a Caddy. When you're lighting up a Thunder, there's also no mistaking it. Each is a distinct experience. Get behind the wheel of the XTS and your cup runneth over with luxury features at your fingertips to enhance your ride. Nimish does the same with Thunder, combining a hearty Nicaraguan, Honduran and Costa Rican blend in its core that roars with a full-bodied rumble as throaty as the XTS's 3.6L twin-turbo V6. Thunder's Ecuadorian Habano wrapper completes the package the same way the car's giant chrome grill shouts Cadillac. Call this the “modern interpretation of a classic,” because it sure ain't your pappy's land yacht – it is distinctly, uniquely, unmistakably Nimish. 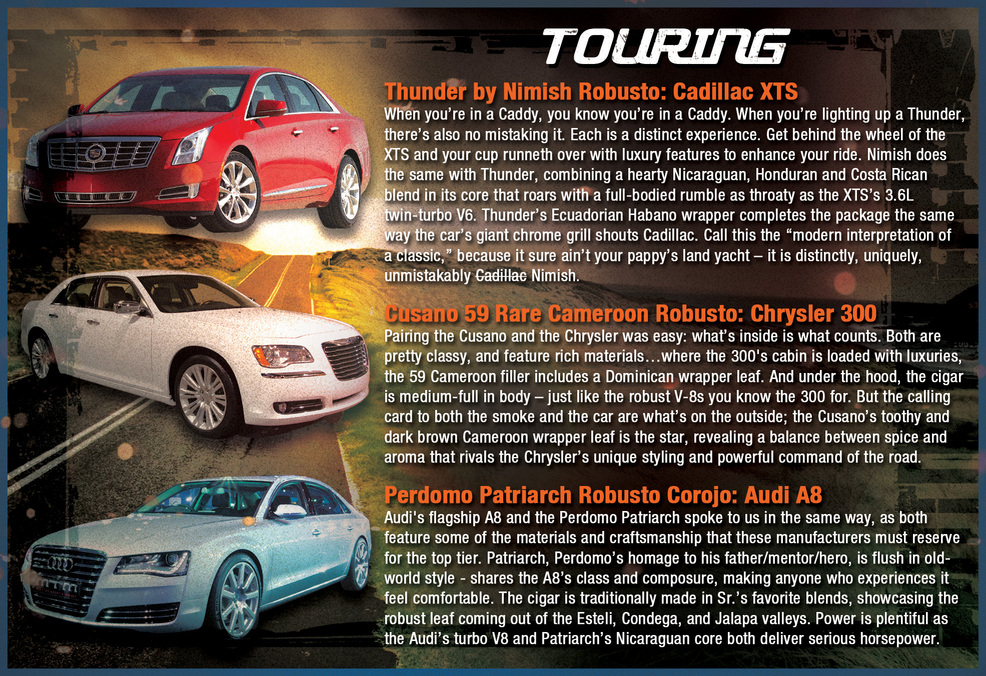 H. Upmann is as versatile as BMW's X5 SUV, exuding a workhorse-chic that allows for each to feel right at home in any situation. Whether it's enjoying a night on the town or staying practical in work mode, both the X5 and the Upmann are practical choices – and easy on the eyes. The Sun Grown wrapper is grown in Ecuador, renowned for producing some of the sweetest wrapper leaf on the planet; that shared workhorse ethic comes through in the broadleaf binder. Add in the Nicaraguan/Honduran fillers and you get a cigar with a complexity and rush that rivals the BMW’s turbocharged eight-cylinder engine combined with your foot on the gas and that appointment you were supposed to be at 15 minutes ago.

What struck us about the Range Rover was it's tradition of hand-finishing and craftsmanship – sounds like the cigar-making process, no? The original SUV seemed like a natural pair with the cigar that takes its name from the place that Cuban tobacco calls home…Pinar Del Rio. The 1878 is a handmade treat – sturdy and rugged, it's a full-bodied off-road ride thanks to its Dominican Corojo, Habano and Criollo ’98 tobacco blend rolled in dark Brazilian Arapiraca. If you're leaving the safety of paved roads, you do so in something you can trust – like the Range Rover – to stay balanced on the road less-traveled. So it goes with the 1878, being well-packed and offering solid consistency and clean burn. Maybe the PDR is your pick of the show – after all, smoking one of these is, like riding tall in the Rover, more of an event.

The High Mobility Multi-purpose Wheeled Vehicle (or HMMWV, aka “Hummer”) has been the mainstay truck of the U.S. military since 1985. It's a horse: durable, mobile and reliable, due in no small part to the Hummer's unique geometry. Santos De Miami Haven cigars are unique in their geometry as well, being box-pressed puros made in the DR. The Haven's full-body blend of Dominican Cuban-seed longfillers, Criollo ’98 binder and Havana Corojo wrapper gives it as much muscle as the Hummer's 6.5-litre diesel engine. System developers at American General have continually found new users and new missions for the go-anywhere/do-anything HMMWV – so, like its kickass cousin, maybe the Santos De Miami will find you next. 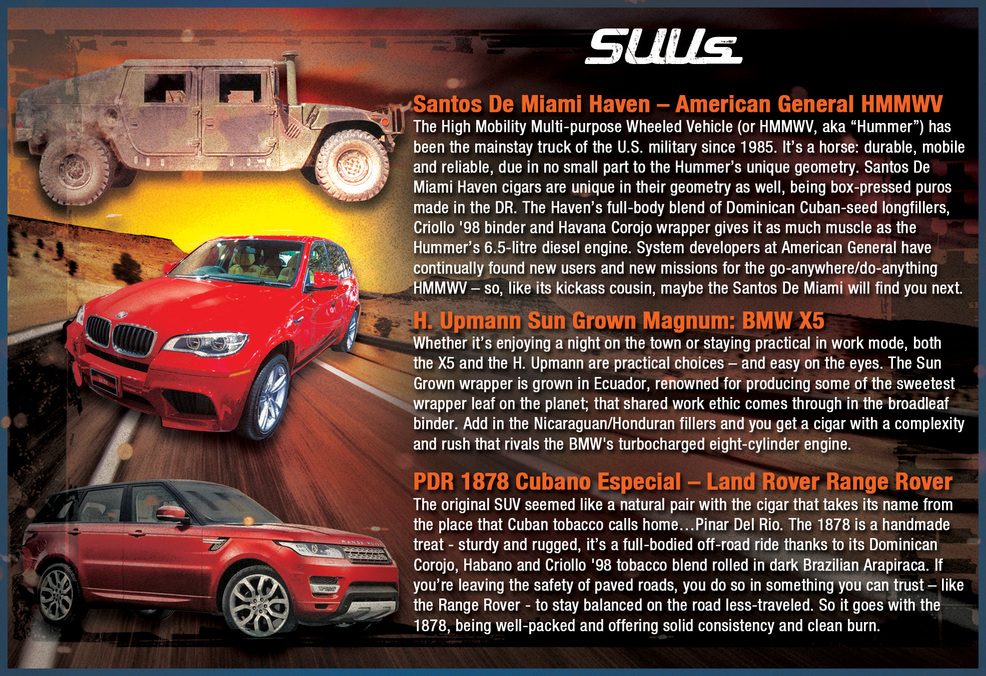 You've known Romeo y Julieta for a long time, probably as long as you've been around F-150s. But you really know it when something special comes along…enter the new House of Capulet, a sharper, sleeker addition to the RyJ imprint; and from Ford, a true successor to the F-150 SVT Lightning, a special F-150 named the Tremor. Ford has juiced their classic (specs to be announced later this year) by launching a performance truck flush with aftermarket features; Romeo has done us a solid, stepping up their game with a blend of Honduran and Nicaraguan fillers, Nicaraguan binder, and Ecuadorian Connecticut wrapper. Each is a best-in-class contender for doing a smoky burnout with your pals.

Go big or go home is what we say in regards to the Warlock, which we've paired with International's CXT – the BBMF (and world's largest) of all production pickups. Size, payload, wheels, hauling capacity – everything about the CXT is massive. It's essentially a semi stuffed into a pickup, with room to hang a set of truck nuts of which Thor approves. So how do you compare that to a cigar? Easy…Warlock's full bodied flavor comes from the select Ecuadorian Cubano wrapper, a Nicaraguan binder teeming with strength and Nicaraguan/Dominican fillers that just might part your hair. It's hefty in the hand, produces tons of thick smoke and produces a strong ash. These are big, bold cigars: light it up and expect Warlock to conjure a spell of “kickass,” roll d20 for damage.

One review we've read said, “The bold flavors and punch may surprise some smokers who don't associate tobacco from the Dominican Republic with that kind of power.” So it seems, then, that the Quattro is quite the bundle of energy. Perhaps Rafael Nodal has channeled his inner Monster Jam, and rolled a cigar to give you the experience of taking Grave Digger a spin. Powered by a methane-fueled, supercharged 540-ci V8, the Digger takes a slight advantage in the strength department over this Aging Room blend…but it's all relative, of course. Whereas the truck generates 1400+hp and rips a 0-30mph test in 1.5 seconds (which is quicker than a Nissan GT-R and gives a Camaro a run for its money in the torque department), this F-55 – made with Dominican Havano longfillers and binders – treats your weaker taste buds like those old and busted '78 Dodge Monacos in Grave Digger's path. Box-pressed in a Sumatra wrapper, this one is robust…consider a helmet.