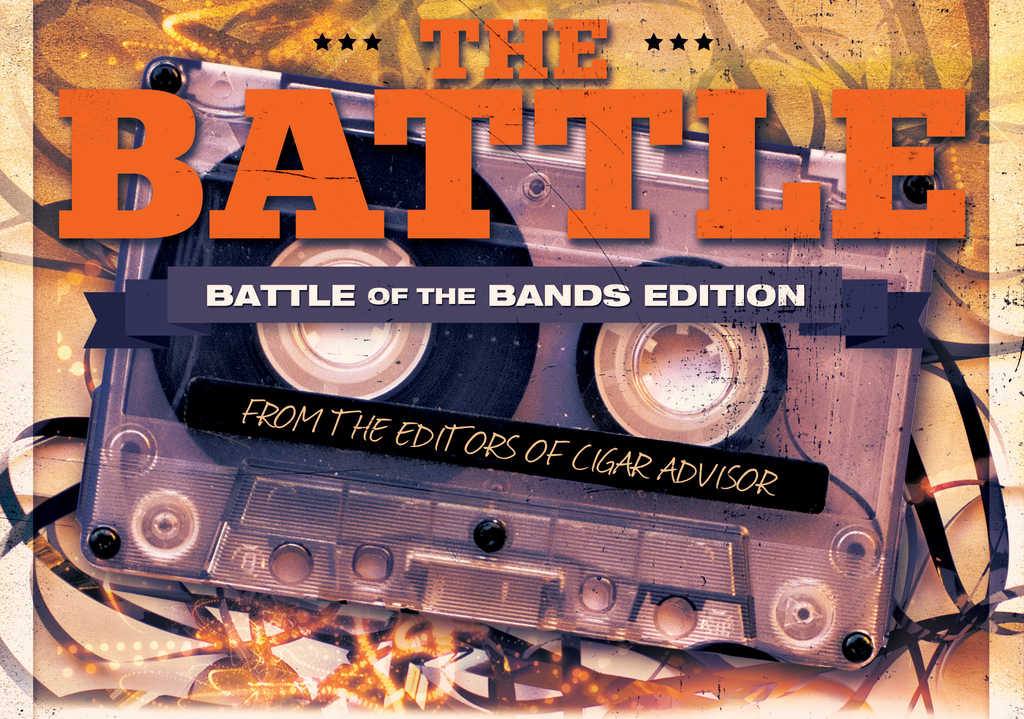 The Battle: Top Cigar Wrappers – Battle of the Bands Edition

It’s a Battle of the Bands: Tastiest Cigar Wrappers!

“Aaaaaand we’re BACK to the Battle!” But when we say it in our crackpot deejay voice, you know it’s about to get real in here. At Cigar Advisor, we do NOT make up some stupidly arbitrary number between 75 and 100 and pass it off as a “rating” – we let the sticks do the talkin’. We’re not going to waste your time and flood you with that flowery review crap here, either. That’s just silly. Instead, we give you the facts on each stick and leave the reviews up to readers who sample the Battle cigars – real people, like you. Maybe you’ve been wondering, how did we pick the cigars for this Battle? Type of wrapper, mostly – but really, we just happen to like ’em for one reason or another. As for the descriptions, we’re going off of what flavor the fillers have, what taste the wrappers have, and so on…plus a little bit of personal experience. So we present to you another set of smokes, laid out in a particular set of categories, ready to Battle.

Get ready to rawk! We’ve broken out each category by cigar wrapper type: Brazilian, Broadleaf, Habano and Sun-Grown. Four totally different looks, feels, tastes and aromas; so to fight it out, we’ve concocted a Battle of the Bands – matching each smoke with some of Rock’s most legendary bands. We’ve got most of the bases covered: some sounds of the South, heavy British metal, top-shelf prog guys and flat-out shredders. Don’t get us wrong, we’re not claiming one wrapper tastes better than another – but just like our tastes in music, “different strokes for different folks.” Each rock genre in the Battle is a greatest-hits tour that will get any cigar enthusiast on his or her feet…and we won’t sure as hell won’t make you sit through a drum solo.

Read on as we pump up the volume in this month’s Battle!

CAO Brazilia are blended with Nicaraguan fillers & binders so rich tasting and smooth-smoking, it’s like Duane Allman and Dickie Betts cuttin’ heads at Fillmore East. The cigar wrapper is an oily, dark-brown Brazilian leaf harvested from a rare, outstanding crop, and carefully aged – bringing its flavor to a peak as vibrant as any Allman Brothers jam on record.

Cusano 18 (an Advisor favorite, but don’t let that sway you) cigars feature a rare 1985 Dominican Oro/Seco wrapper leaf filler, Brazilian Mata Fina & Dominican Piloto – tres hombres of filler that yield as much flavor as Billy Gibbons’ beard has rock. Medium body, just like ZZ Top’s dusty groove. This is one cigar to get El Loco with.

The Nicaraguan-Honduran-Mexican-Columbian-Brazilian blend inside 7-20-4 cigars are a veritable 5-man band of southern-fried rock greatness. After curing & aging, the cigars are aged again in Spanish cedar boxes for 120 days to mellow. Medium-plus body, but smooth…like Skynyrd’s 3-guitar attack. One taste, you’ll make it your new Saturday Night Special.

Dark & medium-bodied, it’s Van Halen in a box…Everybody Wants Some. Avos are wrapped in a specially-grown, U.S. Connecticut Maduro broadleaf. Aged and blended with five unique Dominican-grown leaves, Avo Maduro is smooth and well-balanced with a long finish – like Eddie on Diver Down’s “Cathedral.” Like Roth-era VH, it’s the benchmark of the Avo collection and maybe one of the most memorable, too.

[Ed. Note: Avo Maduro cigars are no longer in stock at Famous Smoke Shop; click the image to view other Avo cigar options.]

Pete Johnson & Pepin Garcia must have been blending with Aerosmith playing in the background – because La Riqueza ain’t the same old song & dance. Rich-tasting, thanks to a robust Nicaraguan core and that Broadleaf cigar wrapper – shady as Joe Perry’s slide blues. Expect an earthy, medium-bodied smoke train that keeps-a-rollin’ into a complex, full-flavored power chord. Pass over this cigar? Dream On.

For those about to smoke, we salute you. Oliva Serie O Maduro brings the thunder from down under in a hearty, well-aged puro. Like AC/DC, each cigar is a live wire blend of Nicaraguan Habano long-fillers and binders, selected to complement the robust flavor and sweet aroma of this specially-aged cigar wrapper. The smoke? Rich as an Angus Young riff, earthy as Bon Scott’s voice, and medium-to-full in body – like TNT with your speakers cranked n’ spanked at “11”. It’s dynamite.

The Who – one-third of the holy trinity of British Rock – are what Cru Royale cigars are to the Macanudo brand: medium-bodied, but they bring flavor as explosive as a Keith Moon drum solo. Crafted by the legendary Benji Menendez, each cigar has a core of Nicaraguan & Dominican Viso longfiller with Brazilian Mata Fina. What’s cool is that, like the Who bringing the synthesizer to a righteous place in rock, Benji has brought a proprietary Dominican La Vega Especiale binder to the party – calling for a rich, Townshend-windmill of complex flavors that will have you getting in tune in no time.

No battle of the bands is complete until we get a flyover from the mighty Zeppelin. Romeo y Julieta Habana Reserve – the most full-bodied RyJ ever – brings an element of Jimmy Page-smooth with a rich, flavorful boom, the likes of which can be compared to Bonham’s seismic roar of percussion. Using the most choice Nicaraguan & Honduran tobaccos, Romeo brings a robust cigar full of earth & spice to the Battle, which ends on a long finish with a sweet and spicy aroma that will take you to Heaven – no stairway needed…

Make way for the workingman’s band: Black Sabbath. Gran Habano Habano #3 embraces Sabbath’s slow-and-heavy, shredding taste buds Tony Iommi-style through a medium-bodied blend of Costa Rican, Nicaraguan and Mexican longfillers with a Nicaraguan binder and an Iron Man-solid Nicaraguan Habano seed wrapper. The smoke is rich, smooth and well-balanced. We might recommend this smoke for the end-of-the-day, a good chance to space out with the Oz-man in your head.

A rock critic described Pink Floyd as a band whose music has “a fine textural and conceptual richness that not only invites, but demands involvement.” So it is with Alec Bradley’s American Sun Grown: offering more depth, body, aroma and spice than its cousins, this full-flavored blend of Esteli & Condega fillers and Jalapa binder will speak to your palate with the spiciness of David Gilmour’s guitar solo in Comfortably Numb. Come to think of it, the American Sun Grown would pair nice with an hour’s worth of Floyd, too…

Medium bodied, rich and complex – that pretty much covers it when we’re talking about Yes, or this Sun Grown selection – one of Upmann’s most full-flavored smoke to-date. This cigar is highlighted by its unique sun grown cigar wrapper, a leaf that’s cultivated in Ecuador for bigger helping of sweet flavors. Covering a robust blend of Honduran and Nicaraguan tobaccos, you’ll taste a rock symphony of tangy citrus, sweet spices and pepper in a blast of complexity. This smoke is bold by H. Upmann’s standards, but like 9 minutes of Roundabout: perfectly-balanced.

Like a cosmic blast out of the Great White North, Rush bring an in-yo’-face kind of elegant noise. So does Rocky’s 15th: full body and plenty of strength, it’s got more horsepower than a Red Barchetta. Thanks to its blend of Nicaraguan longfillers (from a special farm in Esteli) and Jalapa binder, Rocky calls it “a Decade on steroids,” and we don’t disagree; fire one up, and it’ll be making some permanent waves across your palate. Look for a richness, complexity and spice that will no doubt bring the 15th Anniversary closer to the heart.