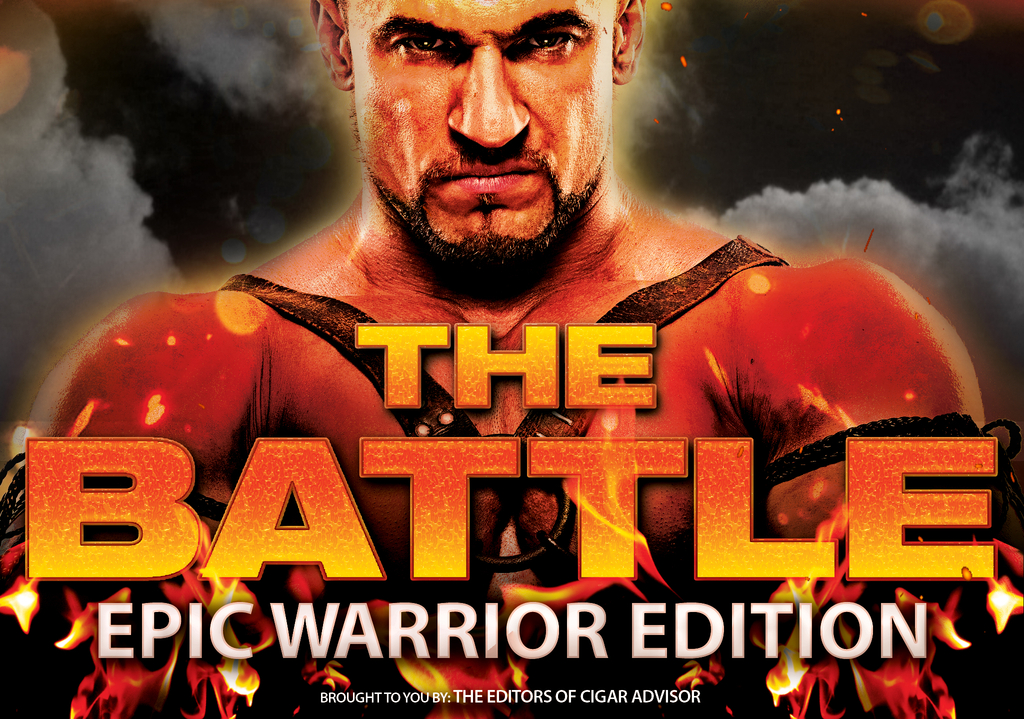 Welcome to the Battle! Still looking for those “ratings” pages full of inflated numbers, slanted cigar reviews and stupid phrases like “pleasant subset” or “humble notes”? Nope, nope, nope. Ain’t happening – we’re just here to give you the facts on each stick and leave the ratings up to the readers like you. You may now be wondering how we chose these particular cigars to duke it out…Simple: because we can, that’s why. As for the descriptions you see, those are based off of the flavor, body and strength the fillers and wrappers have, and so on…and a little bit of personal experience, too. So we pick the smokes, lay them out by category and let them fight it out – and if you like what you see, we’ve made it easy to buy and add that contender to your humidor.

This cigar battle is a test of strength: Mild, Mild-Medium, Medium-Full and Full. Four levels of intensity here – and to experience each, we think, is like doing battle with different warriors throughout history. Don’t be fooled, however – a knight of King Arthur’s Court isn’t any less savage than a full-blown Viking Berserker – he’s just a little more…refined. So it is with cigars in each of our rounds. Are you prepared to feel the honed steel of the honorable Samurai, or the viciousness of ancient Rome’s dusty Gladiators? You’ll see that, like our warriors, strength and intensity come in many forms and flavors – and each of them, unique.

Just as the Gran Habano is a delicate balance of Nicaraguan longfillers and aromatic CT wrapper, the Black Prince was a balance of ruthlessness and chivalry – while he treated the captured King John of France very well, he thought nothing of liquidating the rank and file of John’s defeated army.

Baccarat cigars are a sort of William Marshal, who made his bones by kicking armored ass in Middle Ages tournaments – proficient with every weapon in the arsenal. They have the mojo of an all-Honduran-grown core, but with a sweet cap found on traditional Cubans. Both are a champion of the people.

His nickname means ‘the master’ – and Rodrigo took it upon himself to attack whomever he pleased, whether the King of Spain liked it or not. So it is with CAO Gold; it stands out independently from the rest of the CAO sticks by virtue of milder flavor and mellower aroma.

Masamune and Oliva both strike fear into their opponents – as they both could be unpredictable when challenged. The Oliva is “Connecticut mellow” until it has the opportunity to strike with its Nicaraguan tobacco filler, unleashing a dash of pepper…just as Masamune did when waging war.

There was no samurai stronger or more cunning that Oda Nobunaga, who was responsible for introducing firearms to unleash hell on his opponents. Nick Perdomo does the same with the Lot 23, unloading a barrel-full of aged Corojo and Criollo tobaccos in one hearty puff of smoke.

Hideyoshi & Rocky are both innovators: the samurai constructed the massive Osaka Castle, one of Japan’s most recognizable landmarks; Rocky has created a rich, aged Nicaraguan & Honduran Ligero longfiller cigar wrapped in Ecuadorian CT that stands up to history.

Flamma enjoyed a fight, just as the Black Market does today – freed from his shackles four times, Flamma chose instead to stay and battle. The AB’s Honduran Jamastran and Panamanian longfillers, Sumatra binder, and semi-sweet cured Jalapa wrapper just may be a blend you’ll fight to the death over.

The Spartacus of the bunch, Liga has thrown the cigar world into a full-blown revolt with its unique Otapan-Mata Fina-T52 CT Habano blend. Just as Spartacus defeated whole legions sent to kill him, the Undercrown has a complex fighting style that has rolled over its opponents.

Just as we’ve all been longtime friends with RyJ, Spiculus was tight with the Emperor Nero. The Reserva’s Nicaraguan binders and Honduran-Nicaraguan fuller blend are good friends to have by your side…if you dare to step into the arena.

Both can be characterized as always on the move and always unpredictable for his enemies…Camacho rolled Maduro tobaccos into the wrapper, filler, and binder for a full-bodied experience that will inspire you to raid and plunder villages, just as Ragnar Lodbrok used his ships to devastate France.

This version of JdN gets as full-Berserker as Ivar “the Boneless” – the embodiment of Nicaraguan power, this mature-leaf puro builds in strength just as the Viking a warrior who fought in an uncontrollable state of fury. This is a cigar that just may make you want to tear your shirt off and run around with an axe.

Leif Eriksson just didn’t give a shit: he discovered America, and said “meh – looks boring.” This 601 Nicaraguan puro of Ligero in a Habano wrapper does much the same to your palate, with similar disregard for your safety. Like Leif, you’ll want to wear a helmet.

I was struck with awe at the choice for Baccarat… because this is the cigar that got my wife and I started in this leaf love afair. A special thanks to Barry for getting us started.

How to Ash Your Cigar