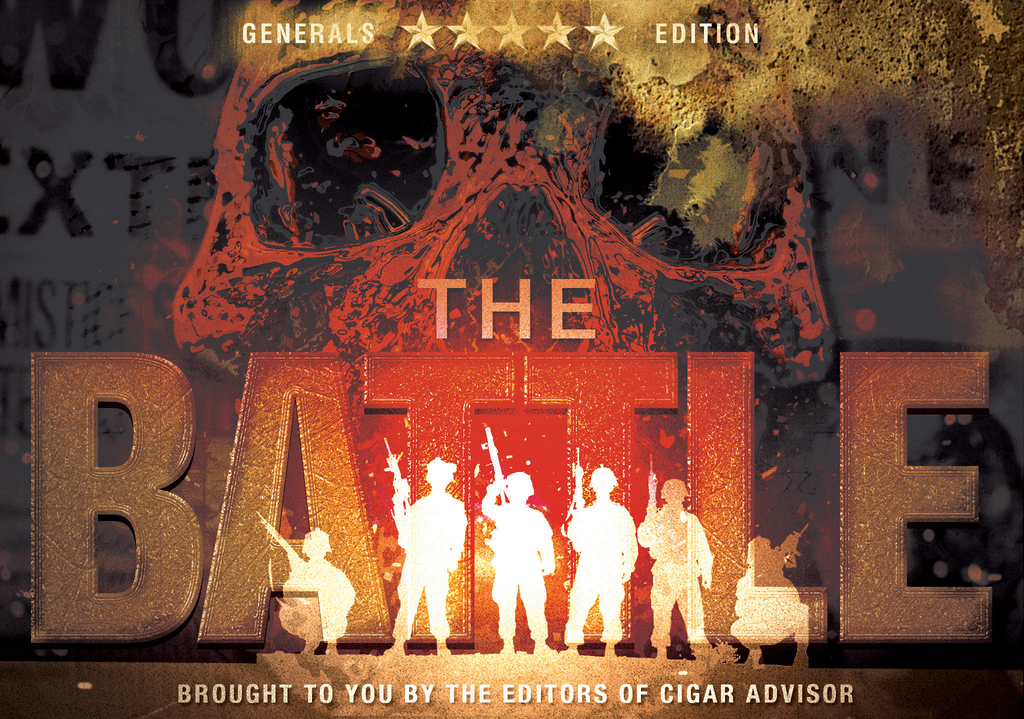 The Battle of the Puro Cigars

Welcome to the Battle! This is how we do things at Cigar Advisor: instead of us making up some stupidly arbitrary number between 75 and 100 and passing it off as a “rating” – we let the sticks do the talkin’. While we swore a long time ago that we’d never put “humble notes of Madagascar vanilla” in print, it’s only to tell you that you’re not going to get that kind of flowery review crap here in the Battle, either. That’s just silly. Instead, we give you the facts on each stick and leave the reviews up to readers who sample the Battle cigars – real people, like you. Maybe you’re asking, how did we pick these puro cigars for the Battle? Eh, we just happen to like ’em for one reason or another. As for the descriptions, we’re going off of what flavor the fillers have, what taste the wrappers have, and so on…and a little bit of personal experience, too. So we picked another set of smokes, laid them out in a particular set of categories and are ready to let them fight it out again.

This month, we’re marching into the Battle with our war face on and attacking the puros: Honduran, Dominican and Nicaraguan. For our fourth category, something different – each one there is a veritable NATO of tobacco, made of leaf from many nations (as opposed to from just one country). Four totally different looks, feels, tastes and aromas; so to fight it out, we’ve matched each category with U.S. Generals from throughout this country’s history. Now, we’re not saying that the top brass in the Civil War were any less fierce combatants than the guys who stormed Normandy – that would be downright dishonest. Instead, each Battle class is a 4-star matchup of warfighters with a special set of skills that are prepared to wage combat for the hearts and minds of cigar enthusiasts everywhere.

Read on as we rally the troops in this month’s Battle. Praise the Lord and pass the ammunition…

If there’s one thing the Punch Gran Puro has in common with General Francis Marion, it’s their shared reputation for a full-bodied fight. Marion earned the nickname “Swamp Fox” due to his successful guerilla campaign against British troops. Punch offers a blend of vintage, spicy, all Honduran-grown tobaccos that can, and will, sneak up on you under the cover of a dark, oily wrapper. Seasoned cigar smokers, it’s insurgent warfare at its finest.

Don Tomas Sun Grown is this Battle’s George Washington: selected by the Continental Congress to serve as general-in-chief, Washington forced the British surrender in 1781. GW could have been king, but modestly decided that 2 terms as President was enough; Don Tomas’ modest price makes it a wise choice for an affordable, every day cigar. The tobaccos used in these puros are grown exclusively in Honduras’s Jamastran Valley, fitted in a Honduran sun-grown wrapper. The result is a crisp, medium to full-bodied smoke full of courage and bravery that would make the Father of our nation proud.

Sancho Panza Extra Fuerte and General Nathanael Greene have both stirred some controversy…Greene made a name for himself by covering Washington’s ass at the Battle of Brandywine (and replaced traitor Benedict Arnold), which led to his appointment as quartermaster general and a major beef with Congress. The makers of Sancho Panza had just such a situation on their hands when they offered their initial lines of this cigar – the full-bodied, earthy blast was such a hit that it this newer version was introduced, sporting a sun-grown Havana-seed wrapper. It’s box-pressed and super-full, giving you a full-on taste of what Honduran puro cigars can do.

Historians consider General Thomas “Stonewall” Jackson to be one of the most gifted tactical commanders in history…and a little, shall we say, “unique.” The same can be said of Cusano Corojo Dominicano, which features patiently-aged Dominican longfiller wrapped in a reddish-hued Corojo leaf. Cusano brings a Stonewall-sized brigade of full-flavored smoke that takes some discipline – Jackson’s most notable quality – to master.

Sometimes a battle isn’t fought with grace, but with brute force. La Aurora Preferido Corojo brings the heavy in deftly-rolled Dominican Corojo, the same way Grant pushed onward through the Confederacy at all costs. Any opponent is in for a full-body fight – whether it came to tangling with a force like the General, or like the smoke. Neither is known for being a genius tactician; but both have a reputation for being bad-ass bold and relentless in an eye-on-the-prize kind of way.

If you can be sure of anything, Ashton Classic knows how to conquer with its Dominican. And if there’s one man who knew scorched earth, General William Tecumseh Sherman was your man. The guy’s got a tank named for him, for God’s sake. Like Sherman’s cold and bloodthirsty March to the Sea, Ashton brings an inferno of specially-aged Dominican leaves surrounded by smooth Connecticut shade wrapper; and in total warfare, both are battle-hardened masters among commanders.

Alec Bradley Nica Puro cigars lay siege to the palate; blending all-Nicaraguan fillers and binders with a Habano wrapper, it’s a force to be reckoned with. Just like General Douglas MacArthur: rockin’ that big bonkin’ pipe and bringing the hurt to the Pacific Theatre, he was the “American Caesar” who said screw all, let’s fight: “In war there is no substitute for victory.”

Old Blood and Guts (yeah, that was his nickname) is probably the poster boy for biggest bad-ass in all of military history. General George Patton’s name is usually spoken along with words like “wild” and “bombastic” – which are also often heard when describing Oliva’s Cain Habano. Patton backed up the bluster with genius and balls, the same way Cain’s rich and full-bodied straight Ligero blend does – and with a pinch of Seco and Viso added for combustibility you will love this Oliva Masterpiece.

Padron – what else can be said, except for it being the Eisenhower of the Nicaraguan cigars? General Ike has his fingerprints all over great moments in modern American warfare, from the D-Day invasion to the cease-fire in Korea. Like Ike, Padron is mild-mannered…but full-flavored when it comes to being the Supreme Commander of the machines of cigar war.

You want to see an underdog in this fight? That’s just one thing General Andrew Jackson – yeah, that one – and K.A. Kendall’s 7-20-4 have in common. Laying waste to a British strike force 50% larger than his in 1815, Jackson was nicknamed “Old Hickory” for being such a tough friggin’ guy. Instead of hickory, 7-20-4 uses Spanish cedar to mellow and age its 5-nation blend for another four months – resulting in a medium-full smoke that, as Jackson, is just as charismatic as it is aggressive.

Montecristo Platinum knows what’s up…to compete in this battle, you must attack with brawn AND brains. General Winfield Scott knew it so well, he literally wrote the goddamned book on being a soldier: the first set of bylaws that set standards for every aspect of a soldier’s life. War to Scott was like a game of chess, using strategy and decisiveness to conquer. This Monte, a medium-bodied 3 nation blend, wraps itself in a flag of Mexican San Andres for more depth and complexity than Scott’s Anaconda Plan that squeezed the life out of the Confederacy.

Carlos Torano Exodus 1959 is the General John Joseph “Black Jack” Pershing of this Battle, the most celebrated American hero of WWI. Pershing hand-crafted a standing army of almost 2 million men, all balls, from scratch; after all, WWI required a new kind of soldier. Just like Jack, the Toranos said it was time for a new kind of cigar – and rolled up this medium-bodied ballistic missile of a smoke, well-packed with leaf from a mix of countries and box-pressed for bonus flavor. No matter how you slice it, it’s an attack hand-forged from the ground up.

Reading Time: < 1 minute The Avo Maduro No.2 30th Anniversary is an affordably-priced maduro with well-rounded flavors of cedar, dark chocolate, spices, and more. Click to see the rest of the review

Who Cares About Your Cigar Ash?