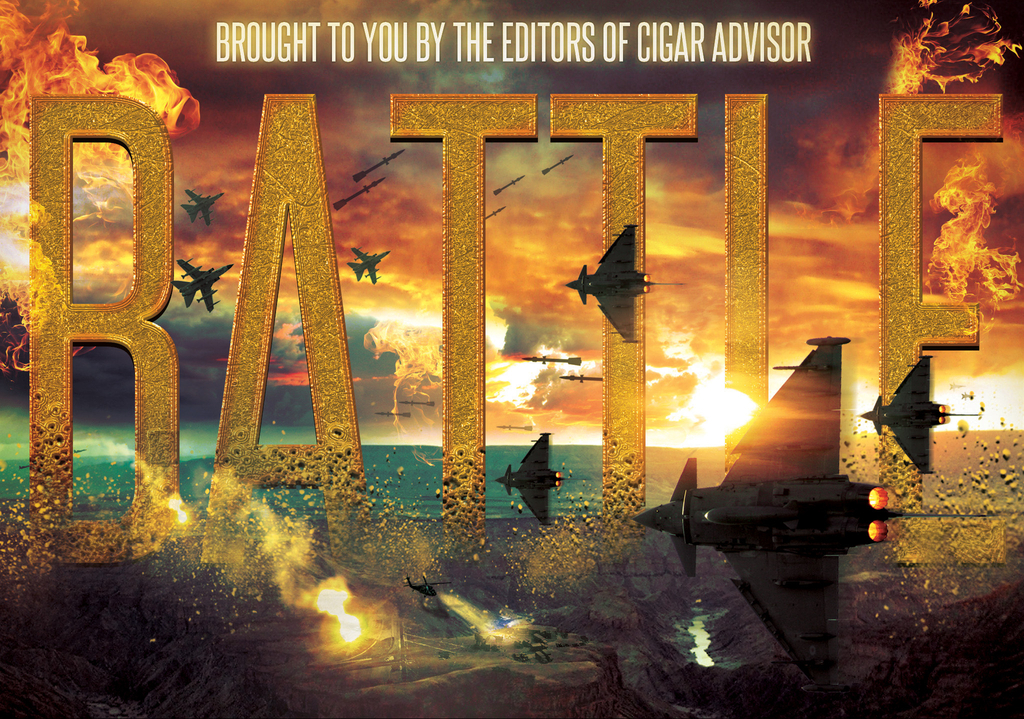 Welcome to another Battle! Since we started, we’ve never found any sense in blowing up ratings and pulling reviews out of thin air – we always believed it best to let the cigars talk the talk. That’s just how we roll. You get the facts on each small cigar, and with that info, give you the chance to sample and review the sticks we’re talking about. Our criteria for choosing these 10 cigars haven’t changed, either – we just happen to like ’em for one reason or another. But for comparison purposes, it’s all about size for this Battle – and we’re going for lean, mean and explosive. As for the descriptions themselves, we’re going off of what flavor and body the fillers have, what qualities the wrappers have, and so on…plus a little bit of personal experience. So we present to you another set of small ring smokes, ready to Battle.

This time out, it’s a showdown among “Weapons of Mass Combustion.” That’s right, things that go boom in the night. Each small cigar has been selected from a particular group of sizes: Corona, Lonsdale, Panatela & Petit Corona…four different looks, feels, tastes and aromas that are on the smaller side of life. But that doesn’t make them any less potent – actually, quite the opposite. And to fight it out, we’ve matched each smoke with firepower in the US Military arsenal. We’ve got most of the bases covered: from the extreme range of Intercontinental ballistic missiles to the long range of US cruise missiles, and from medium range rockets to short range slugs, each class of missile in the Battle is an explosive taste experience for any cigar enthusiast…you will know each by the smoke it leaves behind.

Read on as we load, lock on and fire in this edition of the Battle!

Romeo Habana Reserve Corona (Nat): the fullest-bodied RyJ’s ever, it was only natural to pair this smoke with another workhorse: the Atlas rocket. Operational as an ICBM before taking over duty of hauling stuff into space (like Mariner probes, Gemini & Mercury missions, and John Glenn’s tough-ass self), it could pack a punch with its massive warhead – the same way Habana Reserve drops a flavor bomb of choice Nicaraguan & Honduran leaf.

CLE Corojo Corona (Nat): A medium-full bodied Weapon of Mass Combustion, it just might be the MX missile of our day…CLE Corojo rains taste and flavor by the kiloton, thanks to its Honduran puro construction, that will bring you peace through superior firepower – courtesy of the King of Corojo, Christian Eiroa.

SWAG Quickie (Nat): The “Minuteman” missile got its name from the Revolutionary War’s Minutemen, as well as its quick reaction time: the power of this warhead can be unleashed within minutes of the receipt of the go-ahead. SWAG should get the same designation, as you’ll experience a full-bodied blast within minutes of lighting it up. A Dominican ligero smorgasbord, this SWAG can get the job done in no time flat.

Padron Palmas (Mad): Like the Padrons’ influence on cigars, the AGM-129 represents the cruise missile taken to the next level: stealthy, subsonic, and nuclear-tipped. And like this cruiser, this Padron small cigar has some extra kick in the end thanks to long-aged Cuban seed tobaccos grown entirely in Nicaragua. They also share a unique, square-pressed shape.

Punch London Club (Mad): Blended with Honduran, Nicaraguan and Dominican tobaccos and rolled in a Maduro wrapper, Punch is simple, effective and bold. A heritage weapon, the AIM-9 Sidewinder is the most widely used missile in the West – which is why it’s such an easy match to Punch. Low cost and extremely successful at what they do, both almost can’t miss.

Arturo Fuente Petit Corona (Nat): The AIM-4 Falcon was the first operational “fire-and-forget” guided missile put to use by the Air Force. With a similar sense of nostalgia, this little Fuente heat-seeker might have been one of the first cigars you ever tried; thanks to its medium body and smooth smoke, it’s one to “fire” up that you won’t forget.

E.P. Carrillo Core Line #4 (Mad): Like an AIM-7 Sparrow missile, Ernesto Carrillo has set his radar on your palate and is homing in on your humidor with the #4: constructed with aged Nicaraguan and Dominican Piloto Cubano tobaccos, he’s added a CT Broadleaf Maduro wrapper for tactical advantage. Medium-bodied, the #4 attacks the senses the same way pilots would fire the Sparrow – in a ripple-fire manner for maximum effectiveness.

Rocky Patel Vintage 1992 Petit Corona (Nat): A Sumatra-wrapped bullet, Rocky’s Vintage ’92 sports a core of aged Dominican & Nicaraguan fillers that shreds the competition with flavor faster than a 25mm shell. This small cigar may look small and unassuming, but this cannon-fired cap has the potential to wreak havoc on targets large and small. And that’s how Rocky brings the ammo to conquer your next herf.

CAO LX2 Bam (Nat): Bam? We counter with boom…LX2 stands for Ligero x2, which means be prepared for a full-bodied, full-flavored 40mm grenade of strong, spicy leaf. For this small cigar blend, Dominican and Nicaraguan ligero filler tobaccos are encased in a Honduran binder leaf, rolled in a Nicaraguan wrapper. The result: a very robust smoke.

I have been enjoying Corona’s since the 60’s. and they are my winter go to stoggies. one of my all time favorites is no longer made. (luckly, I still have a few in one of my humidors). talking about Corona’s, I think I will go burn one now. a Padron