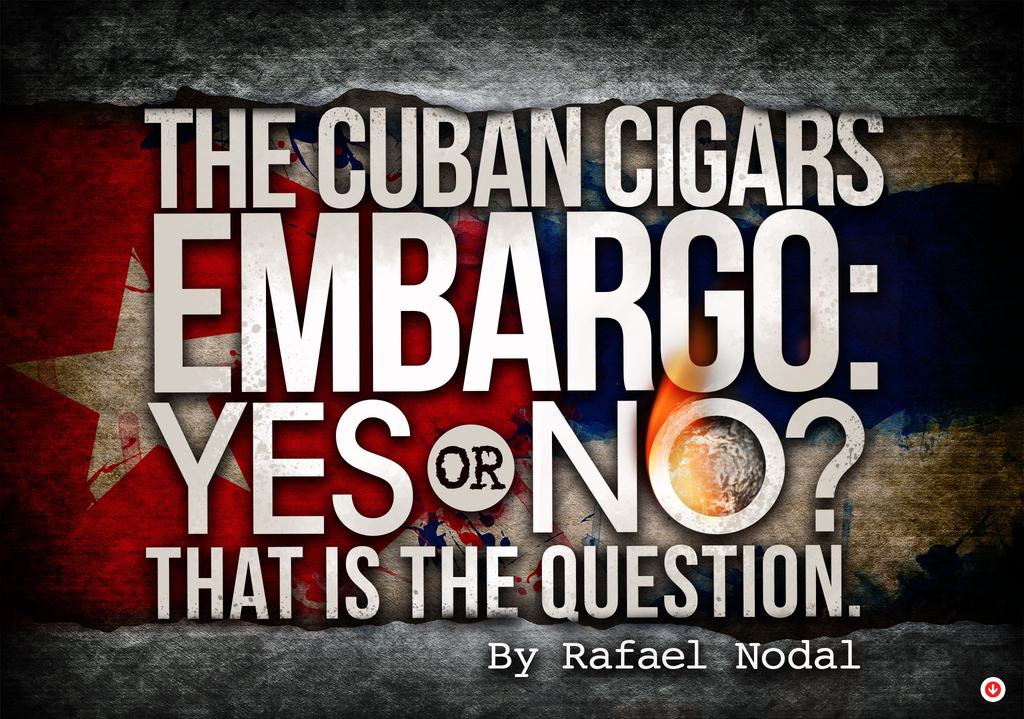 It seems like a very simple question. Do we as Americans want to be restricted by government policy to buy and “legally” enjoy a Cuban cigar? On its face, it has a simple answer. We Americans are tired of the government telling us where to smoke, what to smoke and when to smoke a cigar. However, as in many things in life, it is not as simple as the difference between black and white.

My father taught me that you don’t deal with thieves; you don’t do business with criminals; you don’t help bullies, and you certainly don’t help dictators stay in power to continue terrorizing their people. Those principles have guided my reasoning with regard to the U.S. Cuban Trade Embargo. 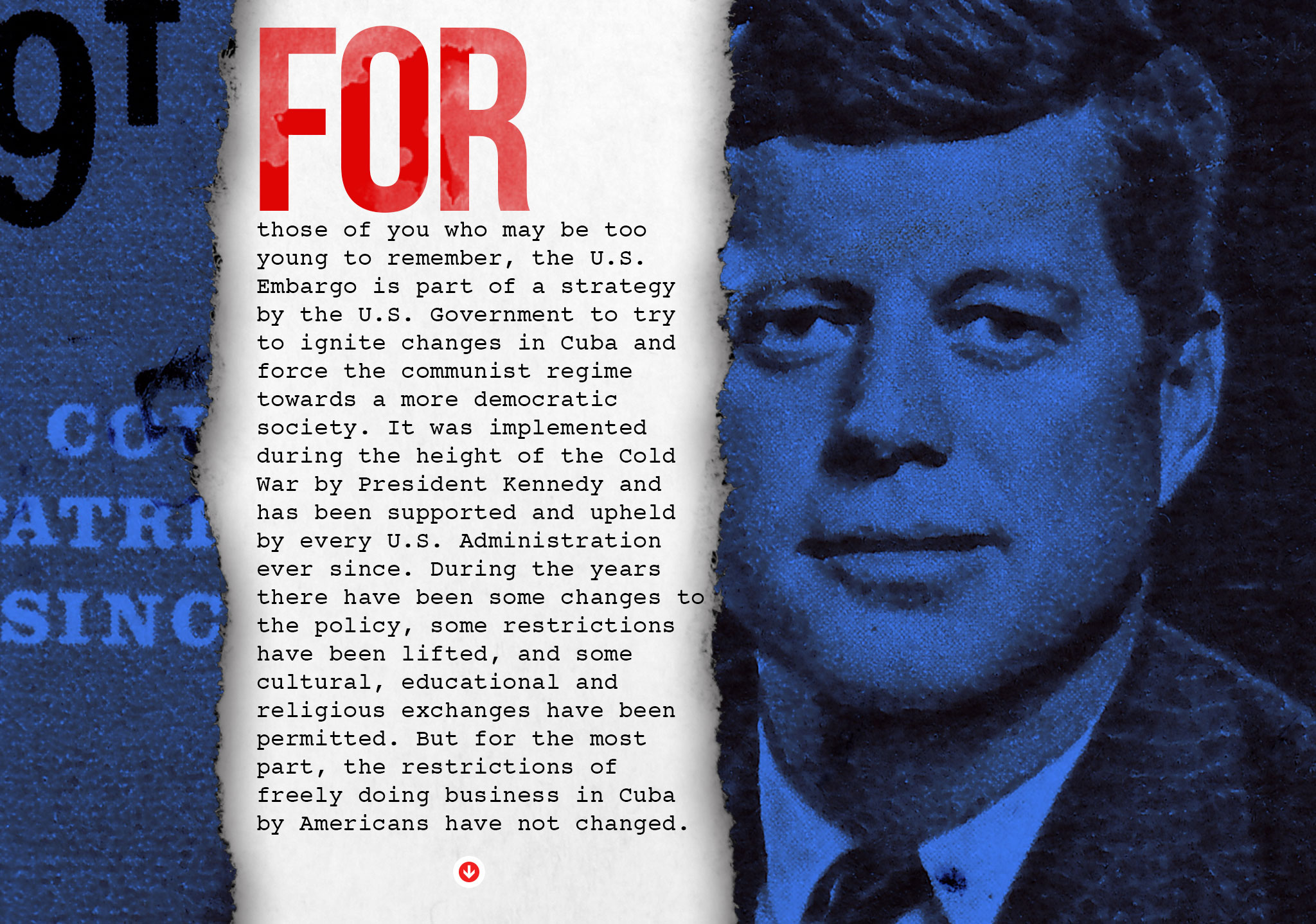 For me, it is a deeply personal and emotional issue. Having been born in Cuba, I suffered the horrendous attempt of the communist dictatorial regime to control every aspect of the Cuban peoples’ lives. Control of what to say, what to think, what to wear, what to eat, what to believe in (or rather what not to believe in), what to study, what music to listen to, and what consequences will be paid for even the most minimal deviation from the government’s ideology.

The U.S. Cuban embargo, for me as well as for many Cuban Americans, became a tool of punishing the Cuban regime by restricting access to American consumers and the mighty American Dollar. Since all businesses in Cuba are owned or controlled by the government, buying a Cuban cigar or any other Cuban product was seen as a way of helping the regime. 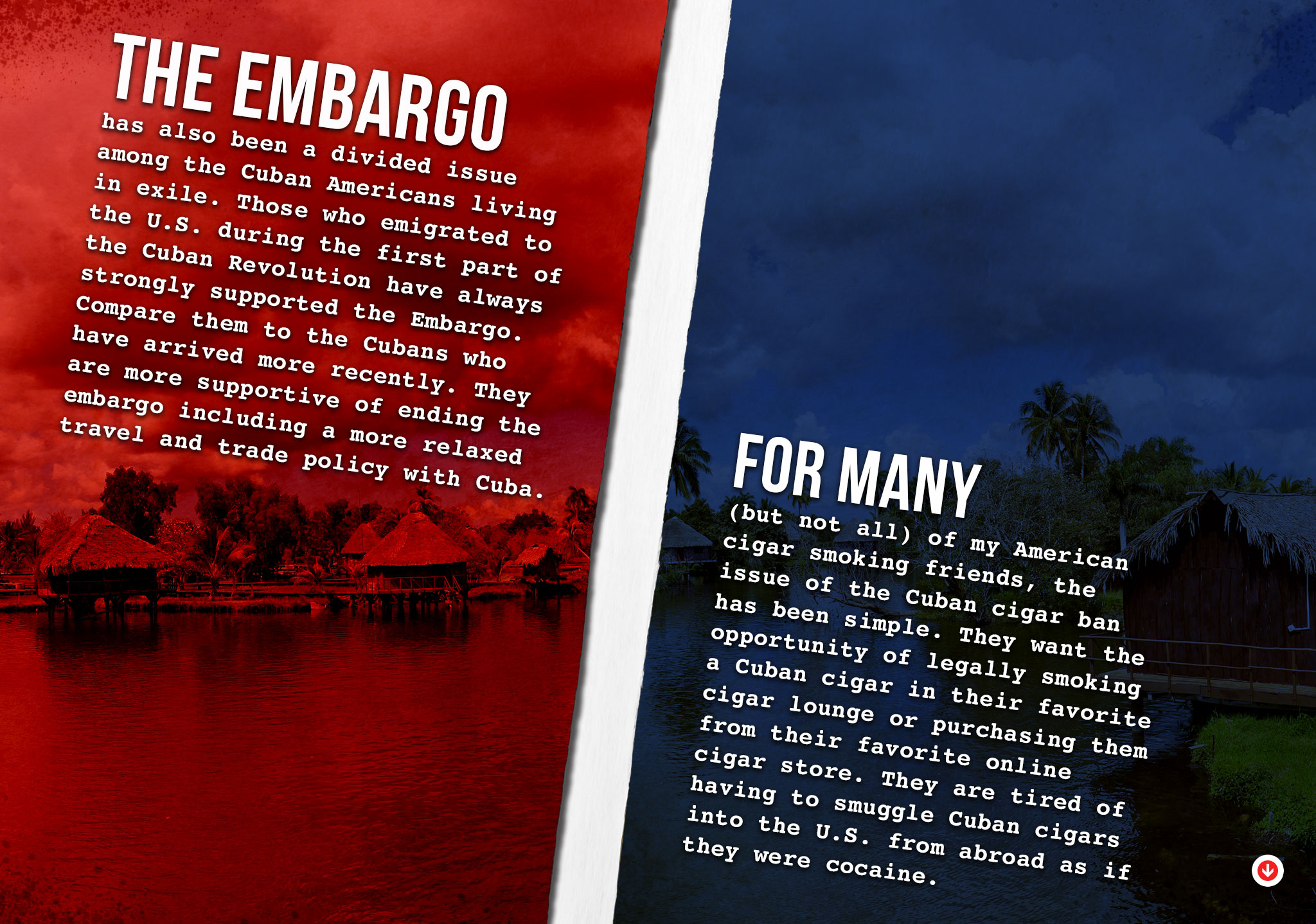 For me, it is obviously more than that. The end to the embargo will not only allow the free sale of Cuban cigars among local tobacconists, it will give the American market access to Cuban government-controlled companies as well as access to loans that will help the Cuban government perpetuate its control over its people.

However, as supporters of ending the embargo argue, it will also give access to American companies to the Cuban market; a market hungry for investment, while exposing the Cuban people to a world of new products and brands that they have not had access to for 50 years. 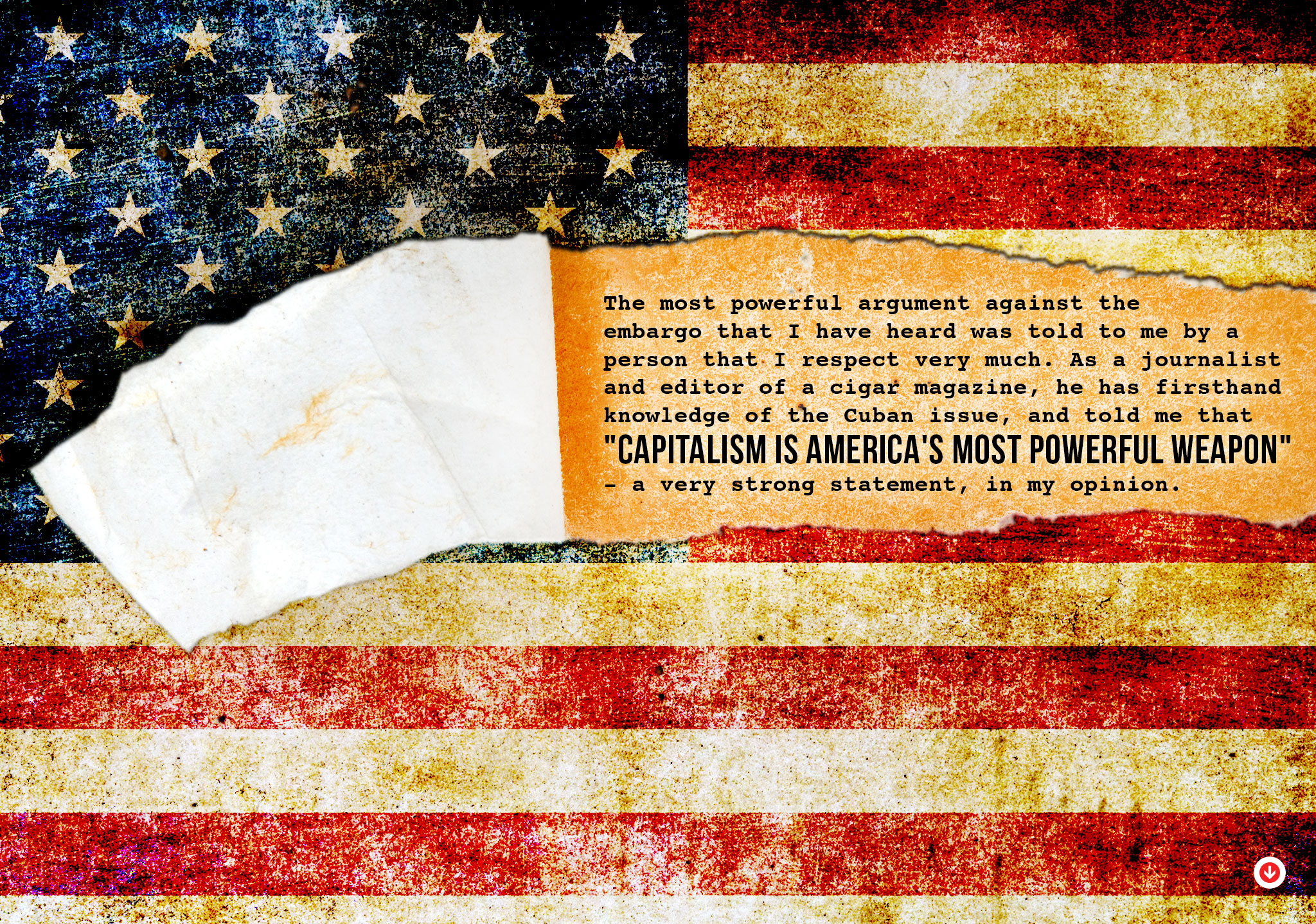 As I travel around the world, it is hard to miss the takeover of international commerce by corporations like McDonalds, Burger King, KFC, Gap, Apple, HP, Starbucks, and thousands more American brands, not to mention the movie and music businesses.

The world is hungry for American culture, and I have no doubt that it is all the better for it. With every pair of jeans that are worn, with every Big Mac that is eaten, with every Hollywood movie that is watched, people around the world are exposed to our American values which include freedom, democracy and the entrepreneurial spirit. 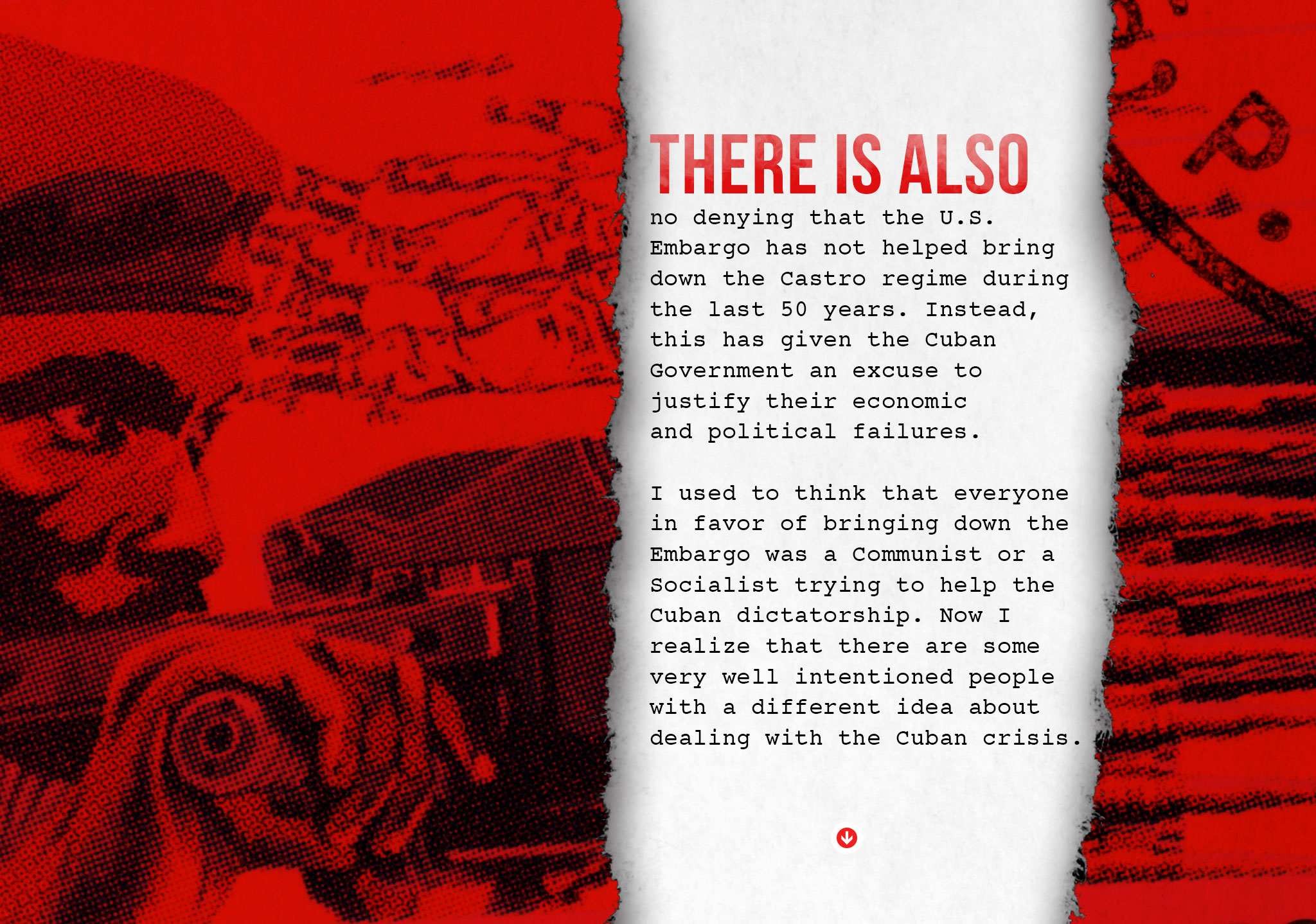 So, should the U.S. remove the embargo against Cuba? Should the Cuban cigars embargo be lifted so that they may be sold legally in the U.S.? We should all answer these questions based on our own values and conclusions. That said, I cannot, in good conscience, favor removing the U.S. embargo until there is a free and open society in Cuba. I will continue to guide my views on the embargo from what my father taught me: “You don’t deal with thieves, you don’t do business with criminals, you don’t help bullies and you certainly don’t help dictators stay in power to continue terrorizing its people.”

In the meantime, let’s enjoy the amazing selection of premium cigars sold legally in the U.S. that are created in the free entrepreneurial spirit of people like myself who work hard to earn the support of American cigar smokers by making the best possible cigar at the best possible price.

In conclusion, there is one thing I do know: there is no country in the world that has so many great cigars as the United States, and one day when Americans finally get to smoke Cuban cigars legally, I hope they are made by free Cubans.

Reading Time: 15 minutes Our Top 25 Cigars of 2019 are officially in the book: all are new-for 2019, and all made us jump-up and shout, “THIS is a GREAT cigar!” did your favorite new cigar make our list? Click now and see…