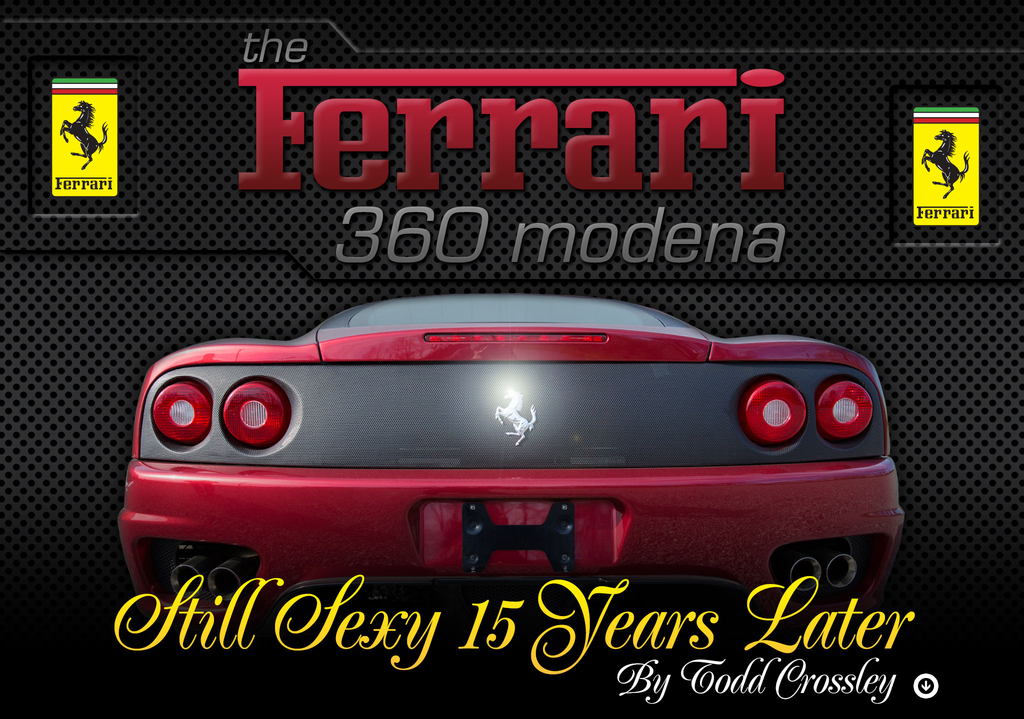 The masses will say that a car only needs to be able to get them from point A to point B – nothing more, nothing less. If you are reading this story we already know that you are not in the above category. You want and expect a car to be more. More engaging, more thought and emotion provoking, more soul stirring. One of the world’s most recognized brands has embodied this philosophy in all aspects of their existence: Ferrari.

The first Ferrari road car was the 1947 125 Sport, powered by a 1.5-liter V12 engine. In 1950 they began fielding cars in Grand Prix Racing (Formula 1). In 1952 Ferrari earned their first F1 World Championship and has enjoyed much success in all forms of Motorsports to this day. It is this illustrious racing heritage that makes their road cars so special. Their product line consists of Grand Touring Cars (GT), which are predominately front-engine, and Sport Cars, which are mid-engine units.

The F360 featured here was introduced in 1999 at the Geneva Auto Show. Instantly the car received praise for its stellar performance and its all-new curvaceous body. It was offered in a coupe (Modena) and a convertible (Spider). It was a significant car for Ferrari, employing emerging technologies for design and manufacturing and raising the performance bar for the supercar industry.

Most notable is the extensive use of aluminum alloys. The tubular “space frame” is crafted completely from aluminum, including both cast and extruded assemblies. The body panels are also aluminum. This resulted in a lightweight yet very strong structure. They were powered by a mid-mounted 3.6-liter V8 that pumped out a raucous 400 horsepower at 8,500 rpm. The engine featured 5 valves per cylinder, variable valve timing, titanium connecting rods, and many other technologies that were normally reserved for true race cars.

Standard was a 6 speed manual gearbox with Ferrari’s trademark Gated Shifter. An impressive F1 sequential gearbox was optional. The F1 equipped car could be driven in a fully automatic mode or controlled manually via paddles mounted on the steering wheel. The suspension continued the lightweight aluminum theme and incorporated cockpit-adjustable damping (Normal and Sport settings). The car was capable of zero to sixty miles per hour in the low 4 second range – very fast by even today’s standards!

All of this performance was wrapped in what many believe to be one of the sexiest mid-engine Ferrari bodies of all time. The lines were penned by Italian design studio Pininfarina. The 360 was also the first Ferrari with a clear glass engine cover.

“Many times at shows people were asking me on our stand, ‘May I have a look at the engine?'” Pininfarina explained. “The 360’s engine was a masterpiece, so we asked, ‘Why must we keep the masterpiece in the car?'”

The example pictured here is finished in rare Rosso Fiorano. Time is the true test of a design, and nearly 15 years after its introduction the 360 still looks fresh. I have always admired its clean and uncluttered design: it’s sporty and aggressive, without trying too hard.

Todd Crossley is a contributor to Cigar Advisor magazine.

Reading Time: 7 minutes Stop letting one dude in a suit speak for you and everyone else. In our Best-Rated CAO Cigars Under $10 guide, we put our faith in cigar consumers like you for the final say in what blends are best!