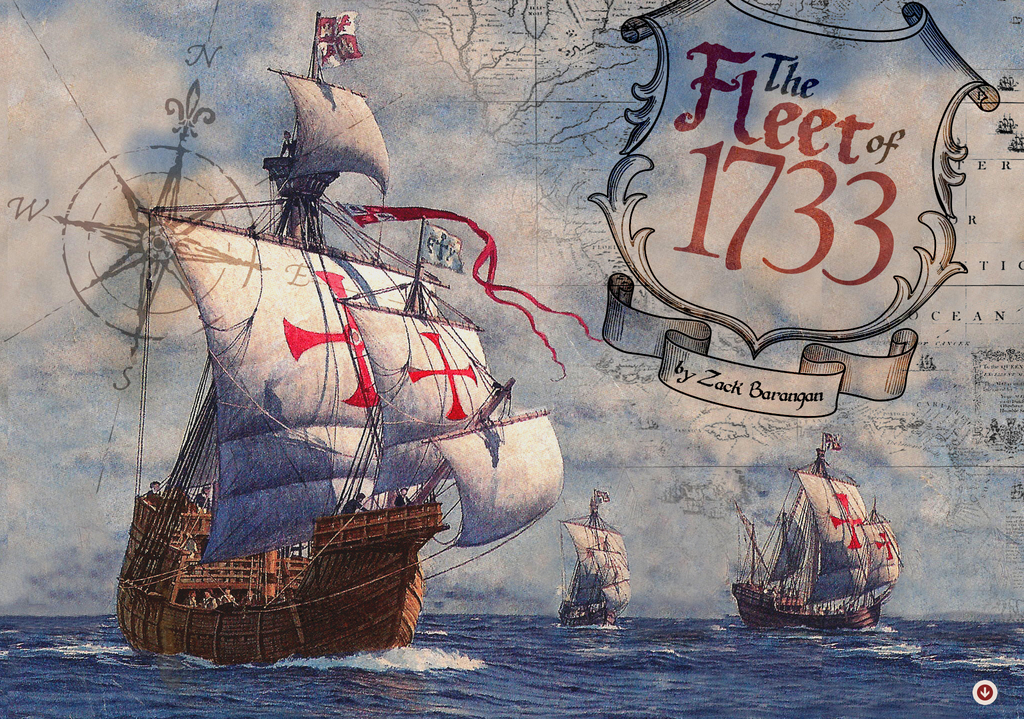 Four Spanish galleons…18 smaller merchant boats…a veritable fortune of 20,000,000 pesos worth of Mexican silver, gold, tobacco and other valuables such as wines, liquors and ironwork scribbled into their manifests. A flotilla of this size traversed the high seas between Spain and the New World on a regular basis; but even armed to the teeth with 60 cannons on the main gunship alone, the fleet would be no match for the war-making capabilities of the sea.

The Florida coast is littered with the debris and remains of many a ship that once called Spain her home. And just off the coast of the Keys lies a particular collection of sunken galleons known today as the “1733 Fleet.”

According to the history decoded through salvage and archeological expeditions to the site, it would seem that the tales of swashbuckling adventurers and courageous seafarers we read about as children are true: men aboard grand vessels who tangled with stiff ocean winds and the dangers of the deep. In July of 1733, a fleet of ships left Havana on their return voyage to Spain, carrying their haul of treasures back to the seat of the Spanish Empire. One day into the trip, the fleet encountered a disastrous hurricane. Nearly all the ships were lost (one managed to escape the weather and make it back to Cuba), though the Spanish Navy did an excellent job recovering the massive cargo in the years following the wreck. However, as some intrepid divers would find out hundreds of years later, the treasure that still remained was not only measurable in bullion, but as some of the most beautiful underwater sights in North America.

Mostly relegated to the filing cabinets of history, details on the 1733 Fleet were filed away and all but forgotten until the 20th century. Thousands of artifacts have been recovered from the 1733 Fleet, which now serve as a living history about the life and times of those who ran the trade route from the Caribbean to Spain.

Havana in the 1700’s was the hub for Spanish trade in the West Indies, seeing traders from all over the Caribbean. It was also the place you were warned about: think “sin city.” 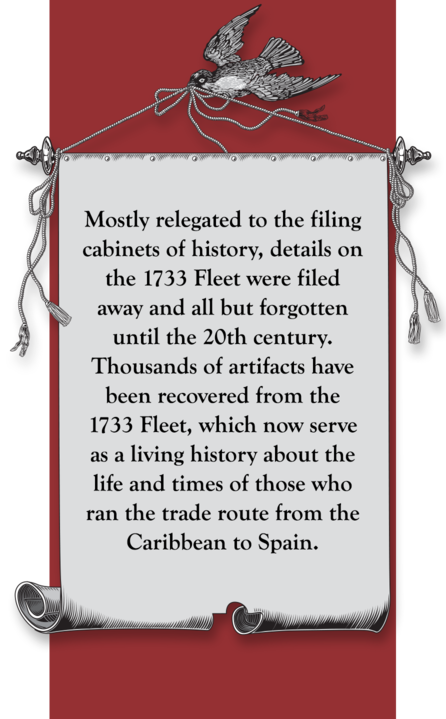 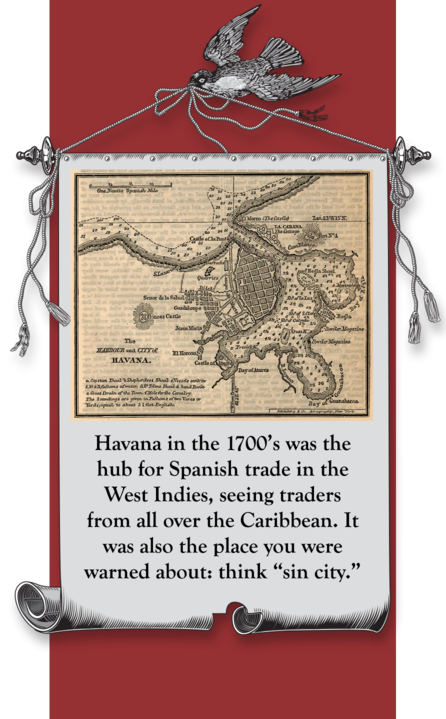 On Friday, July 13th, 1733, having just filled their holds with goods and treasures from the New World colony, the Nueve España fleet left Havana Harbor. Commanded by Lieutenant-General Rodrigo de Torres aboard the flagship Capitana El Rubi, the flota unfurled their mainsails sporting their signature red crosses and picked up the Gulfstream. They made the turn to the east on the 14th after seeing the Florida Keys off their bow. The winds, troublingly, began to shift; and sensing the danger, Torres ordered his ships to immediately turn back toward Cuba to avoid damage from the approaching storm. His decision would be in vain – a hurricane overtook the area, ravaging the fleet. One ship (the El Africa) would escape with minimal damage, and sail on to Spain; a few others would limp back to port. The remaining vessels – driven back to the west by the storm – were sunk, or ran aground along an eighty mile stretch of the upper Keys by Sunday .

Sailors are a superstitious lot. “No voyage should begin on a Friday,” as ancient maritime traditions have held that it would bring bad luck to the trip, thanks to evil sea witches (really). And on a Friday the 13th? Forget it: that would double the jinx factor. It’s rumored that insurer Lloyd’s of London refused to cover any ship that set sail on a Friday the 13th. Captains of ocean liners would come up with excuses to delay leaving port until after midnight, so that it was technically the 14th. It’s also said that the United States Navy won’t launch a ship on Friday the 13th. As for the captains that taunted maritime traditions, legends tell of many who found themselves pretty un-shipshape just a few days into their sail – or never even heard from again. So when do you go? “The seventeenth and the twenty-ninth of any month are good days to set sail, particularly if your voyage will last many months.”

A letter written by Spain’s Naval Commissioner, Don Alonso Herrera Barragan, to the President of the Council of Trade at Cadiz, described the event from the view of the Capitana El Ruby: “…the 14th we discovered the land of the Keys of Florida. At 9:00 that night the wind began to rise out of the north. It continued to freshen to the point where we all knew a hurricane was imminent. We found ourselves close to the expressed Keys, with the wind and seas so strong we were unable to govern ourselves, and each new gust came upon us with renewed major force. On the 15th, signs were made (among the ships of the fleet) to try to arrive back to the Havana, but we were unable to do so for the wind went around to the south without slacking its force or lessening the seas. By 10:30 that night we had all grounded in the expressed Keys at a distance of 28 leagues in length. This Capitana grounded on the one called Cayo Largo, two and one-half leagues from shore. I make assurance to Your Lordship that it was fortunate that we grounded for if the contrary had occurred we would have all drowned because the hold was full of water and we were unable to pump it out…” 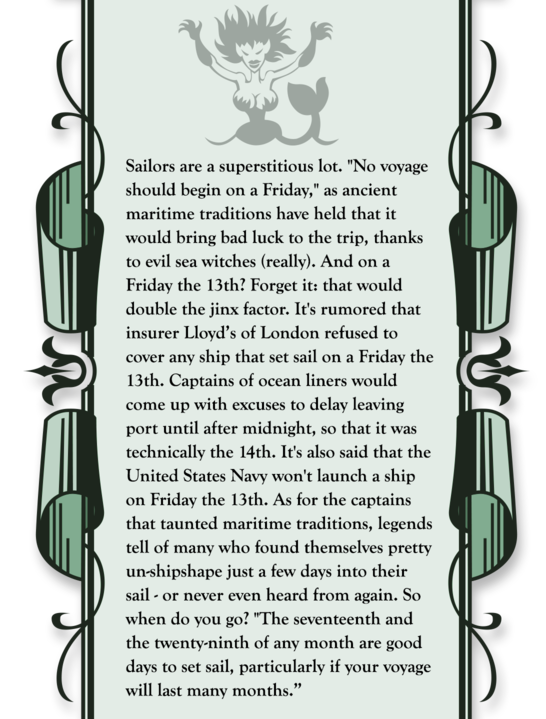 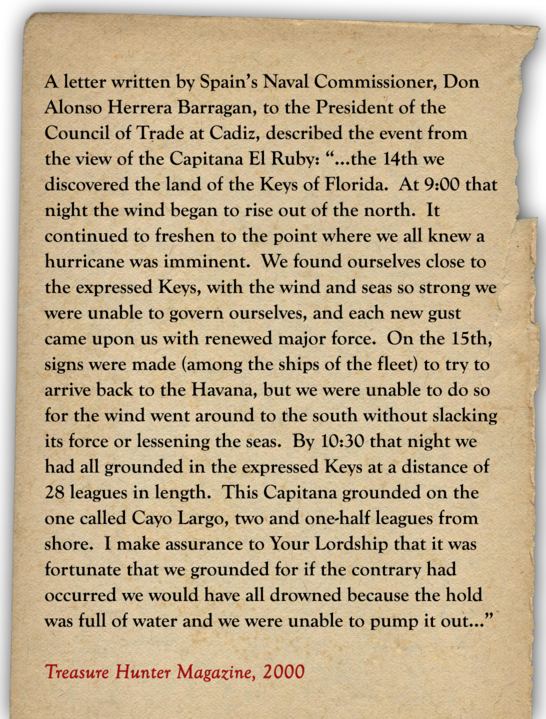 Though there were many survivors, a majority of the vessels were irreparably damaged. Stranded sailors built crude shelters from wreckage that had washed up on shore. Rescue boats loaded with supplies, divers, and salvage equipment arrived not long after, providing comfort to the men; soldiers accompanied them, to protect what had now become a recovery operation.

The salvage of the wrecked ships began just a few days after the storm. A few of the ships were re-floated with little difficulty. Those that couldn’t were burned to the waterline, which enabled rescue divers to descend into the cargo holds to salvage the goods. The process took nearly two years and hundreds of divers and recovery workers, all under the wary eye of the Spanish Navy: guard ships were placed around the wreckage to prevent looters from stealing the King’s goods. Once the final calculation of salvaged materials was made, the ships were left to their watery graves. Any remaining treasure was scattered across the sea floor by tropical storms that followed, destroying the rest of the already-sunken fleet.

When a final calculation of salvaged materials was made, more gold and silver was recovered than had been listed on the original manifests, the tell-tale evidence of contraband aboard the homeward-bound vessels. 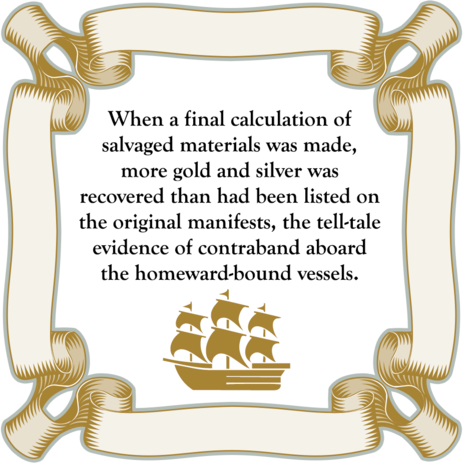 In the 1960s, a group of divers relocated the long forgotten ships, reintroducing them to the modern world. To the chagrin of treasure hunters, very few valuables were recovered from the wreckage (there was very little to be had – the Spaniards were very thorough 230 years earlier). But after further analysis, a much different kind of treasure was discovered…the wrecks that had previously been a proud Spanish fleet had turned into one of the oldest artificial reefs in North America. Over the years, the sunken galleons had come to support complex ecosystems. Marine life was now thriving in and around these massive ships.

Each of the wrecks are spread along an 80-mile stretch of the Florida Keys, so tourists and divers have a wide array of diving adventures to choose from. The northernmost ship wreck, the Populo, is located under the jurisdiction of the Biscayne National Park and is nestled in a beautiful ecosystem of white sand, coral reef and marine life. Divers visiting the Populo not only swim alongside a piece of living history, but a breathtaking slice of nature as well. Make the dive and you can look forward to swimming with grouper, angelfish, sea urchins and fire coral, just a sample of the flora and fauna.

In 1968 the State of Florida initiated a salvage contract program overseen by State appointed agents with archaeological oversight. The 1733 sites represent some of the oldest artificial reefs in North America, supporting complex ecosystems of marine life that have thrived generation after generation over the centuries. The real “treasure” of the 1733 fleet is the opportunity to visit the living remains of ships from an era long gone. 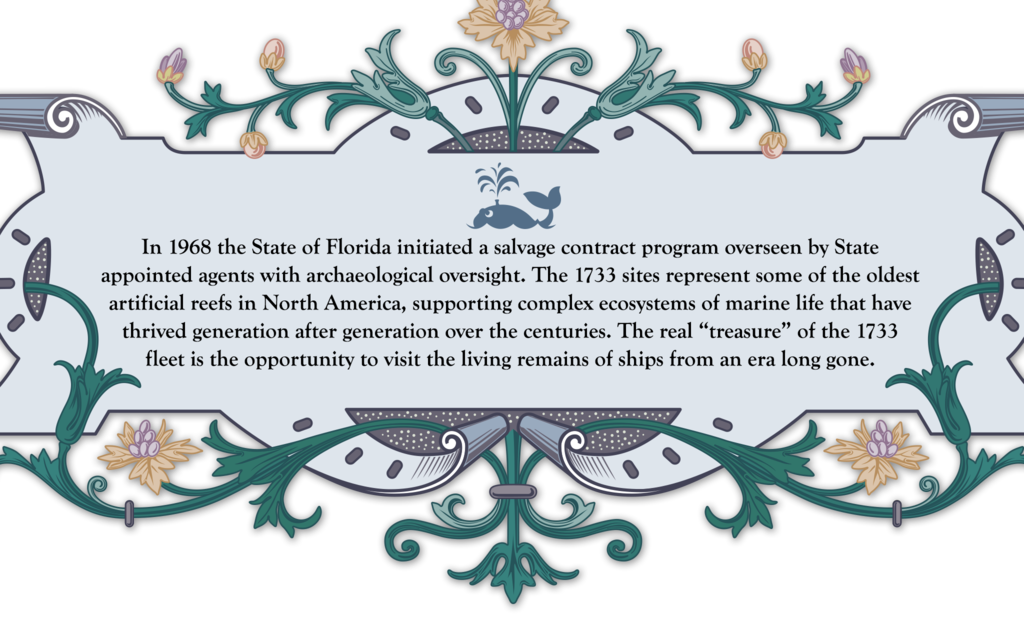 The El Rubi is grounded just inside of the reef line northeast of the Upper Matecumbe Key. Lieutenant-General Torres’ flagship held a healthy helping of King Philip V’s treasure: more than two thousand boxes of gold and silver coins, hundreds of ingots and various spices from Havana. The ship’s cargo was mostly recovered during the rescue efforts, and was eventually rediscovered by diver Art McKee in 1938. The wreckage of the ship was used to curate one of the world’s first museums devoted to a shipwreck, McKee’s Museum of Sunken Treasure located on Plantation Key in Treasure Harbor, Florida.

Quite a few dive shops and vessels will take you out to the wrecks to dive these breathtaking sights. The historical relevance of the 1733 fleet, along with the beautiful ecosystems that developed around the wreckage of these vessels, is a one-of-a-kind pair that both adventurers and historians alike must experience at least once.

If you plan to make the trip, Frank Feliciano has some solid wisdom for you at sunkentreasure.com: “anyone who plans to visit these sites should check into the Florida Statutes, which protect these wrecks. Some of the sites have been staked by modern treasure divers, others are the property of the State of Florida.”

So what can you see? Frank says, “I have dived on most of the [wrecks] and can tell you there are ballast piles at the locations – and in some cases, there are still huge beams among the ballast rocks. The sites are awesome to look at, they photograph well…and there are still coins washing up on the shore in the area of some of these wrecks. Good luck and happy hunting – don’t forget your Dive Flag!” 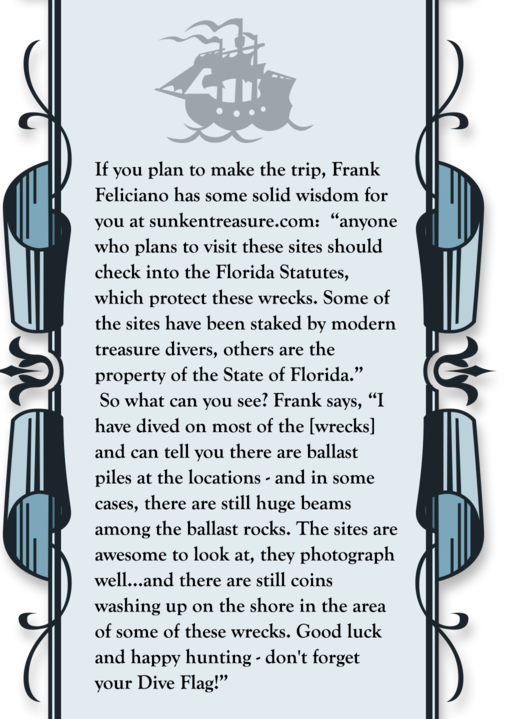 Reading Time: 8 minutes You’d heard the term puro cigars – but what exactly does that mean? Get the breakdown on what a true puro is, and the 9 top recommendations for a single country of origin smoking experience.