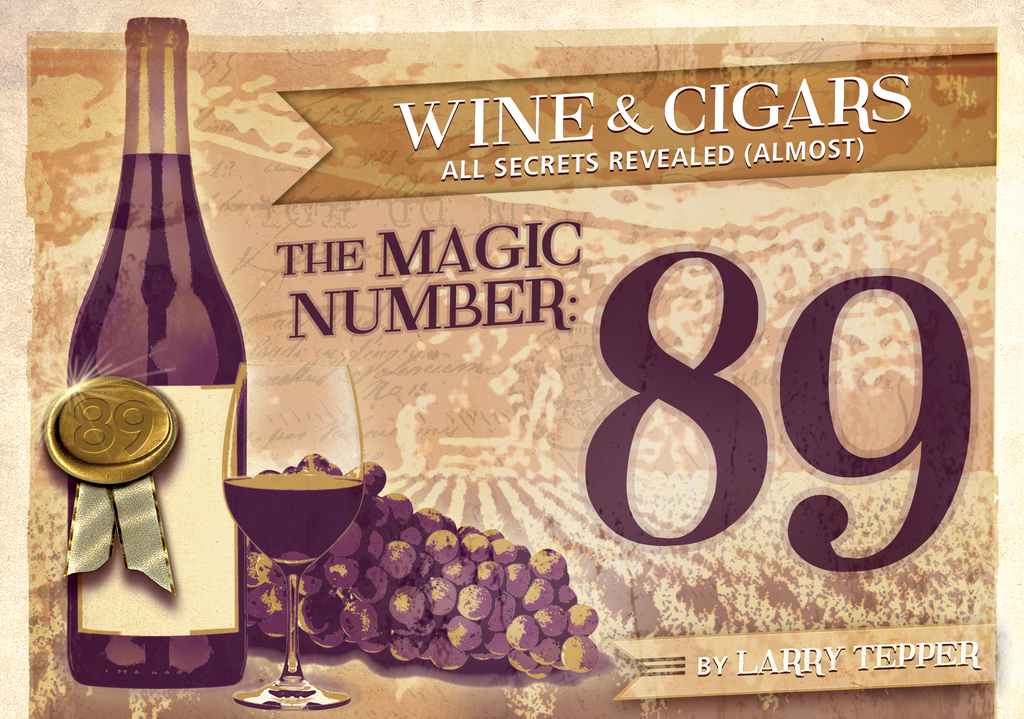 I have to admit it: I love a bargain. This is never truer than in the case of wine and cigars. When superb examples are found, they can be enjoyed right away and an additional quantity can be tucked away, later to be observed to have improved, often dramatically, with age. But how does one find a true bargain?

“Outstanding,” with the stratospheric 95-on-up band noted as “Classic.” I couldn’t agree more with it all, except for 89. To me, when a product scores and deserves and is an 89, I have usually found it to be nothing less than “Very Very Good.” Short of “Outstanding,” mind you, but distinctly a whole lot better than just “Very Good.” The make or break point — for wines especially — and in many cases cigars, too, is 89. I hold that number to be in a class by itself.

Out here in California we have a line of wines, officially labeled, Charles F. Shaw, but lovingly known as “Two Buck Chuck.” It was $1.99 a bottle exclusive at Trader Joe’s for years, but bad crops in 2011 and 2012 caused the distributor to jack the price up to a whopping $2.49. Actually it often is “Very Good,” surprisingly good for the price. But it surely is not an 89. And don’t try to age it. I did that once with one of their surprisingly good Cabernets and two years later the wine tasted DEAD — not vinegar, but just a ghost of what it had been. So, no, not an 89. In my book a Cabernet needs some staying power to gain my respect.

Now of course one may obtain dependably excellent “Outstanding” quality by only buying wines and cigars in the — let’s say 94 and above– range. Generally, you will not be disappointed, but you will be either a) wealthy enough so price doesn’t matter, or b) flat broke because you just spent all your money on first class wine and hard-to-get cigars. 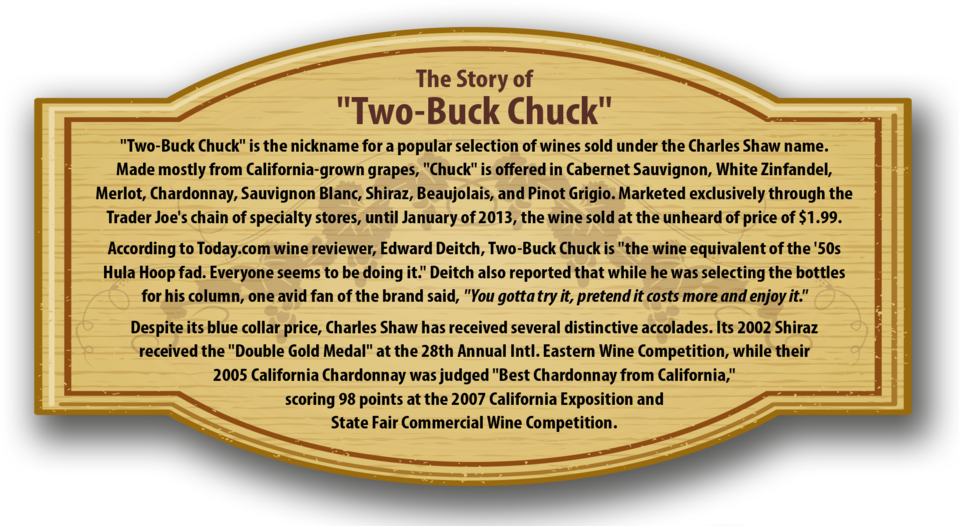 So, how do you get really good wine at a modest price? Well, I use the Magic Number 89. In order to find dependable, honest scores, first and foremost I go with Wine Spectator. Referencing their pages this past year I found several prime examples rated 89: Bogle Chardonnay 2010 ($8.99), crisp, complex, delicious; Joseph Faiveley Bourgogne Pinot Noir 2009 ($14.99), velvety and refined, a definitive Burgundian Pinot; and the Chateau Ste. Michelle Columbia Valley Merlot 2009 ($11.99), nobody does it better; all “Very Very Good,” yet not expensive. And every WS issue has at least a few tasty 89-rated diamonds-in-the-rough, priced well below lots of other wines costing more, yet scoring less.

In addition to Wine Spectator, my resource list includes the results from the Los Angeles County Fair and the Orange County Fair Commercial Wine Competitions. Both of these events employ professionals as judges — wine makers, wine writers, and the like. Gold Medals attained at these venues represent significant accolades, while “Best of Class” (awarded at both events) or Special Awards (i.e., “Chairman’s Award” or “Four Star Gold” at the O.C.) really catch my eye. Gold Medal winning wines from either of these fairs are usually pretty good, but the “Best of Class” and “Special Award” winners are always real stand outs no matter what numerical score they achieve, or what price range they happen to fall into. And once in a while a “Best of Class” or “Special Award” winner startlingly turns out to be a $5.00 or $6.00 wine! Here are three such examples that I myself bought and enjoyed immensely: the luscious, really yummy Sutter Home Moscato 2009, and the same brand’s zippy and zingy red Zinfandel 2005, plus the nearly-as-elegant-as-a-fine-Bordeaux, Turning Leaf Merlot 2009, yes, a “lowly” Gallo product and a stunning head-turner. All of these were impressively delicious, silky-textured textbook renditions of their type, yet laughingly cheap. And please note: the annual competition results from both of these fairs are available on the net for free. Wine Spectator subscriptions unfortunately are not.

Now a word to the wise is in order as regards wine ratings. I firmly caution you here about Fair Results and Awards from other venues, or numerical evaluations from other publications. Let’s just leave it at that. I don’t want to make enemies or risk getting sued by naming names.

A side note: I have been accused by some professional wine tasters as being “too forgiving.” Okay. Just bear in mind that we’re not discussing 97 point $150.00 wines here. Just “Very Very Good” wines which would likely score an honest 89, and which you and I can comfortably afford to enjoy any day of the week.

Now as for cigars, no one would ever accuse me of being too forgiving there. I am critical almost to a fault. But that’s just because I am far more subjective in that department, always looking for the particular flavor profile that satisfies my old school palate. Yet, if we again look to and depend upon the tasting notes from certain publications employing the same tough criteria and “blind tasting” procedures, the exercise will often yield some very pleasant surprises.

On the net you can access “The Best Cigars” of a given year from several cigar resources. Well, there are a whole lot of good, expensive cigars on those “Top 10” or “Top 25” lists — along with a few inexpensive ones that you pretty much can’t find anywhere. However, starting in 2009 as an addendum to their annual “Top 25” list, one trendy publication added a terrific feature: “Best Bargain Cigars.” Well, here you will find 89’s galore, most of them in the $5.00 to $6.00 range with some running even less: Padron Londres Maduro ($2.90) and the Padron 2000 Maduro ($4.00), for instance. One cigar, which CigarAdvisor Executive Editor, Gary Korb, touted to me as one of his personal favorites appeared on that very first 2009 list as an 89: the Perdomo2 Limited Edition Maduro Epicure at $5.50/stick.

Check this out: Alec Bradley’s American Classic Torpedo ($5.00) made the list at 89 twice, as did the Arturo Fuente Double Chateau Fuente Sun Grown at $5.80. With that kind of consistent scoring you can buy them with confidence. In my opinion, a list of this kind is a great objective resource.

But we also have access to some additional dependable resources: the independent ratings volunteered by customers of some online cigar stores, and cigar forums. Oh, yes, sometimes someone will go off the deep end and totally pan a darn good cigar which lowers the average, but just be aware that we are dealing with a fragile hand-made product, and any number of things can glitch before it gets to the consumer; or maybe the roller was just having a bad day. Stuff happens. But never take one bad review — or even two — too much to heart.

Now frankly I consider that a high numerical rating given by a merchant who is selling a particular cigar (like you see on some other sites) probably ought to be counted upon less than a pre-owned washing machine salesman’s personal guarantee. But when I see a customer rating of 94, 95 or even a 96 or 97, and that cigar is offered at an attractive price, I go for it like the gold ring on a Merry-Go-Round. An enthusiastic consensus review and high rating from consumers is about as valid a measure as you’re going to get. Of course, I do realize that our folks can get a bit carried away and that their exuberant “Outstanding” 94’s and 97’s may really only be “Very Very Good” 89’s. But, hey, I’m good with that.

Keys to the City: Las Vegas