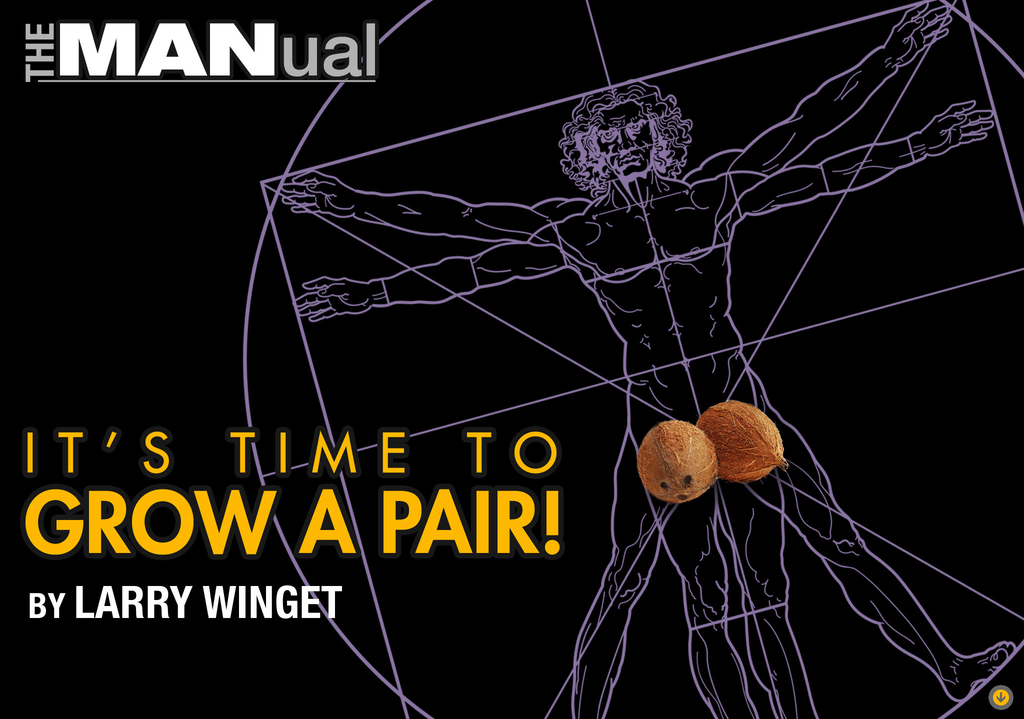 The MANual: It’s Time To Grow A Pair

We have become a society of weenies. That is sad to say but we all know that it’s true. For the most part, people are weak, sniveling, whining, backstabbing, gossiping, spineless weenies who let people walk all over them and rely on someone else to take care of them all while blaming the rest of the world for their own miserable lives. And it needs to stop!

People deliver bad service and we take it without ever saying anything about it. Friends say hurtful things about us and we don’t call them on it. We sit in theaters and allow people to text, take phone calls and carry on conversations and we don’t tell them to shut the hell up. We watch people throw their trash on the ground right in front of us and we don’t say a word to them. We even let out government, people we elect and whose salaries we pay, take advantage of us and what do we do about it? We vote the idiots right back in so they can do it again for another term.

It didn’t used to be that way. There was a time we didn’t take crap off of anyone. If you were rude or insulting, someone knocked you on your ass for it. If you butted your nose into someone’s business, they either told you or taught you to mind your own business. If you talked back to your mama, you got it from her and then you got it from your daddy too. If you got in trouble at school, your parents didn’t sue the teacher or the school; they knew you were the real problem and held you accountable. If you got bullied at school, your folks taught you to stand up for yourself, and then the teachers let you work it out on the playground or after school with little or no interference. If, as a country, you attacked us, we went to war and kicked your ass.

Want a list? Begin with crap like the book, The Secret and that stupid Law Of Attraction that both teach that all you have to do is think pretty thoughts and you can attract success and wealth. Real men and women know that it takes work to be successful. You don’t think your way to success; you work your way to success. But that crap sells because it is based in laziness and people have become lazy and don’t want to work to earn their success any longer – they want it handed to them because by God, they deserve it.

Then you’ve got political correctness, which is the most castrating thing to ever happen to us. I watched a woman on TV the other day crying because her friends told her she was a liar. She said that was hurtful and that she was simply “truth-challenged.” I nearly puked. If you don’t tell the truth, you’re a damned liar!

We have also become sue-happy. Don’t pay attention and walk into a fountain at the mall and you get to sue the mall and the fountain maker for the fact your head was up your ass and you got wet and embarrassed yourself. Sheesh.

All of this needs to stop before we completely lose our country, our businesses and our dignity. We need to know what we believe, why we believe it, and be willing to speak up and stand up for it even when the idiots tell us we are wrong. You have rights! Rights that go past the first amendment and the second amendment (even though I dearly love both of those for sure!)

But you are going to have to grow a pair! How? Pay attention:

That’s a partial list but it’s a place to start. You need to grow a pair in your life, in your business, with your family and kids, with your money and in society. Remember, it’s not about being obnoxious, arrogant, loud, rude or abrasive. And growing a pair isn’t about what’s between your legs, it’s about what is between your ears. It is an idea and an attitude grounded in personal responsibility, integrity, honesty and doing the right thing in every situation no matter what!

It’s time to change things and it’s up to you to do it. You may not change THE world, but you can certainly change YOUR world.

Read More
Cigar Buying Guides
Lighting-up on graduation day is a time-honored tradition; we’ve compiled an A+ list of graduation cigars to go with the cap and gown at your special event.
Read More

So You Want To Open A Distillery