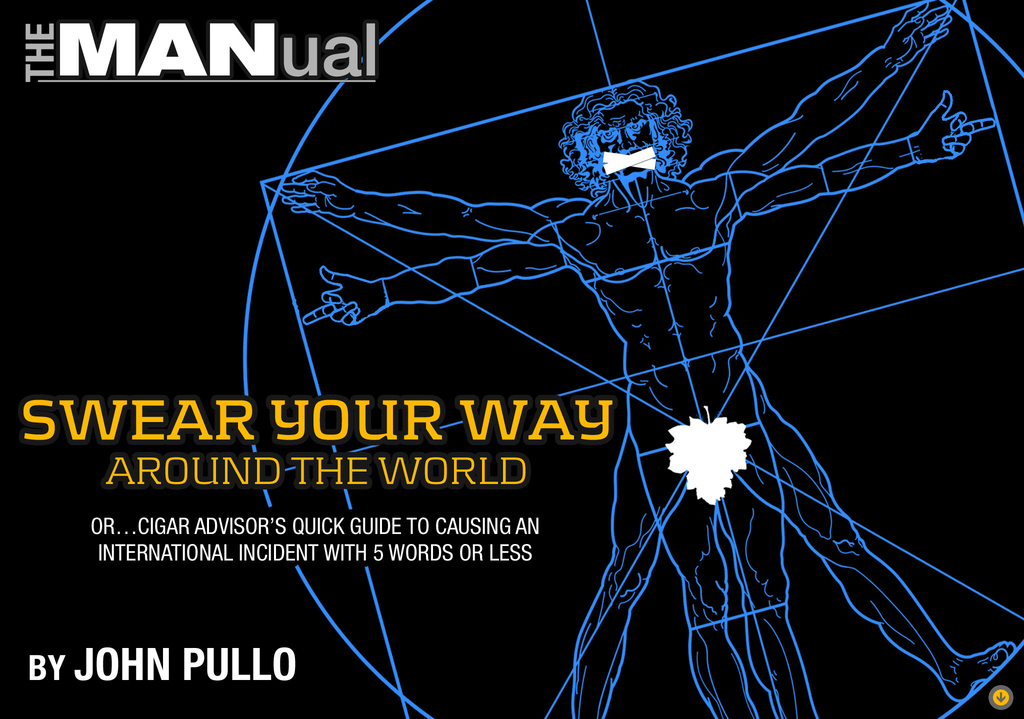 Face it – for as much as we, as Americans, like to travel – we're not the most well-regarded lot around the world. Folks in some other cultures just don't think very much of us, mostly because they think we trot all over the globe and demand that they all speak English. It also doesn't help our standing in the world when we make fun of everyone who’s different from our view of ‘normal.’ Do they have a point? Maybe, but it's really not fair to call us all a spoiled bunch because of a few bad apples. Hate on us if they want, but we gave them Costco, Starbucks and McDonald's…suck on that, you pretentious jerks. You're welcome for our travel and investment dollars stimulating your economy.

In our defense, we certainly don't demand that every place else be like America. After all, if everywhere were the same as here, what would be the point of us going? To find new things and explore new experiences, of course. But while we're there, it's a sure bet that we're going to mess with peoples' stuff around the globe. It's just what you do on holiday. And the locals just aren't gonna like you for it, no matter how polite you are about it.

In conclusion. it is what it is: all people are assholes, especially when given the title of “tourist.” So we've developed a quick and useful guide of common situations and appropriate reactions for you to act the part, and live up (or down, in this case) to their expectations – and an opportunity to give them a nice little surprise in the local language, while you're at it.

#1
Stepping off the curb, you approach one of the cabs standing at the ready with the exact phrase in mind – the one you've been practicing all day – that you'll need to get the driver to understand where you need to go. It also happens to be raining like hell – and as you open the car door, someone who is obviously unfamiliar with the concept of “waiting his turn” elbows you out of the way, knocking his briefcase into your gut. He's now trying to pull the car door closed, and is yelling at the cabbie to get it moving. He must be in a hurry, and is obviously important. Depending on where you are, a great way to react is to yell:

Japan: “Kisama” [Lord of the donkeys]

The Netherlands: “Schaamhaarvlechter” [Twiner of pubic hair – this is, actually, quite offensive.]

Any obvious inclusion of his mother will, most often, elicit your desired result.

It's not just the words that matter – it's the actions, too. Take some simple hand gestures, for example…here in America, they might mean “ok.” Elsewhere, they mean “you're an asshole.” Here's a quick reference:

To them it means: “Your wife is a whore.”

Where not to do this: Spain, Portugal, much of Central America & the Baltics

Hand Gesture: Both hands (open) pointing to your stomach

To you it means: “I have a pain right here.”

To them it means: “I write it on my testicles.” (or, you bore me and I am ignoring you)

Where not to do this: Greece

Hand Gesture: Placing your thumb behind your front teeth, and flicking outward

To you it means: “I have something stuck in my teeth.”

To them it means: “Screw you and your whole family.”
Where not to do this: India, Pakistan

To you it means: “My elbow is really sore.”

To them it means: “You're a stingy prick who never picks up the check.”

Where not to do this: Mexico. In Germany (Austria, too) it means “you're an idiot.”

Hand Gesture: Flicking outward from under your chin

To you it means: “My beard is really itchy.”

Where not to do this: France, Tunisia. It's a display of masculinity, about 3 or 4 steps short of dropping your pants and pulling out your junk. In Italy, it's a milder brush-off that just means “nope.”

“Rude Hand Gestures of the World” 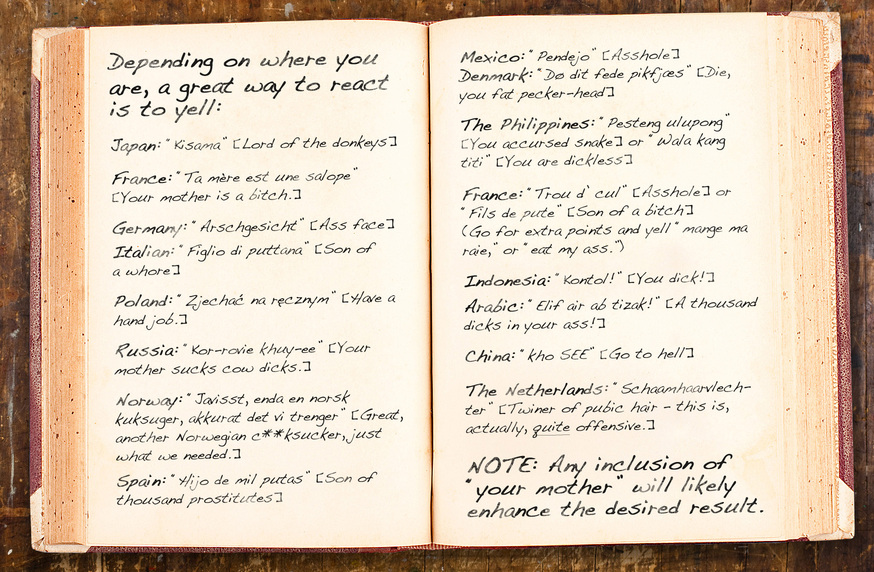 Your travel agent, who you must have pissed off in a past life, books the arrangements for your group to not only (a) fly via Canada, but also to (b) make sure the airline you're using makes their departure announcements in three languages, the third of which is English. And the girl at the gate making the announcement spoke so indistinguishably, you are completely oblivious of what she is saying until last minute; as another person took over making announcements, you heard the words “final boarding call,” “Toronto,” and “Gate D-5.”

You run for your life to the gate and show your ticket, which causes panic among the staff at the counter. One of them mumbles something into his pager, and a few seconds later, about fifteen airport staff members (not just a few of them armed) surround you. While everyone else is directed to board the airplane, the counter guy takes your ticket and walks away – and you feel a riot baton at your throat, and a taser in your back. Time to let a few fly – but how do you say “WTF” in a foreign airport? Like this:

Spanish: “Me cago en todo lo que se menea!” [I shit on everything that moves]

Any of these unfortunate events we're discussing here would allow for using any of the phrases we're learning today. But then there are generic swear words…only a few languages have one; and those that do, speak it with a universal grace. The Chinese (Cantonese) have “Poq Gai” (translated as “go die in the street”)…In Romania, it's “La Naiba.” The Czechs say, “do prdele” the same way Italians might use “managgia tua.” But the mother of all curse words comes from Spanish, which is “coño.” It's like if we mixed “damn” and “hell” together, using the f-word as a binding agent.

Few words in Spanish – or any language, for that matter – have the wealth of uses and meanings as ¡coño! Drop something on your foot? ¡Coño! Want to tell the woman in front of you what you really think about her? ¡Coño! Used as a statement for just about any emotion – surpise, joy, anger – it can fly as mild as “damn” (both good or bad) or as stunningly insulting as, well, just about the worst one you can come up with on your own.

It doesn't matter if it's a restaurant, a shop, a ticket window for the train – you're going to have to communicate with some guy behind a counter, who may or may not speak your language. Go ahead and ask: “Do you speak English?” We dare you. He'll probably say “no,” and quickly switch conversation to his mother tongue on the assumption that you couldn't possibly understand what he's saying – which is probably pretty interesting.

So your new friend carries on repeating the same sentences over and over in the local language, getting increasingly louder. He begins waving things in your face, probably screaming about your inability to understand how much things cost (though you can obviously read the price tags on the items, of course). Rather than award him double bonus points for arrogance, decide that you will give him your undivided attention and say “GFY” in….

To remove “yourself” and add his mother, try:

To add the whole family, you're looking for:

Lebanese – Airi bi mowtek […the dead in your family] 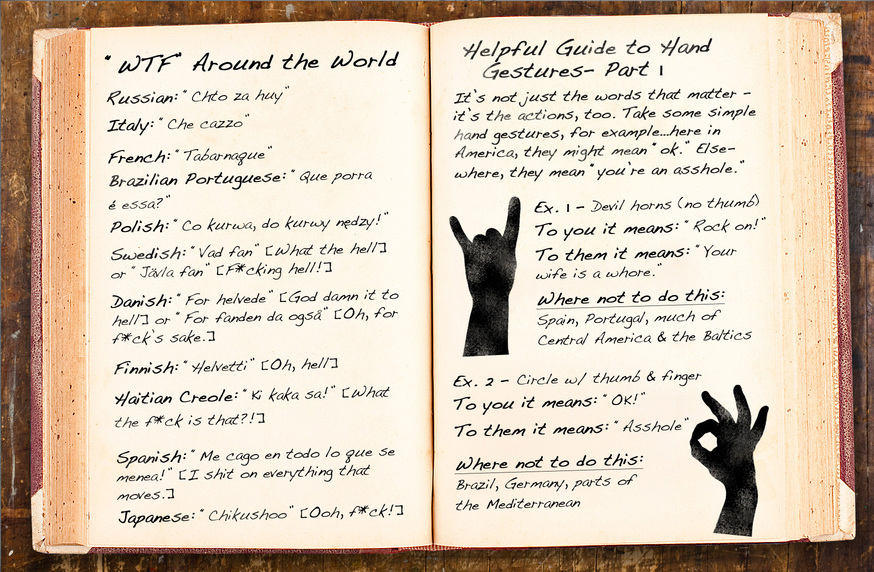 This next one will prove useful in a variety of situations. Maybe you've had an experience similar to some of the gems we heard

“When I came out of the restaurant, I found a local sitting on my rental scooter, wearing my helmet, and posing for pictures with his buddies.”

“An elderly woman then got on the train, walked straight towards me and sat on my lap – then wedged herself into the 6 inch gap between me and the passenger sitting next to me.”

“All of a sudden, some random guy walks up to me in the bar and says in broken English, 'I'm going to reach down your throat and rip your balls out through your face.'”

“Now they serve the in-flight meal. The woman seated next to me stops eating halfway through, and starts brushing her teeth at her seat, rinses her mouth out and spits in her cup.””Then this guy walked up to my friend, took the beer out of my friend's hand, and drink the whole thing…then pointed to the words 'National Muay Thai Team' on his shirt, and walked off…”

The best way you can react? Try these when you're in…

France: “Casse toi” [piss off] or “Va te tripoter” [Go diddle with yourself]

Italy: “Cazzo vai via stronzo” [Shit, get out of here, you jerk]

There you go – off you sail, ready to win friends and influence people. Look, no matter how much you study the language or try to embrace the local customs of these far-flung destinations, you're going to be labeled the “rude American tourist” the moment you step off the plane…so you might as well embrace it. Happy travels!