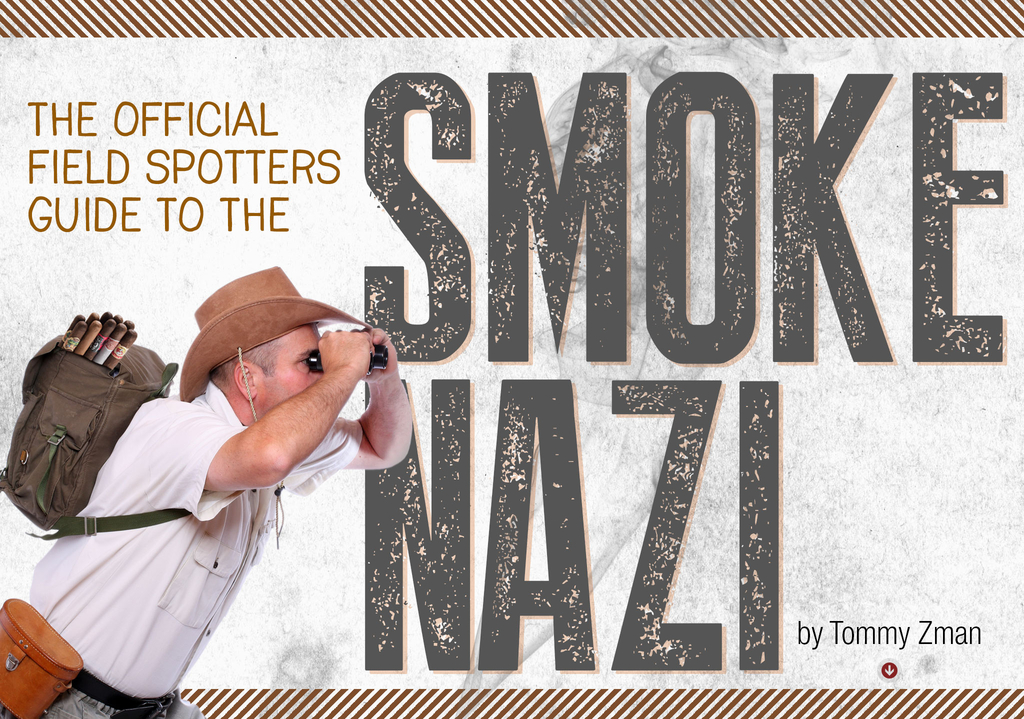 The Official Field Spotters Guide to the Smoke Nazi

“You have enemies? Good. That means you’ve stood up for something, sometime in your life.” – Winston Churchill

Everyone and everything has their natural enemy… The Hatfields had the McCoys, Batman has the Joker, a cobra has the mongoose, the Red Sox fan has the Yankees, and even Trump has Rosie O’Donnell. Oh, I could give you hundreds of polar opposites of the oil and water variety, but this particular piece is about a pairing that every reader of this fine, upstanding publication knows all too damned well.

The Cigar Smoker has the Smoke Nazi.

I have been enjoying premium hand rolled cigars for close to two decades now, and my confrontations with this dreaded beast never cease to amaze. They are a nasty lot and their overt agenda knows no bounds. They despise us smokers with a seething sort of hatred and wish nothing more than to have the act of smoking abolished and eradicated from the face of our good planet. Smoking genocide is their goal and they will stop at nothing to obliterate our love for cigars.

That’s right, I said LOVE for cigars. We all know very well that cigar smoking is not a habit, but instead the most relaxing and enjoyable act known to our kind. Cigar smoking is a lifestyle, one that is filled with a passion and appreciation for many of the good things in life. We don’t just smoke the damned things, we revel in them as the aroma and the taste become one with our very beings.

Now to the Smoke Nazi, that concept is about as foreign as a peanut butter and acid infused sandwich. (Okay designers, let’s see ya come up with a graphic for that one.) These festering turds haven’t a clue about what our cigars mean to us, and worse yet, they truly do not give a rat’s ash. They hate smoke, they think its evil, and because they don’t like it, then it should be eliminated. But that’s just not how life works here in the land of the stars and stripes. There’s something my parents taught me about long ago called freedom of choice. In our society, we are allowed to partake in an act that has been legal for hundreds of years. Cigar smoking IS legal. Sure we’ve been told where and when we can and cannot smoke and while those restrictions are getting tighter by the day, it is something that is still our choice, OUR RIGHT to enjoy.

If you’ve ever had the displeasure of a face-to-face encounter with a tried and true Smoke Nazi, you know all too well that in their minds, we of the stogie-loving contingent have no rights. To them, we are violating their rights by polluting the atmosphere with our Partagas, Pepins, and Perdomos. “I have a right to breathe clean, fresh air!” I was screamed at in the streets of Manhattan’s Times Square by a zealot with an agenda as wide as a city block. So I informed this belligerent troll of the facts – and facts are something the Smoke Nazi neither likes nor admits to. The facts make them uncomfortable and cause them to stammer like Bob Newhart delivering a punch line. They have a hard time dealing in truths, and that’s how you have to deal with ’em – you’ve gotta smash them right between their thickened craniums with the truth.

So, here’s the truth… it is documented that over 300,000 vehicles travel through Times Square EVERY SINGLE DAY. That’s a third of a million cars, buses, taxis, and trucks that cruise through a couple of blocks of New York City’s real estate, emitting more deadly toxins than one could ever even imagine – and this arrogant, pig-headed prick of a zealot is trying to tell me that my cigar is denying him of his right to breathe clean fresh air? My dad always said, “If I had a dime for every asshole on earth, we’d be living in a mansion in Beverly Hills.” And while I really have no desire to become neighbors with Eddie Murphy and Jed Clampett, I’d love nothing more than bitch-slapping the living Shinola out of some ignorant Smoke Nazi ass.

Oh, they’re not hard to spot at all, actually – and that’s basically because the overt hatred and their blatant stupidity allows you to see them coming from a mile away. That’s right, they’re morons, not only because they want to deny your rights as a free citizen, but because the spectacle they cause makes them look like the indignant jackholes they really are. So without further adieu, I present you with the 5 telltale signs that the Smoke Nazi commeth…

You’ve lit up your beloved cigar, a most gorgeous and oily stick, one that you plunked down a piece of your hard earned salary for. You’re walking on the other side of the street fer crissakes, and there he or she is, shooting you that look as if you just farted out their birthday candles. They try to be discreet but their animosity for smoke attacks the neurons in their brains and that’s when it becomes show time.

These Children of the Corn couldn’t look any scarier as the demonic stare that the Smoke Nazi gives you could burn a hole thru a stack of Gideon’s Bibles. They are displeased with your Liga Privada and Edicion Limitada, and the disdain and loathing for your sinful smoking act is as obvious as the mole on Lemmy from Motorhead’s face. This person does not like you, you are the enemy, and you’re about to find that out first hand.

“Has the Black Plague found its way into the 21st Century?” you wonder, because no real living person could possess a cough so guttural and pronounced. They bark like a Doberman while holding their stomachs, flailing their torso to and fro. It always kinda reminds me of when I faked being sick when I didn’t want to go to school. They’re starting to make a scene and that’s just what they want to accomplish.

STEP #4. The Animated Waving of the Hands

To accompany their ferociously faux coughing fit, the Smoke Nazi’s hands begin to wave in front of their face with such ferocity that one would be convinced that this person was being attacked by a swarm of killer hornets. The wave, combined with the cough is truly an amazing site to behold, one riddled with ignorance, guile, and blatant fucking stupidity. They are now making a bona fide ass of themselves, and the sad part is that they really don’t care because in their twisted minds, the ends justify their moronic means.

When all previous attempts at ruining your cigar smoking experience have failed, the Smoke Nazi will have the oversized pair of cajones to get directly in your face and give you a piece of their tiny little minds. They will let you know with a brazen fervor that your cigar is grotesque, it’s putrid and it stinks – and on a personal level, they think you are disgusting. Yes, they will have zero regard for manners or human decency at this point in the game, and if it were the Old West, 95% of these brutally rude sons of bitches would be mowed down in broad daylight. Blowing a gigantic puff of smoke straight into their acerbic and hideous faces is an act of survival and never frowned upon by yours truly.

So there you have it my puro pounding patriots, the Official Field Spotters Guide to the Smoke Nazi. As the saying goes, the Haters will always be hatin’ – and while you’ll never change their twisted mindsets and the bizarre and inhuman ways they act, with the help of this timely and informational guide, you’ll spot the angry bastids from a country mile away. Don’t ever let yourself become a victim of the Smoke Nazi’s Neanderthal nature. Stand up for your rights, smack ’em in the face with the truth, and may God bless each and every Brother and Sister of the Leaf. I’ll sure as hell light one up to that.

Very true I’ve seen and heard these same nitwit too.

An added thought, to help you understand the Cigar Nazi a bit better: http://www.sott.net/article/128768-Recognising+Anti-Smoking+Types

Reading Time: 3 minutes The only things we love as much as new cigars are some new toys – this time, it’s a load of Jet Line lighters that have made their way in to Famous. Let’s check ’em out!

Operation: Cigars For Warriors – Thank You Letters Received from our Warriors Abroad