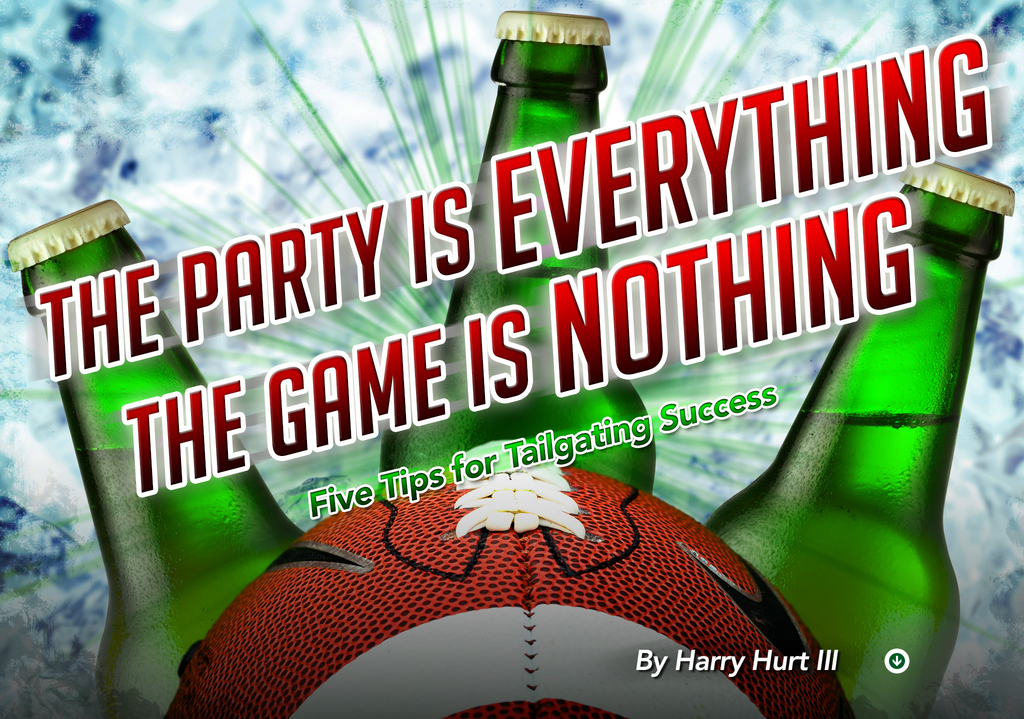 Football season is upon us and so is what millions of football fans feel is the very best time of the year — tailgating season. Tailgating is one of the most All American of celebrations, but its origins actually trace back even farther than those of cigar smoking. Christopher Columbus is widely credited for “discovering” tobacco on his late 15th Century voyages to the New World, but our tailgating rituals are descended from the harvest festivals of ancient Rome and Greece.

That’s according to a two-year long study by Notre Dame cultural anthropology professor John Sherry. (Yes, the Fighting Irish apparently research any and all subjects pertaining to football)! Sherry also compares tailgating to picnics organized to watch Civil War battles and to modern day rock concert campouts as a way for civilians to participate vicariously in the team experience and to bond with each other.

“People eat and drink and build up community in the process,” Sherry recently told USA Today. “It’s more about sharing than it’s about competition. It’s one of the last blowouts before we hunker down for winter.”

Joe Cohn, unofficially acclaimed as the “Commissioner of Tailgating” for having participated in umpteen thousand stadium parking lot parties over the past few decades, claims that tailgating serves as a replacement for what has been lost amid economic upheavals in our cities and suburbs. Cohn calls tailgating “the last American neighborhood” and “the new American community.”

We’ve conducted our own independent study based on interviews with veteran tailgaters and a thorough analysis of that classic in off-the-field literature, John Madden’s Ultimate Tailgating. Our tips may not be as academically rigorous as the findings of the Notre Dame study, but we hope they’ll help you make your tailgating experience more fun — and safer — than ever. Remember that proper preparation is the key to prime time performance, and as that great philosopher Homer Simpson once observed, when it comes to enjoying football, tailgating is everything and “the game is nothing.”

DESIGNATE A DRIVER AND GET THERE EARLY

Our veteran tailgaters urge you to do this first, before you have too much fun and forget. The only thing more important than having a good time is making sure you and everyone else in your party can get home safely. They also recommend getting to the stadium four hours prior to kickoff. That will enable you to find a good spot in the parking lot, and give you plenty of time to set up and warm up for the game.

If this is second to safety, it’s foremost in enjoying yourself before, during, and after the game – and something you’ll deeply regret forgetting prior to leaving home. 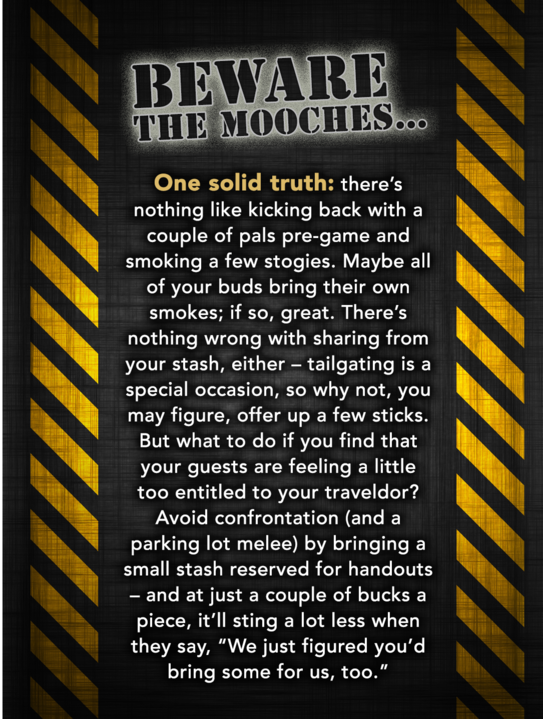 Be sure to pack your iPod, your tablet computer, and that mini-TV you never use at home so you can listen to music, tune in to the pre-game shows, and even watch the game itself if you end up tailgating past the kickoff (it happens – trust us). It’s also a good idea to bring along a few games to play in the parking lot: a folding ping pong table for Beer Pong, for example, or a piece of plywood with a pre-cut hole for that wonderful corn stalk-pitching game known as “Corn Hole.”

Depending on the size of your party, packing a relatively small outdoor charcoal grill is vastly preferable to lugging a big, bulky gas-powered model. But remember that you’ll still need a full complement of spatulas, forks, knives, and cooking mitts. Oh, yeah, and don’t forget the charcoal and the lighter fluid. 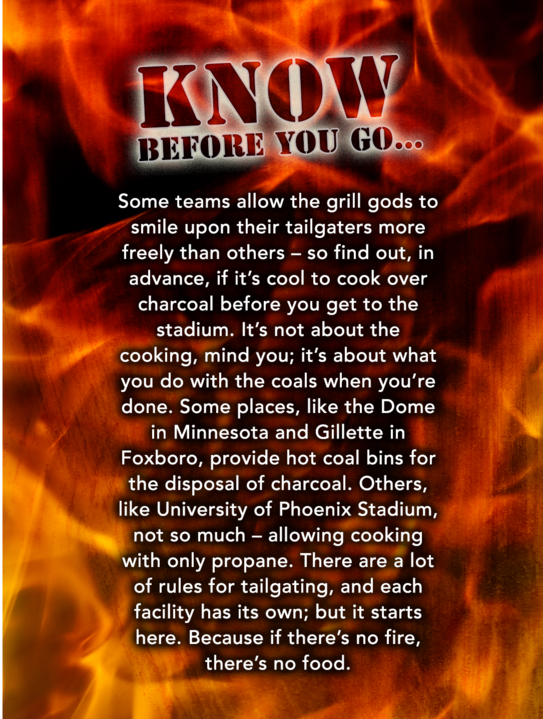 PLAN YOUR MENU BY TASTE AND OPPONENT

Next to premium cigars, the most important components in your tailgating are the adult beverages you bring to the party, which can last a full day. For a breakfast of champions, try vodka and orange juice. For a light lunch, a keg of light beer will do. And for that post-game hangover dinner, nothing beats Bloody Mary’s.

NFL tailgating guru John Madden distinguishes between two basic types of menu items: “floaters” like salads, sushi, and other light fare which he disdains, and “sinkers” like chili, pork chuck, and sink-to-your- stomach-bottom fare which he recommends. We say to each his own when it comes to choosing tasty tailgating foods – but stick to what you like.

One of our more creative tailgating consultants, a rabid New York Giants fan, plans his menus according to the foods associated with that week’s opponent. If it’s the Eagles, he cooks Philadelphia cheese steak sandwiches. If it’s the Carolina Panthers, he serves barbecue. If it’s the Miami Dolphins, he fries fish. When it’s the Baltimore Ravens, he goes for crab cakes, even if the defending Super Bowl champs make him end up eating crow.

One more thing – dress appropriately. If it’s cold and you’re not wearing enough layers, you’ll be fighting for space near the grill to warm up; if it’s warm on game day, you can only strip off enough clothes before security drops by. Good luck – your team – and your fellow tailgaters – are counting on you.

Cigar Smoking Mobsters: They Died with their Cigars Lit

Keys to the City Miami