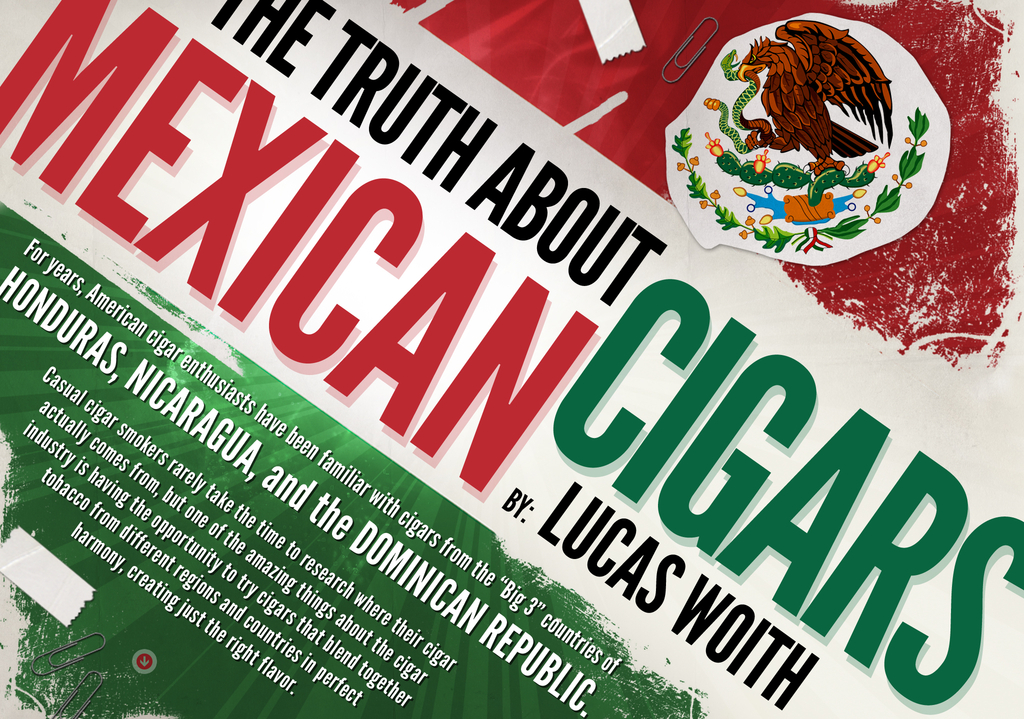 The Truth About Mexican Cigars

For years, American cigar enthusiasts have been familiar with cigars from the “Big 3” countries of Honduras, Nicaragua, and the Dominican Republic. Casual cigar smokers rarely take the time to research where their cigar actually comes from, but one of the amazing things about the cigar industry is having the opportunity to try cigars that blend together tobacco from different regions and countries in perfect harmony, creating just the right flavor.

Cigar enthusiasts who delve deeper soon realize there are many other countries which produce cigar tobacco. While tobacco is grown as far north as Canada and as far south as New Zealand, the best cigar tobacco comes from the regions between the Tropic of Capricorn and Tropic of Cancer. Countries such as Ecuador, Cameroon, Colombia, Brazil, and the United States provide tobaccos of varying flavors, adding greatly to the composition of many premium cigars.

Among cigar- and cigar tobacco-producing nations, Mexico has suffered a less-than-stellar reputation. Until the mid-1990s, tough import restrictions and tariffs on tobacco in Mexico limited most manufacturers to producing puros, or cigars made entirely of Mexican tobacco. While it was not illegal to import tobacco to be used in cigar production, Mexican laws made it both costly and difficult to do so; applicants were required to supply exhaustive information to the Department of Agriculture on the tobacco crop, down to what types of fertilizers and pesticides were used. The process sometimes took up to six months, and many companies simply chose not to bother.

“We recently imported tobacco from Nicaragua and had to take several steps, including registering the shipment with the government, obtaining permits, and being on a special list of allowed importers, called the ‘Padron de Importadores.'”

Puros Santa Clara’s brands include Capa Flor, Madrigal, and Veracruz, among others.

Despite the time-consuming import process, the quality and reputation of Mexican cigars have benefited greatly. That’s not to say that its tobacco isn’t also world-class. 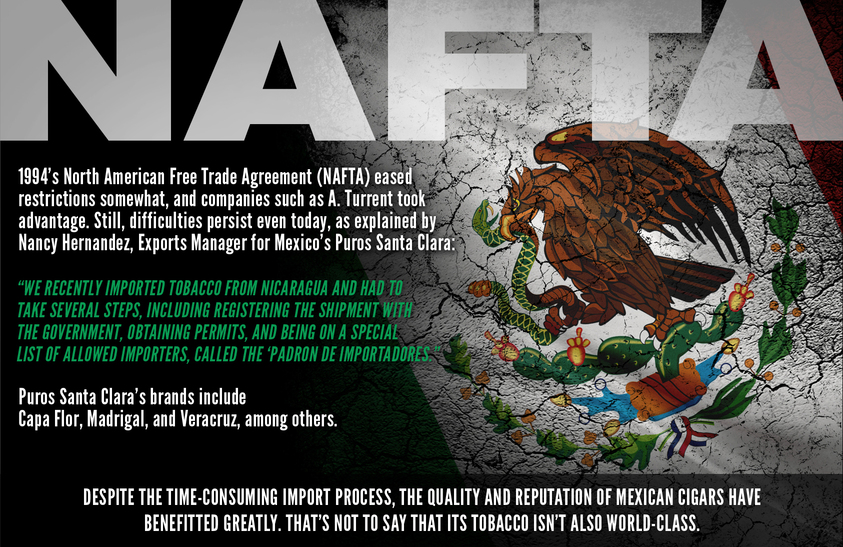 The San Andreas region of Mexico, located in the southeastern part of the country on the Gulf, boasts some of the finest soil in the world for tobacco production. Enriched by the region’s volcanoes, the soil yields leaf that is tough and is used by a number of non- Mexican cigar makers as a binder for maduro cigars. The Romeo y Julieta Viejo employs a Mexican wrapper, and is one worth trying for all cigar enthusiasts. Other brands such as Montecristo, Gispert, and Saint Luis Rey use Mexican wrappers on their cigars. The La Aroma De Cuba Mi Amor, produced in Nicaragua by Don Pepin Garcia, also uses a Mexican wrapper, and has earned nearly universal praise.

While it has also long been rumored that Padrón uses a Mexican wrapper on their 1000s and Anniversary series, the company has gone on record as saying that this is categorically not true. 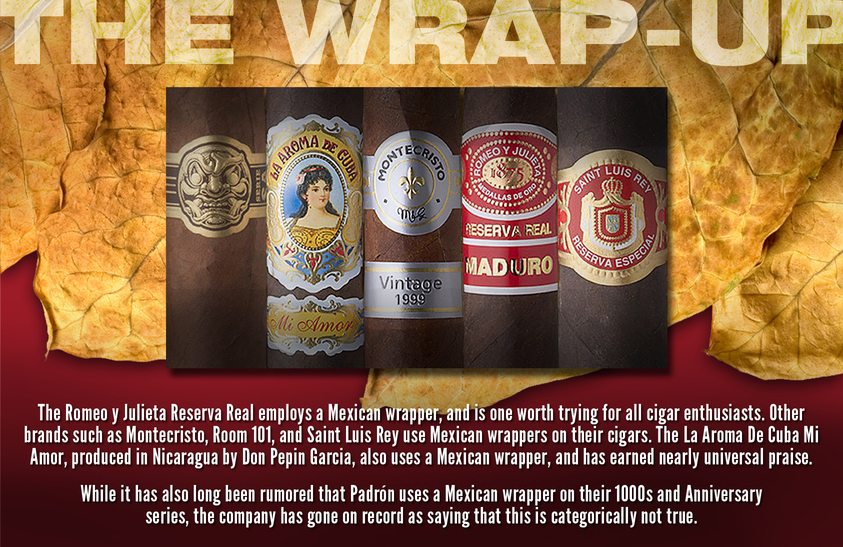 The history the Mexican cigar extends back to the Mayans, who used to smoke tobacco in pipes, as well as in loosely-rolled bundles resembling a primitive cigar. Today there exist dozens of cigar makers in Mexico. Some still use nothing but Mexican tobacco in their cigars; others blend tobacco from various countries together. Brands such as A. Turrent, Te Amo, Mito de San Andreas, and Julio Cesar all either produce cigars in Mexico, or use Mexican tobacco extensively in their blends.

The A. Turrent Puro Corojo is made in Nicaragua but uses Mexican cigar tobacco in the filler as well as for the binder. Contrary to the name, it is not a true puro, but it is a fantastic cigar that showcases the flavor and strength of Mexican tobacco very well.

Of the companies that actually produce their cigars in Mexico, the most well known is probably Te Amo. Known throughout 1970s New York City as the “cab driver’s cigar,” it is commonly overlooked due to its reputation as a cheap cigar. Te Amo Cigars are made in Mexico by the Turrent family, one of the oldest families in the cigar industry. They have consistently produced some of the best tobacco in the world, and the leaf used for the Te Amo is no exception. These are quality cigars that have a great price point and are perfect to enjoy while playing a round of golf or working in the yard.

Mexican tobacco and cigars are some of the hidden gems of the cigar industry and hopefully, before long, people will venture out of their comfort zones and try something different. That’s one of the best things about being a cigar lover: trying something new, something different, something that you may have never heard of, and falling in love with it. It happens every day in the cigar world.

A number of online retailers utilize Mexican-made cigars as exclusive house-blend cigars. They are cheaper than Dominican, Honduran, or Nicaraguan cigars, but offer great consistency and flavor, appealing to a wide range of cigar enthusiasts.

We all have those friends who say, “I only smoke Cubans,” or “I only smoke Dominicans”. These people are missing out big time. Today, country of origin matters less than ever. What truly matters is the quality of the tobacco, the blend, and the construction. For your friends who have a strong allegiance to one country of origin or another, try a test. Get a Te Amo cigar, take off the band, and have them smoke it. If they have an open mind, they’ll likely enjoy it and be amazed when they find out where it’s made, as well as its price point.

Despite the constant battle with cigar taxes, smoking bans, and FDA regulation, there has never been a better time to be a cigar enthusiast. With so many great brands and blends coming out these days, it’s hard to keep up. Try something new, and you just may discover a new favorite!

Thank you, I will give the Te Amo a try. It’s always exciting to find something new. Thanks again.