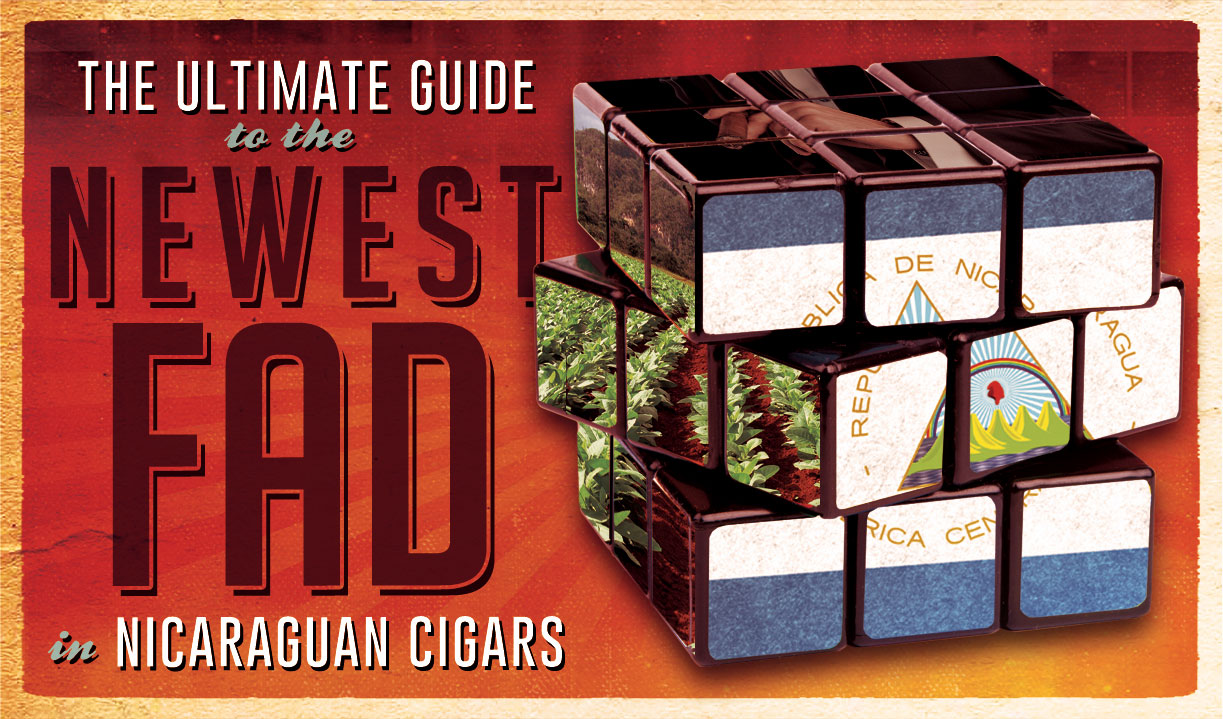 2018 CA REPORT: The Ultimate Guide To The Newest Fad In Nicaraguan Cigars

Remember when shoulder pads and mullets were cool? Yeah, trends are great short term, but the Nicaraguan cigar trend is going to last and here’s why. While Nicaragua has been producing some of the finest tobaccos in the world since the 1960’s, it’s been on a naming kick lately. In just the last 5 years, over 25 new cigars were released with ‘Nicaragua’ or ‘Esteli’ in their names alone. So how do we navigate the waters of this rising trend?

Unless you’ve been living under a rock for the last 40 years, you may have noticed the rising tide of Nicaraguan tobacco. Before it took the world by storm, it all started with a ripple. In 1968 Joya de Nicaragua, S.A. (the first Nicaraguan brand) opened its factory doors but, while its popularity grew, civil war led to a U.S. trade embargo, putting ice on any growth. Just in time for the cigar boom of the 1990’s, the embargo was lifted but the country’s ravaged infrastructure struggled to keep up. As a result, between 1991-1995, Nicaragua exported fewer than 1 million cigars to the U.S. annually. As infrastructure improved so did Nicaragua’s reputation, with brands such as La Gloria Cubana, Padron, Don Pepin, and Joya De Nicaragua trumpeting the tobacco. In the post years of the boom, Nicaraguan tobacco quickly climbed to the number three spot in cigars exported and remained there for the better part of a decade. This brings us to today where powerhouse names like AJ Fernandez, Oliva, Drew Estate, and Perdomo dominate while Fuente lays their own plans on a Nicaraguan factory.

Looking at the current market, one would think Nicaragua is the new Cuba, and many argue it is. The numbers don’t lie; Nicaragua has dominated the U.S. in imports, reviews, brands and more over the past five years. Here are some facts about Nicaraguan cigars:

What is really driving this fad? It comes down to a few key factors. First, the tobacco itself and the brands willing to work with it are a key component, shocking (sarcasm). But what drives the brands? The consumers, the average cigar smokers are demanding fuller bodies, more flavor, and strength- in other words everything Nicaraguan tobacco is known for. The demand from customers sent flocks of so-called tobacco men to plant and grow the rich leaf. As customers like yourself fuel the brands, the infrastructure improves and more brands in turn are launched. We’re now seeing a second generation of tobacco growers and farmers in Nicaragua like AJ Fernandez, Drew Estate, Aganorsa (Casa Fernandez), Jesus Fuego, and many more.

So what are these hot ticket Nicaraguans? I’m glad you asked – here is a compilation of the top ‘Nicaraguan’ and ‘Esteli’ cigars.

An outstanding Nicaraguan puro based on the award-winning Tempus line. This extension brought a new dimension of flavor with tobaccos in the same class as the 94 rated Tempus, former cigar of the year. Not enough Alec Bradley for ya? Check out their heavy and richly spicy Black Market Esteli for a double kick of Nicaraguan tobaccos.

La Gloria was one of the early adapters to Nicaraguan tobaccos, featuring the leaf in their famed Serie R and flagship label, as well as everything else in their portfolio. While the Serie R Esteli was released several years ago, the LGC Esteli is part of a new age in tobacco. With an every-day price point and a complex profile with notes like brown sugar and warm spices, this new Nicaraguan isn’t exactly from leftfield, but it’s something different for the La Gloria smokers of old.

Romeo y Julieta has been on a Nicaragua kick. While last year’s 505 Nicaragua is a fan favorite, 2018 brought the 1875 Nicaragua. With redesigned packaging and a pure Nicaraguan blend, this new-age Nicaraguan is distinctively opulent and teeming with earthy, sweet, and spicy notes from end-to-end. Available in the traditional sizes including the Bully, this is a welcome addition to the RyJ family.

The first of the top-shelf Nicaraguan expansions, Davidoff Nicaragua is a masterful cigar. From the traditionally Dominican Davidoff came a cigar by master blenders tasked on exploring a new blend that would stimulate both the bitter and sweet taste buds. After 10 years of patient curing and aging to tame the wilder tendencies of Nicaraguan tobaccos, the Davidoff Nicaragua was born- creamy smooth, complex and aromatic.

This Cuban heritage brand got a Nicaraguan makeover from Nestor Plasencia Jr. Working with Rafael Nodal, this old-school cigar was given a dash of Jalapa sweetness with a Habano wrapper and ultra-smooth Nicaraguan fillers and binder. A delectably smooth smoke that dutifully delivers hints of sweet spice, earth and wood.

Avo was another traditionally Dominican brand that broke the mold and followed Davidoff in making an ultra-premium Nicaraguan cigar- but with a bit more complexity. All box-pressed, the Avo Syncro Nicaragua teems with Nicaraguan fire and Dominican flair. The 3-nation blend strays from the puros on this list with an Ecuadorian Connecticut wrapper, Dominican binder and Nicaraguan, Dominican and Peruvian fillers. While uniquely sweet, this Avo holds a wild peppery characteristic and a deep complexity. Doubling down on the Nicaragua fad, the company also released the Avo Syncro Nicaragua Fogata in 2017.

CAO has built a name for itself by using exotic tobaccos, from the World Series to tobaccos from the deepest jungles of the Amazon River. While getting into the mix of ‘Nicaragua’ labels but staying true to their nature, Rick Rodriguez blended this new release for 2018, a merely month after releasing TAA exclusive CAO Esteli. A smooth smoke, CAO Nicaragua holds delicate creaminess, wood and spice components that represent each growing region in Nicaragua.

Though traditionally known as a Honduran powerhouse, Punch dove headfirst into the Nicaragua nomenclature with the Punch Gran Puro Nicaragua. While not entirely a puro (it has a Connecticut Broadleaf wrapper) this brightly colored cigar features a distinct fruity, woody and earthy profile that’s a favorite at the desks of Cigar Advisor.

ps the traditional ultra-premium Dominican blend. Leaving behind the Dominican Republic, Cohiba branched into the Nicaraguan scene with a proprietary blend that emboldens a Nicaraguan profile with a feisty spice and a touch of sweetness.

Yet again we see another classic brand re-invent itself with Nicaraguan nomenclature. The H. Upmann 1844 Nicaragua is brought to us by the searing hot AJ Fernandez, possibly the most in-demand manufacturer in Nicaragua right now. While rich and bold, this cigar features a plethora of caramel sweetness, cedarwood, leather and a rush of citrus and spice.

Nicaraguan cigars are the best in the world. I know l smoke them. Nicaragua beautiful country, lived there in the past. Famous for the BEST: Rum, coffee and CIGARS.