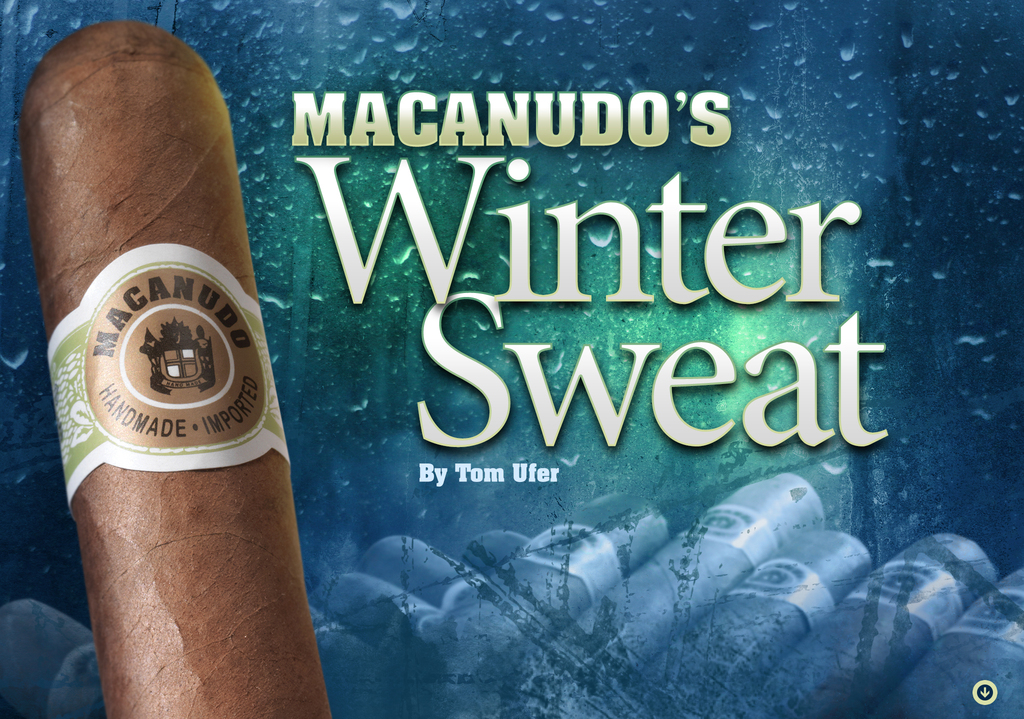 For many years, Macanudo has been one of the best selling cigars in the United States. It’s smooth, mild flavor profile makes it an easy recommendation for someone new to cigar smoking or to someone who only enjoys a cigar occasionally. Part of the reason for this consistently smooth profile is a special fermentation process Macanudo has dubbed the “Winter Sweat.”

A “normal” fermentation process consists of gathering tobacco leaves into bundles called “hands,” and piling these hands into piles or “pilones.” The weight of these stacked tobacco leaves generate heat, up to 95 to 100 degrees Fahrenheit.

The leaves are occasionally “shuffled,” around in the piles to promote an even fermentation and to regulate tempurature. This is not an exact science and takes years of experience to gain the knowledge and “feel,” for the tobacco.

This first level of fermentation begins the process of removing the ammonia smell and other impurities that are found in raw tobacco. At the end of this first phase, the tobacco is re-sorted by color, texture and type of tobacco leaf: wrapper, binder or filler. Once these leaves have been classified and re-humidified, they are once again piled up as high as six feet tall. At this height, the piles can weigh into the thousands of pounds. At this weight, the heat generated reaches 108 to 114 degrees Fahrenheit. This is the second and last fermentation phase.

Over 40 years ago, Daniel Nunez, who retired from General Cigar in 2008, developed the “Winter Sweat” fermentation process for select Connecticut shade wrapper leaves that would be used for Macanudo cigars. This process is performed in between the typical 1st and 2nd fermentaion phases.

These tobacco leaves, which are originally harvested in Connecticut in the summer and traditionally fermented in the Dominican Republic for 1 or 2 years, are shipped back to the Connecticut River Valley town of Hatfield, Massachusetts. There they are aged for approximately 8 months. The Massachusetts warehouse tempuratures drop to about 40 degrees Fahrenheit and humidity levels are approximately at 10 percent during this time. This climate pauses the fermentation and the tobacco goes into a dormant state. This drop in tempurature and the drier climate halts the buildup of ammonia and helps the tobacco release the ammonia gases that have built up. As the tempurature increases toward the end of the winter, the tobacco begins a condensation process which restores and sustains the humidity.

After this Connecticut Shade grown tobacco has rested for eight months in the New England climate, it is shipped to the Domincan Republic once again. The tobacco is re-sorted and piled into 3,000 pound bulks where it undergoes the traditional 2nd phase of fermentation. This process is what gives Macanudo its characteristic mildness and smoothness for which the brand is known. The entire fermentation process takes about 30 months. For some select wrapper leaves, Macanudo puts them through a second round of the Winter Sweat process, giving them even deeper flavor.

The Winter Sweat process is unique to Macanudo, probably due to time, labor and cost. Macanudo feels this process is important to the blend as it not only enhances the flavor content but also the aroma of the cigar. The next time you light-up and enjoy a Macanudo Cafe Connecticut wrapper blend, think about all of the time and effort that has gone into that cigar. Like most cigars, the people involved in this far-reaching process have poured their time, knowledge and passion into something that’s specifically designed to give you pleasure.

Reading Time: 8 minutes You’d heard the term puro cigars – but what exactly does that mean? Get the breakdown on what a true puro is, and the 9 top recommendations for a single country of origin smoking experience.