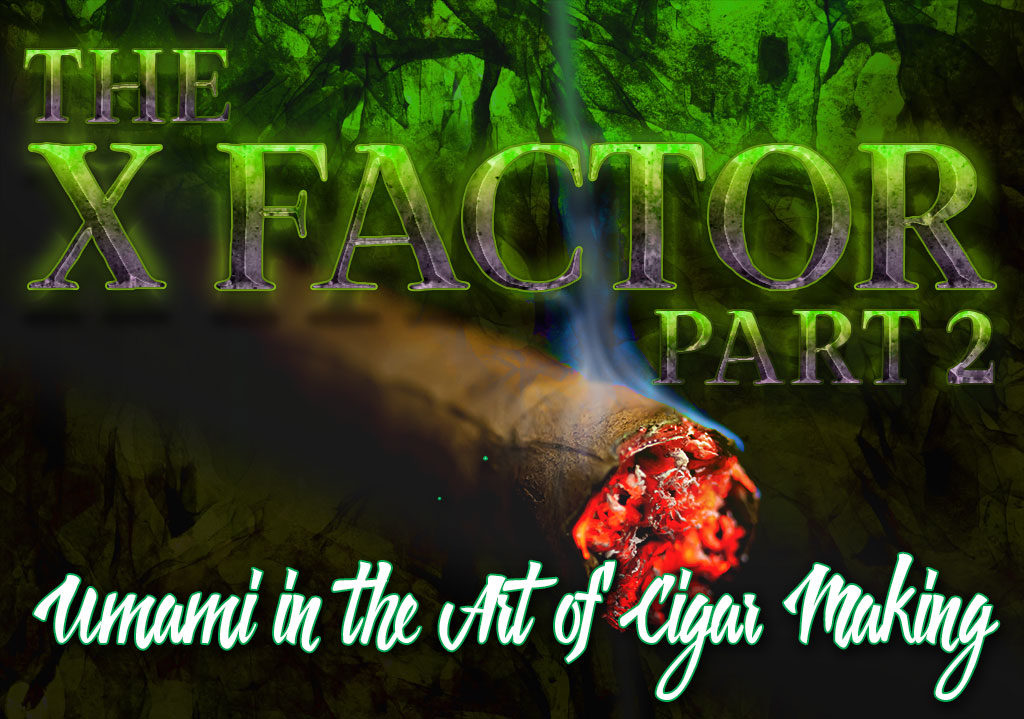 The X Factor (Part 2): Umami in the Art of Cigar Making

In The X Factor (Part1): The Soul of a Good Cigar, the concept of soul was discussed as a reason why some cigars are better than others. But what about the physical properties of tobacco? Could it be that tobacco contains glutamates, a chemical compound known to produce umami flavor?  And could it be that some cigars have more glutamates than others? This might seem like a stretch, but applying the notion of umami to cigar making can be another possible explanation as to why some cigars taste better than others. From a scientific standpoint, we could analyze tobacco for glutamates and see if its levels vary from leaf to leaf. The notion of some tobacco having a high umami “index” is not unfounded. Umami was first identified in seaweed and is considered to have some of the highest levels of glutamates. If seaweed has it, why not tobacco? Also, fermentation increases umami flavor (soy sauce has a ton of umami and, just as in cigar tobacco, is fermented). These similarities make the notion of umami and cigars very promising. After all, cigars are 100% fermented vegetable matter and the more things ferment, the more umami taste they acquire. Could this be the reason triple fermentation tastes better than traditional double fermentation.

For this hypothesis to be proven, we first need to send some cigar tobacco to the lab for analysis. If it is determined that fermentation level, seed variety, and soil composition can vary umami levels then it may be possible to tailor farming practices towards producing better tasting cigar tobacco. Taking it one step further, we could genetically engineer tobacco to produce more glutamates etc, and create a super-tobacco of exceptional flavor.

Cigars have been made and enjoyed for hundreds of years. The time-tested technique of cigar making has withstood the industrial and electronic revolution virtually unchanged.  Many of us think this is a good thing and we shouldn’t fix what isn’t broken. After all, using our senses to determine which tobacco leaf is best has always been good enough and cigars are now better than ever. But if we COULD isolate the compounds that make one cigar better than another, we could elevate cigar flavor even further and take the X out of the X factor. Anyone own a lab?

Read The X Factor (Part 1): The Soul of a Good Cigar here.

This article originally appeared on March 19. 2011, and has been reposted by permission of the author. Copyright © 2011 | Robustojoe: Online Cigar Magazine. All rights reserved.

How to Avoid “Torch Flame Overkill”