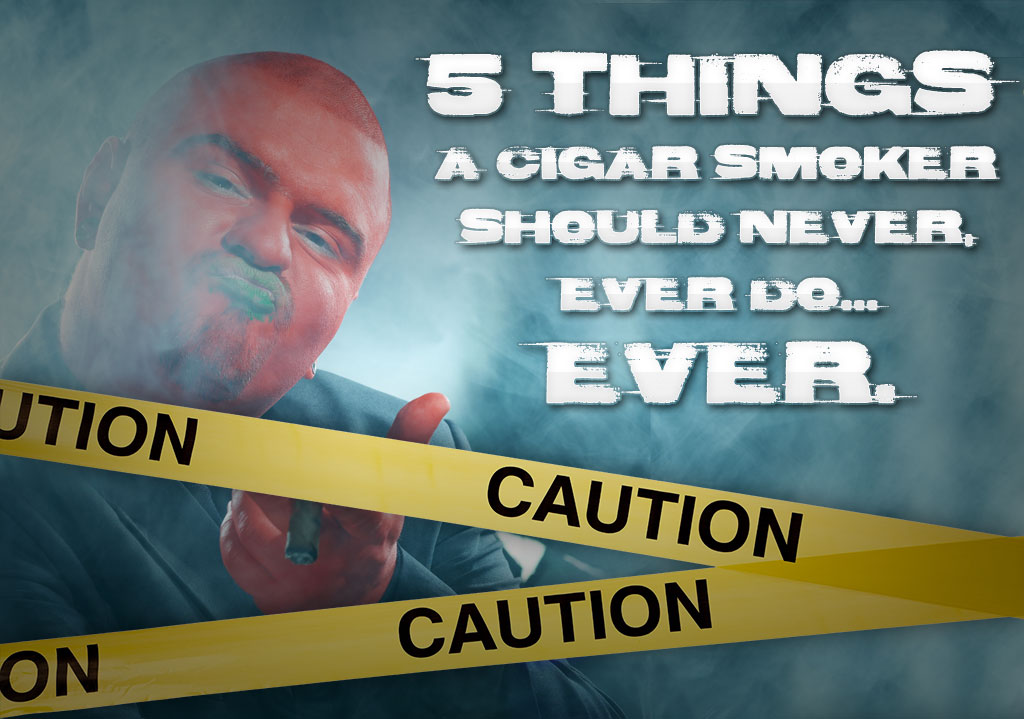 Five Things a Cigar Smoker Should Never, Ever Do…Ever.

5 Things a Cigar Smoker Should Never, Ever Do… EVER!

I generally find that cigar smokers are some of the most wonderful sorts of people who love the camaraderie of a fellow aficionado while enjoying the pleasures that life has to offer. But, in all walks of life, there are some seriously annoying goons who are about as much fun as a jockstrap made of sandpaper. Yes, there are cigar guys who commit blatant acts of ignorance and I’m here to warn you of these belligerent boners. And if you happen to be one of these turds, may the Lord have mercy on your soul.

Let’s face it, the cigar world is being pummeled and brutally attacked by the HATERS – the Smoke Nazi’s who will stop at nothing to eradicate the lifestyle we love. So, more than ever we cigar smokers need to be considerate and conscious of where we light up and who we’re around. Now let me state quite emphatically – DO NOT think that I mean we should stay silent and let the HATERS have their way – not a chance. More than ever we need to speak up for our rights that are being trampled on a daily basis. But, face it guys, we’ve got enough people hating our leaf-loving asses and being a courteous cigar smoker is just good business. Seriously, don’t be THAT guy. See my Cigar Advisor YouTube video on Cigar Etiquette addressing this very subject:

If there was an eighth deadly sin, THIS could actually be the one. I skeve out like nobody’s business, to the point where I almost hurl when I watch a guy do a Linda Lovelace on the head of his Fuente, then grab a borrowed cutter to snip it. This hygienic atrocity is an egregious act that beckons for a Sopranos-style beat down of the perpetrating dunce. Face it, you just don’t know where that guy’s mouth has been and passing on one’s pathogens is the literal definition of wrong. Bottom Line: Friends don’t let friends deep throat then snip.

We ALL know THAT guy. According to this pompous highbrow, cigars born on the island situated ninety miles south of Key West are the ONLY cigars that will ever touch his overtly pretentious lips. Don’t even attempt to tell this snoot about the tasty treasures of Nicaragua, Honduras and the Dominican Republic because he will just sneer at your ridiculous suggestions. To him, you are part of the unwashed and the uncultured as he pounds his credit card with box orders from Switzerland and Spain. Listen, there’s nothing wrong with enjoying a good stick from Habanos – you wanna pay the premo bucks, go and knock yourself out. But don’t try and convince me that Cuban cigars are the only cigars a person should smoke because you’re wrong – dead wrong. To think that this Habano blowhard has never had the pleasure of firing up a Perdomo, Padron or Liga Privada is just sad.

We all know the mighty MOOCH… the cheap-ass bastid who shows up to a herf or cigar-b-que claiming to have forgotten his precious sticks. He’s a pathetic letch and everyone knows and loathes his predictable charade. He’s well aware that cigar lovers are some of the most generous people on earth, so he preys upon their benevolence like the crocodile bird that feasts on parasites from the reptile’s generously opened jaws. He’s well aware that he’ll be offered a gaggle of premium leafy goodness so he stock piles like the heinous hoarder that he is. Oh yeah, he’ll also rummage through your fridge to find the most expensive beer and complain that you didn’t make enough burgers. So, if you are THIS guy, get it through you’re skull that you are a pariah, and make sure your insurance rider covers accidental backyard beat downs.

This inconsiderate and brazen act of stupidity is perhaps the rudest thing you could possibly do to a cigar shop owner. These hard working people are in business to make money so they can pay their bills and support their families. I can’t tell you how many times I’ve seen it go down where the owner has to walk on egg shells while politely telling these numbskulls that they need to buy something if they want to hang out… Then, to watch the idiot get insulted while threatening to leave and never come back. “GOOD, LEAVE you friggin moron,” is what I told a guy once at a friend of mine’s shop a few years back. “Would you bring your own six pack to a bar?” I threw in the clod’s face. “Would you lug a big hero sandwich into a restaurant and sit at a table for an hour or two without ordering?” RUDE! Some of you might be asking who would actually do such a thing, but trust me, they’re out there and it’s not cool, my friends.

So, there you go, five of my top things a cigar smoker should never, ever do. Hey, I’d love to read some of the cigar smoker peeves about that drive you nuts. Share ‘em in the comments below and let’s make a pact to rid the world of cigar stupidity once and for all.

Great advice… All of these have bugged me in the past…. but there is always at least one guy in every crowd…DON’T be that guy!

my buddy calls me all the time to meet at our local cigar shop and never never ever brings his own tools!!! I won’t lend him my cutter, I don’t know where it’s been! so he either borrows from the lounge bar or chews old scholarship dayz….

Absolutely dead on Tommy. And the Linda Lovelace line made me laugh out loud. I so often see and hear guys who dern near literally cram their right to smoke their cigar down everyone’s throat. It’s one of the reasons folks hate cigar smokers. Truthfully, I hate a bunch of them too. As I said in my book, Grow A Pair, you can have a pair without being a dick.

Forgot one more: Don’t dare ask for a puff of my cigar!

I guess i am lucky? Never seen any of my freinds that smoke cigars do these things!

These points are all right on! Sadly, this hometown of mine has a no smoking policy indoors anywhere except your own home! We have alot of smoke NAZI’S here! We have one really good smoke shop (for our weenie little area) but you can’t smoke inside! Even our bars have to have unattached areas to smoke! What a drag! Enjoy smoking where you can BOTL !

The guy that mashes his stick out in the ashtray annoys me to no end. Just set it down it will go out Damn You.

I wouldn’t hangout at a cigar bar or lounge without buying a cigar.

Dead on balls accurate!!! Thank you for the article!!!

Well said,I am tolerant at my shop Clearwater Cigar Company IN beautiful Clearwater Florida,some times customers bring a cigar with them to smoke, and they might have purchased it here the day before,but your rules are spot on thanks!!

I get slightly irritated when employee gives his “pick” or “suggestion”, when I’ve never seen them smoke a cigar!

Thanks to this guy guy you need to add a 6 thing never to do, don’t put words in your mouth.

Actually the worst is put it out by pushing into a ashtray like a cigarette to put it out. You dishonour the one who loved it enough to make it and put his or hers sweat blood and tears into it. Let it go out natural respecting all the hard work they put into making it. I learned that from Hamlet tabaquera. My brother.

Don’t ever put a cigar out like its a cigarette

Well to be honest I will smoke mine that have rested for months if not years in my humidor, but I will buy a few and take home to rest. Seem they smoke better after being in my humidor for a few weeks to months to get to 65/69.

Men who slobber all over the foot,clenching it between the teeth and continue to talk.
Them the sod starts spitting pieces of his soaked,tattered cigar at everything in a six foot radius. Hey… keep the foot day so you can get a decent draw for gosh sakes.
Argh.. pet peeve.

#6. Don’t be the over talker. I came to the lounge to relax and enjoy periodic conversation with everyone but not constant non stop talking from a single individual.

I admit I have smoked my own at a cigar lounge, but I was also ordering food and drink at the very least.