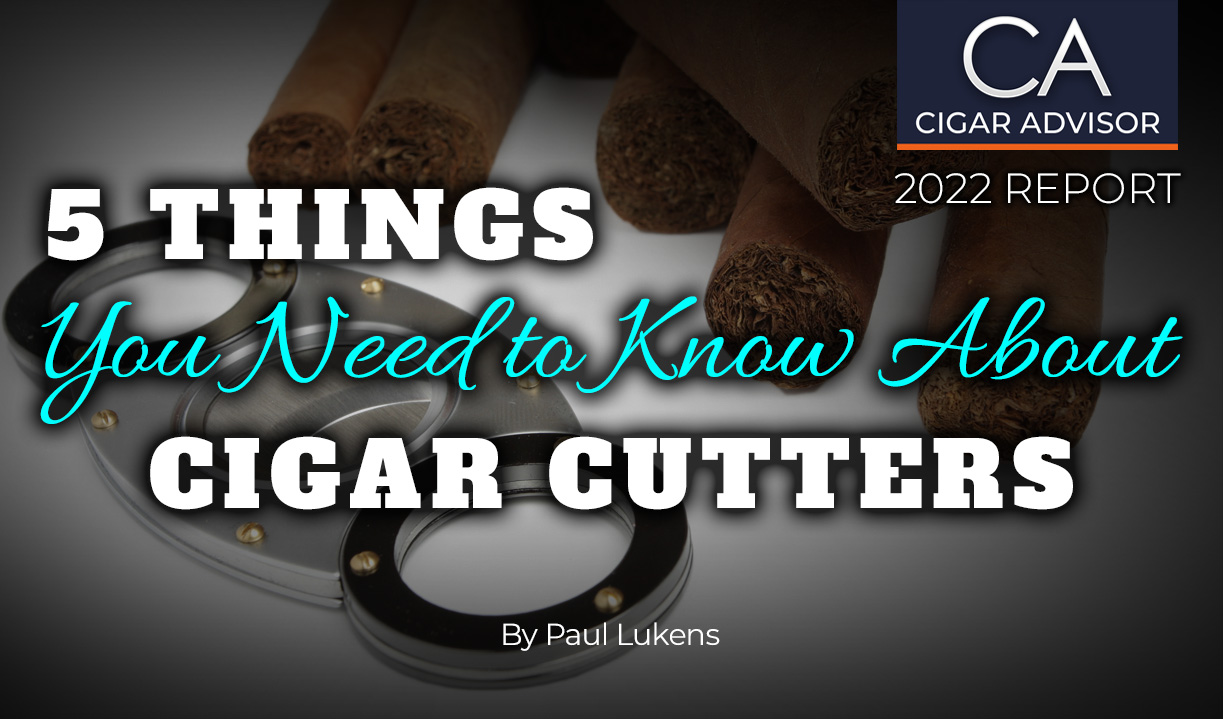 If you enjoy premium cigars—even if only now and then—you own a cigar cutter. Or have used one. And while this tool seems indispensable to today’s cigar enthusiast, this wasn’t always the case. In fact, you don’t have to look too far back into our history to find a time when it was commonplace and acceptable to bite off the cap of your cigar. Or—if you were more civilized—you might use a pocketknife, with the hopes that its blade is sharp, and your cut is true. It wasn’t until the 1870s that cigar smokers had another alternative for cutting their cigars—a device called a piercer (sometimes called a cigar perforator).

Cigar cutters have come a long way since the nineteenth century, and there are now blades in all shapes and sizes, for cigars of all shapes and sizes. While these cigar tools may seem simple, here are Five Things You Need to Know About Cigar Cutters.

#1. How you cut it will change the character of the cigar.

The straight—or guillotine—cut provides a large surface area and an open draw. It’s probably the most commonly used cut.

But have you heard of the Dickman cut? Named for former Fuente sales rep Joe Dickman who championed the technique, this is a popular choice for Torpedoes and is made using either a guillotine cutter or cigar scissors. Basically, rather than making a straight cut, cut the head at a 45-degree angle. This opens more surface area but directs the smoke towards the palate – or turn the cigar and focus the smoke towards different areas of your mouth for entirely different experiences.

Other options for cutting cigars include a punch cutter and V cutter—which is also known as a cat’s eye cutter. A lot of enthusiasts prefer a cigar punch or V cutter because they offer more concentrated flavors as you pull through the cigar.

Another cut I’ve seen is an ‘X’ cut, made with a V cutter. It’s as easy as making 2 cuts in your cigar in the shape of an X. Since it’s twice the V cut, there’s twice as much to like about it.

The proof is in the pudding, so an interesting experiment would be to take a favorite go to cigar and try cutting it various different ways and seeing if, and or how, it impacts your overall enjoyment.

#2. You’re not limited to using a cigar punch on large ring cigars anymore.

With the explosion in popularity of extra-large ring gauge cigars—like the 6×80 Asylum 13 Ogre—cutters needed to adapt to changing customer preferences. A few years ago, the only options for prepping a cigar of this size would be a large diameter cigar punch or taking a couple of passes with a guillotine cutter. We all know how that works out.

Today there are plenty of options for fans of bigger rings. Two that stand out: the XIKAR X875 cutter, which will deliver a perfect cut for jumbo cigars like the Ogre. The other is the Vertigo Big Daddy, a small-cost tool for prepping big ring smokes.

#3. The world’s most prolific cigar smoker didn’t use one.

Winston Churchill had a cigar preparation ritual, like all of us. One has to wonder how one of the most consequential human beings to have ever lived cut his cigars. His cigar consumption was legendary—said to have exceeded 250,000 throughout his lifetime—and you’d probably guess he used some fancy contraption or had some staid and stuffy ceremony. But you’d be wrong. Rather than cutting his premium cigar, Sir Winston would puncture it with the end of a wooden match, or with a piercer (the tool mentioned above). He’d then blow through the cigar from the foot to clear any loose tobacco and make sure his cigar would draw correctly.

To each their own, as they say.

Manufacturers of Swiss Army Knives—both Wenger and Victorinox—have offered multiple smoker-friendly knives, bundling essentials like cigar punches and scissors alongside their other on-board tools (called “implements” by the manufacturers). In all, there’s about eight different options for Swiss Army knives with cigar tools—and that’s including the Wenger Giant Swiss Army knife, which is the largest ever built.

Seriously, this thing is as big as a boot, features nearly 90 implements, and won’t fit in any pockets. Well, maybe Paul Bunyan’s pocket. If you want a good laugh, read some Amazon reviews of this knife.

#5. Yes, you CAN clean and sharpen cigar cutters.

If your cutter isn’t performing up to par, try to clean it first. Here are two proven methods to do it:

Many of the cigar accessories we feature at Famous, such as Lotus and Xikar, offer a lifetime warranty on their cutters – so the easy fix is to send it back to the manufacturer to sharpen or even replace the blades (they often do it for free). What to do while your cutter is out for cleaning and repair? That’s why it’s a good idea to have a few spare cigar cutters on hand.

As for sharpening your cutter, this should be viewed as a ‘break glass’ option: it’s truthfully more headache than it’s worth, and it probably voids your warranty. I suppose you could use some really course sandpaper; or, if you happen to have a Dremel with a polishing burr, a steady hand, and a can-do attitude, I suppose you could take a whack at it. But again – I really recommend activating the warranty.

If you absolutely need to sharpen – or more precisely, deburr – your cigar cutter, loosely roll a sheet of aluminum foil to a diameter slightly smaller than the cutter opening. Stick it through and give that “foil cigar” a couple of quick cuts to smooth out your blade’s rough edges and extend its life, if even for just a few more cigars.

You lack the cigar knife from http://www.lesfineslames.com in this review ^^

I like the punch cut for the go-to cut. I find it classier as compared to having to cover the large ring guages to make a good draw.

i prefer a punch, (i keep several sizes) to start with, if it doesn’t draw easily i can always chop it with the scissors or guillotine.

For about three years now, I’ve been using what is called a “perfect cutter”. I got mine from a company in Miami, and I think they hold the patent on them, but I’m not sure. Anyway, since I’ve been using it, I’ve never had a bad cut … NEVER !!! Mine is made of titanium but they come in stainless steel as well, it doesn’t rust, is self-sharpening and because of it’s design, it cuts exactly the right amount off the head without damaging the cap. Now I only use a traditional cutter when I am on the road and don’t want to take my perfect cutter with me. The stainless steel version costs about $7 or $8 — worth every penny !!!

PS: They are warranted for life. And by the way, a mullet is a fish !!!

I’ve been using a Xicar 75 to cut my Asylum 13 Ogre 80 ring cigars and found it very satisfactory. It gives an excellent open draw which allows the full flavour to come through. It’s hard to find 3 hours of leisure to enjoy these cigars, but worth the effort. If I could find the time, I wouldn’t smoke anything else. This cutter was bought in Australia and retails at an astonishingly expensive $49.95 (smoking cigars in Australia is a wealth hazzard). What can you do? You need the right tools.

I have been using an unprimed 22-250 rifle casing to punch my cigars for many years now and love it. The hole is about the same as a manufactored bullet punch but being a hunter/shooter i always have a few shell casings laying around. I use a drimal tool to sharpen the brass hole with ease. If it gets dull I just hit it with the drimal again. Cleaning out the punch is a snap as I use a piece of heavy copper wire to push the tobacco out from the primer hole. The old saying “Necessity is the Mother of invention” is true. I found myself in the woods with no cutter, siccors or anyting to clip the end of my cigar. Not being one to “bite” off the cap I pulled a spent shell out of my ammo bag and used the hole to succesfully punch a hole in the cap/ I have not used my store bought cutters again. I even have one engraved with my name on the side of the casing.

the v-cut gives you ample exposure for a good draw and it keeps the filler away from your tongue.