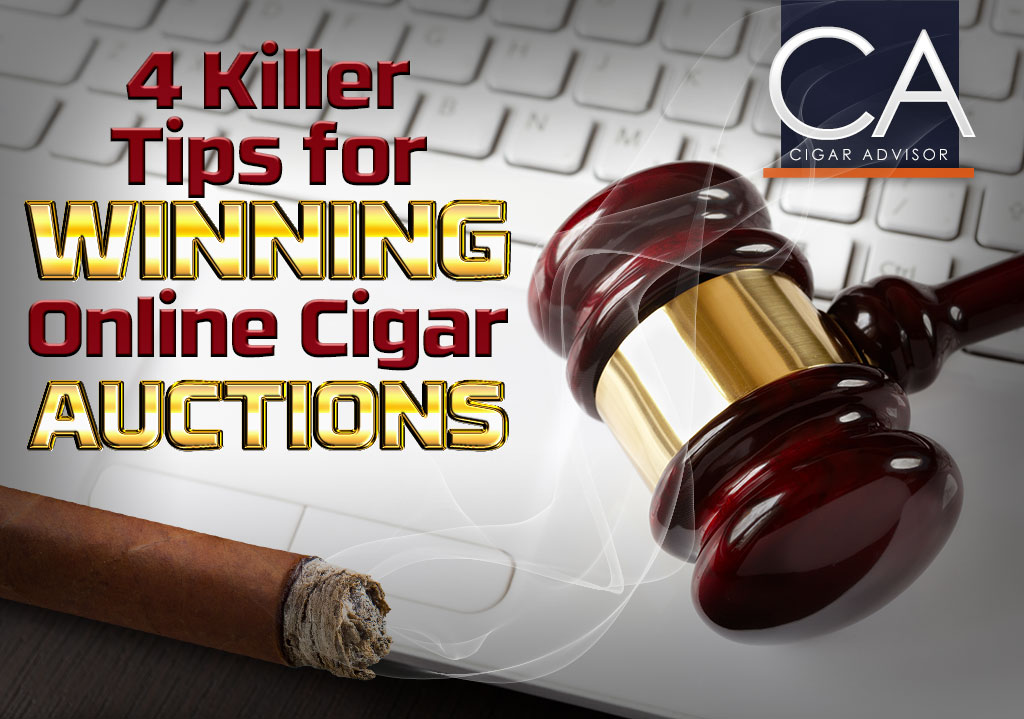 Many Cigar Smokers Are Discovering Better Deals on Auction Websites

They say there’s more than one way to skin a cat. There’s also more than one way for cigar smokers to get the best cigar deals on the products they love, and in some cases, even lower than on-sale prices. How? By bidding for them on a cigar auctions website. If you’ve never bought cigars on an auction site and like the thrill of competition, it can be pretty exciting, especially when you win. There’s nothing like when those tense final seconds begin counting down and you’re in the lead. And when you win your first auction, it’s as thrilling as winning the Daily Double at the racetrack with a long shot. Of course, good timing and a little luck helps.

For starters, and a little “inside baseball” on cigar auction sites, I spoke to Bethany Bastinelli, Merchandiser for CigarAuctioneer.com. 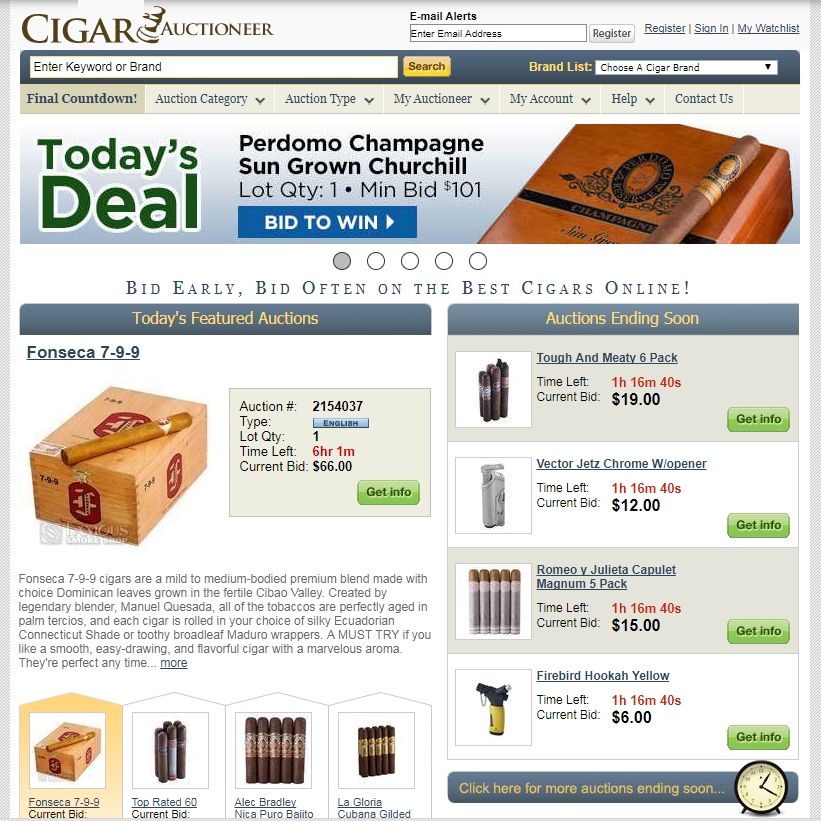 “You can find some unique, limited-edition items as well as great deals on some unexpected products like rare cigars and certain cigars that tend to sellout quickly on retail cigar websites,” says Bethany. And when asked how she decides what items to feature on the auction site?

“I use multiple criteria based on reports for limited-quantity cigars, overstock cigars, and heavily sought-after cigars.” But not all of the lots are made-up of the finest and rarest.

“Most of the items are cigars you’ll find in most online cigar stores, and that includes machine-made cigars,” added Bethany. “The advantage to auction buyers are the low starting bids, which, if they’re lucky, can save them a lot of money.”

Opening bids on CigarAuctioneer.com can start as low at $1, whereas hard to get brands like Opus X cigars tend to start much higher. However, most opening bids are realistically priced.

“I try to be both competitive and appealing when deciding where to start the bidding for a given item,” said Bethany. “I’ll also include some hidden ‘Easter eggs’ on the site, but ultimately, we’re running a business and lucrative margins have to be considered for the site to remain profitable.”

It seems to be working, too – CigarAuctioneer has seen a significant increase in consumer traffic.

So, what’s the most challenging part of merchandising a successful cigar auction site?

“Trying to have a good variety of products and appealing pricing while not being too predictable,” said Bethany.

The main reason for playing cigar auctions is to get the cigars you want at the lowest price possible, which is very doable as long as you: 1) know what you want; 2) have the patience to sit-out the auction; and 3) practice good timing.

So now you’ve registered with a cigar auction site, chosen a lot and placed your first bid. The thrill of competition is coursing through your veins. But the auction ends in 5 hours, so what do you do in the meantime? You can hope you’re the only bidder (and though it’s rare, sometimes you will be), or wait until you get an “outbid notification” and take it from there. You also have another option. . .

You’ve started to bid on an auction, but you don’t want to keep tabs on it every minute. For that situation, CigarAuctioneer.com has an “Autobid,” feature. This allows you to bid as much as you’re willing to pay for the lot above the current bid without having to keep a constant watch on it.

Here’s how it works:

Let’s say you’re interested in a box of Herrera Estelí Norteño Toro. The bidding starts at $40 with a $1 bid increment and you’re willing to pay up to $65 for the box. If so, enter $65 in the bid field. Your current bid will still go in at $40 and you will remain the current winner until someone places a bid of $66 or higher. Remember, they may be using Autobid, too, so if you place a bid and someone else is using Autobid, the page will refresh and alert you that you’ve been outbid. You can keep going until you outbid them, or bailout if their Autobid is more than you’re willing to pay.

Autobid can work to your advantage on a lot of auctions. In the above example, if no one had outbid you by the time the auction ended, you’d win the box of Norteño Toro for $40! Just remember that the hotter the item, the more competition you’re going to have. (Note that Autobid can only be used for English auctions.)

Once you’ve begun bidding, keep an eye on the time the auction ends. It could be an hour away or a couple of days. If the auction is hot, there will be a lot of bidding, so you want to make sure you’re in the mix during the final minutes. Keep in mind that some auctions end at times when you may be offline. To keep you apprised of your status, CigarAuctioneer immediately sends you an outbid notification email as soon as you’ve been outbid:

If the new bid is higher than you’re willing to pay at that point, let it go and either look for another lot, or wait until that lot comes around again. Remember, you can play as many auctions at a time as you want.

As far as tactics and strategy goes, your options are somewhat limited, but here are some things I’ve observed during play.

Some bidders only like to play auctions that are ending sooner than later. For this type of play, Cigar Auctioneer has a “FINAL COUNTDOWN!” page showing all of the auctions ending within the current hour.

If you don’t see anything of interest, click the “My Watchlist” tab (presuming you’ve already added your favorites), to see what else is cooking, or use the Brand List at the top of the page to search for a specific brand that you like.

Some cigar auctions may be ending as far out as one to several days, so unless you’re 99.9% certain your bid will be the highest, you may want to wait until the auction is closer to ending.

In fact, many players will wait until the last 5 or 10 minutes to bid on a lot. A good tactic, but you may have to set an alert on your phone to remind you. On Cigar Auctioneer.com, if someone places a bid within the last 2 minutes the time will extend for an additional 5-minute grace period. Bidders only get one shot at this, since bids made within the last two minutes during the grace period will not extend the auction a second time.

If you play often enough, look for patterns. Certain lots will be in more or less demand than others. If you happen to like a particular cigar that doesn’t get a lot of play, be sure to add it to your Watchlist. You definitely improve your odds when it’s a cigar that you like more than anyone else.

Another tactic is to play auctions that either end late at night when other bidders may not be paying much attention, or on major holidays like Christmas, Labor Day, and July 4th, when most people are preoccupied with family and friends.

As you play more auctions, you’ll eventually develop your own tactics and strategies for winning.

It’s often hard to resist seeing so many great deals staring you in the face at once, which can bring out your inner gambler. But even if you’re not the gambling-type, it’s fun to try your luck at winning cigar auctions.

If you’re an experienced cigar auction buyer, and have something to add to this post, please leave a comment.

Great article Gary. I never knew on-line auctions existed for cigars. I will definitely be giving it a try

I like that you said that in order to get what you bid for is always good to keep the time on record. Someone told me that bidding at the last second gives you a greater chance of winning. Thank you for helping me learn more ways to bid at the right time.

Reading Time: 7 minutes Need a cigar cutter, but need to cut costs? Here are our 7 top picks for quality cigar cutters under $20 – along with a bonus tip on how to use each one.