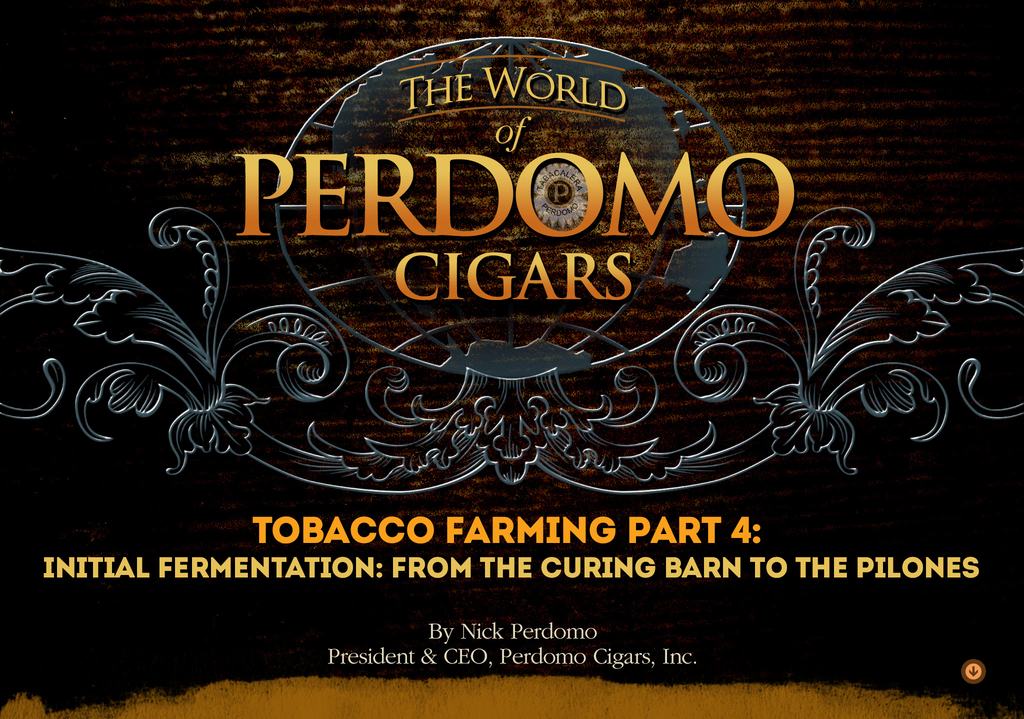 Tobacco Farming is as much a science, as it is a process, to Nick Perdomo.

Once they arrive at the curing barn the leaves are sewn, tied, and then hung on eucalyptus sticks to dry from 45 to 65 days. Each stick holds 144 leaves. During that time period they’ll release their chlorophyll and seal their colors which will prepare them for the first fermentation process.

After we hang the tobaccos, the most important time period for us are the first 12 to 14 days. That’s the period where the colors are sealed-in as the leaves begin to wilt and start taking on a more yellowish hue. We line our curing barns with visqueen, a polyethylene plastic sheeting that helps maintain humidity, preventing it from dissipating easily through the walls of the barn. For the first 20 days we keep the barns at 75% humidity. If the humidity rises above 75 %, we make a charcoal fire on the floor of the barn. The heat from the fire helps dry the air and bring the relative ambient humidity back down to a 75% level. During this period, we have technicians checking the central veins of the leaves to make sure they’re drying evenly, as well as making sure there is no mold forming around the leaves.

The Sealing of Colors

One of the ways we control the environment in the curing barns at our tobacco farming operation is the direction in which they are built. Our barns face North and South, because the prevailing winds in Estelí normally tend to blow from East to West. We open the barn door windows when necessary in order to maintain the proper humidity and keep a consistent airflow. Though they need a regulated amount of humidity, the leaves also need a certain amount of air flow to help prevent the leaves from acquiring mold. Colors are very important to us, too; not just because we can use them for wrappers, but to keep everything as consistent as possible. That’s why our motto is to treat every leaf as though it was a wrapper leaf. When you look at the leaves that have been drying longer, you notice they are more brownish and red in color. As the leaves continue to cure, the colors will darken and parallel throughout the leaf. Each leaf will then later be classified by size, texture, and quality.

After the leaves have completed their 45-65 day drying period they’re ready to go through the first fermentation process. We move the leaves to our pre-industry area where the leaves are classified, weighed, and tied into “hands” of 35 leaves each. Because the central vein line in each leaf still has moisture in it, we build piles called pilones, which are essentially compost heaps. We do this because, biochemically, the tobacco processes itself under pressure, while at the same time allows any excess moisture to dissipate.

As the tobacco ferments, it heats up in the pilon. This heat has to be carefully controlled and monitored, so we have temperature gauges that we place in each pilon. During this initial stage of fermentation, we want the temperature to reach about 110 to 115 degrees. When a pilon reaches its optimal temperature, we must “turn it” so that it does not overheat. We shake the tobacco out, to aerate and cool it down. This is done simply by picking up each hand of tobacco and literally shaking them for a few seconds. After each hand is shaken we begin building another pilon. The top leaves from the first pilon will now go to the bottom of the new one; the bottom leaves will go to the top, while the center leaves will go out and the outer leaves will go in. That is called a “complete rotation,” and it’s done this way so all of the tobacco is fermented as uniformly as possible.

You may have heard the expression, “we listen to the tobacco,” and that’s really what we do. By monitoring the temperature inside the pilon, the tobacco tells us when it’s ready to turn. This isn’t something you can do just randomly. We’ll turn each pilon as many times as it takes to ferment it properly. The first fermentation process is complete when the temperature of the pilon maintains its required temperature for a certain period of time without increasing. At this point, we move to the second fermentation period.

To start the second fermentation process, the pilon must be broken down and the tobacco receives its first watering using clean, natural water. Remember I told you that we use both traditional methods and modern technology? This watering process, which is done using a sprinkler system, falls under the traditional category. This process has been used for more than 100 years of tobacco farming, and I believe it’s still the best system for preparing tobacco during fermentation.

During the watering process, each hand of tobacco is sprayed with a very fine, cloud-like mist of water. To do this properly, the worker spreads the hand open like a flower, and then wets the leaves turning the bunch in a 360-degree radius under the mist. He then turns the hand over to wet the tail section where the leaves are tied. This ensures that the entire hand is wet inside and out.

After each hand has been watered, another worker carefully shakes the tobacco making sure that there are no heavy droplets of water, which could stain the tobacco. All that should be left is a thin film of water on each leaf, making it moist and supple. After 10 hands are completed, they are tied together and placed in a room standing on the tail end. Once the entire pilon has undergone this watering process it will be aerated for 12 to 14 hours. This rest period is critical as it allows some of the moisture to dissipate before reconstructing the pilon and starting the second fermentation process.

This is the phase where the tobacco really begins to take-off, and that’s where we’ll pick it up next month.

[…] article, we are going to specifically focus on what needs to be done in order to make sure that the tobacco pilon that has been harvested is able to go through the first fermentation process during which time […]