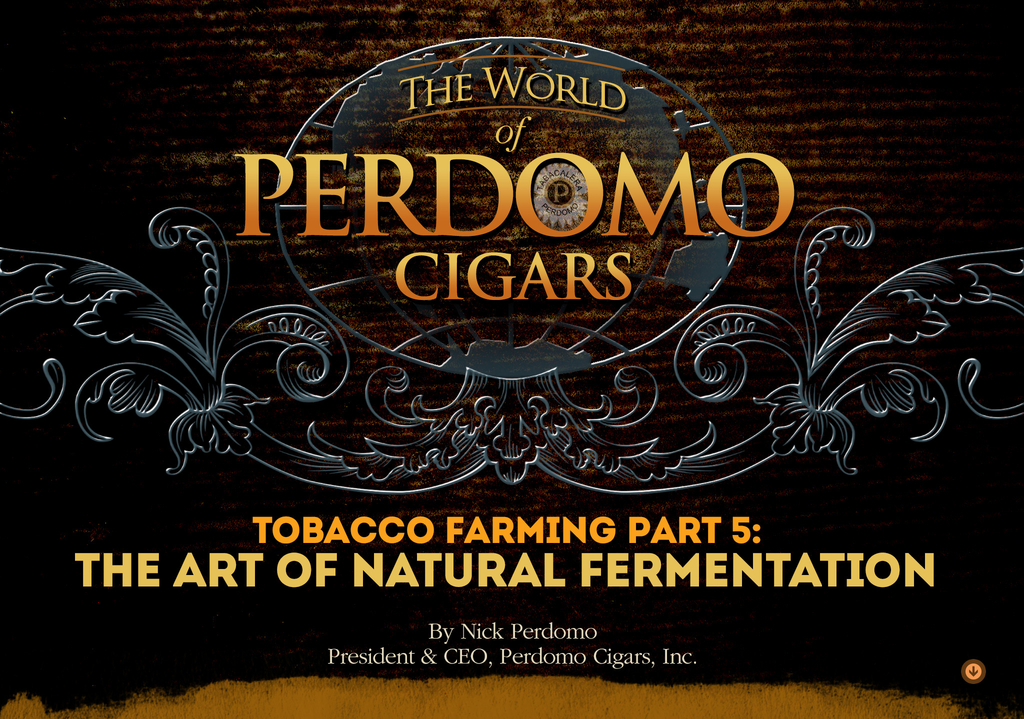 Last month, I told you how we separated and hung the tobaccos in our curing barns, bound them into hands, and constructed the pilons for their first fermentation. In this chapter, we’ll move on to the next stage where we slowly ferment the tobaccos using a process called “natural fermentation.”

After the pilon has undergone the live, natural watering and aeration process, the tobaccos must rest for 12 to 14 hours. If the tobacco leaves in a given pilon are thicker, it could take up to 24 hours until they’re ready. During this time period, the natural water we sprayed on the tobacco should have dissipated to the point where we can begin rebuilding the pilon for the next fermentation process.

For this round, the tobaccos are carefully placed in the pilon so that they ferment equally. Plus, as a result of the natural watering now in the leaves, the acceleration rate of the fermentation starts working biochemically along with the free radicals that cause the tobaccos to heat up. Here again, the leaves are turned periodically when the temperature reaches between 110 and 115 degrees. We shake them out once again, reconstruct the pilon and the tobacco continues to ferment. These procedures are done repeatedly until we feel the tobacco has been completely fermented to our satisfaction.

As for the tobaccos that have been fermenting the longest, they are continually inspected for texture and color, as well as for some other attributes.

The Secrets To Working With Tobacco Are On Your Body

My father used to tell me, “The three biggest secrets to working with tobacco is the keen use of your hands, nose and eyes.” You want to literally feel the tobacco with your fingers. If it feels tacky, it needs more fermentation because the resins haven’t yet broken down in the cellular structure of the leaf. These oils and resins are what help produce the tobaccos’ flavor. The second thing we do is smell the tobacco for aroma. What we want is a nice, sweet, complex bouquet. We’re looking for tobaccos that are going to produce a lot of complexity and flavor. We’re also looking for the nice sealing of colors since some leaves will be used for wrappers, others for filler, binder, etc.

We Do It Our Way

The way we ferment tobacco is quite different from how it’s done in other processes. Some fermentation rooms use space heaters and water to accelerate fermentation. We don’t do that. The reason is, biochemically, when it’s being processed naturally, the tobacco tells you when it’s ready. The cellular structure of tobacco contains proteins, sugars and carbohydrates. As the heat builds and the free radicals get going, the bacteria begin to dissipate. However, if you try to artificially rush the fermentation, the bad bacteria will adhere itself to the tobacco and you get that brash flavor you taste in some cigars. We want to have smooth, bitter-free tasting tobacco that has complexity, flavor, aroma, and a bouquet that you can really appreciate. The best way to do that is by naturally fermenting the tobacco. We will keep the tobaccos fermenting as long as it takes to achieve the specific smoothness, complexity, and flavor we want.

On top of every pilon is a cardboard folder. Inside the folder is what we call the “clinical paper,” which helps us keep track of all the tobacco we’re fermenting. Like the hospital chart doctors and nurses use for each patient, the clinical paper tells us everything we need to know about the tobacco on that particular pilon. It has the number of the pilon, on what farm the tobacco was grown, the date the pilon was initially constructed, the year of the crop, the variety of seed that was used, what cut or primings were taken from the plant, the classification of the tobacco, and the weight of the pilon, which can run upwards of one-and-a-half tons, or more.

We’re fortunate that we have a lot of fully-fermented, baled tobacco on-hand. By having such a massive inventory we can take as long as we need to ferment each pilon to the peak of flavor; so there’s no need to rush anything. This slow, natural fermentation process is how it was done in Cuba before 1959, and it’s the only way it should be done.

Additionally, because we can continue to ferment the tobacco in their bales, this allows the flavors to marry as one. The bales are aged between three to six years depending on the type of tobacco. We have some ligero that’s been pilon fermented for as long as three years, then bale fermented for another three years, or more. This is the way it’s supposed to be done, so the tobacco will be ultra-smooth with no trace of bitterness when the cigars are rolled.

After fermentation, we test the tobacco for combustion and flavor. We take some of the fermented leaves, strip them, dry them, and roll them into cigars to make sure the tobaccos have the flavor characteristics we’re looking for in the fillers, binders, and wrappers prior to the baling process.

What we look at first is combustibility; how well does the tobacco is burn?; does it do so without creating a border line?, etc. Each tobacco leaf, be it Seco, Viso, or Ligero, has its own unique flavor characteristics, which is also why each type of leaf is fermented for different lengths of time. If you fermented all of the tobaccos for the same amount of time, some would be over-fermented, which is what gives you that grassy taste, while others would be under-fermented, and that’s just not acceptable.

By taking leaves from the different growing regions, blending them and test smoking them, we get a good forecast of how the leaves will taste and perform after they’ve been baled. Each bale is made not only by texture, width, and size, but also by the farm from which it came, because each farm produces tobacco with a different flavor. As a result, we’re testing all the Seco, Viso, and Ligero from each farm respectively.

Aristides, our head tobacco technician, is constantly making test cigars during this process. Sometimes he’ll make a cigar with different tobaccos, or he’ll make one that’s all Seco from Jalapa, all Viso from Condega, or all Ligero from Estelí, for example. Sometimes, he’ll make up some test cigars using different tobaccos from different regions to see how well they blend. It’s the only way to really know what you’re going to be working with once the leaves are ready to be made into cigars.

Aristides, who’s been smoking cigars and working with tobacco since he was 14, knows exactly what properties to look for in each type of tobacco. On more than one occasion he’s told me that we have the most thoroughly fermented and well-tested tobacco he’s ever worked with, even during all the years he worked in Cuba. When Aristides visits his family in Cuba he’ll smoke Cuban cigars, and says there’s “no comparison” to the quality and flavor of Nicaraguan leaf (at least the way that we do it). My late father felt this way about Nicaraguan tobacco, too. All I can add is he would be very proud of what we’re doing today.

Next month: Checking the different types of tobaccos by grade and selection before they’re stripped and baled.

[…] It appears to be thicker than the Cameroon used in other cigars, but I’ll strike that up to the fermentation and aging process. For me, the smoke seemed to issue more body and […]