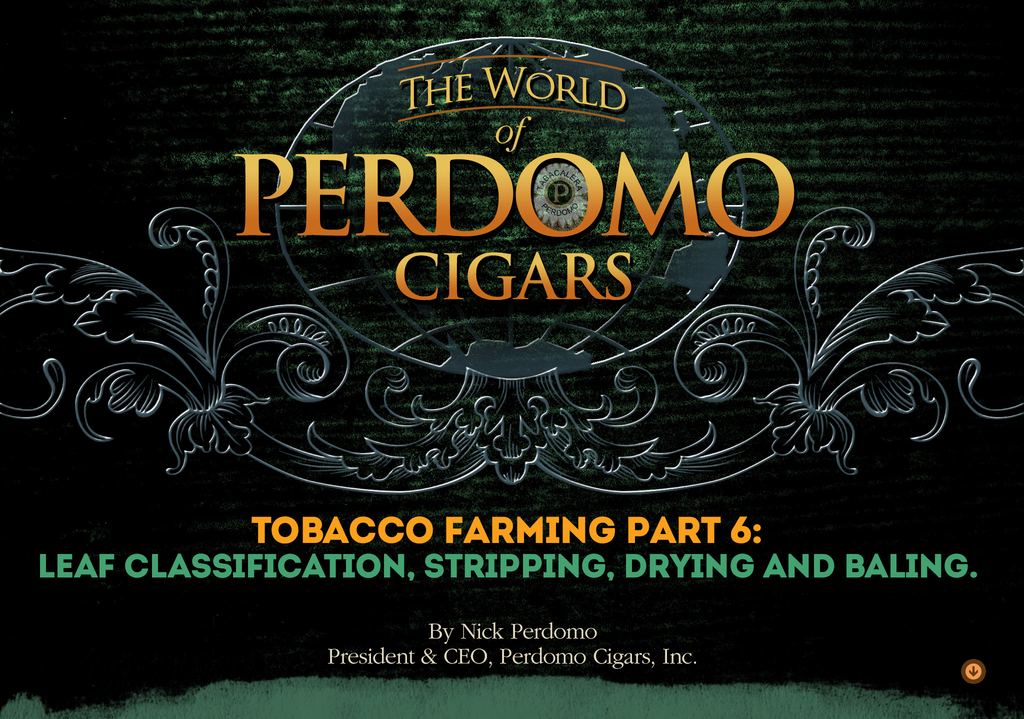 Last month, I described how we slowly ferment the tobacco leaves in the pilones, and how the leaves are continuously tested for combustion and flavor by rolling them into cigars. This month we’ll focus on how the tobacco is graded, classified, selected, and stripped before baling.

We classify the tobaccos in each region first by the TYPE of leaf: Seco, Viso, and Ligero. Then we separate each type of leaf by its SIZE as a small (pequeño), medium (mediano), and large (grande). After we classify the leaves by size we then grade them in terms of their QUALITY as A (perfect), A- (a minor flaw), B (a hole or tear) and C (lots of holes). We use this highly-detailed form of classification in order to ensure our cigars are blended consistently guaranteeing great flavor profiles year after year.

Additionally, each classification, including the origin of the leaf, has its own unique flavor and aroma characteristics. For instance, Seco grande from Jalapa will have a much different flavor profile than Seco grande from Estelí. The Seco from Jalapa is sweeter and more aromatic than the Seco grown in Estelí and has excellent combustion properties. Viso from Jalapa is a medium strength leaf. Though it has a richer flavor and aroma than Seco, Viso from Estelí will be even more flavorful. Suffice it to say, Estelí produces tobaccos that are much thicker and heavier in both flavor and body.

Remember how I explained the difference in the soils among the different regions? It is during this classification stage that you can actually taste and smell how the soil and climate affects these different tobaccos. Take Ligero from Jalapa, for example. It has a nice honey-like, almost molasses aroma, but doesn’t have the strength characteristics of Ligero grown in Estelí. Because Jalapa Ligero has that great aroma and natural sweetness, it blends beautifully with Ligero from Estelí, which makes for a great combination of blends. Additionally, when you look at the characteristics of Estelí Ligero, you notice immediately how much thicker the leaves are, making this a real powerhouse of a leaf.

After the filler leaves have been classified, we go through the same classification process with the binder and wrapper leaves. Once again, we test the tobacco at this classification stage, which gives us an even clearer indication of what we can expect when we are ready to blend the cigars. If you like a combination of strength and complexity, a blend of well-fermented Secos, Visos and Ligeros from the different regions of Nicaragua will definitely satisfy your palate.

Because the leaves are sorted by size, if I’m going to make a 5″ Robusto, I’m not going to use an 8″ leaf, since almost half of it would be wasted. Remember that when you smoke a premium handmade cigar you’re smoking the entire leaf.

The tips of the tobacco have the most concentration of flavor, so when we make the cigar the tips are placed at the foot of the cigar. When you light the cigar you’re tasting the tips and the cigar all the way through. The result is a cigar that’s consistent in flavor from beginning-to-end. If you’ve ever smoked a cigar that takes a few minutes before you begin to taste its flavor, that’s because the cigar was not constructed properly, and you’re not getting the full flavor of the leaf from start to finish.

This technique that we use is very effective because it also speaks to quality control. Even more importantly, we specifically choose the size of the leaf that matches the size of the cigar we’re making. A Double Corona, Torpedo, Churchill, Gordo, etc. would be made with larger leaves, because those shapes are longer and require much more material. So, whether you’re smoking a 5″ x 50 or a 6″ x 60, the flavor is going to be consistent all the way through. And that’s the key. If you’re smoking a full-flavored cigar like our Perdomo Habano, you want it to have the same flavor all the way through regardless of its size.

After we’ve classified the filler leaves, it’s time for stripping the veins. We start with what we call a “frog strip.” We literally strip the central vein down the middle at about 50 % of the leaf, so when the roller gets the tobacco it’s much more pliable and the bunch remains straight. The thing we don’t want is this thick central vein of the leaf rolled into the cigar. For one, you’ll feel it, and two, it can make the cigar taste bitter, but we keep 50% of the vein so the structure of the leaf stays whole. If we didn’t, the tobacco would be more likely to rip or tear during rolling. We have several hundred people doing this and this is a very important aspect of the process before the tobacco is baled and eventually made into cigars. This way, we have a full, long leaf when you smoke the cigar.

Once all of the filler leaves have been stripped we will classify them again by width, size, and texture, then weigh the tobacco again. After they’ve been weighed, the tobaccos are moved to a drying room where they’ll be dried naturally. Before we bale, the goal is to get the moisture content in the fillers down to around 14%, which is about 70% humidity. Each bale will weigh anywhere from 120 to 125 pounds. Each type of tobacco is baled separately, too; not only under its classification as a Seco, Viso, or Ligero, but also by the region it came from, and more specifically, the farm on which it was grown.

After the tobaccos have been de-veined, sorted and classified we move them into our drying rooms where they are separated into small stacks on large trays. We use a high-dry system that helps evaporate the water at a slow pace. Each type of tobacco also dries at a different rate. Secos, the thinnest tobaccos, take anywhere from three to four hours; Visos, which are slightly thicker, take five to six hours, and Ligeros, the thickest leaves, can take anywhere from seven to 10 hours to dry.

After the tobaccos have been dried they are placed in large cedar boxes; each box holds roughly 125 pounds. We put an identification card in the box that tells us the classification and grade of the tobacco, the pilon it’s from, the priming, the seed used, and even the farm and region it came from.

In the old days, the only way we knew if the tobacco was ready to be baled was by taking your finger and pushing down on the main vein until it felt like it was ready to snap. Here again is where technology steps in. Today we use digital psychrometers to measure the exact moisture level in each leaf, which guarantees that when the leaves are baled they will have that 14% moisture content. The importance of having the right moisture content is that we want the tobaccos to be just pliable enough to bale. The correct moisture level also ensures the tobacco will continue to marry and age under pressure in their bales.

To make bales, the boxes of perfectly dried tobaccos are placed under an hydraulic press that can produce up to 1,200 pounds of pressure and will convert the125 pounds of tobacco into a bale. We only use 900 pounds of pressure; reason being, we don’t want to crack any of the leaves. To see how the bales are made, click the icon and watch the video.

Once the bales are completed, we move them to the bale aging room, or what we call “the bank.” The room is climate controlled at 68% humidity, and we have about 50,000 sq. feet of space where we store thousands of bales. Additionally, all of the tobacco is classified in each of its stages, and because we are able to store so much of it, we always have a continual, well-aged flow of tobaccos, which also guarantees consistency in each and every one of our blends.

Next month: How we ferment wrapper leaf, plus the production phase, including rolling, and draw testing.

Reading Time: 4 minutes Gary hooks a big one: this week he’s #nowsmoking the Gigante for his La Gloria Cubana Spanish Press cigar review. Not usually a smoker of big ring cigars, his thoughts on this 6″ x 60 may surprise you. . .