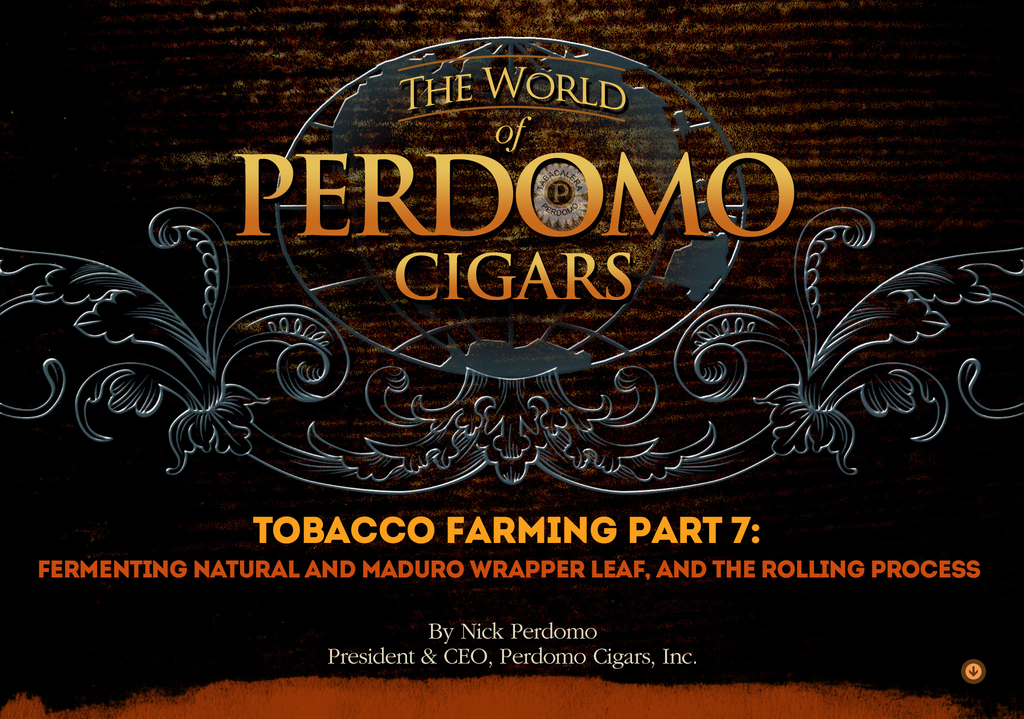 Last month, we focused on how the tobaccos are graded, classified, selected, and stripped before bale aging. Those tobaccos were primarily filler and binder leaves. This month I’ll describe how we ferment wrapper leaf. And just like we doing everything at Perdomo Cigars, we go the traditional route to achieve a leaf that’s superior in quality, flavor and consistency.

Now that you’ve seen how we ferment and age the filler and binder leaves, I want to move on to one of the most important processes of fermenting wrapper leaves. Once again I turn to Aristides, who, in addition to all his other skills, is also one of the best wrapper fermentation men in the business. The wrapper leaves are stored in a casillero, (ca-si-yehr-oh), which is Spanish for “locker,” or simply, a “big box.” Nine feet long by six feet high, each casillero is covered by a drape of heavy burlap and plastic.

The wrapper leaves are fermented in hands, and constantly inspected. Let’s take Jalapa-grown Corojo, for example. First we want to check the colors, so, we remove a hand at random. As we inspect each leaf, we’re looking for a nice reddish-brown hue. That tells us the tobacco is fermenting properly, and will be ready soon. I leave that determination to Aristides. He instinctively knows how much longer it will take for the wrappers to achieve that beautiful chocolately-brown color we ultimately want.

We use the very same fermentation method that Aristides used back in Cuba. Yet, here’s the difference between how we ferment the tripa or filler leaves, and the wrappers leaves, or capas. The wrapper leaf has to be stored in an almost hermetically sealed environment where there is barely any oxygen (unless we decide to put some in), so the wrapper ferments extremely well in a completely protected environment. In other words, the less air the leaf is exposed to, the better color, flavor, and aroma.

When we select the leaves for our Sun Grown wrappers, we have to ferment them very slowly and without much pressure, because we don’t want to stain or bruise any of the leaves. Aristides likes to ferment this wrapper from 80 to 90-degrees Fahrenheit, which, if you remember, is much lower than the fermentation temperature we use for the fillers. As Aristides inspects the wrapper for color, he also smells it, and he knows exactly what aroma he’s looking for, too. Should the temperature ever reach 100-degrees, we must quickly break down the pilon and rework it. As we inspect the wrapper, we’re looking for that chocolate red-brown color. This process, which is also the final wrapper fermentation, is an extra step we take to ensure the wrapper is fermented to our high standards.

It’s important to know how well the tobacco is doing at various stages of fermentation by rolling test cigars from the leaves. So, as we did with our filler l leaves last month, we do the same with our wrapper leaf. We also choose a thick, leathery leaf for this test because it’s harder to burn. So, if the leaf burns well, even at this thickness, we know it will burn perfectly when you smoke the cigar. To do this, Aristides will tear-off about an inch-wide strip, just enough to over wrap the cigar he’s smoking. As you can see in the video clip, the leaf is burning well, or as Aristides says, “It’s burning white as a coconut,” which, along with its flavor, strength and aroma, tells him that in about 10 days this tobacco is going to make an excellent wrapper.

The “Dark Side:” Fermenting Maduro Wrapper

In addition to fermenting “natural” wrapper leaf, we have our own way of fermenting Maduro wrapper. Our maduro wrapper has a lot of flavor and natural sweetness. Since Maduro wrapper, or as we call it in Spanish, Capa Negra, is bigger and thicker we ferment it at 110 to 115 degrees Fahrenheit. Being a Maduro lover, what I love about the Cuban seed Maduro we produce is how rich it tastes and that natural, chocolately sweetness that comes through. It takes a lot longer to go about fermenting wrapper leaves Maduro, but it’s well worth the effort. We will also continue to roll test cigars until the wrapper is ready to be taken to the rolling room. 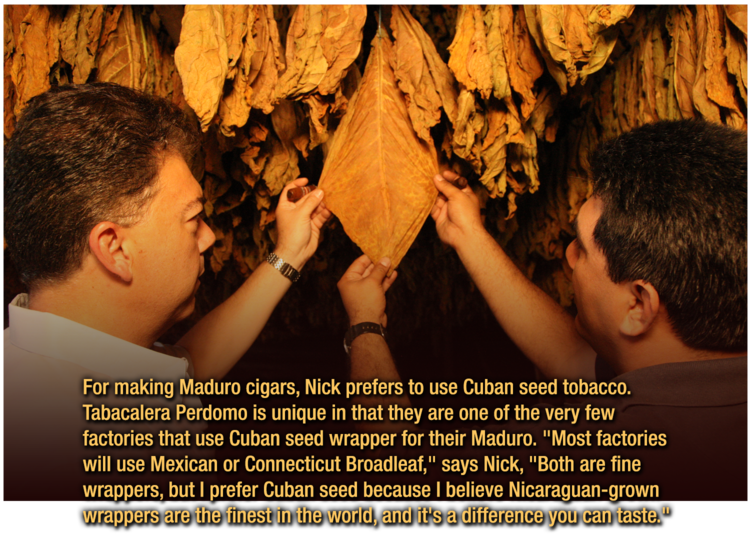 Behind the Red Door

In an old Cuban tradition used by my Father, whenever a guest enters the rolling room, the workers say “welcome” to them by banging their chavetas (tobacco cutting blades) against their rolling tables. It may be noisy, but it’s very flattering.

Our Factory Production manager is Sarah Gonzalez. She’s been working for the company since 1992 when my Father was still here. During the 1950’s, Sarah worked at the H. Upmann factory in Cuba, so she brings a wealth of Cuban rolling experience with her. When asked to compare the tobacco in Cuba, to the tobacco of Nicaragua Sarah says that today Nicaraguan tobacco is “far superior to Cuban;” only the excellent tobacco that was coming out of Cuba during the 1950’s comes close. Sarah has also been wowed by the technology that has developed since she worked in Cuba. For example, to Sarah, the draw testing machines are a godsend. Before there were draw testing machines, the rollers would actually put the cigar in their mouth to check the draw. Now we can draw test up to 10,000 cigars a day.

To help the operations in the rolling room running smoothly, we have a young man, Alexi Reyes, who began working for us 10 years ago as a roller, worked his way up to Quality Control, then Field Supervisor, and now he’s our Assistant Production Manager. We like to call him “The Hammer,” because he’s tough, but fair. One of the things he likes about working with our tobacco is, not only is it flavorful, but because of the way we ferment and age our tobacco, the condition of these leaves makes them easier to work with.

As for rolling, we use the same rolling techniques that Sarah used in Cuba. One rolling method, called entubar, naturally provides a much better draw and burn. My uncle, Tony Perdomo is our Assistant Factory Manager. He’s been here for 10 years and what has impressed him most over the years is that quality control is job number one. Some of our rollers have been here since we began in 1992, and even when my Father was running the operation, we have always treated them like they’re extended family. They also happen to be some of the most talented rollers you’ll find anywhere. For example, watch this segment on how we do our Torpedoes.

Once the roller has completed 50 cigars, they will be sent to quality control where they’ll be checked on a ring gauge meter, the foot of the cigars will be inspected to make sure the bunched tobaccos are all in the right place; then they’ll be tied into half wheels of 50, which we call Cuban wheels. Each wheel is marked with the name of the roller, the date rolled, the weight of the wheel, and the name of the blend. Once the cigars have been signed-off we will inspect them three more times in the afternoon. Here again, we’ll check for any soft-spots, check the bunches, and inspect the heads, which should look like artillery shells. Finally, we re-weigh them, count them, and from there they’ll go into the aging room.

Next month: We’ll show you how we make our 6 x 60’s and our top-selling cigar Perdomo Habano Gordo, how our cigars are draw tested, stripping and sorting tobaccos prior to rolling, and more.

Read More
Cigars 101
Coffee and cigars: so good on their own, even better together. See how they're related, and what factors make these two great tastes, taste great together.
Read More