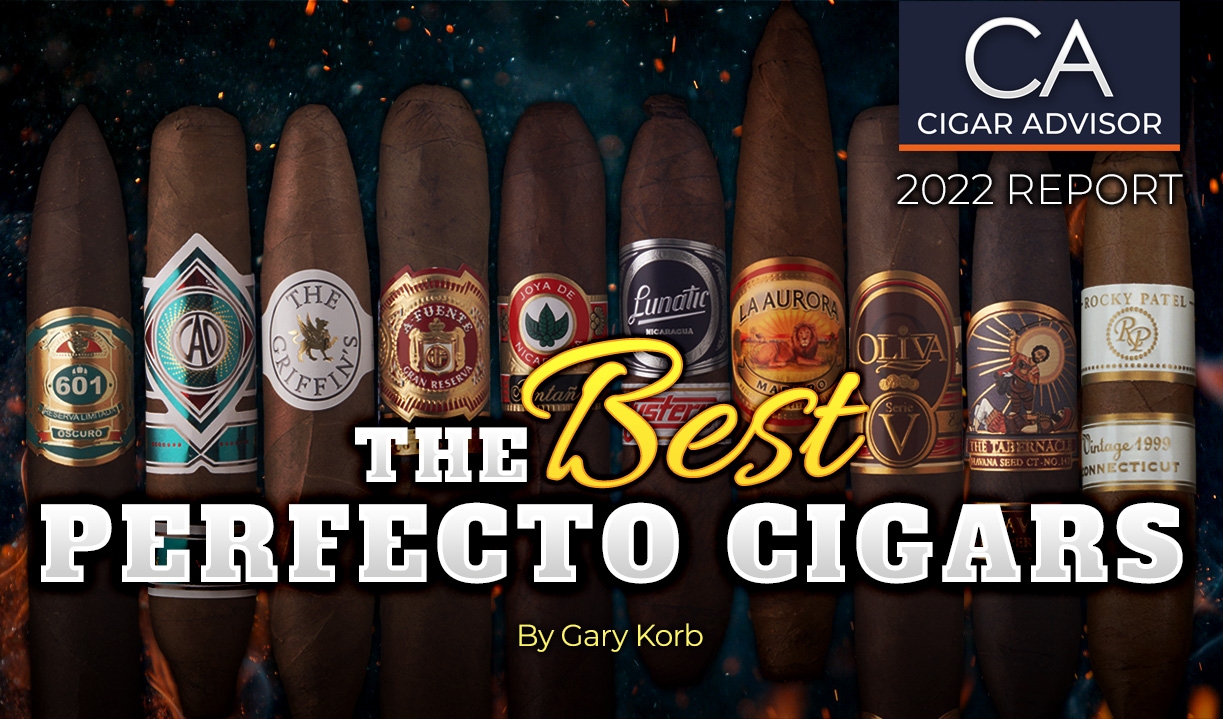 Our Top-10 Perfecto Cigars That Will Round-Out Your Palate

The Perfecto cigar. Defined as “a distinctive cigar shape closed at both ends, with a rounded head; usually with a bulge in the middle,” that image may remind you of the cigars often seen in cartoons. Those bulgy, blimpish Perfectos—also called Double Perfectos—are the most classic looking and my personal Perfecto preference. What they all have in common is the tapered foot, which in most cases comes almost to a point. Yet as you will see, a lot of today’s so-called “Perfectos” don’t necessarily fit the mold.

Before getting to the cigars, there are a few interesting things about Perfectos that may help you acquire a better appreciation for them.

Why the name “Perfecto?”

Most “Perfecto” cigars are identified by the nipple-like extension found at the end or “foot” of the cigar. The idea is this: Instead of toasting and lighting the entire foot of the cigar as you normally would, no toasting is required. You simply light the nipple, or “stem,” and as it turns to ash, the tobacco will burn outward toward the wider part of the cigar’s body. If the cigar is made well, the foot will light “perfectly,” thereby dubbing the shape “Perfecto.”

There’s also something aesthetic about them to which the word Perfecto fittingly applies.

Who made the first Perfecto cigars?

Founded in 1903 by Edwardo León Jimenes, La Aurora Cigars were made in the Dominican Republic at a time when Cuba ruled the premium cigar kingdom. The factory was located in Guazumal, which is not far from Tamboril. According to a 2003 Aficionado interview with one of Edwardo’s sons, Fernando León Asensio, David Savona wrote: “The first La Auroras were Perfectos, pointed at each end with a bulbous middle. The cigars were called preferidos.” They were Dominican puros, too. Re-introduced to market in 1999, todays La Aurora Preferidos are made in several blends, and naturally, one of them is included in this article.

Not far behind was Arturo Fuente who was making Perfectos as early as the 1920s. In fact, the Fuente Hemingway cigars that debuted in1983 were made from those first original Perfecto molds. Although the Hemingway line is perhaps the most popular line of Perfecto cigars sold today, they don’t have the traditional midsection bulge.

In 2019 La Aurora introduced the portly, 4”x58 La Aurora 107 Zeppelin Perfecto to American markets after an initial international release. Then in February of this year, Davidoff introduced the Davidoff Winston Churchill Limited Edition 2022 Perfectos. Like the original 1903 La Aurora Preferidos, they have the same shape and are made in the Dominican Republic, but the blend is not a puro.

Unfortunately, it was nearly impossible to find any information on Cuban-made Perfectos prior to 1903. So, if anyone reading this has it, please send it along.

How do you light Perfecto cigars?

Due to the miniscule amount of real estate at the foot, Perfectos are the easiest cigars to light. Starting with the cut, if the head is tapered to a point, clip about one-quarter to three-eighths of an inch. If it’s round in appearance, cut it as you would most traditional cigars. You may even want to use a V-cutter, which is ideal for cigars like Perfectos, torpedoes, and similar tapered shapes. Check the draw.

Next, for most Perfectos, you can use a cedar match placed very close to but not touching the foot and light with the cigar in your mouth. If you prefer using a torch, make it a single. While holding the cigar, keep the flame at a safe distance and zero-in on the narrow opening at the foot until it glows and blow on it. That should get it started, then draw on the cigar.

It means, “the point” in Spanish, and the point of the 601 Green Label Oscuro La Punta is to juice your palate with 100% Nicaraguan flavor. This is one striking Perfecto, especially thanks to its extra dark Habano Oscuro wrapper. And although it doesn’t have a bulge, it does have an attractive taper that stretches from a 48 ring to a 52. The full-bodied blend developed by Erik Espinosa and AJ Fernandez is hearty, spicy, complex, and made to be savored slowly. Geared for more experienced cigar smokers, La Punta makes its point extremely effectively.

Arguably the most popular Perfecto cigars since Arturo Fuente introduced the Hemingway line in 1983. Mellow to medium in body, Hemingways are among the few blends that appeal to cigar smokers across the board. Rolled in one of the world’s best African Cameroon wrappers, too, the Churchill-sized Classic is a great example of a cigar living up to its given name. From its perfect burn to its medium body, to its sweet-cedary flavor and delicately spicy finish, the Classic is simply smooth, tasty, and relaxing. Nothing more needs to be said.

You could call this CAO’s answer to the very popular Arturo Fuente Short Story. It’s the same size, the same shape, and rolled in the same type of wrapper, Cameroon. So, how do they compare? Well, we’re talkin’ apples and oranges because the core blend of the Fuente is all Dominican while the CAO is all Nicaraguan. It’s also what makes this little number intriguing. The smoke is medium in body and a bit darker in tone with well-balanced notes of earth, cedar, espresso, and spice. All-in-all, a tasty short smoke that satisfies whenever the mood strikes you.

Here we have a more classic-looking Perfecto from The Griffin’s. Rolled in a spotless Ecuadorian Connecticut Shade wrapper over prime Dominican long fillers, you may find this cigar a little more than mellow in body and strength. The two narrow tapers at both ends concentrate the creamy smoke for a peppery start and finish. As you begin to near the mid-section, the flavors open up to a pleasant mix of cedar, cashews, and spice. This cigar also qualifies as a first Perfecto for newly initiated cigar smokers.

One of the world’s classic cigars in a six by sixty Double Perfecto. Starting with its dark, oily Criollo wrapper, this puro is a bit odd-looking as a Perfecto. However, the wide ring makes up for what could’ve been a bulge and JDN has made easier and faster to light. And although the ligero tobaccos put this blend at medium-plus, the smoke is so well-rounded, even a moderately-experienced passionado can appreciate its velvety texture. Earthy notes, leather, espresso, cocoa, sweet tobacco and sundry spices culminate in a “gran banquet.”

One look at this Double Perfecto in its stunning red tube and it doesn’t get much more elegant. Open it and note that the foot is less pointy than The Griffin’s above, which offers a wider surface area for a more flavorful start. The naturally sweet Brazilian wrapper melds beautifully with the triple-aged long fillers to lead-off with espresso, cedar, and earth. Cocoa and peppery spice follow, as sweet tobacco and tangy citrus rally in the latter half. Blended for more experienced palates, this is a medium-plus smoke steeped with complexity that should be savored slowly and without interruption.

Like the Antaño 1970 above, this portly Double Perfecto Lunatic Hysteria also boasts a 60 ring. Deftly rolled in a dark Nicaraguan Corojo wrapper, this puro is made for cigar smokers who crave big, uber-spicy cigars with high-priming power. Dense earth, red and black pepper, dark chocolate, and charred wood greet the palate in a big Perfecto which, in spite of its boldness, is also well-balanced and deliciously creamy. Built to stand up to the elements, it’s also a great way to experience the intense flavor of Aganorsa’s prime tobaccos.

Released at the end of 2021, I’m pleased to see so much excitement over the Oliva Serie V 135th Anniversary. The commemorative, pen-shaped Perfecto is also one of the most stunning presentations they’ve done ever since the Serie V debuted 15 years ago. When the hearty Nicaraguan core meets the dark Habano wrapper, you’re in for a creamy and complex feast built on a foundation of earth, cocoa, leather, almonds, and more. Plus, considering the prices seen lately on luxury class cigars, this anniversary model is incredibly reasonable.

There must be something about 4×48 Perfectos, because here’s another, this time from Rocky Patel’s Vintage 1999 selection. Mellow, creamy, and medium-bodied, the blend takes seven-year-aged Dominican & Nicaraguan long-fillers and envelopes them in a vintage and bitter-free U.S. Connecticut Shade wrapper. Smooth and toasty from end to end, the smoke sizzles with notes of cedar, baking spices, cream, cocoa, and leather. A satisfying “anytime cigar” for newbs and veteran cigar smokers alike, it’s hard to believe they packed so much flavor into this petite number.

Like Michelangelo’s David, this David is a stunning achievement. From the band art to the luscious Havana seed wrapper, to the perfect construction and intense flavors. Additionally, the wrapper was a labor of love for Nick Melillo who worked with AJ Fernandez on it for almost four years until it was nothing less than exquisite. A sweet San Andrés Mexican binder plus prime fillers from Nicaragua and Honduras complete the recipe. The smoke issues layered flavors of cinnamon, cocoa, nuts, black pepper, and baking spices. Tailor-made for cigar smokers who have a fair amount of experience with bold cigars, this is one Perfecto that you will commit to memory.

So, will the Perfecto make a comeback? Certainly, all of the above cigar makers and others feel there’s a market for them or why bother. If you haven’t had the pleasure of a Perfecto until now, I hope this report has given you a reason to try some of them. There’s certainly something for everyone above. Plus, if you’re already a fan of this classic shape, I hope I’ve opened your eyes to some Perfectos you may have missed. If so, once you’ve had any of them let me know what you thought with a comment.

LOL. No dis intended. At first, I included Short Story in my list, but for one, I thought the Hemingway Classic was a better all-around choice; secondly, I wanted to showcase a few newer cigars made in the “Short Story” format.

Sounds like a good one. I’ll have to check it out. Thanks. G-~