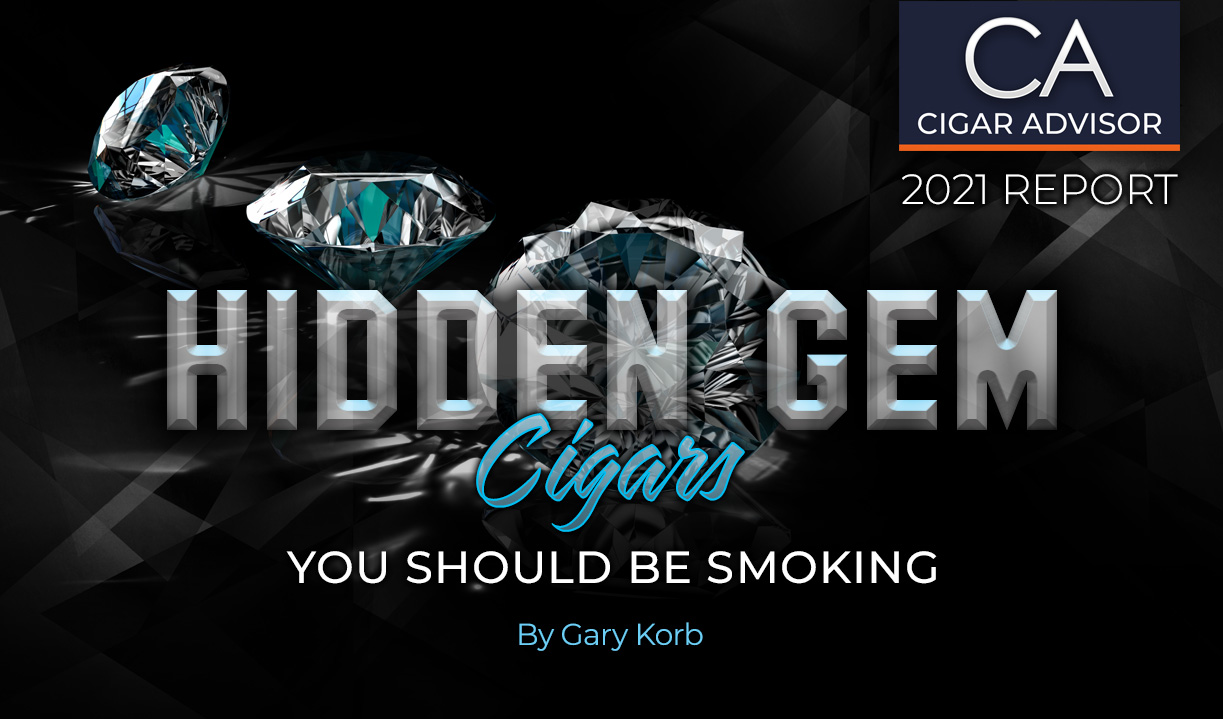 2021 CA REPORT: Hidden Gem Cigars You Should Be Smoking

10 of the best cigars you just may have missed…

You’ll notice that most of the cigars in this list are Toros and wide ring Robustos. That’s because they’re the shapes I smoke most often, which is how I discovered them. Obviously, there are plenty of hidden gem cigars in many other sizes, and perhaps I’ll do a follow up piece with some of those. Many in the list are also boutique cigar selections. Of course, odds are you’ve discovered a few hidden gems of your own over the years. So, see if you recognize any of these cigars; and if not, consider giving them a longer look.

And of course, if you’ve got some hidden gem cigars of your own, please let us know by leaving a comment below!

Founded in 1874 by R.G. Sullivan, 7-20-4 Cigars represent an important chapter of American cigar making history. Having practically fallen off the face of the earth by the 1960s, Kurt Kendall revived the brand in 2006. Since then, 7-20-4 has been one of the most popular boutique cigar brands. Made with a six-nation blend, the Robusto burns like a charm issuing a creamy, well-balanced, leathery smoke, accompanied by a chorus of cedar, nutmeg, coffee, and black pepper. If you like creamy, complex, and chewy smokes, this vitola will get you there at a pretty reasonable price, too.

Black Label Trading Co. was born out of brand founder James Brown’s love of cigars and Nicaraguan tobacco. In 2015, he opened his Oveja Negra (Black Sheep) factory, to make, “New School cigars with Old School techniques.” Known for their extra bold artisanal blends and Goth image, Black Label Trading has built a large, dedicated following. The Lawless Robusto is for those who usually avoid strong, spicy-peppery cigars. Cinnamon, nutmeg, and some nice sweetness lead-off transitioning to flavors of sweet cedar and cocoa, while black pepper also plays a big part and lingers on the finish. Oh, it’s got that BLT fullness alright, but it checks all the right boxes.

You usually hear a lot about CAO Brazilia, CX2, and Nicaragua, but not all that much about the CAO Colombia. So, let me tell you a little about this line. It was CAO’s first cigar to be blended with Colombian tobacco, and it ain’t no ordinary leaf. It’s a Cuban seed filler tobacco called Ica Mazinga. It’s been grown in a remote mountain region of Colombia since 1820 and it took CAO 15 years to perfect it. The Tinto issues a mellow, medium-bodied smoke rife with flavors of roasted nuts, along with balanced notes of earth, cedar, coffee, and some fruity sweetness.

Kristoff Cigars founder Glen Case wouldn’t put his signature on a blend unless it met his high standards. One of the earliest “boutique” cigar brands, debuting in 2005, Kristoff has had a terrific run making top shelf cigars finished with pigtail caps. The brand has earned a rep for making full-flavored, complex cigars and the GC Signature Robusto is a prime example. Dominated by a rich apricot note, nutmeg, espresso, brown sugar, and dark chocolate ensue as black pepper lingers on the finish. The cigar hits the full body mark by its midpoint, while revealing an excellent burn and ash. If you like dark and delicious, sign here.

La Aurora, the Dominican Republic’s oldest cigar company, built a large portion of their reputation by making Dominican cigars with African Cameroon wrappers. You’ll find them on their mainline cigars, Preferidos, and this 1903 revival. What makes the Cameroon wrapper on this cigar unique is that it’s not out of Africa; rather, it’s grown in Ecuador from African Cameroon seed. Don’t look so disappointed—it’s delicious. And if you like the sweet-spicy flavor of cinnamon, this cigar brings it in spades. Cocoa, caramel, roasted almonds, and coffee also take part in this medium-plus smoke that leaves a touch of citrus tanginess on the finish. If you’re a Cameroon comrade this Churchill is a no brainer.

I bought my first Los Caidos cigar on a whim knowing nada about them and boy did I luck out. Presented in boxes of 11 (10 Toros and 1 Torpedo) in your choice of blue (Police) or red (Fire/EMT) bands, Los Caidos is Spanish for “the fallen.” New Jersey shore cigar retailer, Steve Zengel created them to honor family members of fallen police officers & firefighters, and he chose some of the best Nicaraguan tobaccos for these puros, too. Medium in body, the smoke is uber creamy and loaded with sweet tobacco, baking spices, toasted nuts, and more. Created for smokers at every level, this Toro is more than a great cigar, it’s a great cause.

Thin, tanned, and always sharply dressed, Nestor Miranda bears a resemblance to the mature, cosmopolitan bon vivant right out of Central Casting. He’s also one of the finest cigar industry personalities I’ve had the pleasure to meet. When his Special Selection cigars debuted in 2006 I lauded them, and I was happy to learn the line returned to the Miami Cigar & Co. portfolio in 2019 for the company’s 30th anniversary. Still made at My Father Cigars, peppery spice leads-off this frontloaded Toro. This wide ring Robusto is remarkably creamy issuing a toasty, earthy, nutty, and sweet-spicy smoke with nutmeg and a sweet note of caramel on the finish.

If someone gives you a phone number with a 505 country code, the country is Nicaragua. That’s where this puro from Romeo y Julieta is from. Debuting in 2016, the brand turned to the Plasencia family to create this dark, chewy, and complex cigar—and boy did they give it the Midas touch. The full-flavored blend starts with a lustrous Habano Jalapa wrapper and binder that surround a long filler recipe from Nicaragua’s three main growing regions. Starting with a mix of orangey citrus, leather, and nutmeg, the smoke is uber creamy and well balanced with a sweet-spicy finish. Cedar, coffee, and baking spices join the fray, weaving in and out in what can best be described as a real joy ride.

Here’s another Cuban heritage cigar blended by the gifted team of Rafael Nodal and Nestor Andrés Plasencia—it’s also another Nicaraguan puro. Having an amazing array of fully-aged tobaccos at their disposal, they used vintage Nicaraguan tobaccos harvested from 2008 to 2010. They were also successful at giving this blend an impressive Cuban style character and aroma. Earth, cedar, and sweet spice open the show with a sweet floral aroma. The smoke is creamy, perfectly-balanced, and medium-bodied throughout issuing base notes of cedar and sweet spice and dried fruit. Simmering below the surface you’ll find dark roast coffee, nutmeg, and caramel. All-in-all, one of the most rewarding non-Cuban Trinidad cigars out there at a very welcoming price, too.

I didn’t choose this hidden gem because it’s sold only at Famous Smoke Shop, I chose it because I like box pressed cigars and this Viva La Vida is a superb smoke on every count. If you don’t know the story, Viva La Vida comes from Billy and Gus Fakih of Smoke Inn fame who teamed up with AJ Fernandez to create what became an instant hit. Billy and Gus eventually met with Famous about making a limited run using the same blend in a box pressed Toro. Medium-plus in body, the smoke is deliciously chewy and creamy with a lingering sweet-spicy finish. Leather, cedar, and sweet spice lie at the core as fig, fennel, and roasted nuts squeeze-in for what becomes a marvelously complex smoke.

Thanks for the recommendations. I have smoked that Viva la Vida and really enjoyed it.

Reading Time: < 1 minute #nowsmoking Asylum Medulla Oblongata Maduro Toro: “a dense, medium-plus smoke brimming with…”, well, LOTS of flavors. Click now for the tasting notes, and everything else you need to know about this cigar in under 60 seconds…