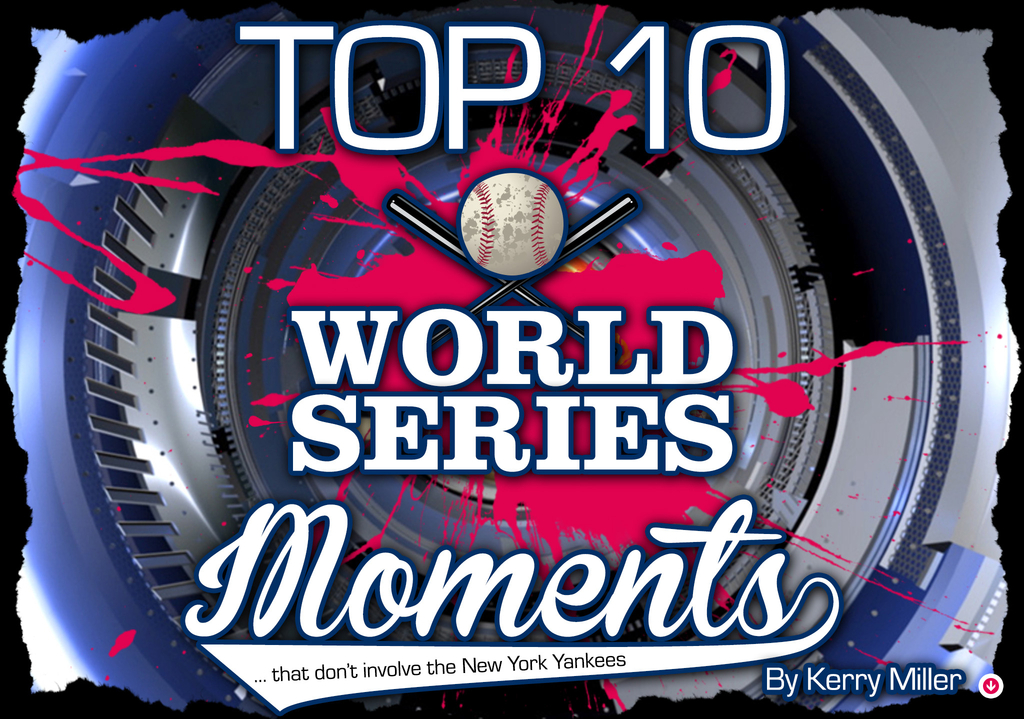 a : intense hostility and aversion usually deriving from fear, anger, or sense of injury.

b : extreme dislike or antipathy : loathing.

Pretty much. At least when it comes to being a baseball fan – and if you, like us, often find yourself daydreaming about a world in which the most insufferable MLB franchise never existed, well…we've got quite the list for you.

We'll set aside the usual complaints about bottomless bags of payroll money and steroid allegations; after all, we don't need to get into the mud. But we can give you truth. They may have tainted 40 of the 108 World Series to date, but here are the 10 greatest moments in World Series history that in no way, shape or form involve those damn Yankees.

There have only been 15 unassisted triple plays in MLB history, and in Game 5 of the 1920 World Series, Indians second baseman Bill Wambsganss turned the first and only one in the postseason. Wambsganss snared a line drive off the bat of Brooklyn Robins' pitcher Clarence Mitchell. He then stepped on second base for the force out of Pete Kilduff and placed the tag on Otto Miller coming at him from first base. If you've never heard of any of those people before, you're not alone.

The A's swept the Giants in the 1989 World Series, but it took 14 days to play the four games due to the Loma Prieta Earthquake. Game 3 was postponed for 10 days, and the combination of the break and the quake woke up the bats in both dugouts. After combining to score 11 runs in the first two games, 20 runs were scored in Game 3, including a record-tying seven home runs.

The Cardinals held a 3-2 series advantage and a 1-0 lead in the 9th inning of Game 6 against the Royals. Rookie reliever Todd Worrell came on for the save and got Jorge Orta to ground into the first out of the inning. However, despite clear video evidence to the contrary, first base ump Don Denkinger didn't see it that way. The Royals would go on to score two runs in the inning for the win, and destroyed the Cardinals 11-0 in Game 7 for their first and only World Series title.

With the Red Sox trailing the Reds three games to two, Carlton Fisk hit what appeared to be a long foul ball in the bottom of the 12th inning of a tie ball game. Fisk flailed his way down the first-base line and somehow willed the ball to hit the foul pole for a game-winning home run. Unfortunately, not only would the Red Sox go on to lose Game 7, but we have since been subjected to 38 years of golfers thinking they can telekinetically alter the course of a poor shot.

Center field at the Polo Grounds ranked among the deepest in the history of MLB stadiums, but it wasn't too deep for Willie Mays. With the game tied in the 8th inning, Mays made what is still widely regarded as the most iconic catch in baseball history, hauling in an over the shoulder grab after running the length of a half-marathon to reach Vic Wertz's drive to the warning track. The Giants would go on to win the game and sweep the Indians.

Red Sox championships in 2004 and 2007 have since diluted the luster of this moment, but it took nearly 20 years to forgive Bill Buckner for letting Mookie Wilson's ground ball roll between his legs to hand a series-tying win to the Mets. Buckner had a career fielding percentage of .992 at first base, but that just so happened to be the 1-out-of-every-120 plays that he would botch.

The greatest seven-game series of all-time would have ended after six if not for the heroics of Kirby Puckett. In the third inning, Puckett made a leaping grab against the wall in left-center field to rob Atlanta's Ron Gant of an RBI double. It was the walk-off home run in the bottom of the 11th inning, though, that is commemorated by a statue at Target Field.

Both Kirby Puckett and David Freese hit series-extending, walk-off home runs in the 11th inning of Game 6. However, Freese was also the reason extra innings even happened for the Cardinals. Trailing the Rangers 7-5 in the 9th inning with two outs and two men on base, he launched a game-tying two-run triple into right field, sending the game to extra innings where he would then homer to dead center.

Kirk Gibson was both sick and injured prior to the start of the World Series. He wasn't expected to play at all, but he hobbled his way to the plate for one appearance that is replayed more than perhaps any other at-bat in World Series history. Facing one of the greatest closers of all-time, Gibson hit a walk-off home run off of Dennis Eckersley, paving the way for the Dodgers to top the Athletics in five games.

After removing Bill Mazeroski's glorious Game 7 walk-off home run against the Yankees in 1960 from consideration, Joe Carter's three-run blast off of Mitch Williams was left as the only World Series ending home run.

So there you go – plenty of baseball, and not a pinstripe in sight. Maybe this year's Fall Classic will produce a gem for next year's list….

Kerry was born and raised in south-central Pennsylvania at the epicenter of the Baltimore, Philadelphia, Pittsburgh, and Washington fan bases. Rather than aligning himself with one of those cities, or worse, rooting for some combination of the four based on whichever was doing the best in each sport at the time, he went outside the box and chose to root for the arch-rivals of his dad’s favorite teams (sorry, dad). In love with both sports and statistics, Kerry began writing about fantasy football in 2006. Eventually realizing that every mid-20's male with a laptop was blogging about fantasy football, he took his talents to college basketball, dedicating the next few years of his life to perfecting the art of Bracketology. During the hoops off-season, he obsessively dabbles in the world of Major League Baseball.

Reading Time: < 1 minute Well-built with an attractive, silky, blonde wrapper. Creamy and mellow to start with an understated sweetness and some peppery hangtime. Smoke is thick and chewy with well-rounded, velvety flavors of oak, cashew, peppery spice, and a subtle note of caramel. Nice “first cigar of the day.”