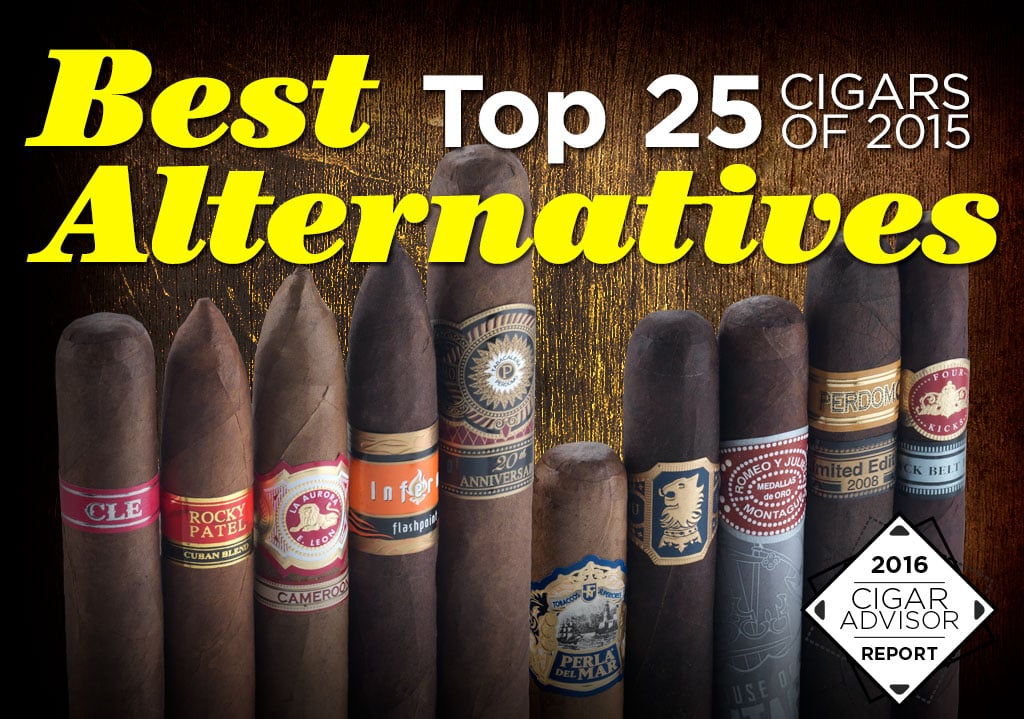 The Best Alternative Smokes to the Top 25 Cigars of 2015

Every December, cigar smokers look forward to the list of the “Top 25 Cigars” of the year published by Cigar Aficionado magazine. The list has become so highly-anticipated that the publication begins leaking the names of the cigars between 11 and 25 several weeks before the final top-10 are released. Retail cigar stores begin clearing space to display the winning boxes as they await the onslaught of customers who will be coming in to buy the best cigars of the year. Think of it as the Hajj for cigar lovers. This concept of creating an annual “best” list has become so popular, practically every cigar news and blogger site now has their own Top-25 list, including us here at CigarAdvisor.com.

Manufacturers love it, too. Landing a spot in Aficionado’s “Top 25 Cigars” is akin to winning a coveted Oscar for “Best Picture.” Some brands sell out entirely from the notoriety, especially if they’re limited edition cigars, while others that some cigar smokers may have overlooked earlier in the year are given new life.

Recently, Famous Smoke Shop created a cigar sampler made up of cigars listed in the “Top 25 Cigars of 2015.” Suddenly, a lightbulb appeared overhead. What if we took the 10 cigars in that sampler and created a second sampler made up of alternative cigars? Let’s face it, no matter how many accolades a given cigar receives, when you come right down to it, opinions are utterly subjective. For every good cigar on the market, there’s another cigar that’s just as good…in someone else’s opinion. So, for those who may not agree with the chosen cigars – and there always are – or those looking for “equivalent” smokes that are easier on the wallet, we present the following alternatives to 10 of the Top 25 Cigars of 2015, and why they were selected.

This cigar is made in Estelí by Oliva, who, like the Garcia family, have been making some of the best Nicaraguan cigars for generations. Like the Le Bijou 1922, this torpedo has a diverse, all-Nicaraguan core, but with a deliciously dark Mexican San Andres Morron wrapper that’s comparably sweet as the Nicaraguan Pelo de Oro Oscuro used on the Le Bijou.

Though it’s not box-pressed like the CAO Flathead V642, the Four Kicks Black Belt Buckle Corona Gorda does boast a similar Nicaraguan long-filler core and an equally dark and oily Connecticut Broadleaf Maduro wrapper. The smoke is full-flavored, earthy, woody, and impressively complex with just the right amount of sweetness.

Not an easy match-up due to the Don Carlos’s extraordinary reputation, but this figurado similarly melds the most select Dominican Piloto Cubano longfillers with a dash of Nicaraguan for extra depth, and completes the recipe with a plush Cameroon wrapper. Medium-bodied, you may pick up notes of sweet spice, cocoa, and cedar along the way.

Here’s a match that’s so close it’s scary. Rocky’s bestselling The Edge Habano line has become a modern classic, but one taste of the Cuban Blend with its plush Corojo wrapper offers a bold, spicy, creamy, and “decadent” smoke with awesome balance in a virtually identical blend. You can’t miss with this alternative, and you’ll save a few bucks, too.

Even Cigar Advisor had the Laranja Reserva near the top of our Top 25 Cigars of 2015 list, so finding an alternative presented a unique challenge. The result was this Romeo House of Montague Robusto. Blended with Nicaraguan, Dominican and Brazilian long-fillers, the Brazilian Arapiraca wrapper may not have all the citrusy notes found in the Brazilian Laranja leaf, but it makes up for it in balance, complexity and natural sweetness in a more medium-bodied smoke.

Several Alec Bradley Cigars have earned high scores for their complexity, full-flavor and pristine Honduran Trojes Corojo wrappers, but few can do Corojo like Christian Luis Eiroa. His CLE Plus Toro is a full-flavored, all-Corojo Honduran puro that smokes like a dream. Loaded with caramelized flavors of cedar, nutmeg, and a hint of cinnamon, this is one creamy, sweet n’ spicy delight.

This Cuban-pressed Perdomo2 Limited Edition 2008 Maduro Epicure is a Nicaraguan puro. It may not have the complexity of the Avo’s multi-nation blend, but you will find plenty of rich, earthy-spicy Nicaraguan flavor in there. Plus, the inherent sweetness of the maduro wrapper is on-par with the Syncro. It’s also a lot more affordable.

This favorite from Drew Estate has a lot in common with the L’Atelier: Rich-tasting Nicaraguan long-fillers, a savory Mexican San Andrés Maduro wrapper, and outstanding quality from a top-tier tabacalera. Add the Brazilian Mata Fina and the T-52 stalk-cut binder, and you’ve got yourself a thick, creamy, full-flavored banquet of a smoke.

With all due respect to Montecristo’s Grupo de Maestros, Nick Perdomo and his team also use a variety of Nicaraguan tobaccos from Estelí, Condega and Jalapa in this extraordinary tribute to 20 years of Nicaraguan tobacco farming and blending achievement. Rolled in a flawless and flavorful Sun Grown wrapper, 14 months of bourbon barrel fermentation and at least 6 years of aging make this puro nothing short of magnificent. Brimming with caramelized flavors of sweet wood and spices, this savory surrogate delivers rich complex flavor in spades.

And there you have it: 10 cigars that stand-up to an equal number of sticks that have been chosen to be among “the best.” Most of these top 25 cigars were hard acts to follow, and let’s face it, we’re talking apples to oranges; but if nothing else, you’ll save some money in the process.

I don’t see the point

I found this article interesting, it gave me some insights into brands I was not familiar with.

So glad to see the Undercrown listed… I believe their Corona Doble size is one of the best tasting and constructed cigars out there.

Great article on alternatives. I smoked many of the list, and really was not impressed with some. I’m always looking for sleepers and it’s great to see a bundle finally!

Reading Time: 8 minutes In this edition of the Cigar Advisor Playlist, we celebrate the 50th anniversary of Woodstock. Check out our groovy picks of cigars paired with songs played at America’s greatest music festival.