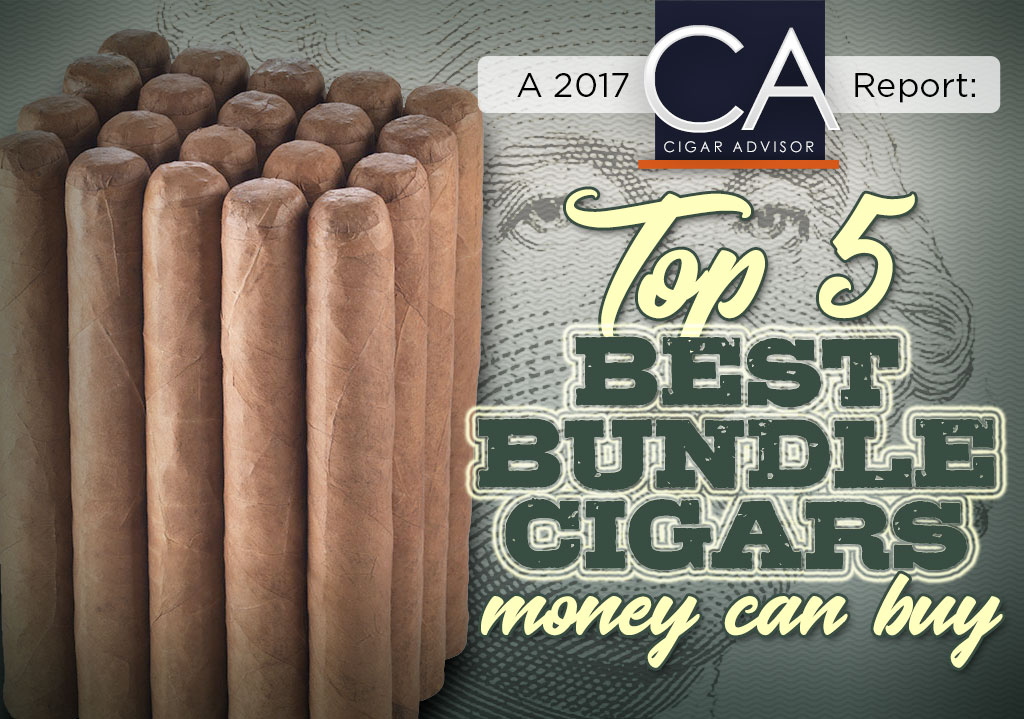 Today, we bust the bundle myth for good.

Remember your first time in a cigar shop? You might have asked, “why are bundle cigars cheaper?” And the person minding the shop told you some variation of “because…they’re cheap.”

Just because a cigar doesn’t come in a box, doesn’t mean it’s second-rate.

By now, I think we can all agree that a box is not the factor it used to be…they cost more to make and sell, but money doesn’t buy everything – and that includes good cigars. I’ve had a bunch of great smokes in the past few weeks that cost me less than $5 a piece, pleasant bundle surprises, one and all; some had way more flavor than box sticks that are 4x the price. I’m sure you’ve had the same: somehow, we’ve become accustomed to the idea that boxes are only fit for better cigars.

That’s where my best bundle cigars picks come in – especially the pricey ones we’re talking about here.

Once you disconnect the bond between package and price, this convention of “you get what you pay for” becomes more meaningful – as the best bundle cigars are made with the same (or better) top grade tobaccos as their boxed counterparts. THAT’S the real cost driver: how hard it is to get some of these tobaccos, how much there is to go around, and how labor intensive it is to get that leaf tasting so good.  Here are a couple of reasons why many top cigar makers are opting out of the box business for their premium releases…

In the case of Drew Estate, let’s talk about Nica Rustica cigars. They’ve always been packaged in this unboxed format, carving out a niche between box and bundle that we’ll call “soft packs.” While the DE folks could have created what are arguably the best bundle cigars on the planet – according to Drew’s Sam Morales, “This is part of our initiative to slowly stop using boxes and relying on wood from Nicaragua.”

Second: just like a box is a piece of artwork, the soft pack uses colors, textures and materials that give the cigars a feel and flair that a few layers of cello wrapping won’t deliver. These design advancements afford cigar makers more opportunities – and a lot more leeway – when it comes to creating something really special, or using some materials to get something other than the traditional “look.”

While it’s true that cigar factories make some of their bundles to give you more value for your cigar money, these five “best bundle” picks are anything but cheap smokes – these are A-grade quality all the way. Here’s just a taste of what money can buy…

Actually, this blend is in a box too – but a hefty bundle of 20 puts the Oscar across the finish line as one of the priciest bundles out there, upwards of $11 a stick. The “Oscar” is Oscar Valladeres, who learned cigars from Rocky Patel over the course of a decade in Honduras; just a few years in, and Oscar is a bona fide boutique star. The Oscar Habano is comprised of full-bodied Nicaraguan and Honduran fillers, trimmed in an Ecuador-grown Habano (obviously) wrapper; what’s special is that the usual cellophane wrapper has been tossed in favor of wrapping the finished product in a candela leaf, which – according to our Cigar Dojo friends – is done “to protect the wrapper’s natural oils and create an unusual appearance.” The Oscar Habano cigars are regular production, but like most of Valladeres’ cigars, have become quite the hot commodity.

In a word, “robust.” While it’s not quite as potent as the vision-blurring original CroMagnon, Aquitaine has more than enough oomph to kick down the doors and unload flavor measured in tonnage. The long fillers are nothing but Nicaraguan; the binder is a more mellow Cameroon, and the whole thing is finished in savory Ecuadorian Habano Ligero. This is the high priming stuff – the leaves are thick and oily, making for massive flavor and aroma. Yes, you can buy it in a box, but a bundle buy on this hearty smoke means more is better. CroMagnon Aquitaine is very rich, and pound for pound, one of the best bundle cigars in the inventory.

The original soft pack. I remember when the Bait Fish came on the scene a few years ago – it was bedlam. The. Hottest. Cigar. And those who hadn’t been initiated to the Drew Estate Way were left standing by to watch, wondering just why the hell everyone was going nuts for a bundle smoke. This 4×44 Corona is more than a full flavored fishing buddy – it is a zesty blend of Brazilian and Nicaraguan long fillers clad in San Andres Maduro wrapper (one of our house favorites) that sets the hook and reels you in. You see what I did there…Don’t let this be the one that got away (sorry, I’ll stop).

Not content to leave it at Tatuaje, Pete Johnson launched L’Atelier Imports – and more innovative blends – in the cigar market. L’Atelier cigars are, for sure, high end stuff; and to have a bundle splashed with an elite name only reinforces my original point, that the best bundle cigars aren’t always cheap. Trocadero cigars strikes a balance, however, offering up this smooth n’ mild L’Atelier-ish recipe, wrapped in Rosado-hued Nicaraguan Habano. A shift in intensity from other Pete Johnson blends, at a more down-to-earth price…but worth the cost of admission.

I had avoided these Oliva firecrackers based on reputation alone, having heard its supposed origin story; my loss. Don’t be fooled, this is the Strong One – a Nicaraguan smoke wrapped in exceedingly toothy Connecticut Broadleaf Maduro, that doubles up on all things spice. But some very enticing tastes come through loud and clear, even with the power dialed up to eleven: sweet, leathery and earthy (though not all at once) make for significant complexity in a cigar that shines brightly, in spite of its heavy-handed notoriety.

So next time someone who’s new to cigars asks you, “are the best bundle cigars as good as the boxed ones?” Tell them “presentation isn’t everything” – sometimes, the prize inside is worth way more than the box it came in.

Perdomo Fresco should be there

What BS! Apparently, Famous doesn’t believe in passing along cost savings to the consumer. Check out the pricing on Oscar and Acquataine…cost per cigar is higher for the bundles than it is for the boxes on the Oscar and exactly the same regardless of box or bundle choice for the Acquataine.

David here. From personal experience (I’ve smoked a dozen or more of each), and many, many reviews, the L’Atelier El Suelo is a far better bundle offering from Pete Johnson, then the Trocadero.

El Cobre is very good, WHEN you find one that actually draws, but IMO calling it a “top 5” is a stretch. Not only the El Cobre, but many Famous exclusives made by Oliva tend to be very, very tight.

Reading Time: 4 minutes One of Tatuaje Cigar’s most popular small batch cigars, Gary reviews the box-pressed Tatuaje Mexican Experiment/MEII Belicoso. See how it compares with some of the other tasting notes this cigar has received, and if it pairs well with Tequila.