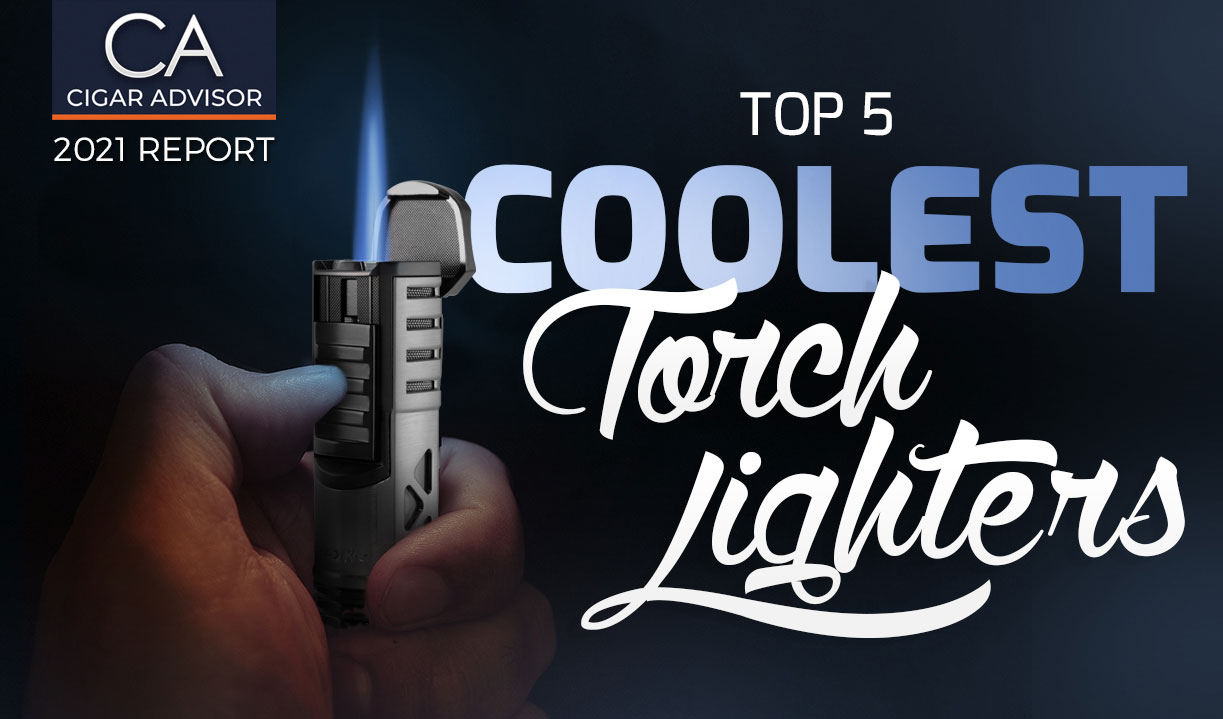 When you see a cool cigar torch lighter, that should be your reaction. It should have style. It should have wow factor. You know…the ability to make your buddies ask, “Hey, where’d ya get that?”

Lighters are undeniably one of the most important tools in a cigar smoker’s accessory arsenal. They’re far more efficient (and less wasteful) than matches, and much easier to use. Anyone who’s ever tried to light a cigar with a match in the wind knows what I’m talking about. Good luck with that, anti-lighter folk.

My focus in this article isn’t really about a lighter’s functionality so much as its ability to turn heads. People know that Ferraris have garbage MPG ratings, but they still line up to snap photos when one appears in the nosebleed section of Wal-Mart’s parking lot. Rest assured, I’d never recommend something that’s purely eye candy – destined to end up an eye-catching paperweight. I’ve got standards, too.

After surfing the Famous Smoke Shop website for what feels like days, I’ve narrowed down the list to what I think are the five most unique torch lighters. Cigar lighters that would look at home in Tony Stark’s personal collection. Check them out and let us know what lighter turned your head in the comments below!

If you wanna be the talk of the cigar lounge, Vector’s Icon II Prizm is a great start. With a stunning color-shifting pearlescent finish, Icon II takes your cigar accessory game into the digital age. Lighting it is as simple as touching the sensor on the front panel. No buttons to press (or break over time) and it charges conveniently overnight with its included USB cable. Don’t worry, it’s not all looks. The Icon II also boasts reliable triple jet torch flames that come to a point for precision lighting, a large fuel window and a flame adjustment wheel. And its paint job looks like this British TVR!

Whatever it is that the Colibri Quasar Table Top lighter looks like – I’me not sure. All I know is, it’s a sure-fire icebreaker at your next cigar social. Quasar represents the tippy top of Colibri’s high end tools, and you can get various matching cigar accessories to complete your Quasar collection – all with their signature hobnail design elements. In true table top lighter fashion, this Colibri is larger than it looks on the screen: 4.5 inches tall, 2.75 inches wide, and weighs nearly two pounds. Additional features include an assortment of available colors, large fuel tank, tapered triple torches, and an easy-press button that doesn’t compromise the design in any way.

Nothing says “we love this lighter” like buying a bunch and putting our name on them. And if the sleek metallic green finish isn’t enough to reel you in, wait ‘til you see its features. Underneath that shiny exterior, the Famous Smoke Shop exclusive Zephyr lighter matches minimalist design, a slim pocket profile, and a flat flame. A flame that gives the lighter double torch lighting power with single torch fuel efficiency. What more can you ask for? Oh yeah, it’s got a low price, too. Just don’t drop it in the rough, eh? Also available in metallic black.

Remember when I said that these are the supercars of the lighter world? Well…this torch actually looks like one…and it comes with a GT badge to seal the deal. Cool lighter rating = off the charts. Additionally, the Lotus GT packs a punch (literally) to cut your cigar. Just toss this thing in your pocket and head to the cigar lounge. It’s really the only tool you need. Not to mention twin flames and the ability to work in high altitudes – up to 12,000 feet. That means the GT can light your cigar on the summit of Mt. Hood if you’re so inclined. I’ll be reclined on my porch, thank you.

A perfect cigar accessory gift for any sportsman, the Xikar Tactical Jet Lighter is built to go anywhere and light in any situation. It comes with a single oversized jet torch with a 10mm flame that will ignite the biggest ring gauge cigars in your humidor with ease. Features include a Picatinny rail-style design that looks the part, a removable belt clip, and a beveled top to rest your cigar on when an ashtray isn’t an option. As is standard with Xikar, the Tactical Jet Lighter comes with a lifetime warranty and will stand up to tons of abuse – but we won’t be surprised if you end up babying it.