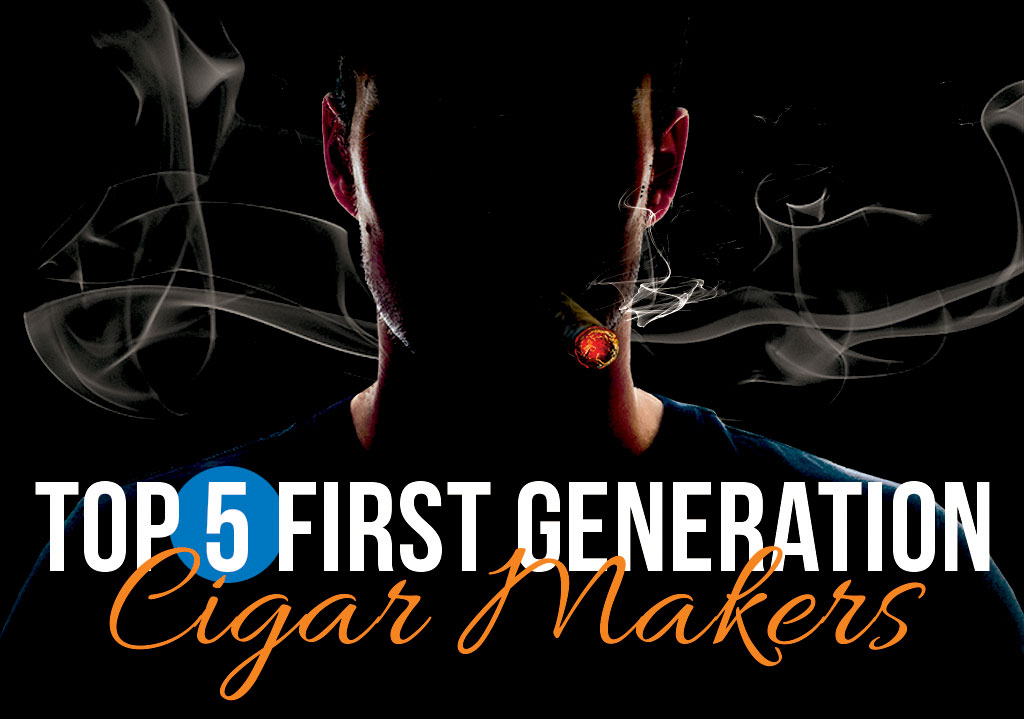 I’m drafting this article only days before IPCPR, the cigar industry’s biggest tradeshow, a yearly gathering of cigar makers and the retailers who come to meet and greet, as new product will be on display. Attending this show will be countless cigar-making legends who were born into tobacco families from Latin America: prolific names like Fuente, Oliva, Padrón, Eiroa and so many more. But there will also be some modern-day icons who entered the business with very little first-hand knowledge and just a whole lot of big dreams.

Below I list five of these men, all who have worked so incredibly hard to get where they are today. Even in the face of looming FDA regulations, draconian smoking laws, and outlandish tobacco taxes, they drive forward, while continuing to make some of the world’s very best cigars. I happen to know these five guys personally, and I know how much the cigar culture means to them, as well as the faithful followers who purchase their creations.

So, I give you my list of five, and a little bit of their backgrounds, as well as two cigar selections from these manufacturers that I, myself, enjoy.

I’m not sure I’ve ever known or talked to a gringo who has such over-the-top passion for premium aged tobacco as Steve Saka. He actually went to school for engineering, (I mean, what American-born kid says, “I’m gonna blend cigar tobacco when I grow up.”) A few years back he was a fellow writer of mine at Cigar magazine. While I was known for writing the funny shit that Lew Rothman loved to laugh at, Steve was basically my antithesis, crafting in-depth fascinating pieces, (one about black tobacco in particular), that have been lauded as some of the best ever written about the leaf. He was then brought on at Drew Estate to make things happen, and with the creation of the Liga Privada No.9 line, and being named president and CEO, it was mission accomplished. In July of 2015, he started Dunbarton with the main goal of making outstanding cigars (that he would enjoy smoking) the proper way, no matter how long or what it would take. Again, with his first introductions of Sobremesa and Mi Querida, a mission very much accomplished.

At 18 years of age, he left his lifelong home in Maine to fulfill his dreams as a rock-and-roll bassist in an LA band. Well, things don’t always work out for aspiring musicians, so Pete started working as a bouncer in a strip club. A local cigar shop he frequented needed some part-time help, which turned into a full-time gig and the dude was hooked on the cigar lifestyle. He started visiting cigar factories and reading everything he could on the subject as making his own cigars became the driving goal. Fast forward to his introduction to Jose Garcia (affectionately known the world over as Don Pepin), who began making cigars for the kid known as Tattoo Pete. Very early on his cigar was ranked #4 on the “Top 25 of the Year” list and success came fast. Today, while he’s not actually playing in a band, some would say he’s living the rock star life, with a clothing line he developed, amazing wines that he’s created, and of course, a portfolio of some of the most flavorful cigars available in the world.

Alan says he fell in love with cigars in his 20’s, but it was in 1996 that the reality of making premium-aged sticks became just that. Does anybody remember Occidental Reserve cigars? That was Alan Rubin along with partner Ralph Montero’s creation back around 2000. They were made by the great Henke Kelner (of the Occidental Factory in the Dominican Republic), the prolific master blender who made Davidoff’s high-end products. It was then followed up by the Trilogy and MAXX, and a real-live cigar company started to take shape. But it was the Alec Bradley Tempus that garnered super high scores from reviewers that set things on fire (pun definitely intended). When Prensado was named “2011 Cigar of the Year” with an insane ‘96’ rating, Mr. Rubin’s love for the leaf grew way more than ever expected, and was a testament to a lot of years of really hard work. In case you weren’t aware, Alec and Bradley are the names of his two sons who are now old enough to smoke great sticks, as well as work with dad in building the company to the next level.

Jonathan Drew wanted to be a lawyer but eventually ended up running a cigar empire. The Brooklyn boy, along with college frat brother Marvin Samel, started with a 16-foot kiosk, selling cigars at the World Trade Center in New York City. With a mind for marketing and pushing the tobacco-filled envelope even further, John took things in a new and different direction with the 1999 release of the ACID brand, which created a whole new cult generation of cigar lovers. Enter Steve Saka and the creation of Liga Privada No.9 and T-52, and Drew Estate exploded with a hardcore group of followers the industry had never really seen. 2007 saw the opening of the mothership – La Gran Fabrica Drew Estate – the 96,000 sq ft factory in Esteli, Nicaragua, one of the five largest cigar making facilities in the world. While they make outstanding cigars, so much of Drew’s popularity is due to the fact that John is a certifiably insane character (and I can say that with total love, being a longtime friend). His connection with his fans is genuine and the main reason for his amazing success as the reigning president of Drew Estate.

Being the son of a ball bearing factory owner from India isn’t exactly a glamorous sounding beginning for one of the world’s most successful cigar makers. At age 14, his family moved to Green Bay, Wisconsin, where he later attended the state’s university. He moved to LA to attend law school and became an entertainment lawyer, where the clientele loved premium cigars. He would be on movie sets, and between takes, actors like Arnold Schwarzenegger and Mel Gibson would fire up premium sticks, and Rocky became hooked. Much to the chagrin of friends and associates who said he was nuts trying to enter the cigar industry, 1996 saw the birth of the Indian Tabac Cigar Company. People were immediately drawn to the colorful packaging adorned with Indian Motorcycle artwork and some damned tasty cigars inside. Things shifted as he began marketing his own name, and cigars early-on like the Decade and the Edge catapulted his success. After the introduction of many popular brands, the Rocky Patel Sun Grown Maduro was named the #2 Cigar of the Year in 2016, which was a defining accomplishment for the guy many have referred to as the hardest working man in the cigar industry.

I haven’t tried any Tatuaje cigars yet but will make it a point on my next order. Great write up. Thank you.

Some good smokes right here by some gooooood cigar companies.

Don’t know how you leave Melillo off this list. Without him, Saka and Drew aren’t where they are today. He’s like the offensive lineman of the Drew team the from ’03-’13… all the work, none of the recognition. :-)

I met Rocky Patel a few times in San Diego he is a very nice guy, we smoked and talked for a while.
He tells some GREAT storys….