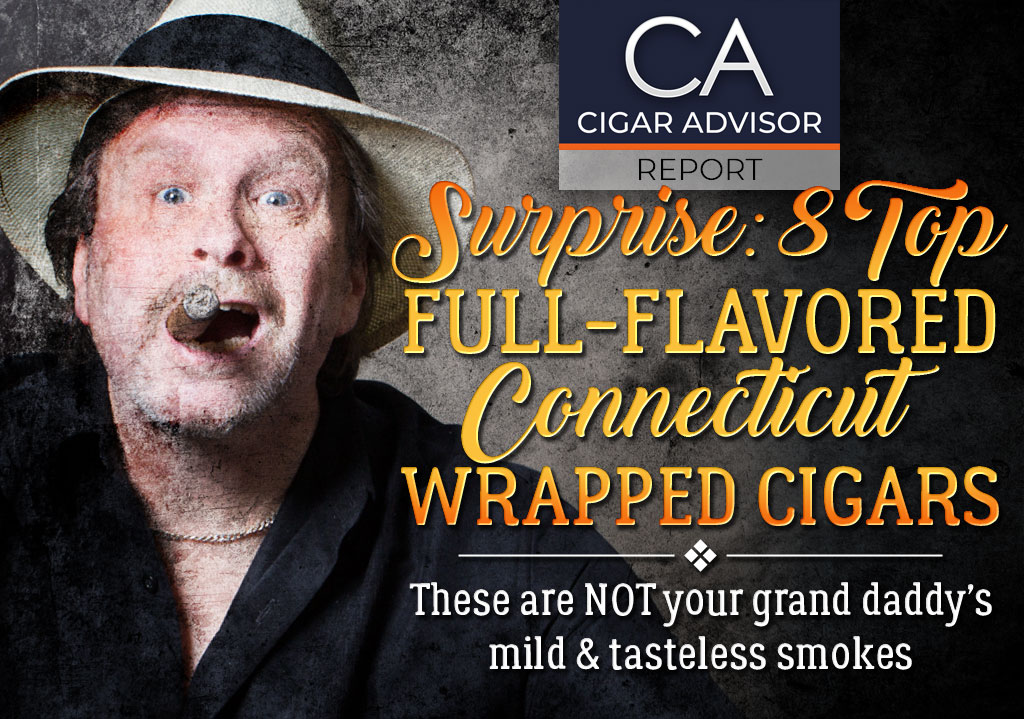 These are NOT Your Granddaddy’s Mild & Tasteless Smokes

I remember as a young child, visiting my Italian-side-of-the-family grandparents, watching my grandpa sitting on the stoop as we pulled up into the driveway. He’d be there with a few of his buddies from the old country, drinking cheap-ass dry red wine while puffing away on their fragrant cigars. Some of them chewed and slobbered on their mammoth sticks that were always very light and golden colored, or candela wrapped (the pale green shade leaf that’s extremely mild and a bit sweeter.) I loved that aroma and I always said I would smoke cigars like Grandpa one day.

In the cigar world, there are those lovers of mild and lightly flavored cigars – either morning smokers, older gents, newbies, or those who are occasional – golf, poker, etc. There are also those who love the full-bodied beasts – deep, dark, rich tobacco bombs, some known to actually grow hair in places where there was none. Now it’s no secret that the full-bodied guys generally turn their nose up at lighter shade Connecticut wrapped cigars because they just don’t have the flavor and depth that they’re looking for.

Well, today I am here to say SURPRISE, SURPRISE, my lovers in leafiness, there are a good number of well-known manufacturers who are making cigars with Connecticut shade wrapper leaf that are indeed full-flavored and extremely tasty. While I don’t think my Grandpa (God rest his bocce playing soul) would have liked them, I’ve listed 8 top sticks that I personally love and can smoke anytime of the day.

Drew Estate knocked this son of a bitch way over the centerfield wall. You’ve heard the old saying about a wolf in sheep’s clothing? Yeah, this one is that! Master Blender, Willy Herrera was called upon to take that dark, full-bodied Undercrown, tweak the blend and then add an Ecuadorian leaf to the outer layer that is so smooth that you’d swear it was from the Connecticut River Valley. Underneath that premium leaf is Dominican Criollo ’98, Nicaraguan Corojo and Criollo longfillers, with a Sumatran binder. Morning, noon or night, this smoke is gonna work for you.

I’ve often said that Nick Perdomo is a genius, and this cigar helps to prove my point. While this may be the lightest in the Grand Cru line, it is well-balanced and loaded with rich tobacco flavor. It’s a creamy, medium-bodied smoke with very tasty notes of sweet cedar and coffee beans. The outer wrapper is an oily, smooth Ecuadorian Connecticut leaf, with the inside containing premium aged Nicaraguan filler. Better than any dessert you can choose for after dinner, trust me on this one.

Can the guy that makes ridiculously tasty Nicaraguan bombers create a smoother, medium-bodied stick in a lighter wrapper? He already did. This one might be light in color with its flawless, golden Ecuadorian Connecticut wrapper, but it’s sure as hell not light on flavor. The inner blend consists of Nicaraguan Habano and Criollo long-fillers with a Nicaraguan Corojo ‘99 binder. There are wonderful notes of nuts, sweet chocolate and even some complex floral notes. Yum, I say… yum.

This Honduran flavor attack comes wrapped in a silky, smooth Ecuadorian shade leaf. What’s happened here is that they took a beefy Camacho, full-bodied inner blend of Honduran and Dominican long fillers and smoothed it out with that oh-so-good outer Connecticut leaf to make it a medium-bodied ‘gar that both mild and full lovers can enjoy. It’s a very creamy smoke with notes of espresso and a hint of nuttiness. So, so good.

Romeo, oh Romeo, where for art thou flavor? It’s right here baby, we’ve got the flavor. This once highly underrated smoke is now a staple for many, and I’ll tell you why. While the Nicaraguan and Honduran filler tobacco give it oomph in the taste department, the simply gorgeous golden Ecuadorian Connecticut outer leaf give this cigar a smoothness and creaminess that is just so damned inviting. The flavor profile gives off a very woody and nutty taste with a hint of cappuccino that lingers on the palate. I can smoke this medium-bodied beauty any time of the day.

It’s no secret that the boys from Asylum have been producing some seriously excellent cigars since their inception, and this 13 is raising a lot of smoky eyebrows. It’s a mild to medium-bodied stick that’s actually nice and spicy on the palate. Asylum co-founder, Tom Lazuka says they went through 15 to 20 blends before they got this one just right. The Honduran made gem sports Honduran Corojo and Habano filler tobaccos along with a Honduran binder, then covered in silky Connecticut-seed Ecuadorian wrapper leaf. This cigar is very toasty and so damned tasty.

It goes without saying that you just don’t think “medium to full-bodied” when someone is talking to you about a Connecticut wrapped cigar.  But when you hear the name La Flor Dominicana, you’d better think again. The peeps at La Flor are known, of course, for their ligero-laden powerhouse punches to the palate – so when it came time to drape their sticks in a lighter shade covering, flavor was an incredibly important factor. With potent Dominican and Nicaraguan on the inside and an Ecuadorian outer leaf, you get a smoke that is creamy and complex with very tasty notes of wood and coffee. THIS one seriously goes on the “must-try” list.

Erik Espinosa is one of the brightest up-and-coming cigar makers, producing a litany of great smokes from his La Zona Factory in Esteli, Nicaragua. And while he makes some delicious powerhouse sticks like 601 and Laranja, Erik proved he has a slightly softer side with the addition of Crema, a cigar that delivers big time in the creaminess department. Cedary, toasty and buttery are a few of the adjectives that describe this medium-bodied smoke filled with Nicaraguan leaf on the inside and plush, supple Ecuadorian Connecticut for the outer. Espinosa has nailed it with this one, people!

Connecticut wrapped cigars are the most widely smoked, but there’s always hesitation on the part of those who love ‘em bold. Listen guys, you just can’t let that light color fool you. These 8 sticks are not only high quality, but they’re loaded with taste and complexity and so worth giving them a try. How about sharing below your thoughts on these cigars, or other light wrapper sticks that you’ve enjoyed!

How about featuring some actual “Connecticut” wrapped cigars grown in the USA’s Connecticut River Valley? These appear to all be grown elsewhere. It’s no wonder a large plot of the Thrall Family Farm — which has been growing authentic world-class Connecticut tobacco for six generations — in Windsor, Connecticut is about to be sold for developing a casino.

CA Report: Cigar Tobacco From Countries That May Surprise You