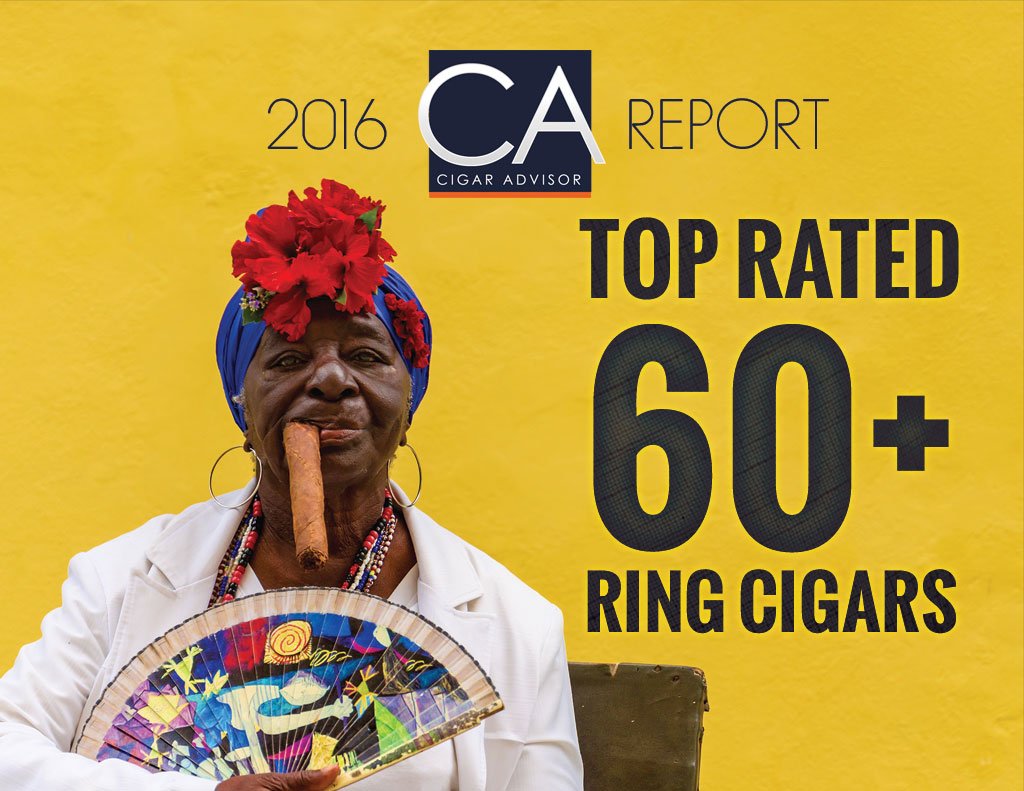 They say bigger is better, and boy am I ever giving you the best of the biggins! Over the past decade or so, the American palate has demanded bigger cigars, giving their beholder more burn time to enjoy the flavors of their favorite smokes. This gave birth to a wide array of chunky offerings from classic cigar lines such as Cohiba and La Gloria Cubana, while also introducing larger than life lines such as Asylum’s more than generous Gigantes. This is all due to our desire to get more for our money: more flavor, more smoke time, more relaxation.

And with this “more, MORE, MORE!” mentality, the super-sized cigar went from non-important novelty smoke to highly regarded regular for smokers across the U.S.A. Thusly, serious reviews followed, and customer ratings flowed like Niagara Falls. Now, 60 ring cigars may not be my cup of tea, but that does not take away from the fact that big cigars are still loved by the masses. That’s why I’m taking you through the 10 top rated 60 ring cigars and larger.

Each cigar on this list is based on cigar rankings and reviews posted by actual customers at Famous Smoke Shop. If a cigar is ranked a 98, it was ranked 98 by a collection of people who have smoked and rated the exact size I list in this article. The only variation to the actual results comes from me excluding repeated cigars from recently published articles, and repeated manufacturers in order to include more brands and more cigars. I also tried to make sure there were at LEAST 5 people who reviewed the 60+ ring cigars in question to ensure some yard gar doesn’t pop up, just because 1 person gave it a perfect score.

The La Palina Black Label Gordo weighs in at a manageable 6 x 60, and comes packed with that true rich flavor La Palina cigars have been known for throughout the industry, perhaps being the most beefy of all La Palina lines. The core is Nicaraguan/Dominican with a Brazilian wrapper that brings out truly remarkable complex flavors. While the Gordo may have only been ranked by a handful of reviewers through Famous Smoke Shop, this relatively new cigar is still turning heads. But what else would you expect from a head turning brand like La Palina?

La Flor Dominicana Double Ligero No. 660 cigars have taken full bodied cigars to the edge of nuclear. LFD has been known to make some powerhouse offerings, and these 60 ring cigars are no different. Rated an impressive 98 by a good deal of customers throughout the years, with one reviewer claiming it’s better than any $20-$30 cigar he’s ever smoked, be expected to greet spice, wood, coffee, and some naturally sweet notes as you work your way through this incredibly complex and luxurious cigar.

When I met Pete Johnson a few years back, I told him I had a 2010 Cojonu resting in my humidor and I was excited to give it a try. He gave me the best advice I’ve ever heard in this industry: “Dude, it’s a cigar. Just smoke it.” Solid wisdom from a wise man, I tell ya. But he’s right, and if you’re going to smoke a cigar, the Tatuaje Reserva Gran Cojonu is a solid choice. It’s certainly not an every-day kind of smoke. It’s more of a special occasion, sit-back-and-take-your-time-with-it smoke. And with a 6 1/2 x 60 vitola, you’ll have plenty of time to really relax with it.

I’ve written about San Cristobal before, but it’s always about the smaller sizes. I hadn’t tried the Papagayo XXL until just this past week, and I have to say, I think I liked it better than the smaller vitolas. It still features chocolate, nuts, espresso, and the like, but it seems as though I get a smoother/cooler draw from these 6 x 60 ring cigars. A truly pleasurable experience from front to back, and the customers agree.

Liga Undercrown cigars are extremely well crafted cigars made by the revolutionary Drew Estate cigar company. Each of these handmade treats is blended with 100% premium Nicaraguan longfiller tobaccos and a delicious Mexican San Andres wrapper, and you have the 97 rated gem that sits before you today. It puts out smoke like steam locomotive with a full strength profile, that I always felt isn’t truly full. You’ll feel it, but it doesn’t wallop you if you take your time and enjoy every puff.

A list of “Top Rated” cigars will undoubtedly have some of the best manufacturers the industry has ever seen within its ranks. So it should come as no surprise to see Punch make an appearance with the wildly popular Rare Corojo. For years it has been an incredibly popular choice for veteran cigar smokers, and it’s starting to really gain steam with newer smokers too. At a more than reasonable price point and a no-nonsense blend of Dominican, Honduran, Nicaraguan longfillers, Connecticut Broadleaf binder, and Ecuadorian Sumatra wrapper, this 6 x 60 blend is absolutely unparalleled in terms of smooth flavor and affordability.

A hefty cigar, indeed – and the longest of the three 60 ring cigars available in the line. I’m technically repeating manufacturers since both this and the Undercrown are made by Drew Estate, but I’m not counting it since they are technically under different brands. Like the Undercrown however, the MUWAT has a Mexican San Andres wrapper that is bursting with flavor. But that’s about all the comparison you can make between the two cigars, with the MUWAT featuring a massively full flavored and decadent blend of Nicaraguan and Brazilian longfillers that’s just perfect for an after dinner treat.

Everyone wants a piece of the motherland of modern cigars. I can picture it in my head now, walking down the street in Havana with cigar smoke wafting through the air as I listen to the chatter of men and women relaxing in the Sunday sun as children run around playing. It’s a scene that has been shuttered through diplomacy. But with La Aroma de Cuba, you can have a slice of the cigar safe haven. The 60 ring cigars named Valentino, made by My Father Cigars in Esteli, capture this essence through an all-Nicaraguan core and a Cuban-seed Mexican San Andres maduro wrapper.

How serious is the big ring cigar trend? So serious Ernesto Perez Carrillo has blended and dedicated an entire line to it. The Inch by EPC No. 62 clocks in at a 5 x 62, making this the shortest cigar on my list, but what it loses in length, it makes up for in flavor. A well-balanced mix of deep and rich flavors will flow from this cigar, with a slight sweetness prevailing the entire way though. I can try to tell you all I want about how you should try this cigar, but the simple fact that this entire line is dedicated to pleasing every big cigar lover’s palate, should make this a no-brainer.

Padron 1964 Anniversary No. 4 cigars are truly remarkable. It’s hard to even come close to the glory that is the 1964 line in general, but once you put it in a super-size-me vitola, we’re talking about close to three hours of that incredible flavor that has made customers flip their friggin’ lids over for years. The 6 ½ inch length makes the 60 ring gauge feel like you’re smoking more of a chubby Churchill than anything, while the jam packed tobaccos marry and blend together to give you a ride of incredible complexity.

Yes, the name bears relation to the cigar, and no, it isn’t the number 13. Asylum cigars decided to say “screw it” and make a monster of a cigar that looks as if it belongs in a store of ill repute. What really blows me away is this isn’t even the biggest cigar in the lineup! The 8 x 80 takes the cake, but it didn’t have enough reviews for me to legitimately list it. So we’ll have to go for the 6 x 80 instead. Using about all of Nicaragua’s tobacco crop to roll one cigar, the Eighty gives you at LEAST 3 hours smoke time, with some reporting smoke times of up to 4 hours. Whether you really like big cigars or you’re Indiana Jones trekking through a booby-trapped cave looking for the Maharaja’s lost treasure and need a torch to light the way, this is a must have cigar.

Fair warning to fact-checkers, pontifical journalists and other rules sticklers: I’m abandoning the criteria for this list to bring you quite possibly the biggest cigar you or I will ever see. This is the 11 x 90 Exactus Super Coloso, and it’s probably not a good idea to smoke it during your lunch break. In all seriousness though, some poor sucker actually rated this thing a 93, which means only one person is confirmed to have fully survived smoking one, and liked it! For that reason alone, this treasure, this crown jewel, this uncut diamond, sits in glory upon the list. Its shadow shall be cast upon those, dwarfing all under its majestic stature. For it is king, and it shall prove a worthy opponent for any who dare challenge it.

If you love big cigars, then I hope you liked the list. Again, these are rated by you, the customers. Cigar reviewers like attaching numbers to what they smoke in order to rank them from 1-25. While this can be seen as useful, that’s not how I do things. Instead, I believe the only numbers that matter are what is generated by those who spend hard earned money to buy and smoke a cigar after a hard day’s work: The average cigar smoker. Keep smoking, ladies and gents.

Mr. Jonathan,
I totaly agree with your description of the cigar smoking.I have a small request :will you please send me a copy of the young lady with the Big cigar without any writing on it ?I will frame it in my office.
Have a good day & einjoy ..Cheeeeeers..
A.Wahid
Bahrain

Dear Jonathan,
I am still waiting for your reply ?

you can buy her picture at http://www.dreamstime.com/stock-images-cuban-cigar-lady-image18058664

Reading Time: 4 minutes The most unsung heroes of our cigar accessories, hygrometers keep tabs on our stash so we don’t have to. Check out our definitive list of the best humidor hygrometers and discover how to choose one, adjust it if necessary, and learn why it’s more important than any other tool.

Reading Time: 16 minutes Hoyo de Monterrey cigars have been lining the humidors of cigar lovers for generations. Whether you’re a Hoyo devotee, or a rookie in search of a quintessential classic – click now to see the Advisors’ review notes for the entire Hoyo lineup – including AJ Fernandez and Excalibur selections!

The Rookie Cigar Smoker: Here’s How Not to Look Like One